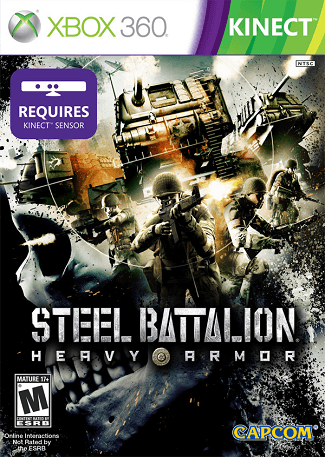 Overview:
When the Kinect was first announced it was met with much concern about what type of games would actually work on a system that involved motion controls with no controller whatsoever. Now since the Kinect’s release we’ve seen at least one or two games try to be something more than mini-game collections, exercise titles or dancing games, but even then those titles were lacking in a few regards.

Developed by FromSoftware many of you may remember that the first Steel Battalion was brought over to North America with what can be seen as the most amazing looking controller ever, as it contained twin joysticks, multiple switches, dials, levers and foot pedals that allowed the gamer to control every aspect of the mech. Enter Steel Battalion: Heavy Armor, a game which has taken that complex set-up and made it nearly all motion based. Has this transition worked fluidly to create a great Kinect experience?

Story:
In the not so distant future a catastrophic event called the Datacide has destroyed nearly all of the world’s electronics, microchips and various other advancements in science through some sort of unexplained means. The loss of all technology has thrown the world into chaos and now the United Nations has taken control of the world. However it seems that the United Nations now is pretty much China and they are nicknamed Uncle. 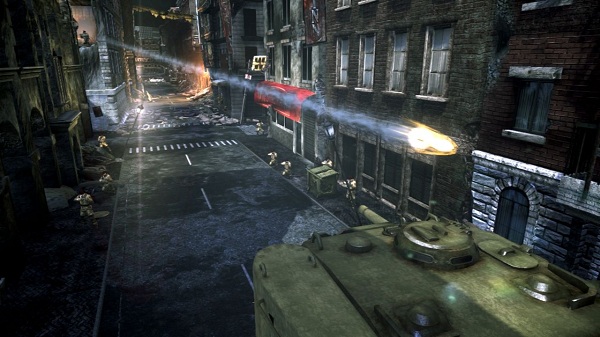 Players take the role of Winfield Powers, a man with a dark history of Uncle’s rein over the nation, who now is one of the best tank pilots in the United States. Now he has been placed in charge of a Vertical Tank, also called a Veet and will be sent on a number of missions which involve everything from destroying enemy bases, wiping out enemy patrols, destroying assets to the enemy and more.

With you is a crew of three co-pilots who help perform various tasks in your Veet, such as reloading, starting the engine and other things. As it stands the storyline is extremely predictable and full of so many war story clichés it is slightly ridiculous. The other members of your team tend to be comically bad as well, though you can also interact with them inside of the tank. This can either mean trying to pull in a panicking crew member or simply giving them a fist bump for a job well done. Though when the Kinect fails to read your simple fist bump motion, your co-pilot’s dejected and saddened face will mirror your own.

Visuals:
Thankfully the title makes up for visually what it lacks in storytelling. Players will spend nearly all of their time playing the game inside of a Veet and the amount of detail with various blinking diodes, information readouts and may make you feel like you are actually inside a futuristic steamworks robot tank. The tank itself will also incur various battle damages, such as dirtied, cracked or broken viewports or shattered parascopes which can severely limit your battle capacity. 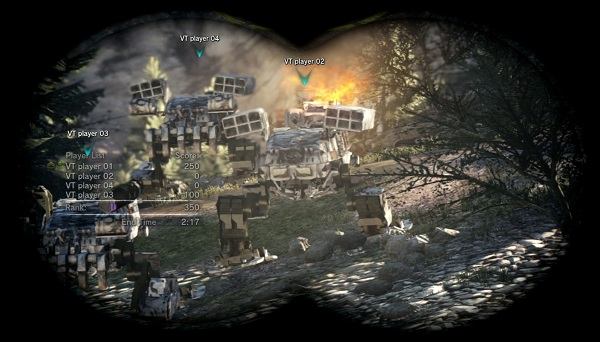 The battlegrounds you traverse are also varied well enough, though things do tend to become quite repetitive, especially considering most of the enemies you fight against are very static in appearance and will usually always look the same. This is quite problematic as well due to the fact that the title will take pleasure in making some enemies nearly invisible due to the lack of actual color diversity in the title, though whether you can either chalk that up to impressive camouflage work or poor design.

Audio:
If gamers had a nickel for every time a curse word was uttered in the first hour of the game then they probably could have paid the game off and more because there is so much swearing in Steel Battalion: Heavy Armor it simply comes off as unenjoyable. There are some decent lines of dialogue spoken and mission briefings, however for every single piece of interesting or even alright dialogue is a slew of uninspired tripe. 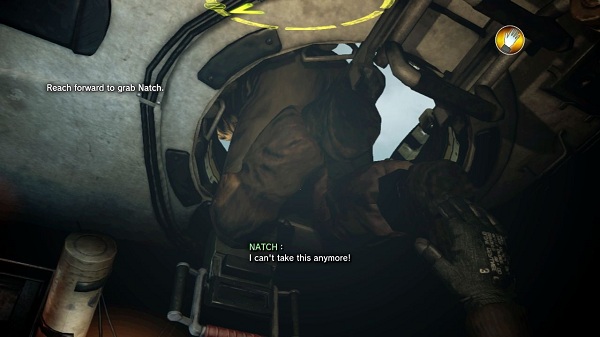 Thankfully the game’s sound effects are quite stunning as gamers may truly feel like they are in the inside of a moving tank as it rumbles over the terrain, bullets pinging off the armor plating. Explosions sound believable enough and the title does feature some rather nice background music when it actually plays.

Gameplay:
When it was first revealed and detailed, Steel Battalion: Heavy Armor sounded wonderful. It would be played nearly entirely with the Kinect with only a few necessary controller actions. Indeed that is what Heavy Armor does present the player. Throughout nearly every stage of the game players will be inside the cockpit of the Veet and will have to use their hand motions to flip various switches, switch between ammo types with virtual presses of buttons, and more. Players will even be able to stand up and look outside of the tank while using their left hand to activate binoculars in what truly feels like a cool gameplay element. In fact, the only thing the controller would be used for was basic movement and the firing of your machinegun and cannon. 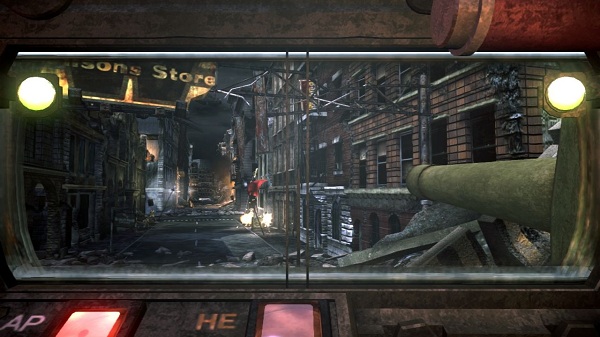 Now while everything else sounds like it should work perfectly and crate an amazing gaming experience, in the end the Steel Battalion creates what may be the worst melding of action and Kinect ever to be created. When players begin the game they are run through a number of tutorial sections and the game’s manual will even explain the most optimal sitting posture to make sure the game works perfectly. Unfortunately despite all of these warnings it is difficult to put into words just how awful Heavy Armor’s motion controls work while in action.

There are a few rare times that the game’s systems will legitimately read your motions properly and you can actually fly through the game’s rather short missions with ease, experiencing what should have been an intricate mech vs mech simulation unlike anything we’ve seen before. However nearly every other time players will be spending more time fighting their Kinect than fighting Uncle.

You see, there are a number of legitimate gameplay systems which are locked into the Kinect only, meaning that in the middle of combat players may need to switch ammo types, resulting in them having to let go of the controller (either making them immobile or unable to look around) and attempt to make the Kinect properly read your attempted reach and button press to switch ammo, all while your mech is being hammered with enemy fire. 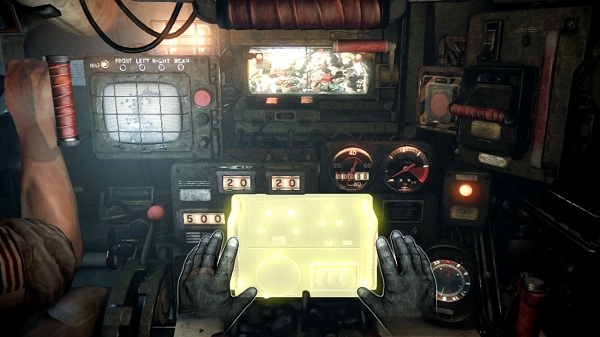 This would be a little excusable if it wasn’t for the moderate difficulty of the game as a whole. Player’s Veet can and will be destroyed with a few well-placed explosions, effectively disabled if your legs are blown off, or you can simply be killed by an enemy getting a lucky shot through your shattered viewport. Of course, you can try to close the shutter on the viewport but then the game will mistake your gesture for pulling down the periscope where you will then be killed. Oh and best beware of the self-destruct button as it seemed that Powers certainly didn’t want to live before turning on the mech’s headlights.

Interestingly enough, Heavy Armor does feature an online co-op mode that allows players to take on certain missions with other players, with ranks given depending on total points earned, though good luck finding others to play with. If you play these levels without a partner you are instead saddled with AI partners which will do everything in their power to fail and actually earn negative points, which lowers your rank. This is disappointing thanks to the fact that your rank will also reward you with customizable parts for your Veet, though most of these parts are only slightly helpful in the long run.

Overall:
It is truly disappointing to see what became of Steel Battalion: Heavy Armor as I truly wanted to enjoy and like the title. However after struggling for hours trying to manage the Kinect control scheme it ultimately became a battle against the game rather than the enemies on-screen. It doesn’t help that the game’s storyline barely serves as a structure for what is happening on screen. Ultimately if Steel Battalion: Heavy Armor is crushed under the weight of its own ambition, with a control scheme better suited for a controller than shoe-horned motion controls.