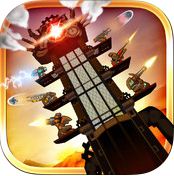 Tower Defence games come by the dozen and most of them are the same old thing over and over again yet people can not get enough of them which leads me to believe the developers of that sub-genre are doing some things right. I’m not a fan at all of those types of games and I am left wondering about what the appeal of playing a game of its type is, well the team over at Dreamgate alongside their publisher buddies at Chillingo have come out with this game; Steampunk Tower which, while it being a traditional-type tower defence game, has me somewhat intrigued and has got me re-thinking the genre. Read on to see my full review of the game. 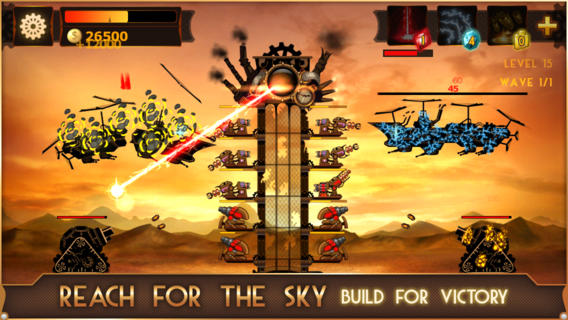 Like I had mentioned just above; it is a very typical and traditional tower defence game but don’t take that as a bad thing because I can’t honestly see a way to improve the genre as it seems like it’s pretty stable and well-rounded as it stands. You are given one tower and are attack from both sides of the tower, you earn money from kills which you can then use to buy more weaponry or upgrade the turrets you already have in action. There are a variety of different enemies to go up against, some with certain specifics, for example; one may be immune to electricity-based ammunition whereas another takes critical hits from the electricity-based rounds.

The thing I liked about this game is that, before a mission, you’re given just a small piece of information that tells you what you may be going up against and it allows you to change the way you were going to tackle the mission, very smart. Alongside various enemies are your weapons and their upgrades. Now I wouldn’t say that thee are various weapons because there are, essentially, only four; machine gun, heavy cannon, lightning coil and saw launcher. That isn’t a lot of variety but you do get to upgrade these weapons a great deal so, in a way, that eliminates the disappointment that comes with only have four unique weapons. With those weapons comes the Tower’s abilities which are directly controlled by you the player. 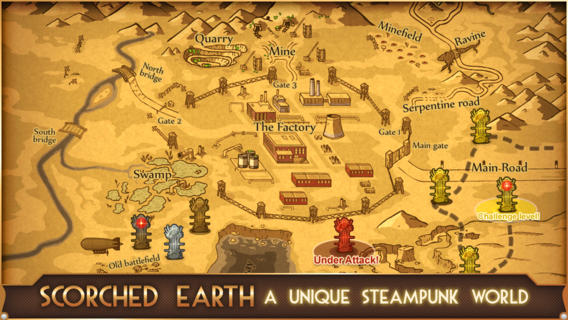 Abilities like “The Eye” wherein which a player literally controls a giant laser that takes out enemies, these abilities come at a cost of certain jewels that you will find in-game and are extremely helpful when in a bit of a jam. I didn’t often use them but when I did I felt that it was worth the wait.You rank up as you go through the game, getting high scores and beating the enemies in different ways and actually being promoted does do something for you so it is worth aiming for, it allows you more levels on your tower which means more turrets which, in turn, means more carnage.

You traverse a map through an old-west style town, there are challenge levels where it is similar to survival or you work under certain rules which, all in all, add up to your score and help you gain money to upgrade your weaponry and to help get promoted. The gameplay is very well-rounded, very stable and very fun. I have to say; I did get quite addicted to the game while reviewing it and I believe it was because it was so easy to pick up mid-fight and finish what I had started in my previous game sessions. For me, being able to pick up the game at any time and enjoy playing it is a necessary thing for an iOS game to have, this game has it and that’s what makes it great. 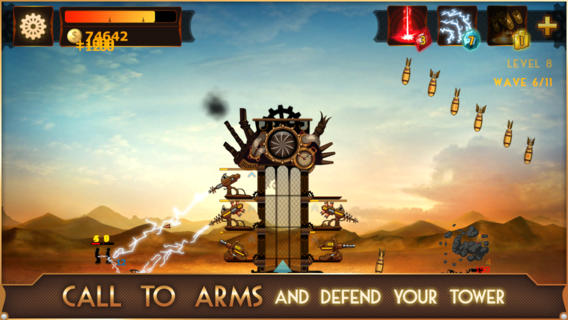 The game looks nice, it’s called “Steampunk Tower” and you truly believe it is. It looks the way a Steampunk-based game should and I think it’s fantastic. The colour-scheme is real earthy with a great deal of brown, dark orange and gold used throughout the game. The animation was great too, it was very fluid and you could really pick up on how much work was put into the game even though the enemies and, in fact, your turrets are very small. The one complaint I have about the game is that, from what I’ve seen, the background doesn’t change, your playing field doesn’t change, it is perpetually a baron wasteland and while that fits into the whole “Steampunk” deal, it did get boring to look at and ultimately had me disinterested. It is unfortunate but it is true and while some people may think I just havn’t played enough of the game, I’ve played 14 levels of it at this point in time as well as the challenge levels along the way and I’ve seen no change in environment. It is simply unfortunate for it to be that way but it doesn’t “wreck” the game, it is just something I picked up on. 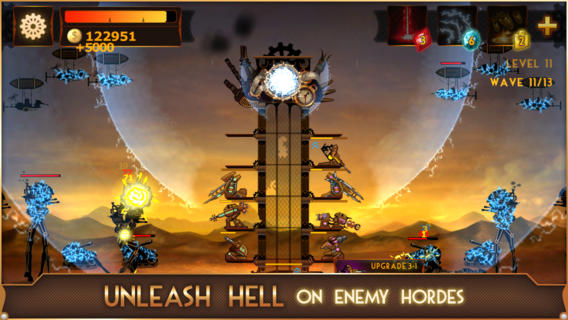 Audio-wise the game is simple yet effective! First of all the music is very well suited, the game is full of dated tracks that you would expect to hear in a Steampunk-style game and reminded me a lot of the music in Bioshock Infinite so you can see where I’m coming from when I say it was an accurate style to put within this type of game. On the battlefield there was no big music track, the best way to explain what it was is that it felt like something was always creeping up beside you. It wasn’t too loud, it didn’t take over, it was nice. The sound effects of the weaponry and the enemies both attacking and being killed were fantastic and it added to the gameplay, especially because of how satisfying the sound of destroying a tank was. It did a great job of keeping you interested. 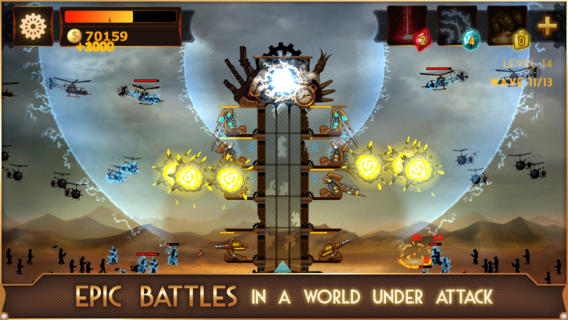 This game was simply fantastic, while it did nothing to break the mould of the genre it also wasn’t a terrible game. It felt like it was done right and, apart from the lack of scenery in the game, it was perfect. Each individual aspect of Steampunk Tower suited and complemented the others. It is incredibly well-rounded, incredibly fluid both in gameplay and in aesthetics and I found it fairly hard to put down after a session. I think Dreamgate have done a fantastic job on the game and, once again, Chillingo has added another great titles to it’s roster of great games. Don’t pass this one up at all, be you a fan of the genre are the total opposite like me, I think a wide audience will enjoy this one. 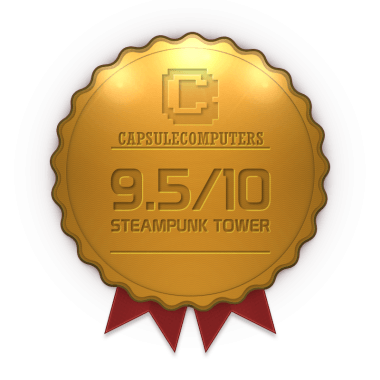