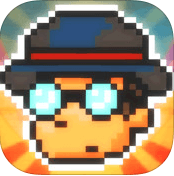 Platformers are the types of games that can really be enjoyed by anybody, they’re fun, they’re difficult and, most of the time, they look great. Monster Robot Studios have created a game for mobile devices that shoots all the way back to the basics of platforming but puts a spin on it, it is a game that is very similar to the Megaman series, so much so that the developers themselves have stated that the games are very similar, that’s not to take away anything too much from the game though because we see stuff like this all the time. A nice action/platformer with good controls and a lengthy story is exactly what mobile devices need, does Steam Punks make the cut? Read on to find out. 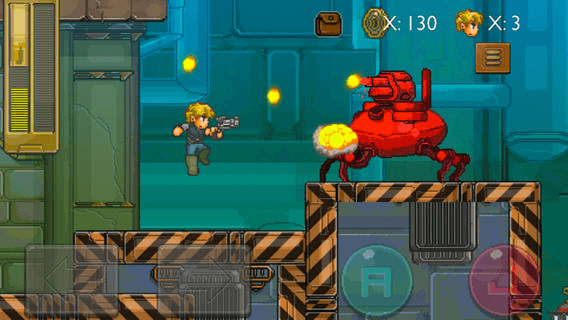 I want to begin by stating that I feel as though the story behind Steam Punks is a very basic yet good, it is both extensive yet small and works on a very fundamental level. You’re an Enforcer named Dunn Calhan who witnesses the theft of a great and powerful invention; The Grand Reactor. Now The Grand Reactor is exactly how it sounds, it’s a device that has many different uses but it’s most needed use is power, much like a normal reactor it generates power and can run cities, machines, anything you’d like, unfortunately the Bowler Gang have stolen it and it is now up to our hero, Dunn, to get it back.

That is basically the story layout for the entire game and, like I said; it’s not ground breaking but it isn’t nothing and it works for exactly what it is. You go around as Dunn Calhan, fighting your way through the bosses, all of which are incredibly powerful members of the Bowler Gang, as you attempt to take back The Grand Reactor and ultimately save the day.

What I enjoyed most about playing through the story of this game wasn’t so much learning why exactly the Bowler Gang stole the Grand Reactor, nor Dunn’s past, what I enjoyed was the locations it takes you to, the people you meet along the way and enemies you have to overcome to eventually save the day. It was pure adventure and it really felt that way, look I did honestly want more out of the story, I hoped that some particular aspects could have been fleshed out more or built upon, but no game can be perfect. Even its story was similar to that of a Megaman story, not in what the story had to tell but the layout of it; it gives you a reason to travel and to fight and, essentially, that’s all you really need. 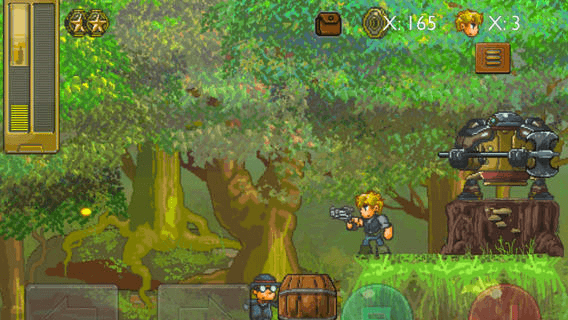 The way you go about playing the game is the same way you’d play any platforming game and while that may seem annoying to some I pose this question to you; “Why fix what isn’t broken?”, Megaman does it, Castlevania does it, Metal Slug does it, why change it? Mobile devices need a good platforming title and if it’s pure gameplay that you’re looking for I guess you don’t have to look any further.

You run, you shoot, that’s the bulk of it. Much like Megaman you have a health bar and the ability to scale walls by continuously jumping, you begin the game with nothing but a pistol yet the more boss characters you beat, the more weapons you get, in fact, you take their weapons once you beat them. What I enjoyed about taking an enemies weapon wasn’t just the satisfaction of utterly defeating them but it was also going back to other stages with the weapon allows you to break down certain walls and access different areas, it gives you a huge reason to go back and replay levels which ultimately leads to a longer gameplay time.

It is actually a very long game with a great deal of weapons to unlock by defeating bosses, there’s also a lot to see and if you’re good enough at this type of game you’ll be able to see them with no problems whatsoever. It is a difficult game, I’ll say that much, I died many times but I wasn’t too upset because you’re given a fair few checkpoints in every level so you can easily bounce back once you’re killed. There are so many crazily-designed weapons to unlock from mechanical gauntlets to gigantic swords, there’s armour to find an equip and just so many items to unlock that will help you get through the game easier. It has a very extensive set of unlockables for what seems like just another basic platformer, never judge a book by its cover I guess. 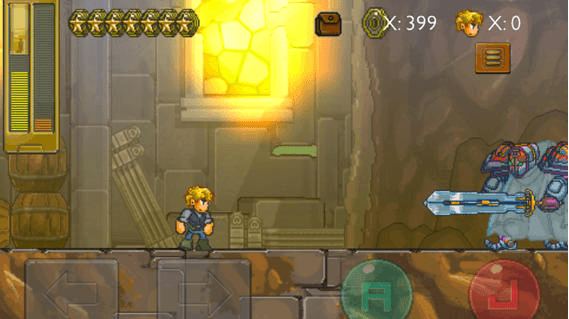 Visually this game has its ups and its down, for every great looking piece of scenery or enemy there is a dodgy piece of scenery or enemy, it just seem to goes both ways, luckily it’s easier to focus on the good rather than the bad. A great deal of the enemy characters are very reminiscent of the Megaman games, I know I’ve spoken a great deal about Megaman in this review but when the developers have clearly stated it was their inspiration it’s hard not to.

I have to say though the animation throughout the game was actually done very well, it was fluid in motion and it seemed to have a certain flow about it. Scenery looked beautiful, it would have to be the best aspect of this game visually. Some character and enemy sprites didn’t look to well but for the most part the developers did an incredible job. Colours throughout the game are very earthy which isn’t a bad thing because it represented the Steampunk sub-genre in a very good way. One thing I have to say though is that the dialogue boxes throughout the game were oddly out of place and incredibly hard to read, they were yellow text on sky blue text boxes. 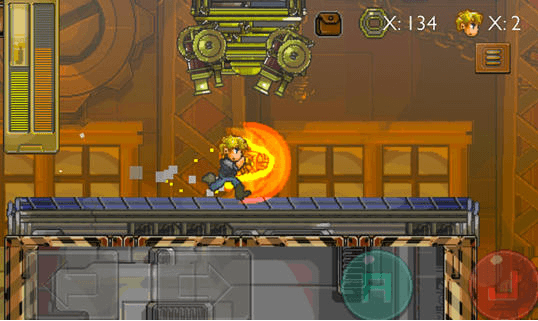 It didn’t fit into the colour scheme in any way and caused a slight visual illusion that put a certain small strain on the eyes, it was nothing too huge but it was entirely noticeable. Characters were designed well, clearly the developers did their research into the Steampunk genre because they represented it very well. While the sound effects were good in this game they didn’t leave much of an impact on me, not when I was quite taken by the music that played throughout the entire game.

Steam Punks has a soundtrack that is made up entirely by chip-tunes, 8-bit sound populated the title and I really couldn’t have thought of any type of music that would have been a better fit. I found myself turning the sound up on multiple occasions despite my public location simply just to hear the music. This would probably have to be my favorite aspect of the game in its entirety and I think because I believe a good soundtrack really does make the game. The sound effects were very traditional, a great deal of “bleeps” and a fair amount of “bloops” which is exactly what you’re looking for in a game that longs to be a retro title. 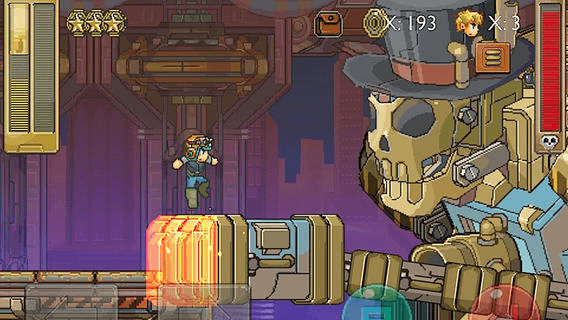 Steam Punks is an all around great game, it IS lacking in several different aspects but as I’ve already said; no game can be perfect. It brings Megaman-style platforming to mobile devices in a way that has surprisingly never been done before. The controls are tight, the animation flows and, for the most part, it looks pretty good. If you’re a fan of platformers than I guarantee you’ll love this game, if you’re a fan of the Steampunk genre than you too will enjoy this game, it really is a title open to a wide audience.

The quick way to enjoying Steam Punks is to look over the fact that it has flaws and to just play it for what it is; a brilliant platforming game set in a Steampunk world, any deeper thinking and you will find that you’ll look for reasons not to enjoy yourself. Monster Robot Studios have done a great job in creating and developing this game and I honestly cannot wait to see them hone their talents and their styles and, one day, make a perfect game, for now though we can all enjoy the simple fun that is Steam Punks.