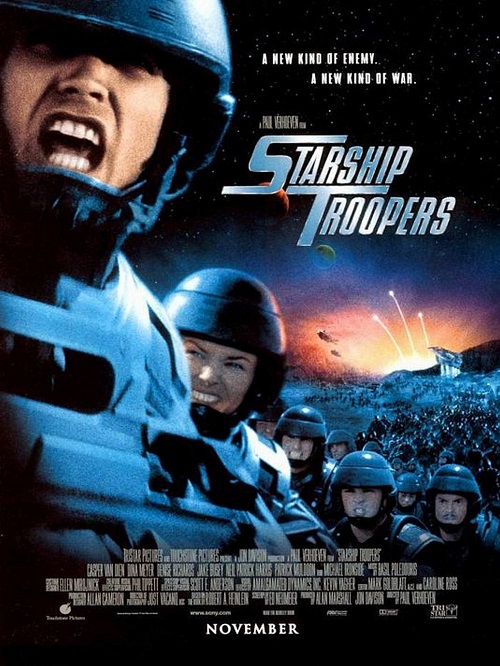 Paul Verhoeven is a staple of sci-fi geeks everywhere with Robocop and Starship Troopers being his two most beloved works. I’m already a big fan of Verhoeven and of Starship Troopers, so I jumped at the chance to watch it up on the big screen. I strapped myself into my power armour and marched on down to George St cinemas to watch the In the House screening of the film.

Our MCs for the evening were Jason ‘Jabba’ Davis and David ‘Quinny’ Quinn who opened the proceedings by offering people cake because it was Quinny’s birthday (of which yours truly took up the offer). After a quick of rendition of “Happy birthday” the two settled down to discuss some of the film’s trivia. A funny little titbit that I remember from their exchange was that during the film’s production, Neil Patrick Harris (yes, that one!) appears in the film dressed quite noticeably in a costume that resembles the uniforms of Nazi SS officers and earned himself the nickname of “Doogie Himmler” on set. 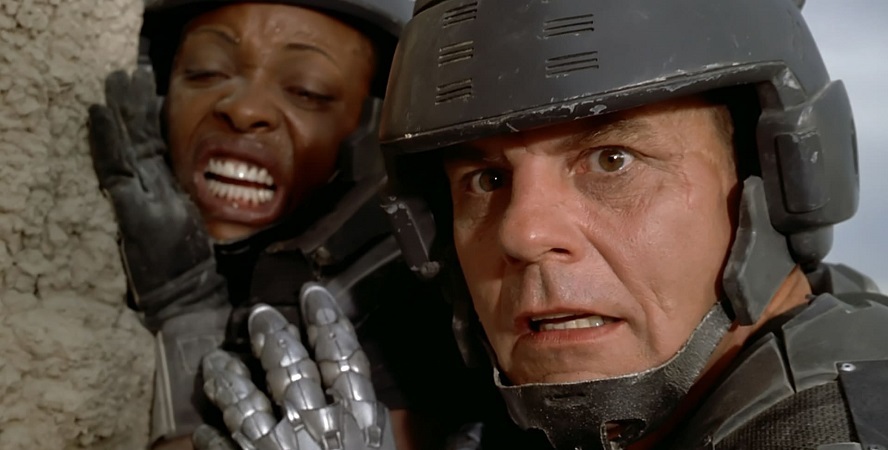 The story follows idealistic and fresh-faced high school student couple, Johnny Rico (Casper Van Dien) and Carmen Ibanez (Denise Richards), as the leave high school and join the military to fight for the federation. We see Rico undergo a gruelling time through basic training for the mobile infantry while Carmen has a somewhat more idyllic experience at flight school training to be a pilot. Their lives both turn upside down when a meteor from a planet populated by giant insectoid creatures crashes into their home town of Buenos Aires and the federation is kicked into war. As each contributes to the war effort, will they survive the confrontation between a fascist humanity and an insectoid alien foe?

Straight up, I will tell you now that this film features some of the hammiest performances and dialogue I have ever seen. The film really kind of has two aspects to it’s story; one side is high school melodrama with characters getting into vapid relationships, love triangles, and the highs and lows of navigating a social hierarchy. The other side of the story is a sci-fi military action film with buckets gore, guts, and ichor. If you think that this is a bit of a mismatch, then you have not fully grasped the unholy fusion of these two completely disparate genres with the action elements far outshining the teen melodrama. The writing comes into its own with the little worldbuilding propaganda vignettes intermittent throughout the film (but more on that just a bit later). 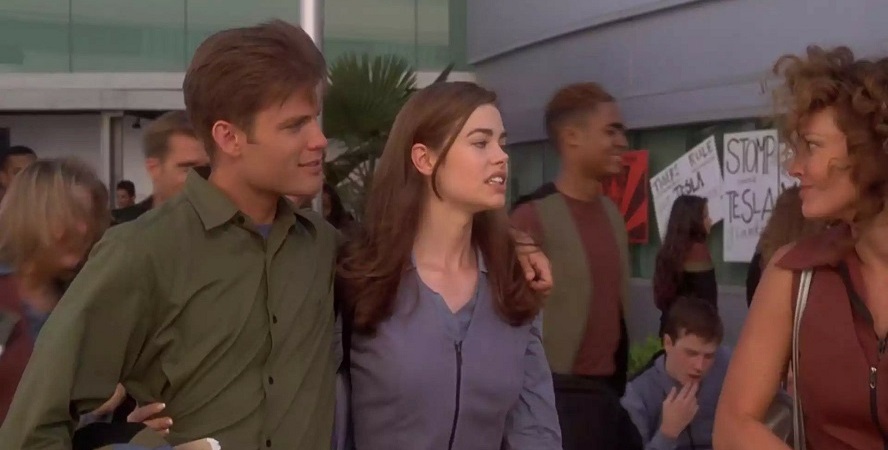 There is almost not a single moment of anyone’s performance which was believable or nuanced in any way. Van Dien does all right as a fresh-faced teen but really doesn’t have the gravitas to pull off any kind of growth beyond that when he assumes command of a squad. Alongside Richards, we find that the main romantic couple are a pair of the film end up coming across as empty and vacuous shells of human beings… which may have been the reason they were cast. The two exceptional performances come from Michael Ironside and Clancy who lean into the absurdity enough but do it so straight-faced that it straddles the line between farcical and badass with aplomb. The reason that the film’s performances and screenwriting are so stilted may in fact have been a feature instead of a fault…

The main draw for this film is not it’s threadbare narrative or two-dimensional characters but rather it’s multi-faceted fictional world which forcefully captures the imagination. The society of this film is basically the utopian ideal of Star Trek but with a distinctly fascist overtone throughout. In terms of science fiction, the film doesn’t want to explore the complexities of technology or grapple with the philosophical dimensions the human condition beyond; rather, Verhoeven wants to explore fascist society when taken to a logical (and farcical extreme). The Federation of Starship Troopers is a vile, xenophobic and cruel society which features some of the worst excesses humanity is capable. Most of the comedy comes from these frankly ridiculous extremes in the film’s various propaganda vignettes where we might see an infomercial where children gleefully play around with assault rifles while in another we’re given the outcome of a failed military venture where over a quarter of a million humans lost their lives. 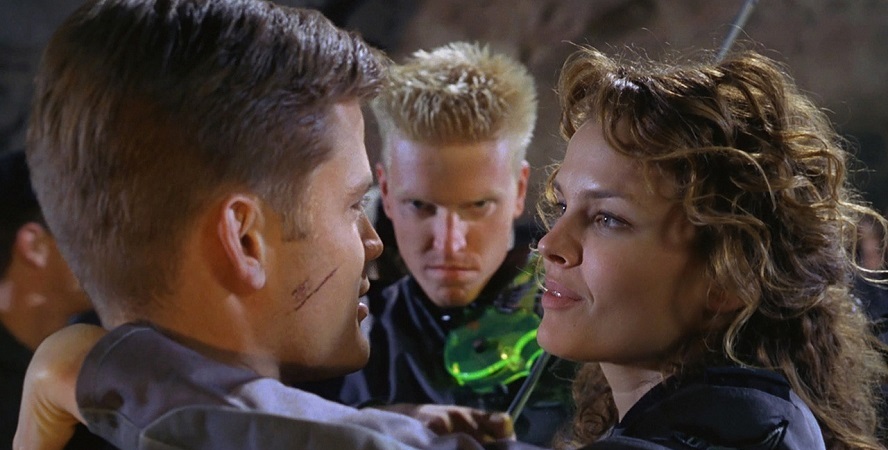 Depicting an entirely alien society, however, would probably not have given the film the lasting appeal it has enjoyed for the last two decades. What gives this film it’s unique flavour is the way that it works to make the reprehensible jingoism and militarism of this society seem completely mundane. For an audience, you are distant enough away from these excesses so that you hopefully them funny in line with the film’s very dark gallows humour (my favourite kind). But in that laughter, you will find that there is an element of recognition as well as the film draws upon every cliché from every war film under the sun. Characters will recite one-liners as heroically and this is enough to get the blood pumping as well as action movie which you might see playing in the cinema today… but there is the ever-present knowledge in the back of your mind screaming that our so-called heroes are fascists; the gung-ho action you’re watching is fascist propaganda; the film is simultaneously jarringly alien and yet eerily familiar.

The film’s ultimate thesis is not simply to ridicule the excesses of fascism but also to hold up a mirror to our own culture and society and point out some similarities which are more concerning than funny. I’d argue that this is what makes this film a great satirical piece and how it’s popularity and relevance remain despite the march of time. 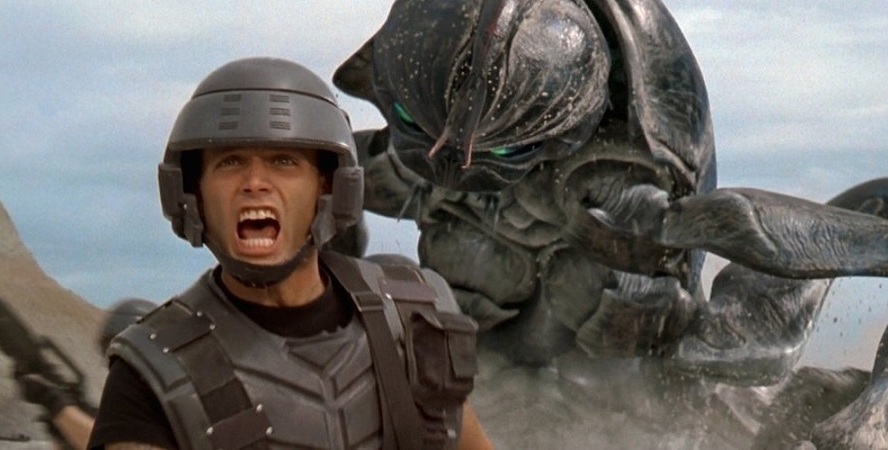 Verhoeven’s style as a director shines through brightest in the incidental details that he puts in to the film to really hammer home the fact that the federation are fascists, and this is a terrible timeline. These flourishes can be as small as just the costume design of the characters evoking Nazi uniforms, or the more in-your-face war propaganda newsreel feel of the vignettes that appear throughout the film. It’s great visual direction but it’s often a slog to get to these moments through otherwise visually uninteresting film. Unfortunately, the film’s CGI effects have not particularly stood up well against time’s advance. It’s not something which particularly broke my enjoyment of the film as an already established fan of the film… but more astute newcomers might notice some pixilation in some of the effects (especially if you’re watching it on a big screen). 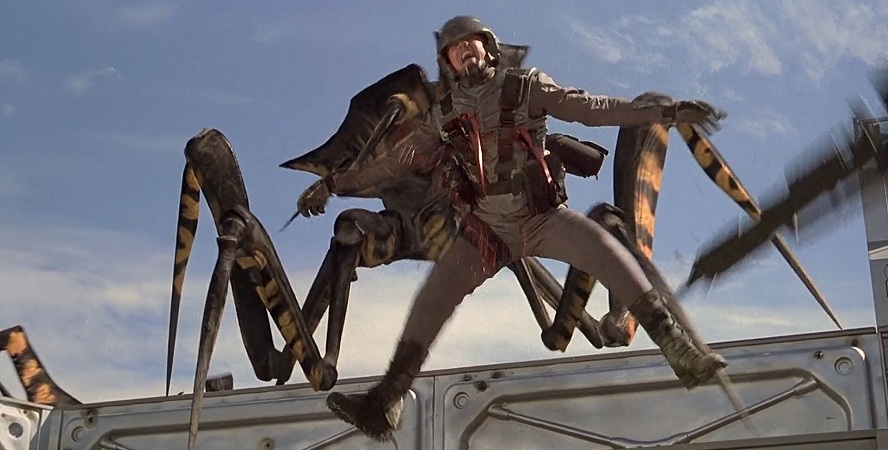 The film’s orchestral soundtrack largely plays up the themes of militaristic fervour with all the uplifting pomp that entails. A lot of the film’s soundtrack plays with this militaristic theme with plenty of marching drums and brass to pump up the action and evoke the feeling of a military parade. Although this certainly plays into the film’s themes and punctuates most of it’s action beats; it doesn’t really leave much of an impression on you after the film’s run time. The couple of exceptions to this are several pop songs used in sections where the film veers towards teen melodrama more than the military action. The songs feel a bit of place in the same way that these sequences in general feel out of place in the film but, as I’ve mentioned before, this film makes hay out of its eclectic choices which ultimately work together in spite of it all. 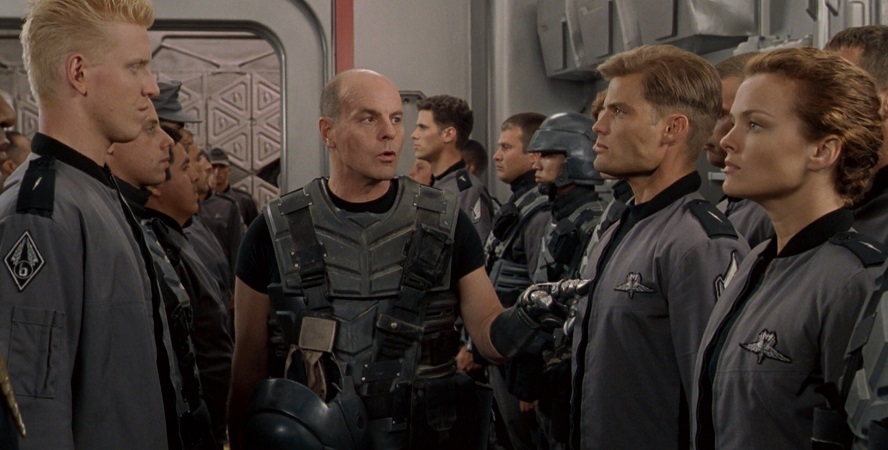 Overall, I had a really good time with this film and I’m glad I was able to see it up on the big screen in the cinema. Part of the film’s lasting appeal is that it’s capable of being so many things simultaneously which it ultimately is able to bring together in an interesting but unusual way. Verhoeven’s attention to detail ensures that the film’s visuals (both subtle and not) give you plenty of cues as to the tongue-in-cheek nature of the film’s satire. The orchestral and pop song soundtrack are similarly odd pairings that ultimately add to the film’s off-beat tone and charm. All these disparate elements come together in a way that I can describe as inspired; this film will no doubt be relevant for some time to come and I heartily recommend it to anyone who appreciates dry and dark satire.

For other films which In The House is screening, feel free to check out their schedule for the season here.
Capsule Computers review guidelines can be found here.

Starship Troopers is a scathing dark satirical masterpiece masquerading as a brainless science fiction action movie and absolutely worth your time.
9