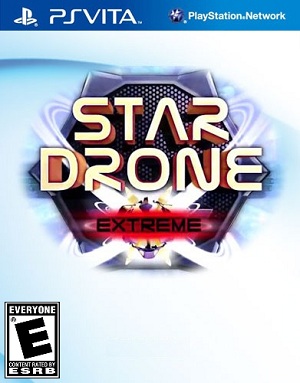 Overview:
If you happen to be a fan of playing little games from the PlayStation Network on your PlayStation 3 then the name StarDrone is probably quite familiar to you as it launched on the PS3 last year and multiple other platforms since then. While all those other titles may have simply been ports of StarDrone, developers Beatshapers have chosen to give their game a little bit of an upgrade for its release on the PlayStation Vita.

Visuals & Audio:
Surprisingly enough, StarDrone Extreme has actually seen an upgrade to its visuals with its transfer to the PlayStation Vita as the game looks better than it originally did on the PlayStation 3.  Interestingly enough, the PlayStation Vita can also handle playing StarDrone Extreme at maximum speed without any visual errors or hiccups in framerate which is quite impressive. The level designs themselves contain plenty of flair with a variety of colors as well as enjoyable level design that is both great to look at and frustrating at the same time with their level of difficulty. 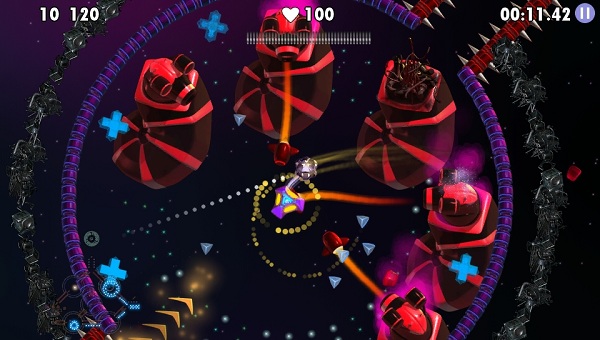 While StarDrone Extreme’s visuals may be varied, the background music and sound effects unfortunately are not. While not horrible by any means, there are only so many songs provided and sound effects to listen to, thus they become repetitive very quickly which is truly a shame.

Gameplay:
StarDrone Extreme is far from an overly complicated title and this ease of access makes for quite a welcoming package as puzzle fans eagerly advance through the first few stages and learn the basics of the game. StarDrone Extreme offers sixty different stages to try out, ten of which are exclusive to the PlayStation Vita version of the release, and among these stages there will be various ending objectives. These can range from simply reaching the end of a level, collecting fragments of an object or simply highlighting all the stars on that stage. 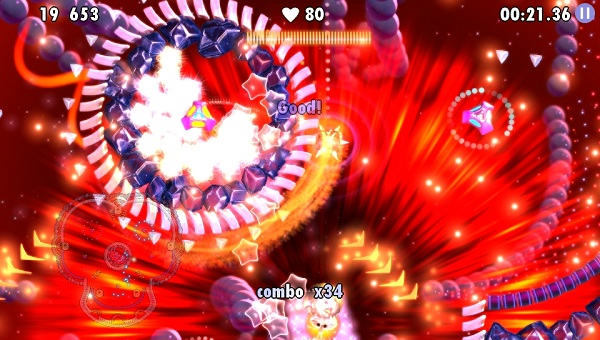 Players will do this by launching their ship into space and controlling it through a number of gravity wells layered throughout that stage. The game is extremely simple to control at the basic level, as you will have direct control over which direction you want your ship to launch and everything after that depends on the gravity wells layered throughout the stage and various obstacles in your path. These gravity wells when activated will alter your ship’s course as it spins around the well, allowing you to not only increase your momentum but also change direction on the fly.

Everything in StarDrone Extreme is controlled through simple touches of your finger. This includes aiming your initial launch and then pressing on the screen to activate the nearest gravity well to snag your ship. That is all there is to it. While this obviously means your fingers will slightly be blocking your vision, they won’t cause too much of a hassle.  In fact, the touch based system makes the game very easy to control and simple to understand. There is also the option to use the rear touch pad to control your ship as well, though method feels less accurate and many will choose to use the front touchscreen instead. 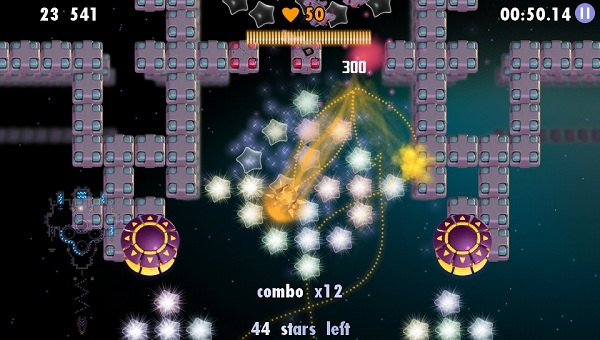 That is simply all there is to it, no matter what your objective is per level. It is worth noting that there are plenty of ways to fail these stages however. If your ship happens to fly off course or lose too much momentum it can be sucked into a black hole causing failure, or you may die due to crashing into too many spikes and losing your health or even dying to various enemies that can only be defeated when your ship has collected enough stars.

While most levels don’t feature an extremely high level of difficulty, the game is quite challenging at its core. In fact, every few levels players will encounter a stage where the difficulty spikes significantly. The strange thing is, after these difficulty spikes the difficult will then drop to its standard level. While this may have simply been a way to give player’s a challenge there is one other inclusion to the game which reeks of possible exploitation. 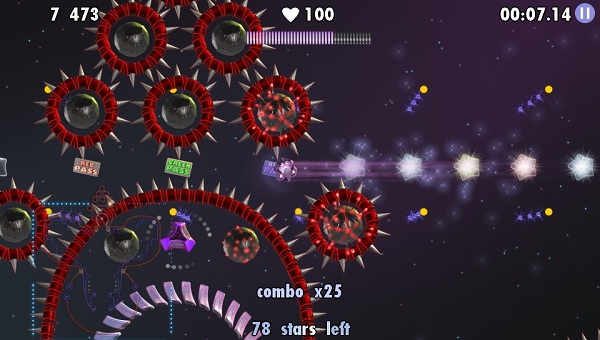 To be quite honest, StarDrone Extreme only runs at a cost of $3.99 on the Vita’s PSN which makes it an incredibly discounted title so there is plenty of leeway here. However there is one feature which is not only annoying but obtrusive as well. Alongside StarDrone Extreme in the PlayStation Store there is also a “level-skip” DLC that costs $.99. While not an issue on its own, the fact that the game constantly pesters you to buy this content is quite annoying.

After the player finishes the first twelve levels of the game, any failure after these levels will bring up a prompt asking if you would rather restart or skip the level. Anytime the player presses skip the PlayStation Store will be opened and players will be asked if they want to download the $.99 DLC. While not overly obtrusive, it is strange that such a piece of DLC was included. It is worth noting that this DLC has been made free in the European version of the game, but at the time of this review it still costs $.99 in North America.

Overall:
StarDrone Extreme’s PlayStation Vita offering not only adds ten more levels to what fans of StarDrone already loved, the well implemented touch controls make for perhaps the best way to control the game. Being a portable gaming device, the length of each of StarDrone Extreme’s stages are perfectly designed for a quick gaming session whenever you have to wait for a brief period as each stage usually lasts only a few minutes. With great visuals and the cheap price of only $3.99 StarDrone Extreme contains plenty of content that is only marred by odd difficulty spikes and bland sound effects.