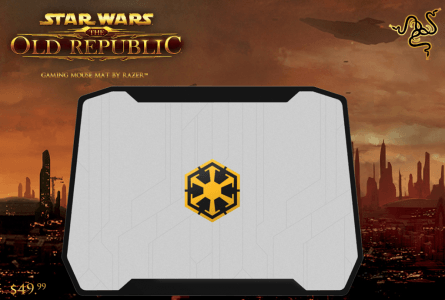 Gamers of the world, I have a question for you. How do YOU augment your video game experience in reality? Some of you may choose to take your latest FPS skills online, and test your mettle against the global collective. Some of you may form communities or guilds based on your common game interests. Some of you could choose to attend any number of conventions. But chances are, MOST of you will engorge yourself with bits and pieces of gaming memorabilia to decorate your room, your study, your game-room, command centre or Bat-cave.

Now, if you’re anything like me, odds are that you too have several limited edition gaming items strewn about your place of play. The statue of Skyrim’s Alduin sitting proudly atop your bookcase. Halo’s Noble Team guarding your comic book stash, and your surplus controllers sitting comfortably in your Uncharted 3 satchel bag. Some of them exist purely for decorative reasons. Then there are the others you choose to augment your game experience.

As many gamers who frequent any number of local games shops should be aware of by now, 3rd party hardware and peripheral developer Razer has seen quite a degree of success in the modern gaming market. This is courtesy of their extensive range of gaming products that serve the afore mentioned purpose of augmenting the gamer experience. Even if you do not own a Razer product, you have probably heard of them or at very least seen them in a shop window. Most will know of them from their distinctive dark black and fluoro green logo and box art, reputation for quality and the sleek, gamer appealed design of their controllers, mice and keyboards.

Recently, Razer has thrown its brand behind in support of the launch and growth of one of the most hotly anticipated and received MMORPG’s of all time. With the takeoff of Star Wars: The Old Republic a relatively large success, despite some international localisation and server difficulties, fans such as myself have been more than a little eager to see a range of SWTOR based merchandise released. 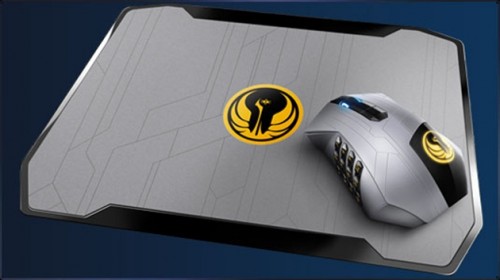 I was fortunate enough to get my hands on one of the SWTOR pieces that Razer has released in their latest line of gamer merchandise. The Razer SWTOR mouse-pad.

Before mentioning anything else, I should point out that the appeal of peripherals such as these are liable to vary.

As the mouse pad is most certainly an aesthetic piece, the most important thing to immediately review is its physical design. Breaking away from their traditional colour scheme, Razer has dropped the usual black-green colour product colour scheme in favour of a more contextually appropriate White-Gold-Black. The choice in colour scheme I feel is highly appropriate given the sci-fi nature of the universe. The design is simple and straightforward, just as many of us assume that futuristic or space age tech should be. This mouse pad also offers a customisation option. It is possible to alter the faceplate of the mouse pad. The white face-plate is actually 2 sided and provides players the option to flip the plate around to display your in-game allegiance. The plates display the symbol insignia’s that represent the Sith Empire and Galactic Republic. Alliance and Horde? Eat your heart out.

Both the plates and the frame carry a considerable deal of weight. As a result, players shouldn’t expect to experience any of that frustrating mouse pad movement that comes packaged with many generic brand mouse pads. The solid surface also provides a satisfying sound and feel to mouse actions. Consider it like driving a car. Sure, driving on a rocky unstable surface is do-able, but doesn’t it feel so much better to drive on a nice solid asphalt road? This comes courtesy of the non-slip anti-reflective coating on the surfaces of the mouse pad tiles. The abrasion resistant coating is also as much an indication of durability as it is functional. So users should expect to get plenty of use out of thier purchase.

The mouse pad is also sizably larger than many of your standard mouse pads, which, combined with the afore mentioned coating features, supports rapid mouse movement for those instances in which battles in SWTOR become hairier than Chewbacca. As an additional result, players will find that extra range of mouse motion will affect keeping gameplay focused and precise, regardless of one’s preference in sensitivity.

As one might expect, functionally, the mouse pad will not influence your game directly, like a mouse or headset might. However, this is not to say that it doesn’t make a difference to the game’s overall feel and tone. The mouse pad allows mice of any make or design to flow about smoothly. (Even old roller ball mice). This honestly surprised me. 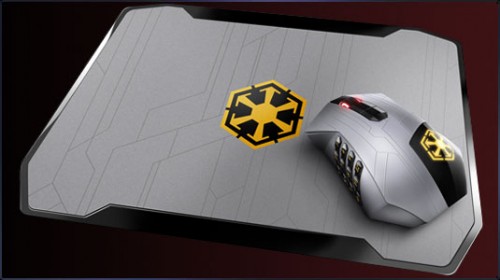 When first tasked with the job of reviewing a simple mouse pad, I thought to myself “how will it REALLY make a difference to MY game?” After all, playing through an MMO as expansive as The Old Republic is all about how the player perceives THIER story and THEIR adventure. It is an individual undertaking just as much as it is a social one. Being able to truly immerse oneself in the game is what provides that lasting feeling of connection to the universe. As such, a strong sense of satisfaction and pride in our achievements is also developed.

The difference the mouse pad made to my game was subtle. Sitting at my desk in my room is an environment I’ve become all too familiar with. Sitting in that lone chair I have recently saved the Planet Sera from destruction, adventured through the northern reaches of Skyrim, relived the life of Sonic the Hedgehog and survived the zombie apocalypse. However, when I now take a seat at my PC, I find my eyes immediately drawn to the features at my desk, of which the new mouse pad dominates in contrast. Each time I envision that THIS is how people use computers in the Star Wars Galaxy. The mouse pad provides a feel that it has come directly out of the universe of its subject matter. The result for the player is an increased level of immersion, and a greater feeling of connection to the world. And for both a game and peripheral based on open choice and player centred, creating this sense of belonging is what will keep your players stuck to the game. Ultimately it achieves what a simple aesthetic like this is meant to. A better immersion experience for the player.