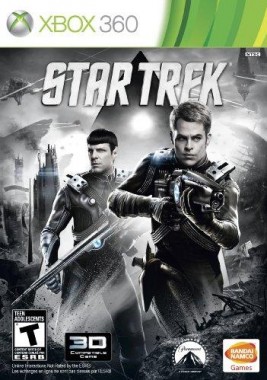 Overview
Resident Evil 5 was and still remains to be one my favorite games of all time. Sure, it has its critics, but the co-op experience in my opinion has been unmatched, and even with a computer player controlling Sheva, I still had a fantastic time. Why am I comparing that game to something like Star Trek? Well, Star Trek has been promoted as a co-op driven adventure in space, where players take control of Kirk and Spock with a brand new storyline in tow. Maybe it was my own expectations here, but I kind of thought of this release as Resident Evil 5 in space. Digital Extremes have been known for putting out some decent romps on consoles before, and there was a lot of reason to be hyped for this game – licensed or not. Does this game live long and prosper, or should it be fed to the Gorn? Let’s find out.

Story
Star Trek comes with a brand new narrative, taking place right after the first flick of J.J. Abrams’ stylized reboot – and just before Star Trek Into darkness takes place. Yeah, it’s one of those in the middle type stories, but that isn’t always a bad thing. This time, Kirk, Spock, and the rest are tasked with a new evil known as the Gorn. Yes, that Gorn from the original that had zippers on the back of their costumes. Are the zippers back? Well – no, but this terrible threat doesn’t really come with an engrossing tale, so all of the new work Digital Extremes put into this plot feels a bit wasted due to the lack of true substance. 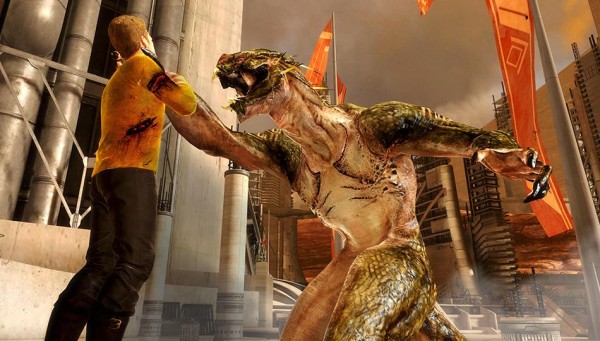 Let me explain that point. This title doesn’t really work in chapters, as it’s usually just one mission after the next, with kidnappings, chases, and everything in-between taking place as you make your way throughout the game. The plot itself is genuinely interesting, and there are a lot of nods to the television series to take in, but as a whole – the pacing never truly lets the player feel attached to this vivid universe. Remember in Mass Effect how the world expanded after every mission, and every character had their own purpose? Well, Star Trek is the opposite. Every time something interesting happens, the player must get through tedious levels in order to see the plot unfold, and the results of doing so usually lead to a drab result due to padding and filler used to simply make the game longer. Sure, there are genuinely exciting moments here, but they are so few and far between that it makes the game’s tale feel boring for a hefty chunk of the experience. 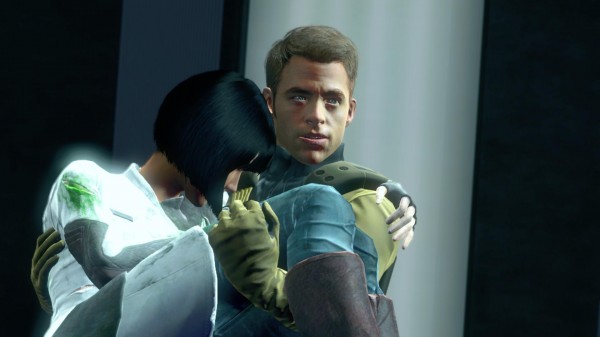 I shouldn’t have to feel like I want to finish a level just because there is something better around the corner, and when I do make that turn, why is it that I then have to perform more tedious chores to see the end result just extended upon? This plot is very unbalanced, and rewards the player little for their efforts – instead using filler gimmickry to keep the player invested. Star Trek may be based off a movie that is based off a television show, but you cannot create a game with that type of foundation that is only around ten to fifteen hours to start with. What you are left with is a sweet piece of chocolate with a hollow center, only satisfying players at the beginning and the end of their journey – with a big center of nothingness in-between.

Gameplay
I wish I could say the gameplay makes a lackluster story worthwhile here, I honestly do. Sadly, that is not the case. In many ways, Star Trek plays like a good percentage of the modern third-person shooter fare on the market, and mostly – this works just fine. Players have a small little inventory of weaponry, and players can pick up the enemies’ own stash once defeated to slightly broaden things out a bit. Shooting is fairly basic and does it’s job, but never brings us anything new to the table. Every stage just usually consists of walking, a bit of stealth, shooting the enemies, and a mediocre boss battle that ends an area on a sour note. Sure, killing enemies like the Gorn is an easy task, but it comes with little reward other than a weapon that shoots with a different color or a level upgrade that adds very little to the experience. 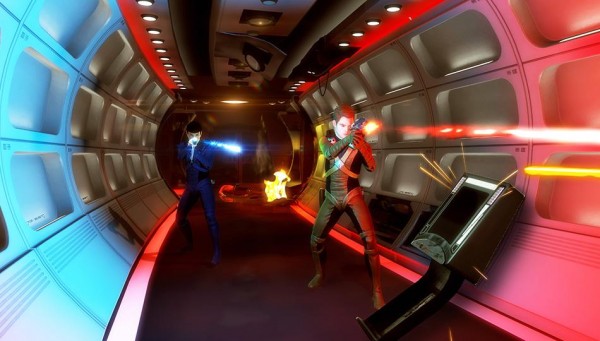 Other than the whole third person-shooting aspects, Star Trek also tries to take it’s gameplay stylings from successful franchises like Uncharted, Dead Space, and Mass Effect. Sounds like the recipe for success, right? Well, it could have been with more time, but these mechanics feel way to rushed to actually be enjoyed. Some sections of the game require Kirk or Spock to jump on a ledge and hop to the next, hoping to add in some action. Most of the time however, Kirk is sluggish while on the ledges, and will over-hop his boundaries entirely, falling to his death after a jump goes terribly wrong. Puzzles are also a thing, but are poorly implemented. Imagine if Mass Effect’s connect the fuse puzzles were at every single door, but were almost the same exact puzzle every time. That is what you get with Star Trek. Move the analog, pick a signal – repeat. Enemies also pop up randomly while you are doing these, and it can be a pain to have a foe behind your back, shooting one pellet at a time as you try to do a tiresome door puzzle. 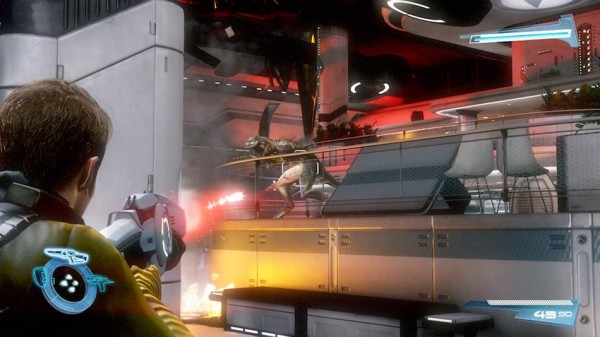 With all of those features aside, the promising co-op aspects could have saved Star Trek from going into a black hole. Sadly, and yet again, we are let down by a massive disaster in this area of the game. You see, just like Resident Evil 5, you always have a co-op partner. It is your choice to choose Kirk or Spock to play as, but each differ little from each other so the choice comes with no value whatsoever. Making matters worse is that those who go in solo will have to deal with one of the worst AIs of this generation. In my game, Spock was my partner. As an example of his standard stupidity, there was one stage where we had to open a door together. It should have been an easy task, as you know – it’s just a door. So there I sat, “Waiting for Partner” at the door. Five minutes pass, and still no Spock. I finally decided to go look for him, retracing my steps through the ship. I found him running in place, as if he were on a treadmill. I thought walking up to him would bring him out of this glitched state, but as I walked up to him, my body went right through his model, as if he were a ghost. He then snapped out of it for a second, only to spiral off the map, never to be seen again. At this point the only option was to reload my last save point. 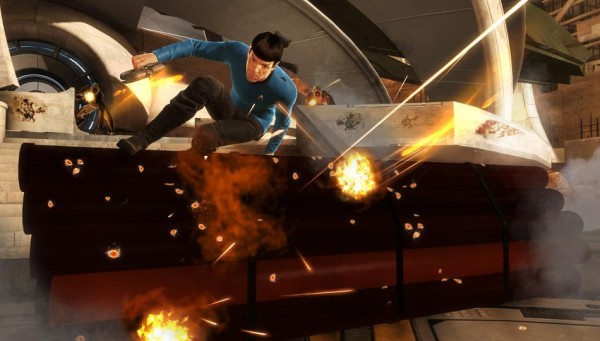 That sounds terrible, and yes, it was a bad experience. This kind of thing happens in almost every stage however, and while I did find it funny – I think most would rather have a competent AI to complete the game with. In a boss battle, Spock runs right toward the enemy fire, leaving Kirk to wake him up. The problem with this is that you actually have to perform a button-holding mini-game in order to revive a partner. This as you would guess ends up being one of the main reasons for cheap deaths during the course of the game. Now, there were moments where Spock did his job well, and if an actual person takes the role – it does improve, but there is little emphasis on teamwork aside from one or two missions, and most of the time, your partner feels like a burden rather than a well balanced sidekick.

Visuals and Audio
The graphics in Star Trek are…well, they are there. The models do in fact represent Chris Pine, Zachary Quinto, and the rest of the cast somewhat well, but they look a bit rubbery and fake compared to the actual counterparts. Remember how Leatherface looked in The Texas Chainsaw Massacre after he removed the face of some teenager and wore it as his own? That is pretty much how these faces look. The environments switch it up from inside spaceships to outside in brightly lit canyons, but feel as if they came from an early 2006 title, rather than something from 2013. Animations don’t do a lot to make things look better either, as Kirk runs as if he rode on a horse for the last two years without jumping off, and glitching textures and models are all too common during nearly every encounter. 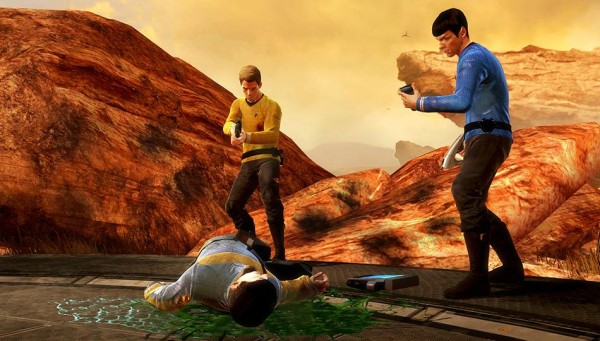 Ready for the best part of the game? Oddly enough, that would be found in the audio. The soundtrack is nothing too special but still fits, taking it’s tunes from the first Star Trek film to capture the many settings. The voice acting however is superb, with most of the main cast lending their voices for this extra story arc. Chris Pine, Quinto, and Urban do a spectacular job of getting their characters to come alive, and that makes these cutscenes both believable and watchable. The sound effects don’t do a lot to make combat gratifying, but that is a small gripe compared to the absolute mess that this game is as it stands.

Overall
Star Trek could have, would have, should have, but didn’t. This is another case of a rushed licensed title that is full of potential, but fails to pull itself together in order to provide enjoyable entertainment. What is odd is that this title didn’t have to be released before the next film, as it’s doing an entirely different plot and could have been bug-tested for months more before release. Instead, we get a product that misses its mark entirely. Star Trek is a game that you will find in the bargain bin in a year’s time, and maybe then – patches will be made to make the game more playable. Right now, this is one out of this world adventure that even fans should snub their noses at.