Pollution is invading the ocean! So obviously the best way to combat this is get some sticky fingered Squids to eradicate the infected sea life and get to the bottom of it! As odd as this concept sounds, it actually makes for a very interesting game and one that was more challenging than I was anticipating. 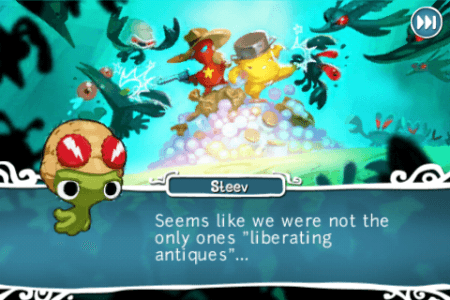 To be honest, I was expecting more of a kids game given the style of the game and the fact that it’s set underwater, I think I just flashed back to Little Mermaid and thought it’d kind of be like that. Oh boy, was I wrong. The game feels a lot more mature than it might come off as in an initial impression. I mean, early on in the game one of the stage’s goals is to just survive for five turns while everyone runs away and then you lose that squid from your team. And you don’t lose him because he decides to run away with the circus.

While from afar this may look like just another iOS game with an easy enough goal and cute little creatures you use to get there, it really isn’t. This can go both was for you, dear reader, either you will get frustrated and move to easier games with even cuter creatures, or you will love the surprise and find yourself far more drawn into this game than any other. 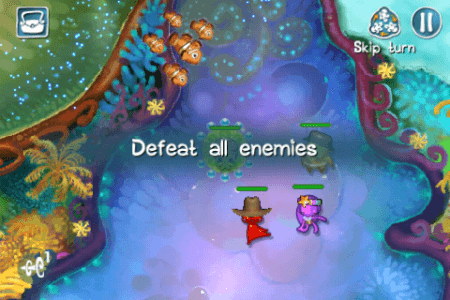 For those first people, there are some levels that are bite-sized pieces of fun and won’t take you very long to conquer without too much hassle. But as you go on in the game you’ll find that it’ll demand more from you, more time, more effort, just generally more brainpower. If you want a game where you can be switched off for most of it and still manage your way through, this is not the right game for you. 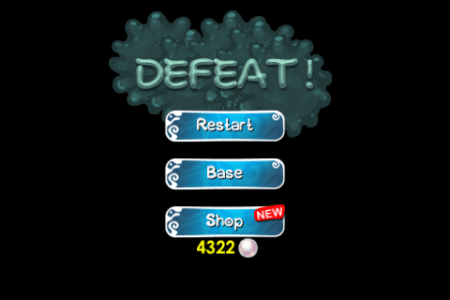 Get used to this screen for some of the levels...

For the second lot of people, strap yourselves in because this game’s going to get interesting.

It is, by definition a RPG game. But not in the traditional sense that everyone jumps to thinking about when someone mentions those letters. You have a team of four squids, a shooter, trooper, scout and healer. They each have their own special abilities as dictated by their class and each get their own special helmet. When you put the helmet on them you have to also select ‘transfer power’ so that the abilities you get from the helmet are transferred to the squids’ stats. 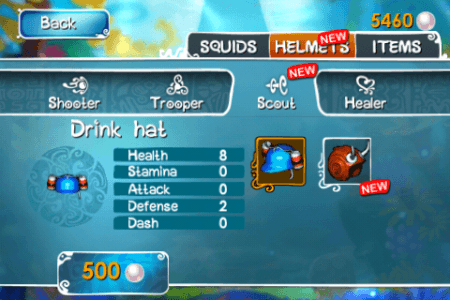 The breakdown of each class is that shooters can shoot bubbles at enemies near them, troopers ‘stomp’ the ground and send close enemies flying, scouts dash their way ahead, and healers well… Heal. I found that the first two classes were the most useful since, ironically, my healer usually died first (what I would give for some self-heal ability) and when the scout made it to an area first he didn’t have the useful firepower to deal with enemies if they popped up. Of course if in ‘get to this point’ goals the scout became useful because he cut down the amount of turns used and hence ended up with a better end result. 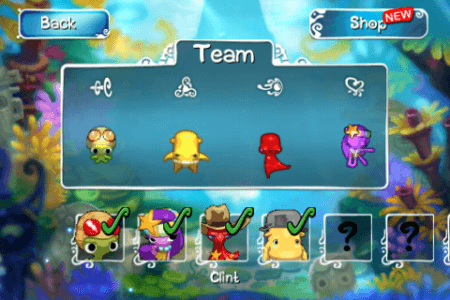 Yes, turns as in turn-based. A game format quickly dying in mainstream gaming, although the use of it in this game is such a foundation to the gameplay that I can’t really imagine another way they’d carry it out well. It wouldn’t work at all as well if the developers had tried to make it like the other popular four-person-team-RPGs Dragon Age or Star Wars: Knights of the Old Republic. As an iOS game there are limitations, and pause and direct is not something you want to be doing on such a casual medium.

The turn-based gameplay means that you have to adapt your tactics to suit, and while there is a bit of a learning curve in the beginning, once you get the whole idea and way to play down you’ll find the frustration leaving and appreciate the challenge. Each turn you get a certain amount of stamina in the form of bubbles, this can amount to a travelling a fair way, or just hounding after one enemy, whichever you want. 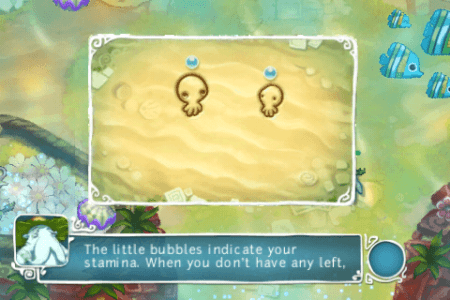 You collect pearls as you go, either from clams or when you hit or kill an enemy. These can be used to purchase things in the shop, level up your squids, or unlock items or squids. You can also use the shop to make in-app purchase of more pearls, or other pearl related items. However, they have kept in-app purchases to a minimum and I respect that.

The graphics are pretty decent, there are some interesting backgrounds and the levels aren’t as repetitive as you might expect from an underwater setting. You’re allowed to zoom in, out and look around the map to plan your moves. You’ll have to take advantage of this because the levels that don’t just require you to fight off the infected horde will require a little bit of looking around to see where you’re heading.

The soundtrack gives me nostalgic flashbacks to old Nintendo games, I don’t know if that was intentional, but for once I didn’t really feel the need to turn it to silent.

Squids is a surprise, it’s a game with real depth to it despite its shiny, casual exterior. What isn’t a surprise is that it has come from a team of experienced industry developers. It’s a real pleasure to play, with just the right amount of challenge to draw you in but not scold you and make you feel useless. For 99c it’s a fantastic purchase and I would really recommend checking it out if you’re looking for an iOS game that will give you an actual challenge.