I’ve always been a pretty big James Bond fan. What’s not to like? He’s a total badass, fantastic charmer, and the man knows how to dress. Well here is EA Mobile’s response to James Bond, Agent Squeak, a cute mouse with the most adorable little bowtie whose goal is to get as much cheese as possible. Cos apparently that’s what the rodent secret service is after. 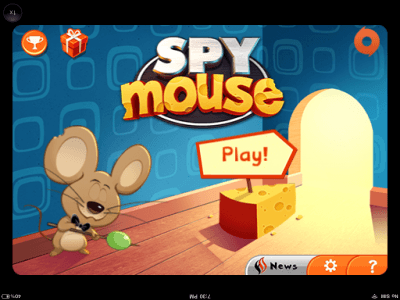 You trace out the path you want your mouse to take, laying out the best path to take that collects all the cheese while also avoiding the cats. There are smaller pieces of cheese that are more of a bonus than anything, and then the bigger pieces that you’ll need to get to finish the level. The amount of cheese you need to gather differs from level to level, and at times the amount of cheese you need to carry is more than that which you can carry, so you need to hide some pieces away in a safe room. 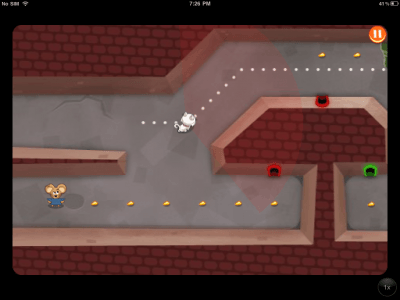 There are a few different types of cats that you’ll have to get past, which will affect how you are meant to strategise your moves. Some cats are ‘blind’ and therefore can be moved around easily, while others are quite fast and you won’t be able to escape from easily if they spot you. You can either use your wit to remain fairly hidden or use yourself as bait so that when the cats pounce they are knocked out. There are also a variety of ways and little accessories to help you out with either distracting the cats (such as televisions which hypnotise them, not much subtlety in the message there) or gathering cheese. 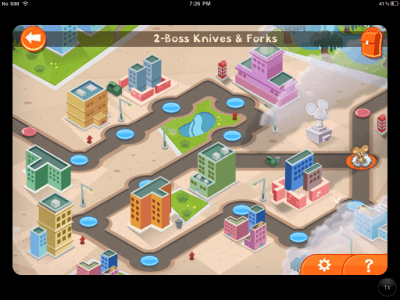 There are six worlds with over 70 levels, this isn’t one of those games that you can finish in half an hour of solid play. And for even more of a challenge there is the ribbon system, which can be earned over a few different goes, and pose quite a challenge as they really ask you to go above and beyond. Each level is fairly short, so even when you fail it and have to repeat it that won’t cause you too much heartache, it also means that it will be fairly easy for you to find a finishing point to put the iOS device down, which is a pain to find in some games. 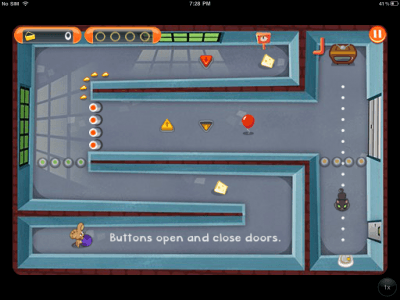 Spy Mouse has a good learning curve, as one can expect from a game that has that many levels to work off of. The levels require some problem solving skills, however if you’re stuck you can generally take a look at the name of the level and that will give you a clue as to how to proceed with it. I like that they give you that hint, but I sort of wish that it didn’t come at the beginning of the level so I could have a chance to puzzle it out for myself more before turning to the hint. 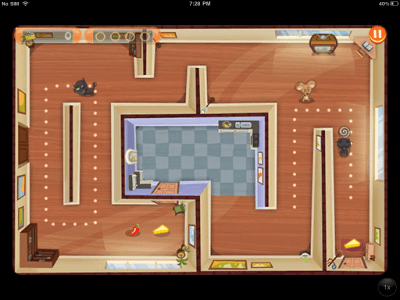 You will hardly find yourself terribly stuck, if you do it is usually in the execution, not in figuring out what to do. I do also suggest that you note the little cracks in the wall, because these may lead to hidden areas and interesting little bonus items which can be extremely useful. 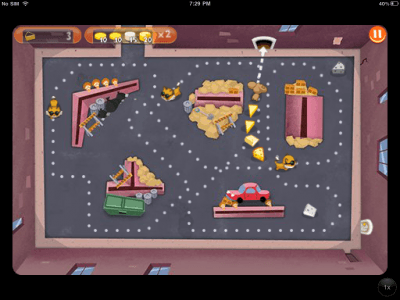 The boss levels start off very simply, just following without too much difficulty, however I have to say my favourite part of the game was the big boss at the end, because it provided a challenge that is not present for a portion of the middle and beginning levels.

Like I mentioned before, I love the design of Agent Squeak and the cut scenes are great fun. The graphics are well polished and the whole thing presents exceptionally well. You will definitely find that Spy Mouse is in the higher range in terms of iOS graphics.

The soundtrack sounds like it has come from a James Bond movie, it’s all suspenseful with that special hint of special agent tune that is quite distinctive. It’s actually kind of cool to listen to the soundtrack while you’re playing because it adds another dimension to the game and let’s you pretend like you really are a mouse secret agent sent to infiltrate the cat headquarters and reclaim the cheese.

Spy Mouse is a well-executed concept, with simple gameplay and requires some good timing and tactics on the player’s part. It reflects the two-year development spent on it, particularly in its length. A quick finish this is not, it is guaranteed to stay on your phone for a while, and the bite sized levels mean that it can be whipped out at any point for short periods at a time.