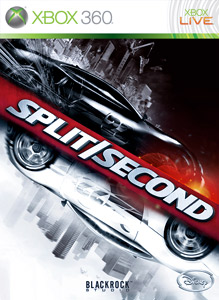 Story
“Split/Second is an intense arcade action racing game set within the world of a hyper-competitive reality TV show. Competitors vie to be the first across the finish line in a made-for-TV city built for destruction, with the ultimate goal of being the season champion.

Competitors in Split/Second don’t just collide with other vehicles to knock them from the track—they can also trigger explosive events that drastically alter the dynamics of the race. Players must use strategy and pinpoint timing to derail opponents, tactically alter the track or create entirely new routes.” [Via Xbox.com]

You compete in a TV show where the city has been rigged to explode. The entire goal is to be the season champion and to simply be the best. There are other drivers trying to be the best in the championship as well, and you will race these guys regularly. Explosions, chaos, and fast cars are all present in Split/Second.

Gameplay
The first thing you have to know is that Split/Second shouldn’t be viewed as a hardcore racer. It simply doesn’t give the same feel. The goal in Split/Second is too survive while destroying your enemies and managing to keep the lead. There are racing elements in Split/Second but trying to just stay in the lead won’t help you win.

There are multiple game modes in Split/Second as well. There are normal races where you compete against other racers and try to win in first place; these races make up a majority of the game. There are some other game modes that add even more fun though. Airstrike mode is where you dodge missiles being shot at you by a helicopter, there is also the reverse of this mode call Air Revenge where you shoot the missiles back at the helicopter. Elimination is a game mode that requires you to stay in the lead and after a certain amount of time the person in last place is destroyed until only one car is left standing. Detonator is a time trial mode where power plays are automatically detonated in front of you and you have to avoid them while attempting to get a good time. Finally, survival mode has you passing giant trucks that are trying to destroy you with explosive barrels, survive as long as you can. These extra modes are a lot of fun and create some fun experiences that are completely enjoyable by yourself.

Multiplayer in Split/Second lets you play against real players and have a joy filled time with friends. Play online with up to 8 players or on the same TV with 2 player splitscreen. Multiplayer in Split/Second is a lot of fun but requires you to play singleplayer. Through the singleplayer campaign you will unlock cars to play with in multiplayer and this is required to have a fighting chance against better players. Without any good cars there is almost no chance you will win online.

The major downfall in Split/Second is the annoying rubberband AI. There is literally no race where you are extremely in the lead. You either win by a few seconds or are stuck in third place with no way of catching up to first. The rubberband AI is helpful to keep enemies around you at all times so you have people to blow up, but it gets annoying when they zoom past you mere seconds after you wreck them. Although the rubberband AI is annoying, it is still manageable and after playing a little while you will either get used to it or throw your controller at the wall in frustration. 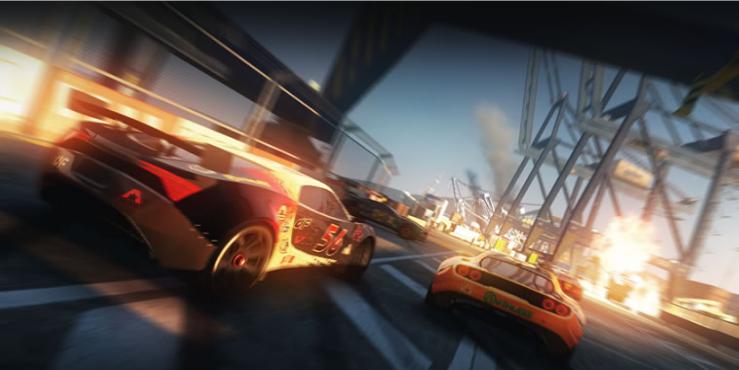 Audio & Graphics
Explosions are everywhere, and smoke fills the track. The graphics in Split/Second are amazing if not a little distracting. As you race down the track at over 180 miles per hour, obstacles will blow up around you as your competitors try to stop you from winning. The sheer chaos can occasionally get distracting, but there is no greater feeling then managing to survive a dam collapse and pulling out of the dust as your heart is pumping and your competition is wrecked and tumbling down the road in a crushed car.

The audio on the other hand is lacking. As I played Split/Second I never really felt that the soundtrack or the explosions were loud enough. There were tons of explosions but none of them were awe inspiring and they seemed almost muffled. Maybe this is because the game requires surround sound, but without an awesome theatre set up the audio isn’t that amazing. The soundtrack is also hidden and I only ever heard it while I was in the lead or really far behind. At all other times I was too busy trying not to wreck to even hear the audio. Luckily, the times I did hear the audio it was fast and catchy; both of which fit the game very well.

Achievements
The achievements in Split/Second are great. There are a few challenging ones and a few achievements based on luck, but a majority of them are all based on alternate tasks. Many achievements these days are solely based on the progression of the game and a lot of them can be unlocked simply by beating it. Split/Second has quite a few based on the progression of the game but even more based on alternate tasks that don’t actually have to be completed. The achievements in Split/Second help increase the gameplay and length of the game as you try going for some of the more miscellaneous tasks. The online achievements are another matter. Getting a form of 1 is really hard. Beating someone that has a form 10 or better is hard to find or even manage because these guys are really good. Luckily, the viral achievement is pretty easy since everyone that is still playing pretty much has it.

Overview
Split/Second is a lot of fun, with explosions and split second choices as the level around you blows up. There are multiple modes, an extensive list of cars and multiple levels to give Split/Second tons of replayability. Cars are unlocked in singleplayer to be used in multiplayer and compete against friends. The annoying part about this game is the rubberband AI and at times they seem almost unfair, but they are manageable. Split/Second is a fun game where the goal is to wreck your opponents. It is less of a racing game and more of a game where you try to survive. You know that feeling when you pull of an amazing move and just barely manage to survive and win the level? That is Split/Second in a nutshell.
I give Split/Second