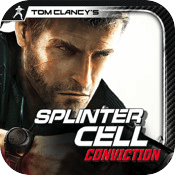 Sam Fisher is  back and revenge shall be his once again even on the iPhone / iPod Touch.  Gameloft have done a fantastic job with bringing Sam Fisher to the Apple iPhone/iPod.  Spanning over 11 different missions you’ll get to visit places like Malta and even take a tour of duty with Sam in the middle east.  As always the storyline for conviction is about Sam’s thirst for revenge for the murder of his daughter and with your help he’ll be able to accomplish this task and put an end to that person’s life the same way he put an end to his daughters. 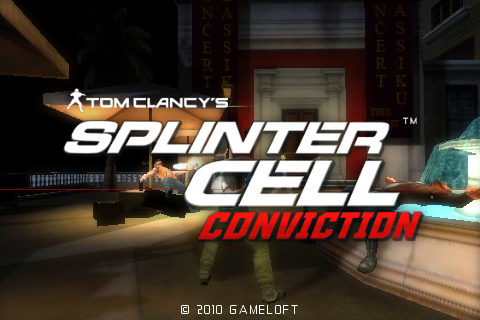 Splinter Cell Conviction is a 3rd person shooter similar in gameplay to Gameloft’s recently released title Zombie Infection which was released only a few weeks ago.  The control system works the same way with the left analog stick moving Sam around.  Moving your finger around the middle of the screen will change and move the camera angle around which you will need to do quite often so you can see where you are going or line up your enemies to take them down.  Which brings us to the action buttons, on the left side there are two buttons which are used for a variety of different things, from running into cover, leaping out of cover, climbing up ladders and poles, aiming and firing your gun to grappling and performing take down and execution maneuvers when in close quarters and also grabbing an enemy and using them as a human shield. 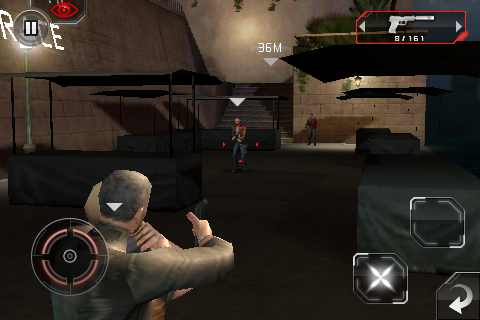 Other such moves you can pull off with those two buttons all depend on the situation you are faced with.  If you encounter an enemy that has information the interrogate button appears when Sam is near an enemy.   Once you have an enemy at your mercy you can punch the crap out of them till they provide that much need information.  Then once they have nothing else to share Sam ends their pittiful existance.  Now there are a few other actions Sam can do.  One of them is deadly “MARK and EXECUTE” this only happens at certain places in the game / levels.  Once you approach an enemy(s) that can be Marked for death a little black circle appears over their heads.  Pressing the action buttion will allow you to mark the targets and then with the press of the other action button will allow Sam to pull off the kill with the greatest of ease.  It’s a great feeling to pull one of these off and makes you feel real bad ass.  Adding to this is the ability to MARK and EXECUTE enemies from behind doors.  Sam can use his “Convex Mirror” to look under the door into the next room and if possible “Mark and Execute” enemies.  This is super cool and is a complete pleasure to pull off. 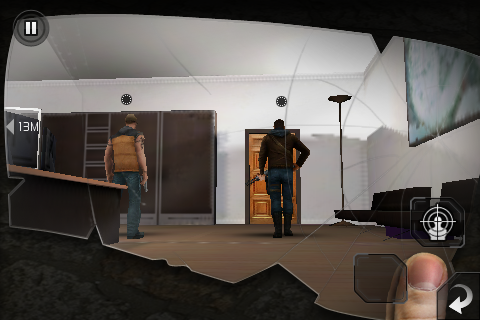 Now there are a few little issues with some of these actions, when trying to move into cover not all locations allow you to do so.  You can only take cover at locations defined and allocated by the game.  This is a little annoying as you might want to take cover just around a corner where there’s two or three enemies but wont be able to do so.  Another issue this time with the aim/firing system.  When attempting to shoot enemies if they are a little out of range Sam will not be able to  take the shot to take them down.  Once an enemy is in range the cross hairs will change from white to red.  Only then will you be able to execute your enemies.

The AI in the game as mentioned in video review are not the sharpest tools in the shed.  As explained if Sam is hiding in the dark he is pretty much undetectable, he could be standing right next to an enemy they will not even see him.  Which is a little silly, on the other hand if Sam has been detected enemies do their best in taking him down with a barrage of gunfire.  Now I have to say that even on the hardest difficulty level it does take quite a lot of lead to drop Sam.  This is possibly a good thing for the player but it’s not very realistic, especially on the harder levels where your meant to be feeling the pain a little more. 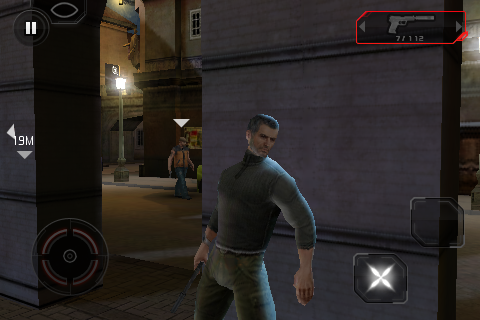 As this is review is accompanied by a video review.  Lets take a break from all the reading and click on play to watch the remainder of the review.

Splinter Cell Conviction takes you through 11 missions of non stop action, stealth and even on rails shooting (speed-boat) level, it’s a fine mix of action, stealth gameplay that will certainly keep you busy for hours.  The story is great and the gameplay is fun.  As explained above there are a few little issues but they do not in anyway ruin the experience of the game what so ever.  Gameloft has once again his a homerun with Splinter Cell Conviction, fans of series who own a iPhone will find this quite enjoyable with all the little extras that made the Xbox & PC game so great such as the Mark & EXECUTE, and interrogating enemies.  New comers new to the series will also be able to quickly and easily pick this game up and run with it with no issues what so ever.

For the price ($9.99) Splinter Cell Conviction is a must have as its certainly one of the best games on the Apple iPhone/iPod Touch at the moment.