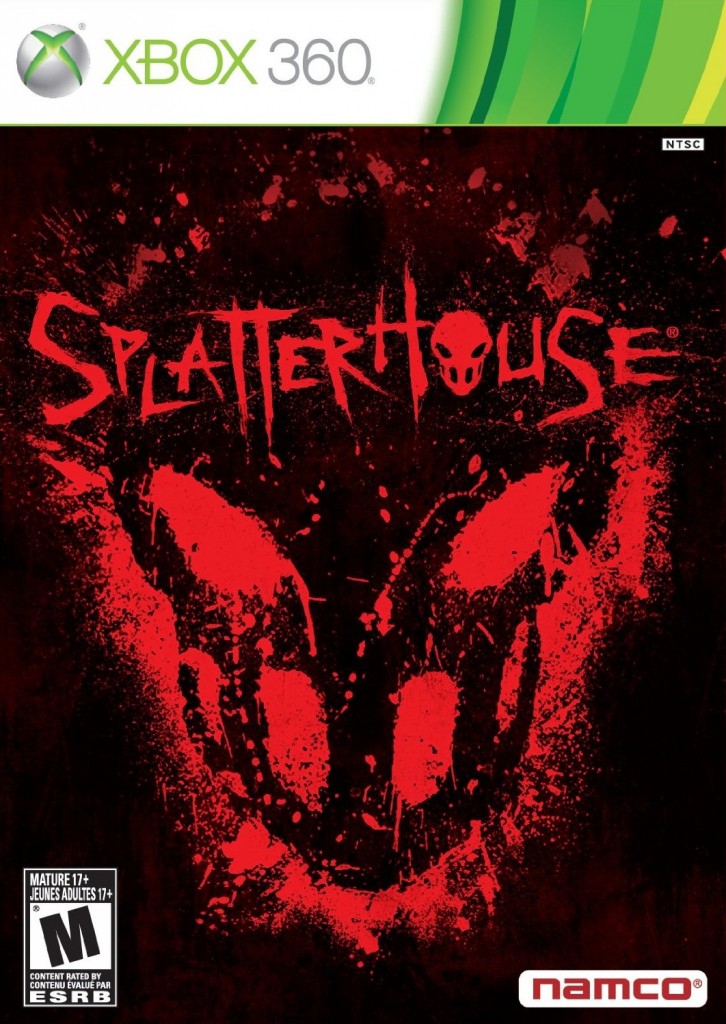 Overview:
Now some may recognize the name Splatterhouse and remember a series that used to be an arcade game, and then make its way onto the home consoles on the TurboGrafx-16. The original game was a side scrolling beat ‘em up styled game that featured plenty of different monsters and plenty of gore which put the game on a whole new level back in the late 80’s and early 90’s. Now Namco published the original game and they are back again to publish it again as Namco Bandai. However in this version it takes a step from 2D side scroller to a full 3D slaughterhouse, or should I say….. splatterhouse.

Story:
Everything seems right in the world for Rick Taylor. He may be a pretty spindly looking college boy but he has an amazing looking girlfriend named Jennifer Willis. Now Jennifer has to interview a man named Henry West so that she can use him for a college paper but the only problem is the fact that he isn’t a normal man. After they arrive West kidnaps Jennifer and leaves Rick for dead after sicking creatures he summoned with a Lovecraftesque phrase.

It just so happens however, even though the monsters smashed Rick’s chest in and sent him flying back into a few sarcophagi, all is not lost. A mysterious mask falls out of a sarcophagus and falls next to Rick. Now I don’t know about the rest of you, but at this point anything seems better than dying in a puddle of my own blood; but things get even better when the Terror Mask calls to him and tells him that he will help him but they must make a deal. 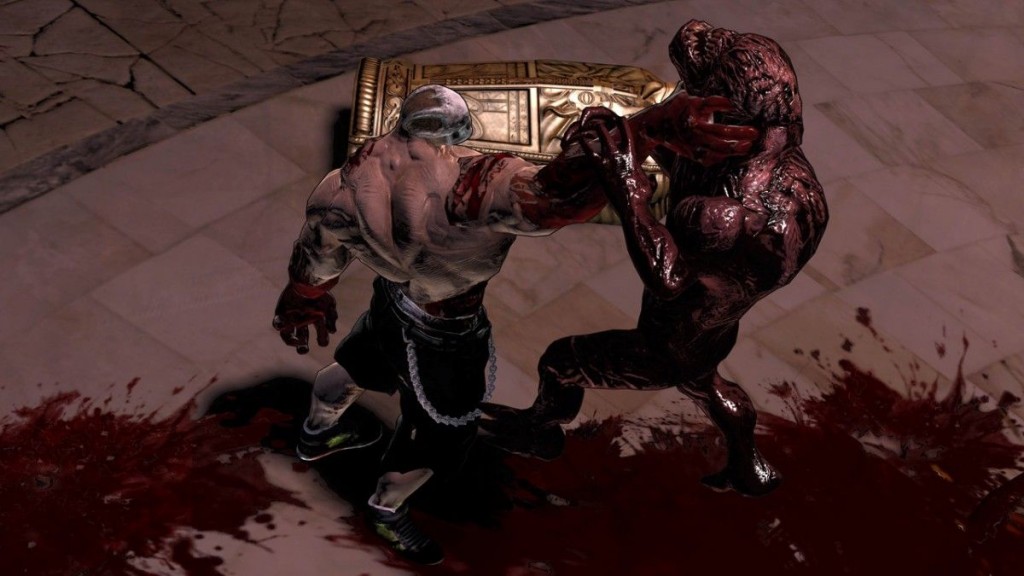 After accepting said deal he places the mask on his face only to literally hulk out by becoming an extremely large man with muscles rippling on his body. Rick is hell bent on saving his girlfriend and may Cthulhu help any twisted creature that gets in his way.

Now the storyline is right in line with the older Splatterhouse titles but does revamp it for more modern appreciation. First of all with the addition of Henry West players now have a clear cut goal on who they have to destroy and what they are striving for as they slaughter their way through waves of enemies. But things aren’t always as they seem and the different twists to the story that players come across will leave them thinking.

Another note worth mentioning is the fact that Rick and the Terror Mask interact flawlessly with one another. Sure at first it may appear annoying but when most enemies themselves don’t talk the best interactions are between the Mask and Rick. Whether the mask is making fun of Rick, swearing at him (quite a lot of imaginative curses in fact), or supporting him and retaliating they make a great team together.

Graphics:
For a game with so much blood and gore, it is slightly disappointing that the actual blood and gore feels like one of the lesser graphical points for the game. With so much blood flying around at times the amount of it just becomes unbelievable at points. Sure it is Splatterhouse, but the blood sprays around like water it feels just as consequential. While the gore aspect was handled great with limbs separating and body parts being smashed with great enjoyment, the blood just felt half-hearted. 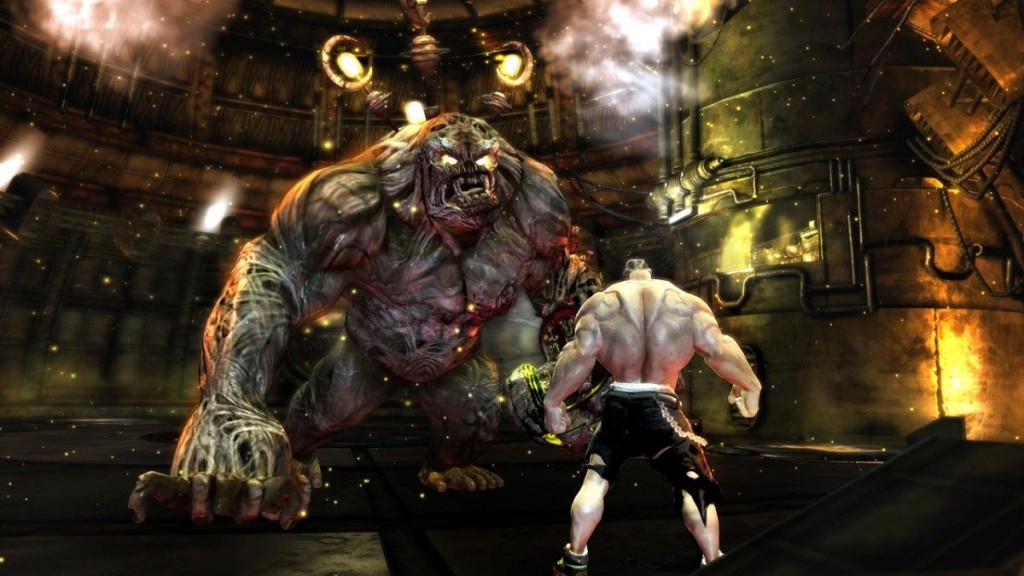 Beyond the blood disappoint however Splatterhouse does have good aspects as Rick’s performance and animation is very well done. This is quite a feat especially when Rick enters his Berserk form and tears apart enemies like a hot knife through butter and sends limbs flying satisfyingly around the area. When Rick is damaged heavily enough and you are able to see the actual damage on his body it is very impressive.

Environmentally Splatterhouse delivers a creepy and satisfying amount of different levels and variety to keep the player interested. However the amount of different enemies available to fight is surprisingly small. After a certain while enemies just don’t feel new anymore and when you encounter the same demonic enemy again and again it puts a damper to the new environment you are fighting in.

Audio:
Earlier I mentioned the fact that the Terror Mask has quite a voice on him. Well thankfully the developers saw fit to place a veteran voice performer as the voice of the Mask. Jim Cummings, who has done countless voice rolls, delivers an amazing performance as the Terror Mask and this enhances gameplay immensely. If anything negative can be taken away from the Terror Mask’s constant badgering is the fact that it will occasionally spout the same dialogue in some instances, especially regarding weaponry.

Now the voicework is impressive, but how about the actual background music? We can’t have classical music playing in the background while enemies are being ripped apart and beaten to death with their own limbs can we? No we cannot and thankfully Splatterhouse delivers a heavy metal soundtrack that is sure to keep your blood flowing, as well as the enemies. Songs from Five Finger Death Punch, Mastodon, and plenty of other heavy metal bands keep the action feeling at its peak. 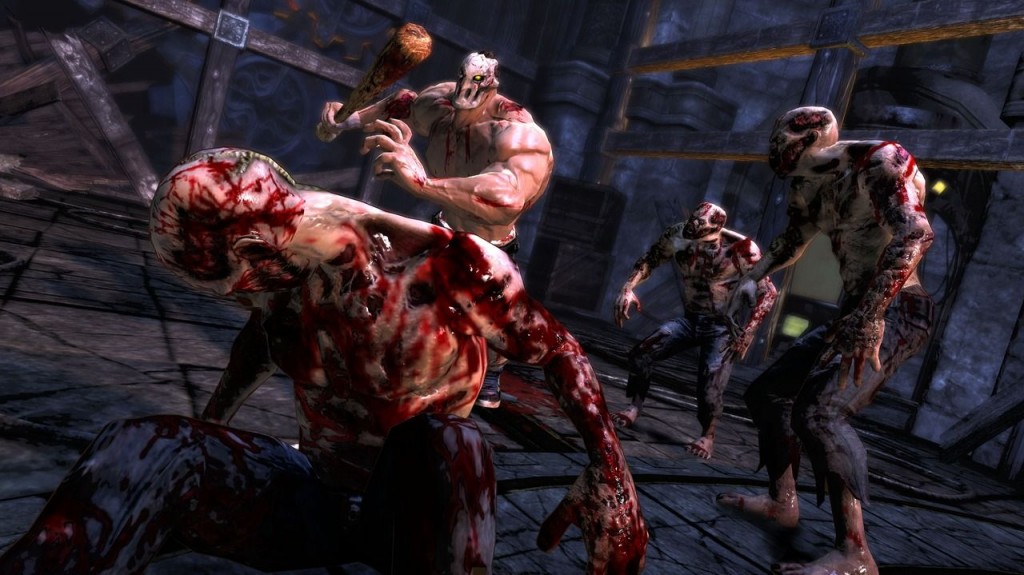 Gameplay:
Splatterhouse doesn’t step too far outside of the box as far as gameplay mechanics go. The game is a straight up brawler with a light attack button and a heavy attack button. There are a number of different combinations that can be strung together and expanded upon via the blood upgrade system. Yep there is a blood upgrade system. As you do tear apart all the creatures in your path you will accumulate large amounts of blood that can be used to purchase special attacks, combo extensions, and even more health.

This is quite useful considering the enemies you encounter are just begging to be beat into the ground. Combat provides great feedback and special finishing moves known as Splatter Kills which in theory are simple quick time events are quite brutal, but grow old as the same Splatter kill happens for every enemy type. Plus even though you can create extremely vicious combination attacks, button mashing your way through a wave of enemies can create more or less the same effect. Put this together with the fact that the amount of different enemies you see are very slim and it starts to get tedious even with all the blood and gore.

An interesting feature is the fact that Rick, while still a hulking powerhouse, is as vulnerable to damage as the enemies he is facing. Sure you can tear off an enemy’s limbs and beat them to death with them, but there is also the fact your own arm can be torn off by an enemy. No worry however it grows back and in the mean time you can use your new found arm club on that same enemy. Also Rick has the ability to use some of his Necro Meter power (filled by slaughtering enemies of course) to heal his wounds by viciously sucking the blood from enemies around him. Also he is able to go into his berserk mode if his Necro meter is full where he becomes nearly invulnerable and is able to kill most enemies in one hit. 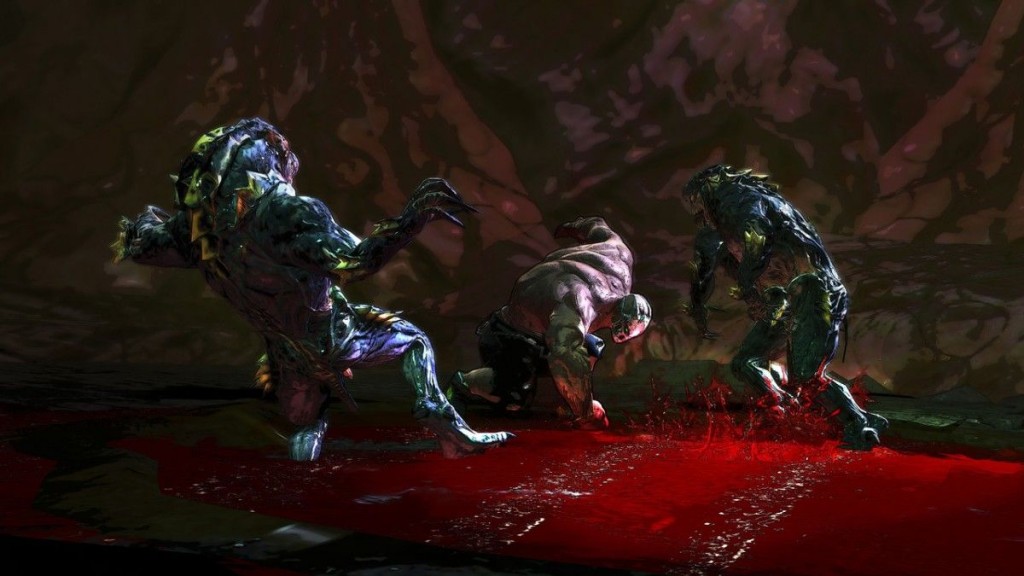 To expand gameplay there are collectibles throughout the game such as pictures of Rick’s girlfriend Jennifer which range from risqué to mild nudity. So just in case all the blood doesn’t offend you but nudity might, keep an eye out. There are also various recordings from West to be discovered throughout the game. Other than that however there are a handful of survival mode stages where Rick must face wave after wave of enemies and survive, while trying to go for a best time. The survival mode is enjoyable and also provides even more pictures that are exclusive to the survival waves.

Another interesting feature that can be unlocked is the original Splatterhouse games. All three of the previous Splatterhouse games come back to be played to their fullest and players do have infinite continues in case they get stuck, but will be placed back at the beginning of the area if they do. These games are a nice little time killer and are great for fans of the original series, also it is interesting for those who never played the originals to take a look back in time and see how much the series has evolved.

Now for the bad aspects of Splatterhouse. In a throwback to the classic Splatterhouse games that I mentioned before, the screen will occasionally switch to a 2D sidescrolling format. This includes easy one hit kill enemies, and lots of traps and platforming. Now that is a horrible combination when the controls for these areas are so frustrating it will make the player dread when they notice the shift to 2D. The jumping is handled extremely badly in these sections, as Rick can either jump and fall off of a ledge where he should be securely standing, and fall to an instant death, or simply not even making a jump that should have easily been made at any other point in the game. 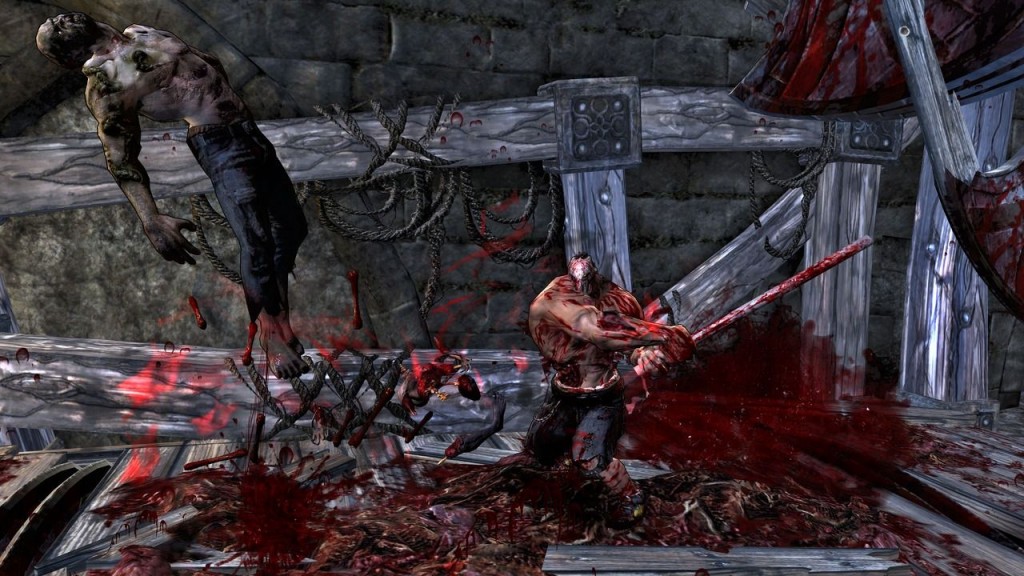 Now the instant deaths would not be a bad thing however, if it wasn’t for the fact that Splatterhouse has one of the longest loading times I have seen in years. The loading screens are scary for the most part with some of the monsters close up and attacking one another or simply acting creepy, but that grows tiresome extremely quickly. This is due to the fact that your average load time can be anywhere between 30 seconds to a minute. Now keep in mind that I also had the game installed to the hard drive which is supposed to make load times shorter. Which means that the load times can simply be atrocious without an install to the hard drive, and even then are long enough to really shatter the players’ immersive experience.

Overall:
Now Splatterhouse does plenty of things right. Blood is in extremely high quantity and can reach such a high level of gore that it is superfluous. With great voice work and a metal sound track that keeps the blood flowing, it is easy to lose yourself in the action and gore. If only the action itself wasn’t broken up with extremely long load times and the fact that the action itself can grow tedious at times with button mashing. While nostalgia may play a big factor in whether or not you will enjoy the game, all the blood, gore, and hits of Lovecraft only paints a picture that is best summed up with a passable reboot to a classic series.

I give Splatterhouse for the Xbox 360: