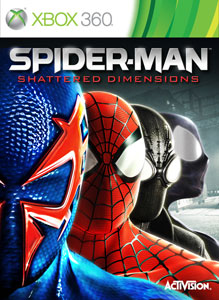 Gameplay
Gameplay consists of playing as four different Spider-Men from four different dimensions. This gameplay mechanic lets the developers throw a few different styles of gameplay into one game. This tactic can be looked at in many ways, but probably the most obvious is to let the players get a wider experience in playing the game. Since the developers of this game decided to remove the sandbox gameplay, the multiple dimensions give the game a larger feel other than just the levels that you linearly fight through.

The four different Spider-Men are: Awesome Spider-Man, Ultimate Spider-Man, 2099 Spider-Man, and Noir Spider-Man. Awesome Spider-Man is the version that many of us all know, it is the version that is in the movie and the comics; Ultimate Spider-Man is the version where the black suit takes over spider-man; 2099 spider-man is a futuristic spider-man; and finally Noir Spider-Man is a “classic film” like spider-man. Out of all the variations, Noir is the most unique. In Noir you sneak around in the shadows, and attempt to take everyone out without ever being detected. You can’t actually fight head on with the enemy, so if you get caught you must hide and then sneak up on the enemy again once they lose sight of you. The other three consist of beating up a whole bunch of bad guys and getting to the boss while using each of their unique moves; however, these three also have slight things that set them apart from the rest. 2099 spider-man, for instance, has free fall events; which require you to avoid object that are coming up towards you and falling down from above you.

Aside from the differences, each Spider-Man is still Spider-Man. Swinging around and climbing on walls is exactly what you would expect to be able to do. While it is all fun, there are some problems with it all. Since the levels are linear and most of the time you are busy fighting bad guys, you don’t really spend a lot of time swinging from webs. Instead you spend time using your webs to zipline yourself to the next post, or to a high spot. Another problem is the annoying camera; it will continually readjust itself when you don’t want it to. The annoying camera makes climbing on walls a chore and not fun at all. A game where climbing on walls is a key feature, a crappy camera nullifies it and ruins a large portion of the game.

There are tons of other things to do as you play through the game, there is the web of destiny to complete, multiple difficulties, rankings for each level, and upgrades to purchase. The Web of Destiny consists of a whole bunch of miscellaneous tasks that you can complete in each level. These tasks can consist of killing a certain person in a certain way, or beating a certain area in a certain time. Many of the tasks can be done on the first attempt if you keep track of what tasks you need, but quite a few will require multiple attempts on the level. As you progress through the levels you will gain experience, this experience can go towards upgrades and unlocks within the game. Upgrading yourself will require a bunch of experience, and as you level up you will gain access to more and more upgrades. There are also unlocks, such as alternate costumes for each of the Spider-Men to wear. 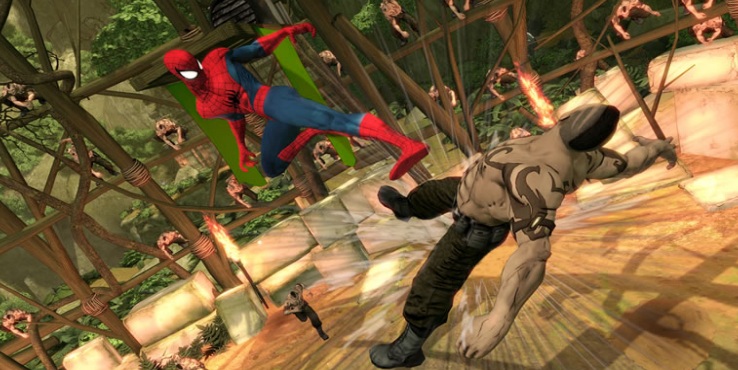 Graphics
The graphics are really good in this game. Since four different dimensions are present as you play through the game, it is really nice to see the differences in art style. The  dark and light contrast of Noir Spider-Man to the futuristic style of 2099 Spider-Man are both good examples of the superb artwork. There are also multiple costumes for each Spider-Man that you can unlock, and the bosses look marvelous. 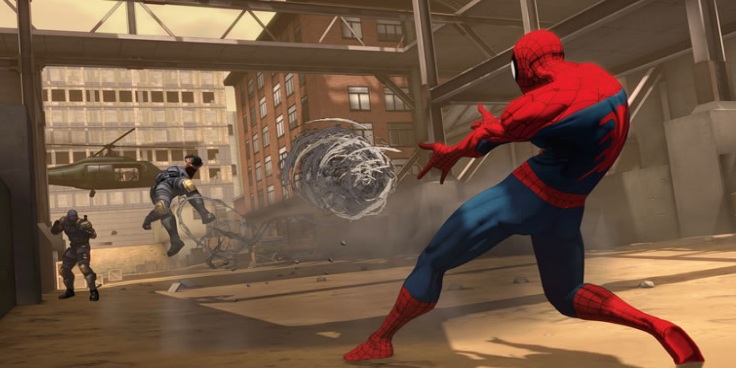 Achievements
The achievement in Spider-Man: Shattered Dimensions range from easy, too hard, and even too extremely time consuming. Mostly the game is split between really easy, and really hard achievements. A large chunk of them are comprised of achievements that you will either get through the story, or by completing some easy task. The others consist of achievements that require you to beat a level on the hardest setting with the best score, or beat a level without dying (actually easy on easy) or beat a boss without getting hurt. Completing the Web of Destiny, which was mentioned in the gameplay section, will take some time. Even though a majority of it is completed by just going through each level, there are still certain tasks that may take a while to do. Overall the achievement list gives you plenty to do while in the game, even after you beat it; but it is definitely not an easy 1000, though it isn’t an extremely hard one either.
Click This Link to go to the achievement List

Overview
While the free roaming that is so popular in Spider-Man games is out, a new experience is brought in for players to enjoy. Four different Spider-Men let you play multiple roles and enjoy slightly different gameplay mechanics all in one game. The game is really focused towards fans of Spider-Man and all the villains are from the comic book. If you are a fan, you will get much more enjoyment out of this game. There are a few annoyances such as the repetitive one liners and the awkward camera, but past that is a fun game that is quite enjoyable.
I give Spider-Man: Shattered Dimensions