Spelunker HD is a refresh of a 1983 cave exploration game that sees you cast as a nameless, plotless hero who decides to explore a huge set of cave systems – presumably in search of a mystical, shiny treasure.

Gameplay consists of collecting the keys needed to open old and mystical doors that take you to the next level of the cave. There are a myriad of deadly obstacles to avoid, along with bizarre looking oxygen supplies , score boosting points and hidden gems. You are armed only with bombs, flares, and your oxygen tank, which comes in handy to clear out the ghosts you’ll run into occasionally. 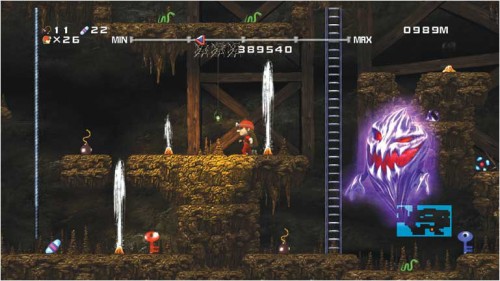 Spelunker HD is so hard that I died 24 times in the first five minutes. That’s pretty much once every six seconds.  So if you don’t enjoy truly difficult platformers, stay well clear. It’s tempting to review the game in a Gollum and Smeagol like fashion, one calm and considerate, one ranting and raving. But with more time spent playing the game I chose to give it a fair trial.

The control system is picky to the point of insanity, and could easily be interpreted as badly designed for any less than patient gamers. Still holding the direction button when you land on a rope? Dead. Clip the side of platform? Dead. Fall an infinitesimally small distance? Dead. I could go on. It demands 100% concentration and really is tough, you have to learn the system, which at least is consistent in it’s eagerness to kill you.

But despite this, I stuck with it – not everybody will want to. The game rewards patience and practice, and when you get the hang of the controls and know what to avoid, the gameplay becomes pretty addictive. The difficulty involved means that when you do succeed there is a big sense of achievement, but this is often balanced out by bouts of sheer frustration. There can be moments during Spelunker HD, when you’re standing looking at the spot where you’ve died about 20 times in ten minutes, that you want to embed the controller in the wall. Hard. 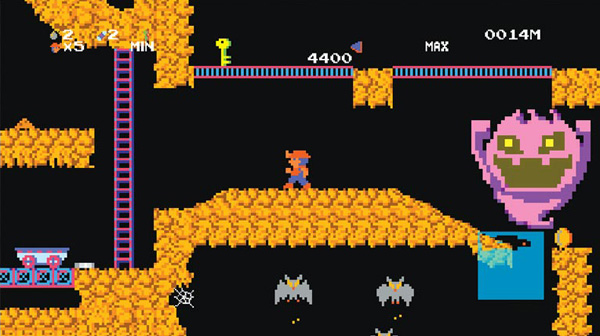 The levels com in sets of 10, each with its own theme and dangers. The game begins in a fairly standard mine setting, with Indiana Jones style rolling boulders, pooping bats (yes, the bat guano is deadly), spiders, snakes, pitfalls and jets of fire. Spelunking your way to level ten unlocks a more watery set of graves for you to die in, and the platforming also becomes more complex as the game goes on.

Aside from the difficulty, the games other weak point is the way level progression and game overs are handled. The game dutifully records all your play data, slotting you in to the global rankings every time you hit game over. The total death tally and your worldwide ranking is fun to keep an eye on, but the process slows down the game restarts, which in a game of normal difficulty wouldn’t be a problem, but here it is.  You have to go through the rankings screens, the home screen, hit continue, load up the level, and you have to do it a lot.

And this is where the save system adds to the party. The game autosaves, but only after you complete each block of ten levels, which to any normal human being is next to useless unless you want to replay every level over and over again. The only solution is to save and quit every time you make a bit of progress, which slows the game down even more.

When you complete a block of ten it enables you to start a new game in retro or HD mode from level 10, 20 etc, useful if you find yourself saved at a difficult point with no lives left to get you anywhere.

The up to date graphics of the HD mode are fine, but lack the charm of the brightly colored retro mode. Your spelunker in particular is a bit bland, but some of the death animations more than make up for it – as well as showing off the games sense of humor.  Little flashes of it crop up here and there, and do a lot to help you stick with the game. 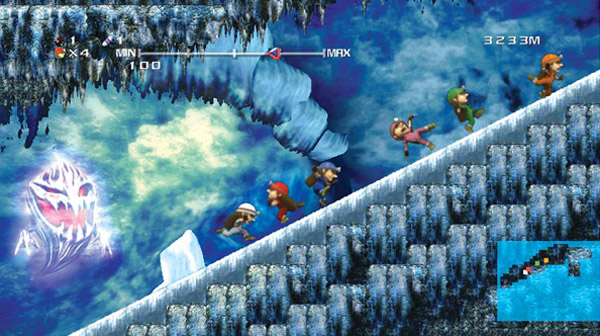 The music is an update of the original theme – which can of course be found in retro mode. It’s an upbeat, electro dance number, with a constant backbeat. If the games going well and you’re flying through the stages, it’s great – cheery stuff. If your falling to your death constantly, not so much.  There’s little variation to it throughout, only changing for a spooky theme that plays to let you know when there’s a ghost on the prowl.

Multiplayer is available in two styles, wisely divided into competition and co-op modes.  Both online options support anything from two to six players, whom you can find in public or friend rooms, or if you’re playing offline, up to four people.

It’s well set up, with the screen mostly given over to the exploits of your own adventurer. Other players if close enough will be in your own view of the action, but otherwise take up smaller snippets of the screen so you can get an idea of what everybody’s up to.

In the group excursions  there’s a true element of co-operation needed. Every key can only be picked up once, so if you want to get through a set of doors, all keys and their grabbers have to live long enough to get to get there. Multiplayer is quickly paced, and holds up well with the melee caused by throwing 6 players into a death prone world. Sadly I never found anyone in the competitive play rooms, so can make no call on that particular mode. 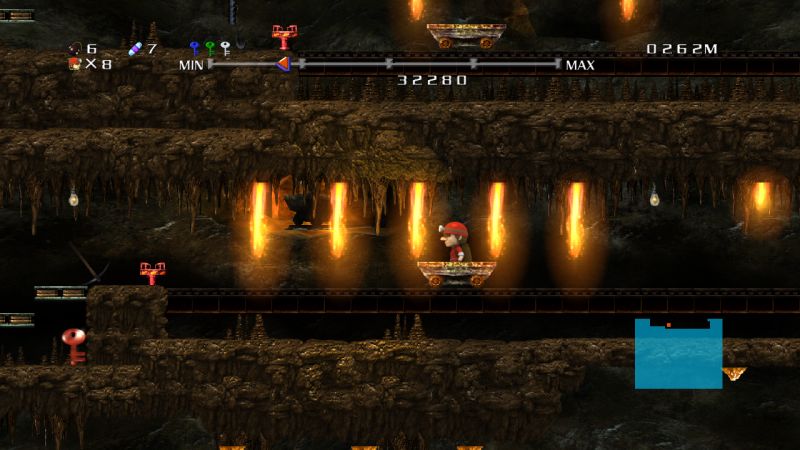 In addition to the main gameplay there’s a simple emoticon system that lets player communicate with each other in multiplayer, sporting helpful stuff such as ‘wait’ or ‘come here’ and the ever essential mockery options, although my personal favorite is ‘timeout’ complete with a picture of a toilet. It shows off the wry sense of humor that runs through the game.

Whether you love or hate Spelunker HD is down to how you interpret the games difficulty. Embrace it and the platforming is a fun experience, the sensitive controls a challenge to be beaten; reject it and you’ll abandon the game within minutes.  The humour that occassionally pops up helps a lot if you decide to give the game a chance, and the music combined with the constant dying can actually become quite funny, especially in multiplayer.

With 100 levels and plenty of promising multiplayer on offer, there’s a lot of value to Spelunker HD if tough platforming’s your thing. But I cannot emphasize it enough, if you don’t like difficulty, don’t do it!

If you do complete this game, let me know, and I’ll call the Pope to get you that sainthood.