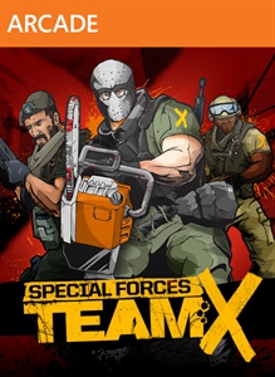 Overview
When it comes to multiplayer third-person shooters for PC and XBLA, there aren’t overly too many.  Sure there are some, but there tends to be far more of the first-person variety or other genres.  Players hoping or looking for a good multiplayer experience then may be in luck with the new shooter titled Special Forces: Team X that’s come to both PC and XBLA.  Does it offer everything a player could want?  Or will those that play it find it falling short?  Read on oh interested persons.

Story
Story?  Pfft, who has time for that?  Don’t be looking for a story here because this game is designed to itch the multiplayer scratch and nothing else.  Special Forces: Team X includes no single player, zero solo gameplay, and the games career is simply a set of personal achievements for players to attempt throughout all their multiplayer games. 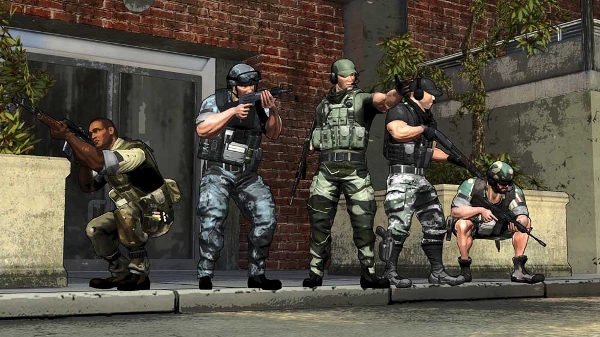 Gameplay
Alright, so no story to fall back on, so what is there in terms of gameplay?  Well first off, there is no tutorial, no training, and no explanation as to how to play the game at all outside of a diagram pointing out the buttons.  That should mean a fairly straight forward game.  What I found was the worst gameplay experience as I ranked up from Level 1 to Level 4.  I was consistently killed without barely any kills to call my own.  In addition to weapons that seemed difficult to aim and movement speed that with the exception of sprinting forward meant being dead in the water in any firefight.  Then I figured out it was a cover-based shooter.  Oops, well that does explain the abundance of chest high walls.

After figuring out the key gameplay element I found myself having a far more enjoyable time.  I could kill things, live longer than ~20 seconds, and actually contribute to my team, which incidentally is another major gameplay element.  Special Forces: Team X doesn’t just encourage working as a team, it rewards it.  Sticking close to teammates will slowly build up a multiplier, the longer together the higher the multiplier, even giving a warning when leaving a teammate’s range and about to lose that multiplier.  For the vast majority of gameplay this feature works well, keeps players from going lone wolf and the only time it gets in the way is with poor teammates.  In addition to the multiplier players have skills they can activate, which will buff all those currently in range with better damage resistance  or accuracy, etc.  While this could be overlooked, those that learn to use it effectively as a team make a better impact. 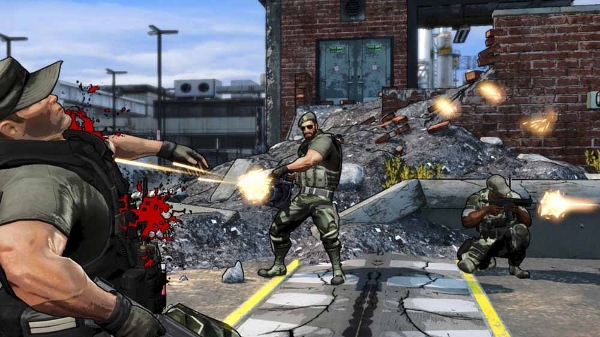 Besides cover-based shooting, Special Forces: Team X has taken a few other cues from shooter trends by utilizing a level system.  Play, rank up, unlock stuff, modify load outs, repeat.  At first I thought that this was the cause of my failure in the game, having poor equipment facing those with superior, but they actually seem fairly balanced.  All the guns, which incidentally have permission to use actual guns like Colt and Kalashnikov, can also unlock different attachments throughout the levels to get them exactly how anyone could want them.  The one slight miss is a few of the appearance aspects that can be unlocked.  Different clothes that can be unlocked, alright, but body types don’t really need to be locked.  Going along with the appearance, how a load out is picked is exactly how the character appears in the game.  No shading them to a specific color to easily tell teams, everyone in varying camos and outfits, cause this is realistic-ish combat.

Finding a game is incredibly straight forward, a list of current sessions is available that gives gametype and current number of players.  After figuring out what the abbreviations for the gametypes are, hint its not that hard, finding a game of exactly what a player wants is super easy.  This list however is just the public matches as matches can also be made private, working exactly like public matches and even contributing for missions and levels.  Teams aren’t limited to only 2 either, going up to 4 different teams which can really change the gameplay dynamic, if only the match list included that with the other information. 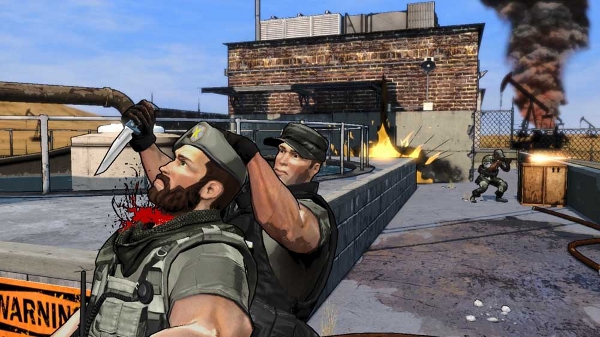 The guns themselves and how they unlock are actually pretty unique.  While load outs have a primary and secondary weapon, primary weapons are reserved only for rifles and SMGs, while secondary weapons include pistols, shotguns, and a combat knife.  Don’t get too excited though, the right to carry both a rifle and shotgun is reserved for those at least level 9.  Though be careful when picking a weapon load out as the damage information on the side is a little buggy and only shows the last weapon selected to compare against, which isn’t helpful when trying compare between the different secondaries unless a secondary was selected last to re-up the information.  Not big, but was a little confusing until I figured that out.

Besides the load out weapons, special weapons do appear on the map during gameplay.  From the sensible sniper rifle, powerful RPG, mighty mini-gun, supportive air strike canister, to the crazy chainsaw.  Complete with a giddy run animation as the character tries to find someone to use it on.  During gameplay, they seem like a one shot deal.  Whoever picks them up gets to use them and if they die it can’t be reclaimed.  This is both good and bad, it sucks that someone can pick it up and immediately get taken out nerfing it that spawn, but on the other hand it’s good that failing to wade through enemies with a chainsaw wont end up with the enemy getting it themselves and wading through their team.  A little bit different than other games, but in my opinion a better option as it prevents matches from becoming a fight over the power weapons and instead a special bonus during a match for whoever grabs it. 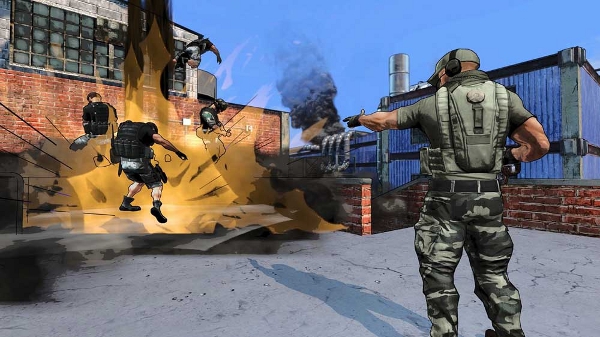 The map a match takes place in is actual one of the most unique features of the game.  Being broken up into three tiles, the map’s actual layout is voted on before the match begins, with players cycling through the various pieces in each slot and the highest votes for each are the ones selected.  This gives the single three tile map over 100 combinations, which may seem a little daunting, but it mostly comes down to familiarizing oneself with each of the tiles a much smaller easier task.  All in all, it makes the terrain much more versatile though with a bit of a different learning curve than other shooters.

Visuals and Audio
As could probably be told from the screenshots, the visuals of Special Forces: Team X goes more for the cell shades kind of look, but may be closer to over saturated.  While interesting it kind of highlights the difficulty the game has in deciding if it is serious or silly.  Without this kind of art style things like the chainsaw would seem out of place, but with it the inclusion of accurate gun names is weird.  For the most part the visuals do work, even when getting a headshot and seeing the bloody stump where a face used to be, as too realistic something like that might not go over very well.  While it doesn’t really work against it, it doesn’t overly add to the experience either, being more or less just there. 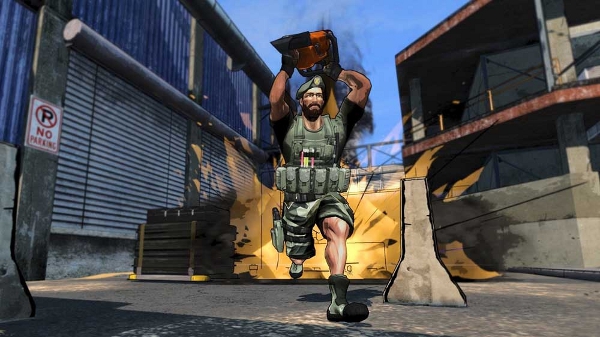 The audio doesn’t fair much better unfortunately, while the music on the Main Menu is pretty solid at first it turns out to be about the only music in the game, repeated over and over.  Luckily, players will only be on the menu for short periods of time, so it’s not too bad.  While in a match the vast majority of the audio is gunfire and whatever characters happen to be saying, from throwing grenades, to the current status of their dogs.  This is unfortunately pretty flat dialog with really dry delivery, I mean I’ve never heard the phrase “My dog’s dead” spoken so unemotionally.  The audio leaves a lot to be desired.

Overall
Despite my little hiccup in how to go about playing the game at the beginning, Special Forces: Team X has fun and well-balanced gameplay.  The only real stumbling block is the audio, which if played with a headset in total communication with the whole team isn’t so necessary, but without that it’s dull.  A general selection of gametypes, yes, but executed very well in a game that focuses a lot on team play.  Those players that are really into team based shooters should have a good time, just remember to use that headset to hear people that might actually sound like they care about what’s going on.