Spare Parts is an Xbox Live Arcade platform game in which you take on the roles of robots Mar-T and Chip while they search for the titular ‘spare parts’. After finding themselves dumped out with the rubbish on a strange planet, they meet a friendly ship’s virtual captain program known as Con-rad (voiced by Simon Pegg), who then sets them the task of collecting all the parts of the ship so that he can build it up and restore the ship to it’s former glory. They must scour their new and hostile environment for these parts, all of which are guarded by evil robotic forces, as well as encountering the rather irritable natural wildlife enemies along the way.

First and foremost, Spare Parts is a co-op platformer. EA Bright Light have ensured to sculpt the game so it heavily leans towards co-op aspect of things, to a point where it could even be said that the came discourages playing on your own. The heavy emphasis on co-op is not only present in the level structure, but further embedded in the game mechanics. For example, both you and your partner performing a double-jump whilst next to and facing each other results in a short high-five animation which fully restores both of your health meters. Or, if you are both caught in combat doing the same move at the same time, the game awards you a ‘sync bonus’. It is compatible with both local multiplayer co-op and co-op over Xbox Live, with the former offering a fairly straight-forward drop-in, drop-out – although it isn’t displayed with any HUD or set of instructions, the second player simply has to press start any time in game to jump into the action, and then pause the game and select drop-out wherever needed. 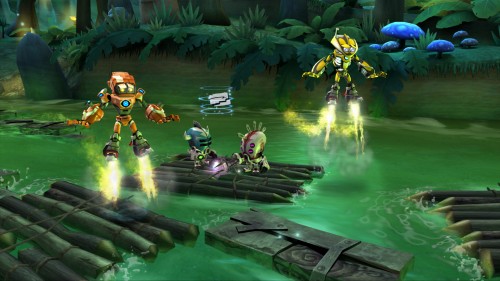 I admit, I was excited by this release. From the the things that had been said about it, it looked like it was going to be an amusing co-op outing, maybe even one of the Xbox Live Arcade greats. Sadly, the final product falls short of the mark. Employees at EA Bright Light said before Spare Parts release that they wanted to blur the line between Xbox Live Arcade games and full retail titles: they wanted people to look at Spare Parts and be unsure whether it was a downloadable title or a shop release – and at least this much is true. The graphics are fantastic for an Xbox Live Arcade game, and set a good standard on the service with it’s crisp 3-D enviroment. Unlike other games, it doesn’t conform to the generic background settings we’ve seen a thousand times (a factory level, a cave level, a lava level, a jungle level etc.). Or at least if it does, it executes it a lot better with some evident variation in each of these common zones. Such as if you’re exploring the jungle, you will notice changes to the sceney, the setting, and without wanting to talk it up too much as it’s basically just light, medium or dark, but the lighting of each region is reflected in the graphics as well.

EA Bright Light has also put in some hard work trying to add some feeling to the game, to build fondness for and a sense of attachment to the characters. The two main characters, Mar-T and Chip have been characterised and given personalities through the introduction of eyebrows to convey their facial expressions. Their movement has also been humanised in an attempt to generate empathy for the protagonists. Even narrator Con-rad, voiced to Shaun of the Dead and Hot Fuzz star tries to bring some of his humour to the table, cracking the occasional joke. 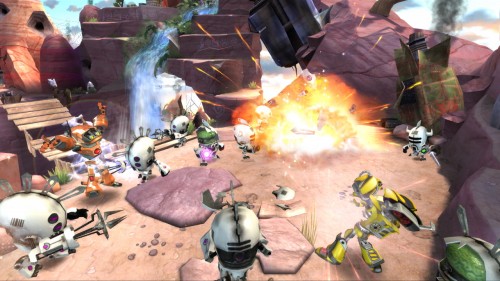 But unfortunately empathy for these characters doesn’t last long. The game starts off at a lingering snail-pace. This  is understandable – most games have a tutorial phase for you to get to grips with your new game. Unfortunately, you soon come to realise that Spare Parts’ tutorial phase spans the entire game. You even soon come to dislike the once likeable Simon Pegg for his constant interruptions to the flow of play, halting your progress as gameplay stops and the camera pans to some confusing angle of a part of the level as Con-rad utters a mildly useful comment. These intrusive stoppages pretty much sum up the game, as the levels adhere to this stop and start structure, with very short, basic levels which are finished almost as quickly as they were loaded. 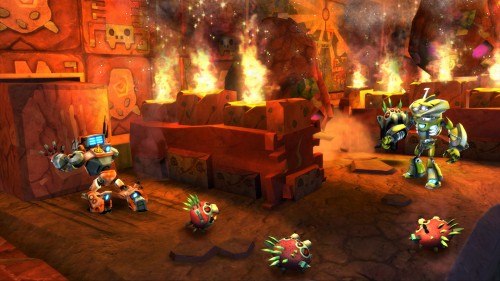 As a bonus, when returning to levels to go back and collect all the spare parts you missed the first time around in order to 100% complete the game, the irritating narrator poses less of a strong presence mean the game can have some form of flow. But sadly, the gameplay just isn’t up to scratch: dated platforming combined with basic puzzling and average combat does not make for the outstanding game expected, all topped off with a linear level structure featuring constant invisible walls that stifle any aspect of exploration or freedom. It won’t prove remotely challenging for any gamer worth their salt, and even young children will probably still breeze through the campaign without much difficulty. That said, collecting each and every collectable and amassing enough in-game currency to buy all upgrades can inject some extra life into the title, but even so, it’s still rather short-lived.

Although the verdict may seem like one of resounding negativity, this is only because expectations were raised high through the presentation and concept of the game. In actual fact it’s not a bad game, it’s just a big disappointment. It certainly shouldn’t be played single-player and poses about as much of a challenge as starting up the game and switching on the controller to play, but segments of quality shine through on occasion. As a co-op adventure it’s definitely bearable, and with basic levels and simplicity throughout, it makes an ideal kids game, or even if you are a fairly accomplished gamer but have a son/daughter/brother/sister to play it through with, then it can provide a few laughs and a weekend’s entertainment – quite sufficient bearing in mind it is only a downloadable game.