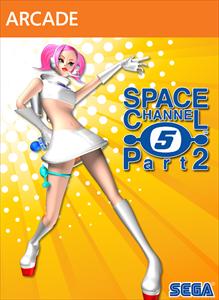 Hey Spacecats! Welcome to Space Channel 5 Part 2, the groovy follow up to Space Channel 5! Today I’ll be taking a close look at the game and it’s super hot right now protagonist – Ulala! Someone tell that girl that mini dresses and pink hair were so 1999.
Sorry. I’ll be normal now. I promise.

Space Channel 5 Part 2 is a rhythm based dance game, blissfully free of motion control and plastic props and totally unafraid of being colourful, crazy and fun. Of course the title will be more than familiar to some, with Space Channel 5 and this it’s sequel originally released on the Dreamcast and PS2 all the way back at the turn of the millennium. The experience that fans will remember is unchanged but for the graphics, given a 720p upgrade as part of SEGA’s digital upgrade of their Dreamcast library.

The set up for all this dancing is a barmy one – Ulala, host of Ulala’s Swinging Report Show, is in the wrong place at the wrong time when evil dance troupe (you heard me) the Rhythm Rogues capture Space President Peace. Hauled off by Rhythm rogue leader Purge and imprisoned inside a giant robot, it’s Ulala’s job to get him back. But oh no! That’s just a distraction! What Purge really wants is to steal a transmitter from all the TV stations and build a giant evil device that makes people…dance uncontrollably! Oh no! 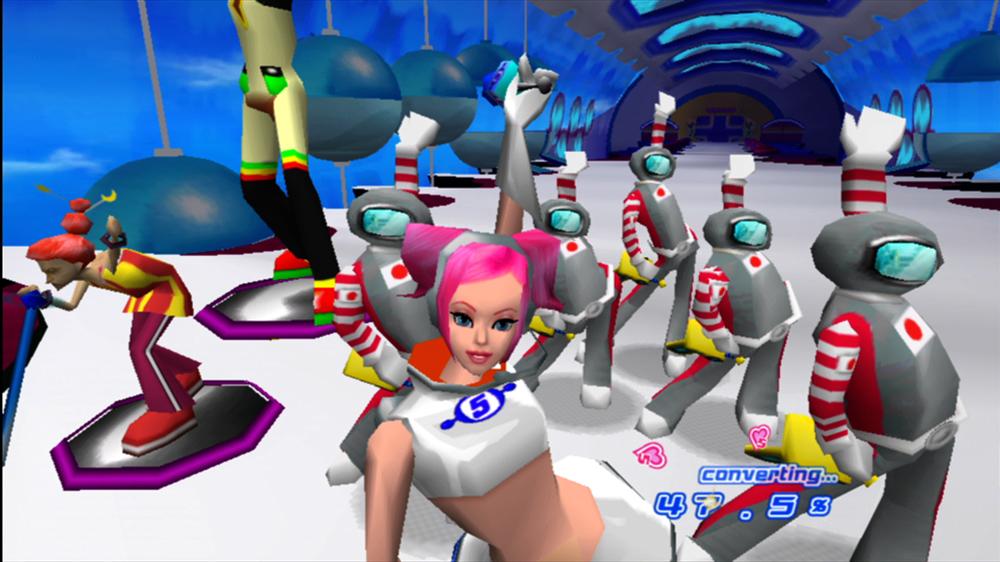 The control system is a simple one, with players inputting sequences of moves in time to the beat of the music. Directional buttons produce standard dance moves whilst the face buttons control the “Chu!’ and ‘Hey!’ of Ulala’s pistols. These are used to shoot down enemies and free hostages, with the latter shooting out a blast of pink cartoon hearts. Chaining moves together successfully builds up the viewer rating which is neatly converted into health meter like stars for the boss battles.

Every move you make is narrated, once by the bad guys, again by Ulala. This leads to a cacophony of “Up! Up! Down! Chu! Down! Down! Up! Hey! Chuuuuuuuuuu Chu!” that will probably drive other occupants of your house insane. Occasionally it can be a bit difficult to catch what the characters are saying, with left and right becoming a bit indistinguishable at times (cheerleaders and operatic plant lady, I’m looking at you!). The game thankfully also provides a lot of visual clues, with enemies appearing in the sequence order and lights flashing to remind you what to do. I know for a fact my musical ability is about zero, so I was definitely watching more than I was listening.

Long memory taxing sequences can quickly disappear in the favour of two step reaction time duels, and the game does a nice job of mixing up the play with guitar duels and sing offs. 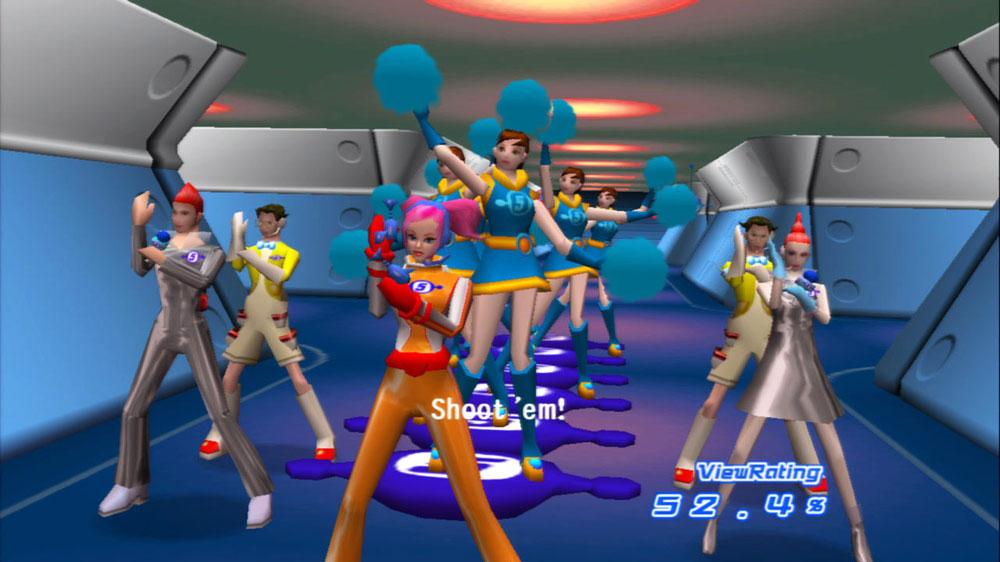 It’s a fun and engaging game whilst it lasts, but ultimately there’s little replay value in it. The difficulty does crank up a notch for the rhythmically challenged (re: me), but in the end it’s nothing that a few quick replays won’t fix. The control system is just too simple to allow for anything truly difficult, and when you get into the swing of things the levels will breeze past fairly quickly – the whole single player will probably take a couple of hours at the most.

There are a couple of other modes to bolster it up a bit – a 100 level challenge mode and co-op campaign – but the challenge mode is just a stripped back version of the main game and the co-op is more irritating than it is fun, given that players have split control of a single Ulala.

What the game really survives on is it’s unashamedly camp and quirky style, and it’s that which will hook you for the first play-through (or send you running for the hills). 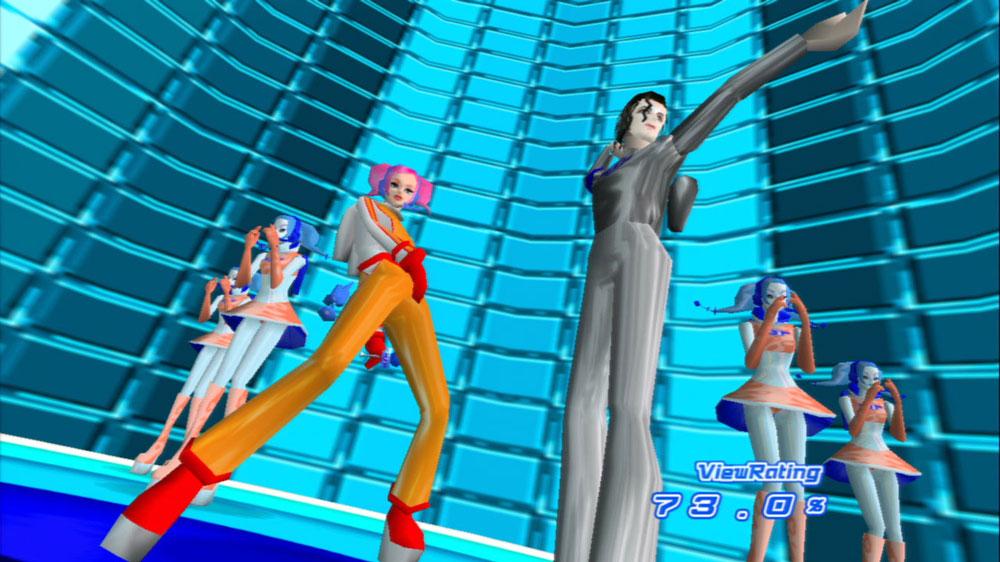 The world of Space Channel 5 is bright, 70’s and sci fi, with a healthy side in bonkers.  I genuinely had to stop playing at one point when the appearance of one character set me off on a laughing fit. It’s saccharine sweet and ridiculous, but somehow it pulls you in. Ulala will rescue cheerleaders and primary school kids, fight tentacled monsters (“OOh! Not there!” she shouts when grabbed) and robots, jam with a rainbow guitar and sing with Space Michael. And yes, that is actually Michael Jackson. The voice work is a little on the dodgy side but it all works with the tone of the game – this is light entertainment, nothing to be taken seriously!

Crucially the music is varied and catchy, with a handful of different styles to mix up the gameplay and catch you out with some different beats. There are the usual dance numbers, some Michael Jackson moments, and even a bit of waltzing thrown in. Ulala will be dancing away with an ever growing entourage of back up dancers, with random appearances from synchronised swimmers, fellow reporters and the ‘Eastern Venus Space Police’. Every time you think it can’t possibly get stranger it does, keeping things bizarrely entertaining as you progress. 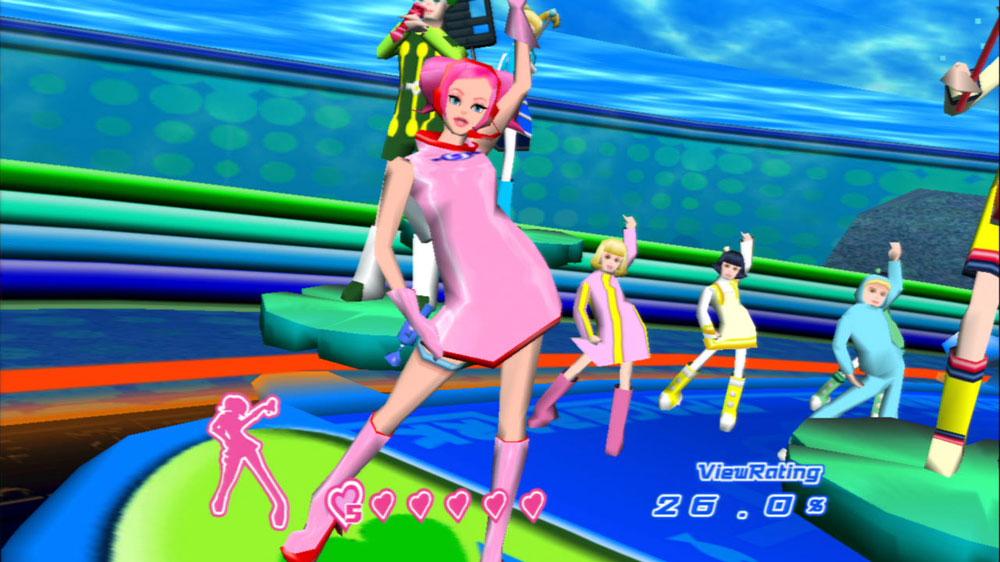 As per usual with HD upgrades, the 720p makeover here is something of a skin deep one. Everything in game has basically been smoothed over and shined up, but it still looks pretty good thanks to the cartoon style and bold colours. The big let down though are the pre rendered scenes, which haven’t been touched since their original Dreamcast days. They display in a cramped ratio that suddenly makes you very aware that this is an old game, and they look terrible on modern screens. That said they aren’t a big feature of the game, and everything else has been given a glossy coat to hide the fact that this game is nearly ten years old.

Space Channel 5 Part 2 is a short burst of colourful fun, boldly designed and full of bizarre moments to keep you hooked for a few hours. It is however an example of style over substance, and one bout of good fun can’t override the fact that it is a rather brief game. Genre fans or Ulala admirers from past releases will no doubt enjoy it, but I can’t help but think it would have been a stronger release bundled alongside it’s predecessor or another Dreamcast upgrade.