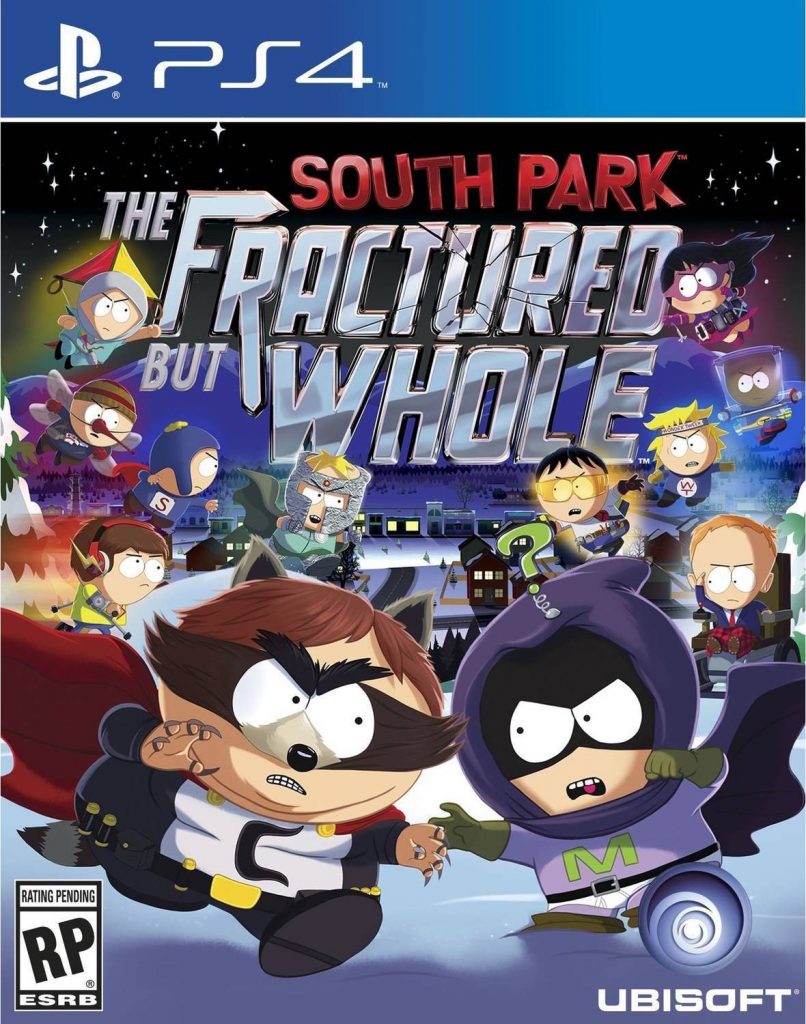 After multiple delays, the latest South Park RPG is finally here. Fantasy battles are out of fashion, and the boys of South Park have their eye on starting their very own superhero franchise to rake in the big bucks. It’s superhero civil between Coon & Friends and the Freedom Pals as the New Kid takes on the role of the farting vigilante that is destined to save South Park.

South Park: The Fractured but Whole is essentially an interactive South Park movie. The script won’t win any new converts to the series, but it is brilliantly written. The dialogue is sharp and pays tributes to all the video game and superhero tropes. In true South Park fashion, the humour is crass with plenty of toilet humour. Yet at the same time, anyone willing to drill deeper into the story will be rewarded with incredibly smart writing. I am impressed with the thought that has gone into creating each superhero alter ego. While I may not know the characters very well from the show, the writers do an excellent job of channeling personal motivations that inspire each super hero alter ego while mixing it with a bit of South Park whimsy. A character like Captain Diabetes who turns his illness into his source of strength is serves as a great counter balance to the game’s crass humour. While many gamers may not experience it, South Park: The Fractured but Whole is likely the first narrative-based game from a major developer that actually offers the opportunity for The New Kid to identify as transgender. I am pleasantly surprised how well the writers handle the matter. They give it just enough screen time to make it relevant to The New Kid’s identity, without having transgender consume The New Kid’s entire identity. South Park: The Fractured but Whole’s social commentary extends well beyond gender, exploring themes like race, religion, addiction, parenting, and policing. There is a thoughtful and well written story tucked neatly under all the layers of pop culture references, cursing, and references to sex and bodily excretions. 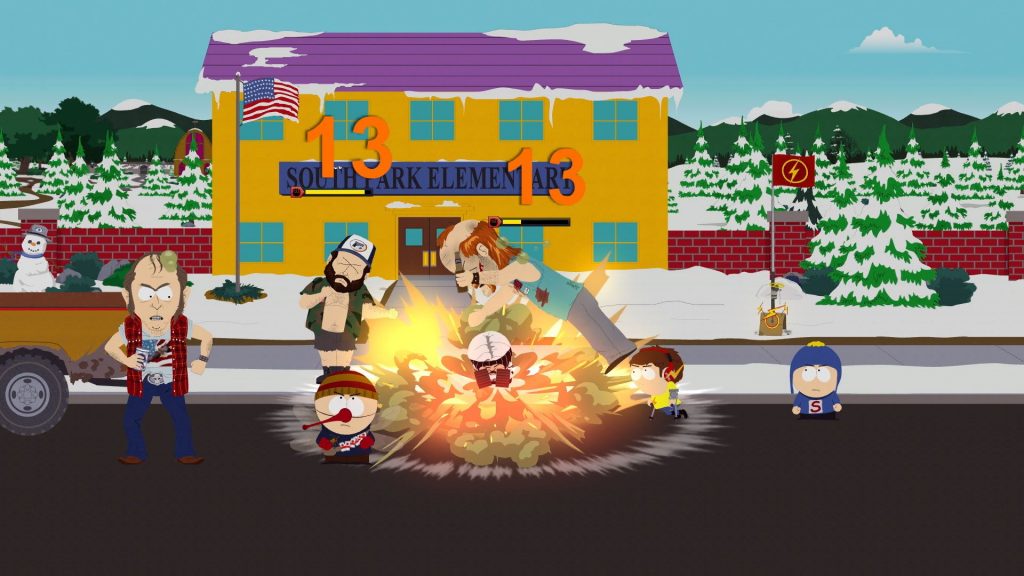 South Park: The Fractured but Whole is a turn based RPG with light tactical elements. The game mechanics are designed to be approachable enough that video game newbies who are picking up their first game because they like the show won’t be overwhelmed, but the game has just enough depth to enjoyable to most RPG veterans. Character creation is simple. Players start off by picking one of the three starting classes. Each class has three basic skills and an ultimate skill that can be used when the meter fills up in combat. Each skill is tied to the game’s basic offensive stats of brawn, brains, and spunk. Every level unlocks artifact slots. Each artifact awards a flat boost to the base character stats and one or two secondary stats. Later in the game, DNA mods lets players begin to do some general optimization for their character’s base stats. As the game progresses, players are able to multiclass, allowing them to mix and match their four skills from an ever-growing library of skills.

Combat is turn based in South Park: The Fractured but Whole. Players will need to instigate combat if they want the first strike and possibly inflict a status effect or two in at the beginning of combat. Each player character has three basic abilities that can be used at any time and an ultimate ability powered by the ultimate meter. The meter fills as players deal and take damage. Every ability has its own attack pattern and range. Like many tactical RPGs, success hinges on smart use of status effect and character positioning. South Park: The Fractured but Whole is on the more forgiving side of the spectrum since more advanced features like line of site and flanking are absent from the title. The game features a critical system that adds an extra layer of interaction. Hitting the action button when prompted will let players deal a little extra damage or heal some of the damage taken plus provide a very healthy boost to the ultimate meter. There are three levels of combat difficulty, which is completely separate from the skin colour “difficulty” setting at the beginning of the game. Personally, I find the normal difficulty to provide a decent challenge that requires some strategic thinking. While South Park: The Fractured but Whole is not the most challenging or complex RPG in existence, it is very easy to learn and still fulfilling enough to stay interesting. 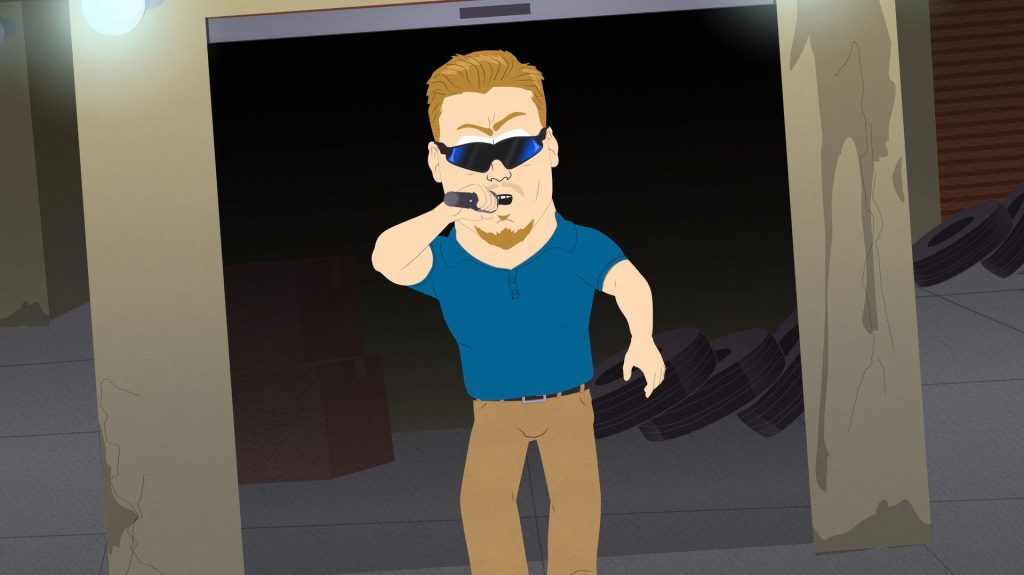 Probably the most frustrating part about South Park’s combat system is the lack of variety in enemies in combat. There are different groups of enemies such as the sixth graders and the Chaos Minions. Often times, players will deal with long stretches of the game where they will see the same enemies over and over again. There are no random encounters, which helps limit some, but not all of the repetitiveness. The boss fights, however, are an absolute treat. These multi-phased battles often have some hilarious and challenging mechanics that shake up the game’s combat.

The town of South Park is your playground. As players progress through the story, more parts of the town are unlocked. How the developers have opted to progressively opens the map is one of the game’s great annoyances. There are significant chunks of the game where two adjoining neighbourhoods are available for exploration, but some sort of environmental hazard that can only be cleared later in the game blocks the direct path. Until that clearing skill is acquired, players are stuck taking a roundabout route of fast travel points and old fashioned long walks on the pavement. There is a lot of exploring to do in South Park: The Fractured but Whole. The game is packed with crafting items and collectibles like Tweak and Craig yaoi art and costume pieces to discover. There is a toilet mini-game where players need to input variety of combinations that can get downright devious at times. While the mini-game it completely optional, it is a bit too easy usually and gets repetitive very quickly. There are some solid environmental puzzles that make great use of the game’s buddy skills and fart abilities. 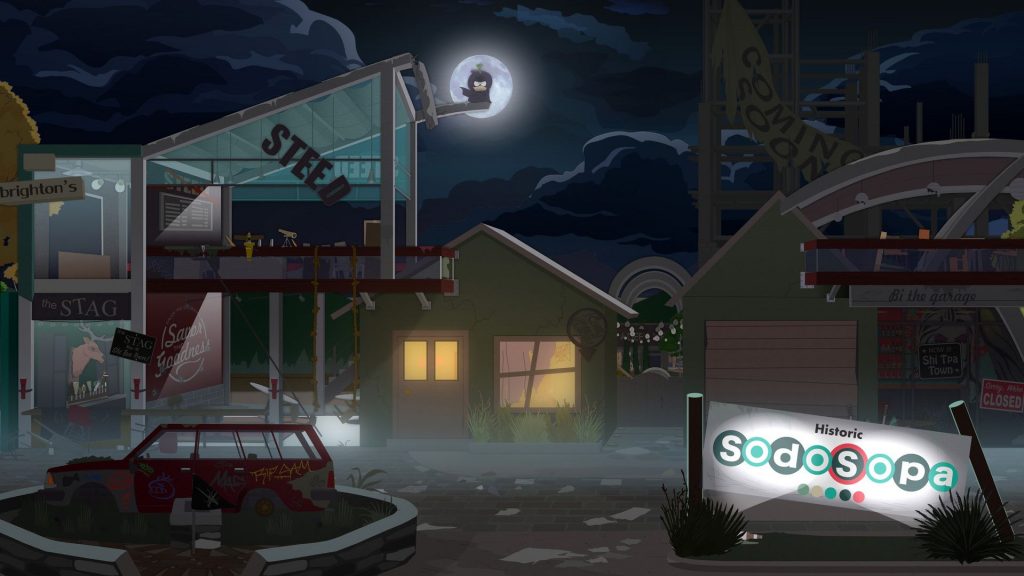 South Park: The Fractured but Whole relies on its crafting system to provide most of the consumables in the game. There are vendors almost everywhere in town, and every building seems to have a plethora of items to loot. It feels like there are hundreds of individual items, but they all fall under a few basic categories. For the exception of the more powerful items, most items simply need a few categories to craft versus specific items. The sheer volume of items to loot kills a bit of the excitement of looting, as it seems like emptying every drawer and cupboard in a house becomes more of a chore than a rewarding treasure hunt.

South Park: The Fractured but Whole was meant to be played on with a controller. The game is perfectly serviceable on a mouse and keyboard, but the mini-games were designed for controllers in mind. The keyboard variations to these mini-games are usually a dull afterthought in comparison. 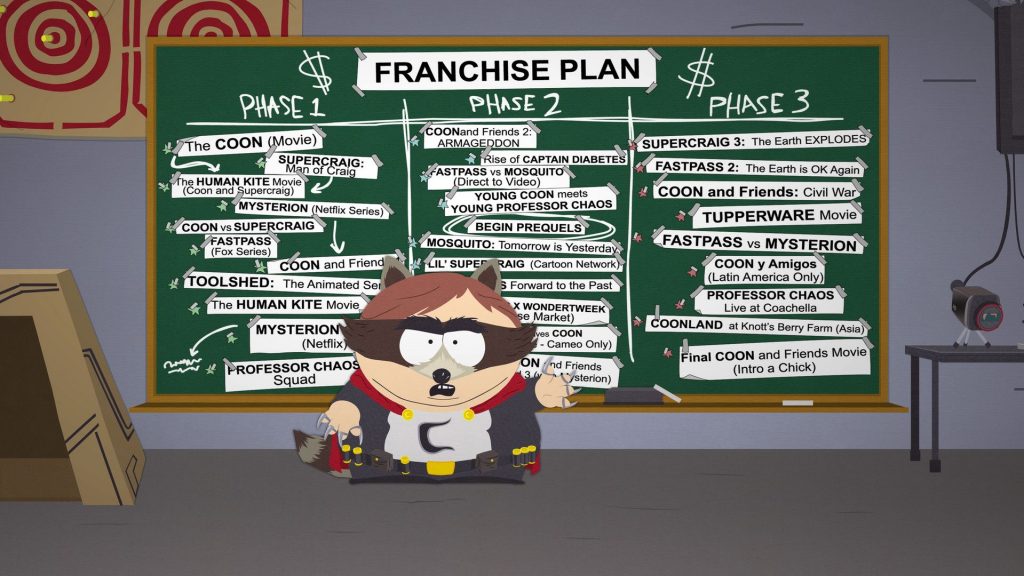 South Park: The Fractured but Whole shines visually. The game looks like it could be used to record a TV episode for the show. The animation and textures are all spot on. I really like the subtle use of the colour to signify interactive items in the environment. On the technical side, the game uses the Snowdrop engine previously used in Tom Clancy’s The Division. While South Park: The Fractured but Whole isn’t the most taxing game in the world, I didn’t encounter any issues with the game during testing. 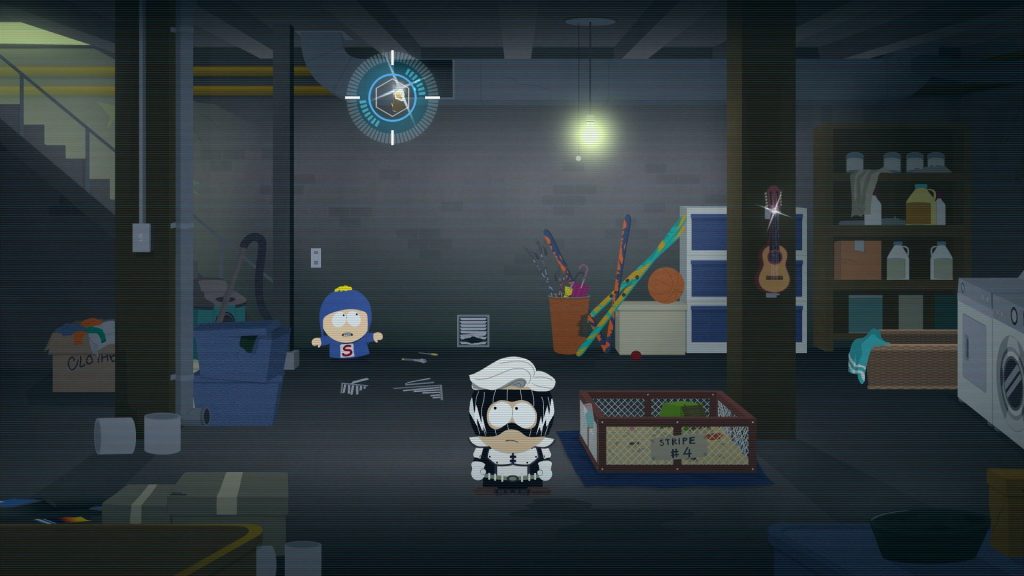 South Park: The Fractured but Whole is a solid tactical RPG meant to cater to the widest audience possible. It is easy to learn with well executed, though slightly basic mechanics. There are a some rough patches where the gameplay feels a bit repetitive, but it is easy to forget about them with the game’s strong writing and solid audio/visual presentation.

South Park: The Fractured but Whole is cleverly written with solid, accessible gameplay that could easily pass for the next South Park movie.
8