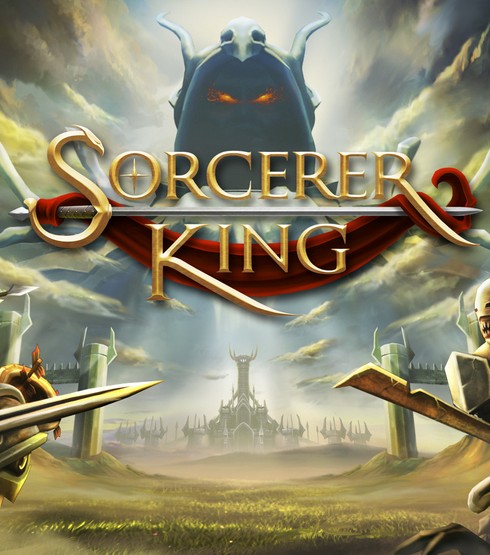 Stardock Entertainment is continuing their Elemental story arc with their latest title, Sorcerer King. The game is a slight departure from the traditional 4X genre as it mixes fantasy 4X and RPGs, then throws in some tactical turn based battles for good measure. It delivers a brand new concept that starts players as a small time city leader looking to amass an army under the nose of the all powerful Sorcerer King. 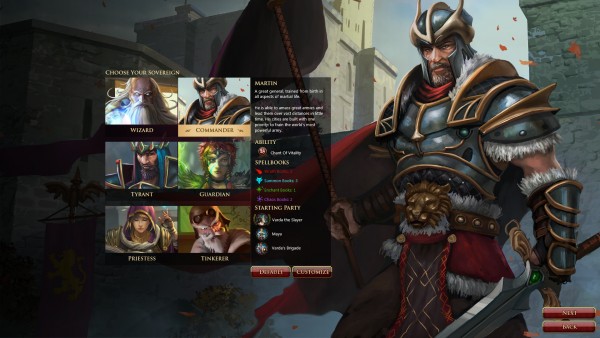 The Elemental franchise kicked off in 2010 with War of Magic, which laid the foundation to the world. The next two titles followed the rise and fall of new heroes and villains, capping off with Lord Relias, Procipinee, and Mirdoth rising to power. Sorcerer King takes place 200 years after the events of Fallen Enchantress: Legendary Heroes. Mirdoth has spent the years mastering Curgen’s Bane, the artifact that help him beat the Fallen Enchantress. His desires have taken a turn for the dark side and as he seeks to use his new found powers to turn himself into a god. Mirdoth, now known as the Sorcerer King, has crushed the game’s many factions and have reduced them to only a single city each. He now seeks to use the magic within the Shards to cast the spell that will grant him his immortality and destroy the world. 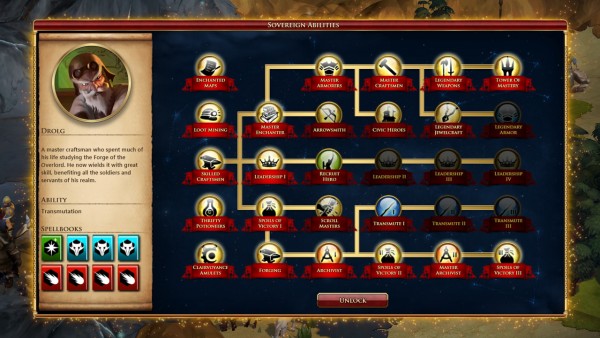 Sorcerer King’s plot is told through the campaign mode, which slowly introduces players to the remnants of each faction. The player’s interactions with their emissaries serve as the main vehicle to plot development. For a 4X title, there’s a good amount of story involved. The writing is decent, though a bit unexpected. As a newbie to the series, I fully expected an extremely serious and grim presentation. Instead, a serious portion is tongue in cheek, sassy, or just plain silly in the Monty Python sense. Personally, I wasn’t a huge fan of the humour.

Sorcerer King’s core is a 4X fantasy. It feels more accessible than most 4X RPGs I have played recently. It is generally quite straight forward due to its simplicity; however, players are more than welcome to roll up their sleeves and do a tinkering when it comes to magic resources. 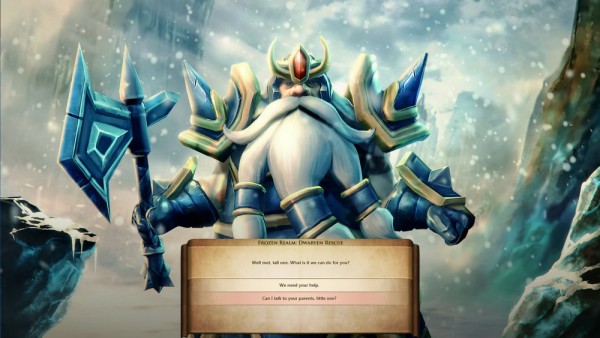 A selection of pre-made maps in a variety of sizes, including the campaign, is available along with a map generator. There is a generous number of options that will let players tweak the difficulty setting for the game, which will suit the greenest of newbies. Once a map is selected, players have a pick of six different sovereigns, each with their own talent tree. Stardock likens these talent trees to technology trees from most 4X titles. Each sovereign has a default loadout and army, but these too can be customized. The sovereigns are quite varied in their tech trees and tactics, so every player should be able to find someone that suits their tastes.

The Sorcerer King definitely changes the dynamic of the game. As the game progresses, the Doomsday Counter slowly crawls forward, with the player’s actions adding or subtracting from the counter. Grow too quickly and too blatantly, and the Sorcerer King will squash the player with his forces. To help the player through their weakened start position, maps are filled with small side quests that will let players recruit units to their cause, other factions can be convinced to aid in the player’s quest, players can research and cast a variety of helpful spells, and most importantly, the Forge of the Overlord. With materials scavenged from across the map, players will be able to equip their units with armour and accessories that can be enchanted, strengthening units beyond simple levels. Each sovereign starts with one hero unit that have their own skill trees. Unlike regular units, heroes can also equip weapons, making them as powerful as two or even three regular units. 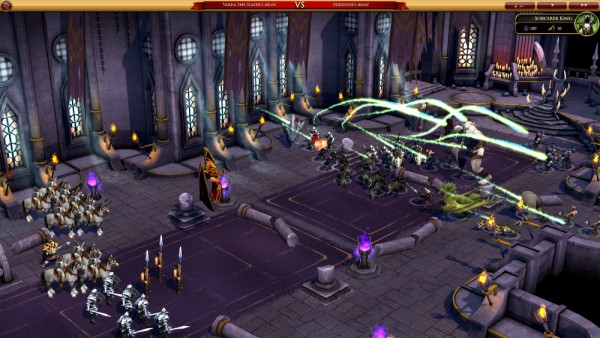 Combat is played out as a turn based strategy RPG. Units act based on initiative and take turns moving and attacking each other. The battlefields are quite small, so things can get a bit cramped with two large armies duking it out. On the flip side, the smaller battlefields mean the fights tend to be on the short side. As armies become more powerful, lopsided fights can be automatically resolved to save time.

Sorcerer King takes a lot of gameplay mechanics from different places and does a great job of putting it all together. The Sorcerer King plays an interesting role that shapes the entire feel of the game. For the 4X nut, the fusion with RPGs is a refreshing take on a tired genre. Replayability may be a bit of a concern for some, as each game’s goal and the rough steps to get there is pretty clear cut. 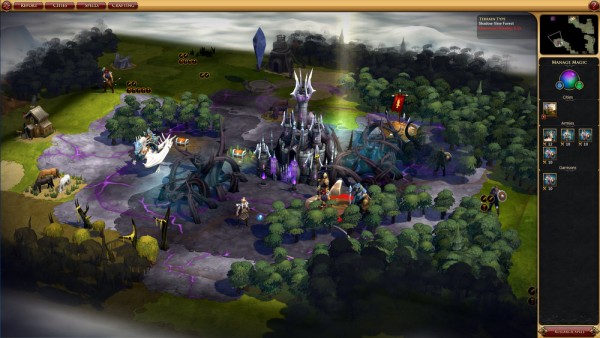 Sorcerer King has huge potential to be the gateway drug to 4X games with its heavy RPG elements and relatively simple mechanics. Unfortunately, it falls victim to the same problems as 4X titles tend to share when it comes to bringing new players into the genre, the learning curve sucks. The in-game tutorial is strictly conveyed through a rather oblique quest log and in game tips that are purely focused on the current context, which leaves newbies feeling pretty lost. Annoyingly, a proper beginner’s guide can be found on the game’s forums, complete with recommended maps and settings to start out with. I would have liked to see the beginner’s guide put into the game somewhere to help cut down on the learning curve a bit. An even better idea would have been easily slashed if a heavily scripted or extremely shortened level that quickly held the hand of a new player through the basic arc of the game, from starting out through to defeating the Sorcerer King. 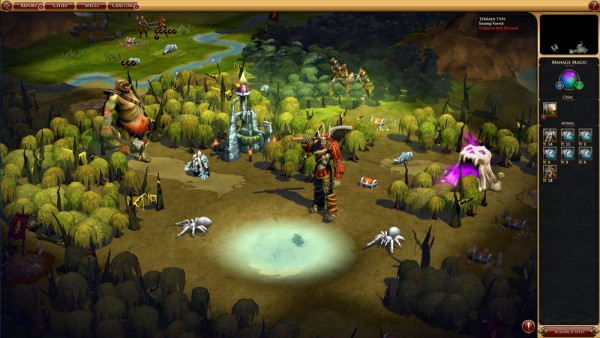 Sorcerer King delivers good graphics, but lacking a bit in variety. Unit animations are very good, with plenty of visual stimulation during combat. The art style is a bit cartoony and simple, but it fits the game’s penchant for comedy. There are a few graphic options available that can be adjusted in game, but it’s a bit sparse.

Sorcerer King has a strong epic soundtrack fit for a fantasy game. The sound effects are solid. I am a little disappointed at the minimal amount of voice acting. 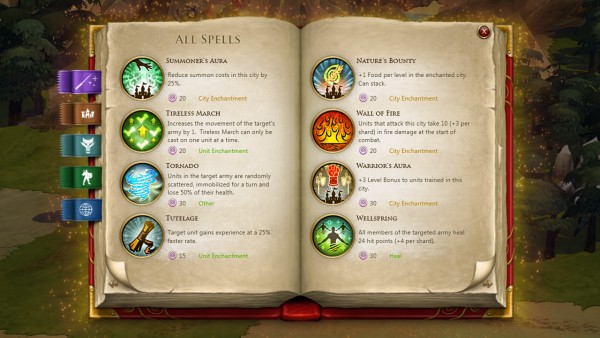 For fans of the 4X genre or fans of Stardock’s previous works, Sorcerer King is definitely worth a play. Stardock took a chance and tried something new by mixing RPG and 4X gameplay, and they did a great job at it. Playing as a weak underling of the Socerer King that is committing treason right under his nose is a great concept that works surprisingly well. Unfortunately, for RPG fans or people new to the genre, the decision to play is much more unclear. Like other 4X titles, it is extremely unfriendly to new players and I believe Stardock could have done a much better job to help out new players. Long term replayability is a bit questionable with the game’s rather clear cut final objective, which may give some gamers a pause.