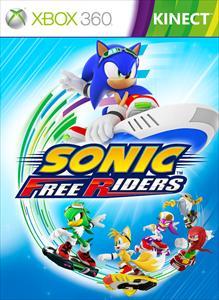 Story
“Sonic is speeding onto Kinect™ for Xbox 360 in an action-packed experience unlike any other! Become your favourite character as you jump on your board and get ready to compete in exhilarating, adrenaline-fueled races against tough competition. For the first time use full-motion body control to twist and turn your way through a range of visually stunning courses. Hi –octane fun for ‘riders’ of all ages, Sonic Free Riders brings extreme lightning-paced boarding action in a main event you won’t want to miss!” [Via Xbox.com]

There isn’t much of a story located in this game and the only character development consists of the Sonic Characters bad mouthing each other between races. The sonic characters present within the game range from extremely famous all the way to lesser know characters; however, they are all sonic characters and any sonic fan can find a favorite among them. The bare bones of the story includes the Sonic gang relaxing like normal,  when the Babylon Rogues start bugging them. Sonic and friends must use hoverboards to teach these rogues a lesson once and for all. Along the way, Dr. Eggman and the emerald crystals come into the game, but that is to be expected in a sonic game. If all of that seems complicated, thinking about it as a simple hoverboard competition sums up everything perfectly. 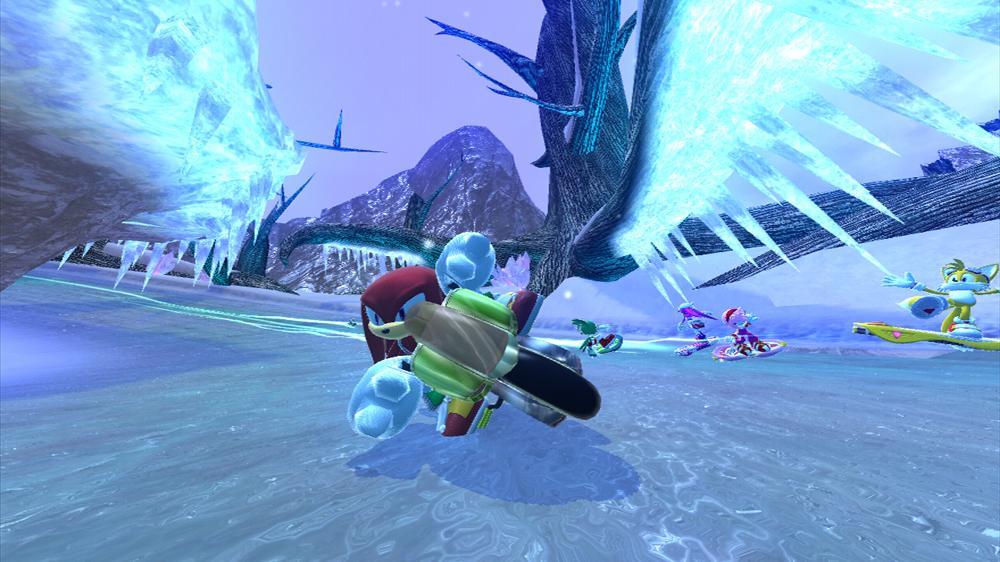 Gameplay
In order to play the game, the Kinect device for the Xbox 360 is required. A majority of the game is played with your body perpendicular to the TV as if you were riding a skateboard. There are some vehicles that have you standing parallel to the TV as if you were riding a bike, and while these are easier to control they don’t seem to give the same enjoyment as the hoverboards when it comes to playing. The game has a bunch of different levels and powerups to give variety to the gameplay. Powerups are all activated by moving your hands in the fashion that you would expect to use the particular powerup. This is a nice addition that makes using powerups fun and simple. Tons of boards and gear to unlock also leads to a bunch of replayability.

The major problem with the game is that there are tons of problems with the controls. The motion controls make it hard to just jump right in and understand what you are doing. Even after a good chunk of playing, I was still regularly bumping into walls and having trouble doing kick boosts. The menus are also a horror to navigate and are only saved by the voice controls. Kinect seems to be poorly implemented into the game, or at the very least not streamlined properly. Of all the games currently supporting kinect this one is pretty low on the totem pole when it comes to the controls, but it is still not the lowest.

There are a bunch of multiplayer modes located within the game for online or even on the same TV. Whether you are with a bunch of friends or just a few friends, there is something for  everyone. Up to 4 players can play on the same TV with relay mode, and there is even cooperative modes where two players must work together in sync to get past the levels. Once you get bored of the singleplayer experience, hop online for even more hours of enjoyment with friends or play with the family on the same TV. 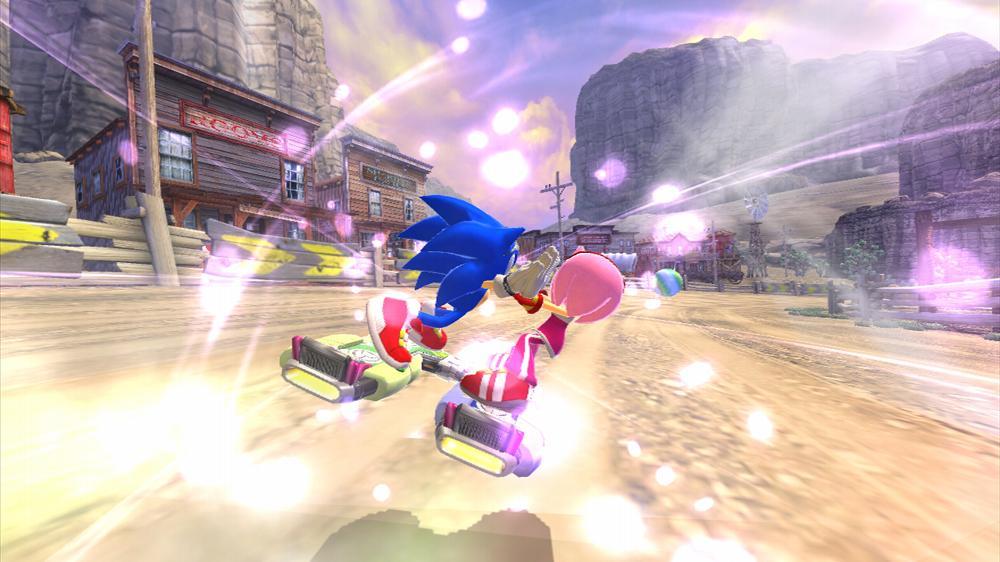 Audio & Graphics
There are new voice actors for every single character and for once this is a very good thing. All the characters now sound like they should and tails finally sounds like a kid. While the voice acting is the most noticeable audio in the game, there are also a series of sound effects and background music. Sadly, the background audio is kind of annoying after a while, and all the sound effects are dull and not impressive.

The graphics on the other hand are pretty nice. The levels look beautiful and everything is shiny and well executed. Most of the cutscenes are just character stills yelling at each other, but they only make up a small portion of the game and aren’t actually that bad. The game flows well and is fast paced without being intimidating, which is a plus for a kart racing style game. 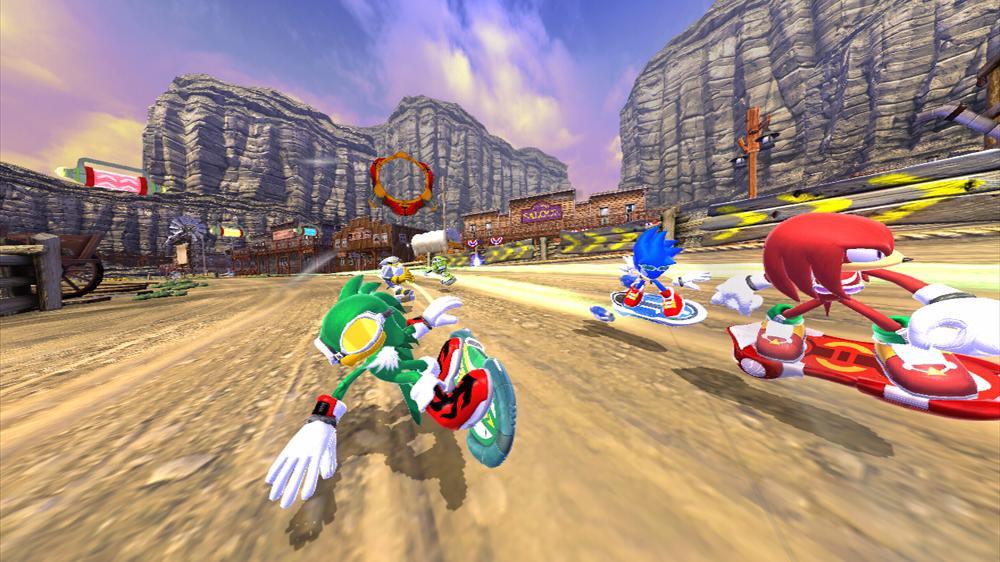 Achievements
The achievements in Sonic Free Riders can either be difficult or extremely easy depending on how well you can get the controls down. If you manage to master the controls the achievements will come rolling in, one after the other without much effort. Since the AI isn’t actually that good, the only thing that stops you from getting any of the achievements is how many walls you bump into. The achievement List of pretty easy and simply comprises of a bunch of “beat this” achievements.  There are eight avatar awards included in the game, but they are all just different shirts. There are three character shirts and then a game shirt, each with male and female variants. They aren’t that difficult to get, but they also aren’t that flashy.

The avatar Awards are: 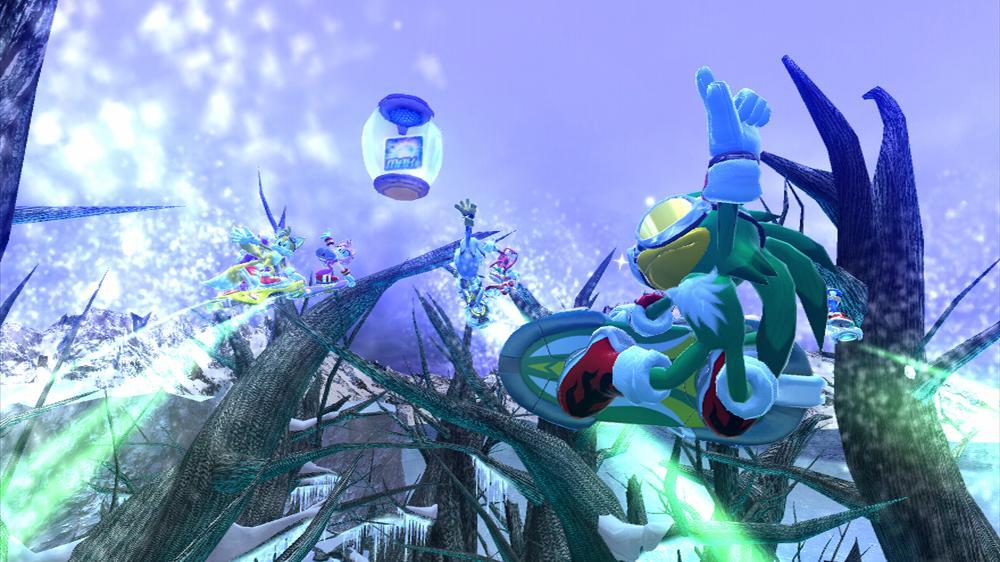 Overview
Sonic Free Riders isn’t actually that bad and once you get past the horrible controls throughout the entire game it becomes quite enjoyable. This is the third iteration of Sonic Riders and it plays like most other kart racing games with powerups, shortcuts, and a bunch of ways to play with friends. While by yourself the game gets boring pretty quickly, friends to play with will extend the life of the game. Sonic Free Riders has a lot of problems but once you get past those problems it offers a bunch of modes and tracks for a lot of fun with friends. Sadly, since the controls are so horrible until you get use to them, it keeps players from being able to instantly jump in and have fun. It will take a while for everyone to get used to the game and get good games going with each other but if you have the patience the game can be quite rewarding.
I give Sonic Free Riders