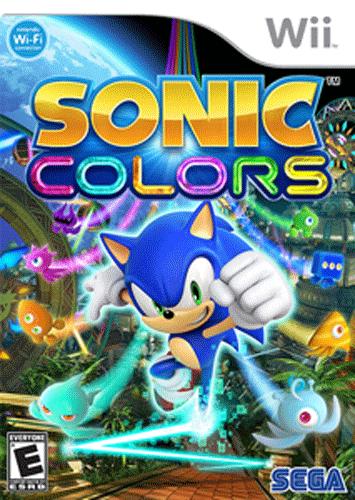 The past 10 years have not been the kindest to Sega’s mascot, some games have been misses such as Sonic ’06 and Sonic & The Black Knight, but there were also a few I enjoyed like Sonic All Stars Racing & The Sonic Rush series. Either way, Sonic is ready to make his comeback once and for all with Sonic Colors. Sonic Colors fixes many issues that have plagued the blue hedgehog since his transformation into 3D while still retaining a few bumps in the road throughout the experience, all of which I’ll touch up on. This review is for the Nintendo Wii Version of the game. 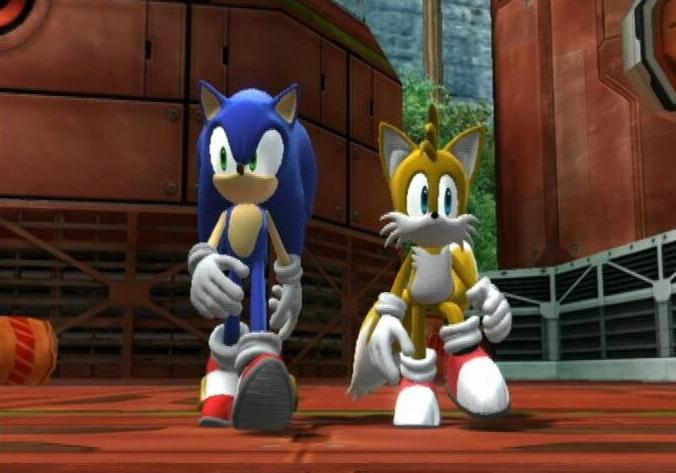 Story
It seems like most of the time the story in the later Sonic games has been aimed at kids, which honestly it always has been to start with since Sonic really got a true voice. Sonic Colors is mostly true to that statement, story-wise. The game starts you out with Sonic and Tails who are investigating a new theme park built by Eggman labeled “Dr. Eggman’s Interstellar Amusement Park”. Soon enough, Sonic learns that Eggman is really using the theme park as a way to harness the energy of little alien creatures known as Wisps.

The story stays cohesive enough throughout the game to get some entertainment out of it, but there are some cheese-tastic one liners thrown in sure to make some cringe or skip these altogether. One thing that I did like about the story was that Sonic, Tails, and Eggman occasionally broke the fourth wall at times and if you are a longtime fan of the series, there is a lot of references thrown in for Sonic fans to pick up on. This is also the best I have seen Tails (who is not playable) portrayed since Sonic 3 as his character came across as more intelligent instead of weak. Sonic on the other hand is still a bit egotistical still but nothing too far from what we have seen in the past 10 years, so it really is a matter of preference.

Also long gone is the side characters which have popped up throughout previous games and to me, that is a good thing as Sonic Colors feels smoother story-wise due to the fact you don’t have to keep up with a full rosters worth of side stories that didn’t really effect the older games in anyway to start with. 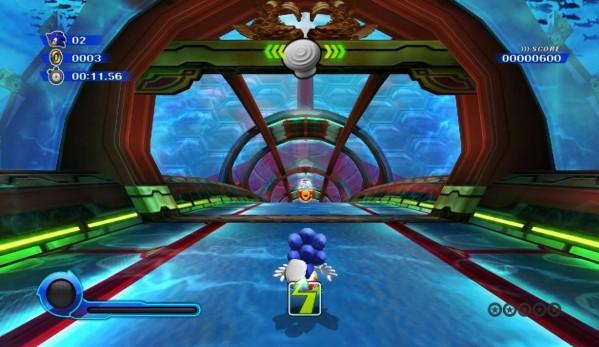 Gameplay
Sonic Colors can be played with the Gamecube Controller, WiiMote & Nunchuck, or the Classic Controller. I preferred the classic controller to the other two routes as it felt like the smoothest experience out of the three. The controls change a bit throughout the game and the gameplay is constantly changed up by the various environments and power-ups, so levels never feel the same. There is a lot to be said about the way it actually all is set out though, which can be a bit of a mixed result in some areas.

Throughout most of the game, Sonic Color’s plays as a 2D platformer, but it also has many moments where the screen will turn and it will quickly and smoothly make the transition to give you a full 3D perspective. Each area has seven acts, with that including the final act as a boss battle. Sonic has also never felt faster and long gone are the worries over keeping up with the camera behind you as the throughout each level it keeps up wonderfully and is fully automatic. Sonic generally controls well and the homing attack as well as jumping are a very polished element in the game most of the time. There are times when Sonic feels a bit floaty causing for timing on quick jumps to be missed, but this didn’t happen all too much on my playthrough.

The newly added Wisps are a great addition and allow the gameplay to change up to reach certain areas or defeat foes that lie ahead. When Sonic breaks the Wisps free he can absorb their powers and transform into different objects. From a well crafted laser which can let sonic take off, bouncing through stages off walls and through power lines, to a drill which can dig through the levels as well as even a boost for even greater speed and five other powers on top of all of that, these all perform different from the next and are actually useful when obtained. Every power played great for me except for the pink Wisp which gives you a bit of a spindash ability and lets you stick to walls which led to a bit of frustration rather than being helpful due to the fact that I would roll down into a pit a good percentage of the time. Aside from that this gimmick works great and considering some of the past gimmicks Sonic has received that didn’t fare as well (Werehog..Anyone?), the Wisps are a refreshing approach to change in Sonic Colors.

Level design by far was the strongest and weakest point in the whole experience. The early levels all play brilliantly and feel like a Sonic game should. After about the second world though, this changed and some levels developed gimmicks of their own which made the game more about trial and error rather than a quick run-through of a level. While trial and error type stages are normally fine for me, some of Colors’ stages went from perfection to a headache fast as quick pits and unexpected drops plague certain stages making you have to slow down and look before you leap. In a game all about speed, this can be a problem as it takes you out of the fast paced action in an instant.

The other level design problem was that some of the levels were just not fun to play and came across as more of a chore. For instance, in the Starlight Carnival, there is one level where you must bounce on a floating spring-pad throughout the whole level and while it was easy enough to do, it was a very boring level that felt gimped of any imagination. That was just an example, but that is the problem with the design. While some are refreshing and outstanding for any platformer on the market, others fall flat and just make the feeling of looking forward to the next area fade away.

I enjoyed the boss battles and many are reminiscent of the classic games. Later bosses will allow for usage of the Wisps if needed, but most battles are simply running, dodging, and a few homing attacks. The bosses are bit standard fare absent of much imagination, but since the better elements of gameplay were used, each are just as enjoyable to take down. After completing the game, there is a lot to do so replay value is something that should never become a problem. Each stage has 5 red rings to collect which can be difficult to obtain. These are not mandatory but work great for completionists. Added in are the challenge stages and online leaderboards giving a great reason to go back through each level to rack up a better time and score. 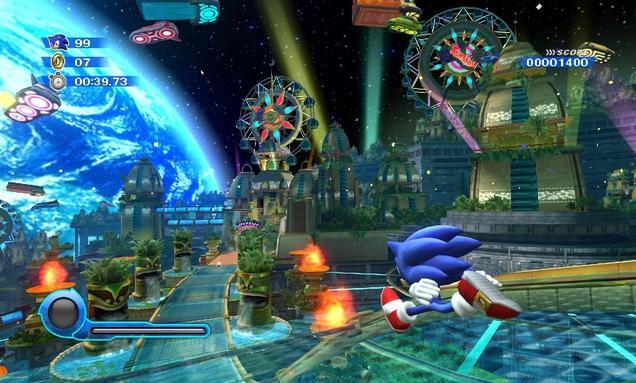 Graphics/Audio
Not every stage may be thrilling, but the visuals and presentation are outstanding the whole way through. The colors and graphical design are some of the best on the Wii and each environment feels alive as you dash through various stages. I could even say that some are a bit over designed as well as the slow paced levels have such vivid and sleek looking designs it makes you want to perform at the same speed. Little touches such as themed egg-pawns go a long way to add the icing on the cake to all of the levels. Character design also looks great as Sonic, Tails, Eggman and all of the other characters are detailed well and mesh perfectly with the game’s overall theme.

Right off the bat, I will say I do not care for the main theme. Yes, it fits with the game decently, but I just found it a bit overused and annoying to an extent. The other music in the game though is soundtrack worthy and there are a few songs I would claim to be some of the best in the entire Sonic series. Voice acting is done well, Sonic sounds about the same to me and while the script was nothing stellar, his voice actor got the job done. Tails was given a distinctively different voice this time and no longer does he sound like a female, but now an actual younger male which was great to see. Other voices such as Eggman and his two robots add a bit of humor and are well done as well.

Overall
Sonic Colors was an attempt to take the best features of the past few Sonic games and mesh them into one whole experience. The boring and bland levels as well as the returning pit-deaths hurt the experience gameplay wise though and make some of the game come off as more of a journey to find the gold buried underneath. The thing is though is that when Sonic Colors is on the right track, it is blazing. There is simply too much in the game that should not go ignored making Sonic Colors one of the better Sonic games in years.

I hear a lot of talk from the hardcore Sonic fans about a “Sonic Cycle” where all hopes for the perfect Sonic experience are held high just to be dashed by a “bad” Sonic game. Colors may or may not be for those fans as there is a lot of good in the game, while still some of the same problems with physics and level design so that is a matter of preference upon which game will ever be good enough for fans with that mindset. I can easily say though that Sonic Colors shined through as a glimmer of hope that Sonic Team and Sega are on the right track with this flawed yet still outstanding experience. The $50 price-tag may be a bit steep considering these flaws, but as a whole this is one colorful experience no fan of the beloved blue hedgehog should go without.

I Give Sonic Colors for the Nintendo Wii: