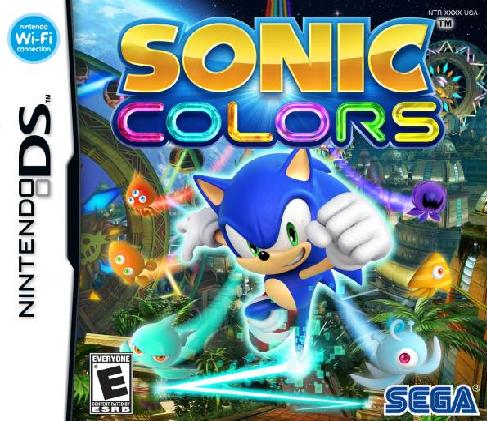 When it comes to portable “ports” of games that also hit consoles the same day of release, the final product is usually a cheap, quickly thrown together mess that is barely playable. Sonic Colors completely shatters this way of thinking though with the DS version of the title. Made by the makers of the Sonic Rush series, Sonic Colors for the Nintendo DS should not be considered a port or watered down version of Colors for the Wii by any means as it shines even a little brighter than it’s console brethren under the same name. Here is my review for Sonic Colors on the Nintendo DS.

Story
The story is nearly the same for this version of Colors if you compare it to the Wii version, just told in a different way. Dr. Robotnik…erm..Eggman is building an Interstellar Amusement Park as a cover to harness the energy from the alien species known as Wisps and it is up to Sonic to stop him. Nothing really more or less story wise but the story is actually a bit easier to follow this time around.

Instead of fully animated cutscenes, most of the characters dialogue is told with images and text. This method for me actually made the game have a better overall flow and kept the overall story progression a smooth process. There is a bit of voice acting mixed in, but nothing really more than a few quick lines from time to time which mainly is used to set the tone for the character who is talking. There still are a few cheesey bits of dialogue as well, but nothing you haven’t seen before if you have played any other Sonic game in the past 10 years. 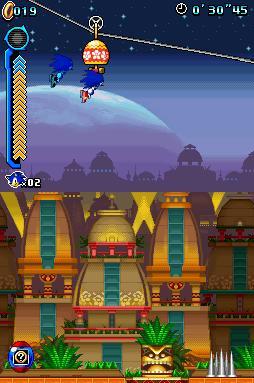 A few of the newer characters also make appearances as well such as Cream the Rabbit and Silver, but fret not as these cameos really don’t tie into the story at all and are mainly used for bonus missions.

Gameplay
Sonic Colors for the Nintendo DS plays completely in 2D throughout the whole experience. The touch screen is used throughout small sections but the D-Pad along with the standard four button layout work well to control the game as they are used for all of the main stages nearly the whole time. Colors DS also fully utilizes both screens on the Nintendo DS throughout each level as both screens are used in the level design. This method will take some getting used to as looking up and down can be a chore at first, but after about an hour I stopped noticing as the game moves so fast this method becomes second nature.

The level design for Sonic Colors DS is where the game truly shines. The game is set up nearly the same as the Wii counterpart, but every level is set up more like a classic Sonic game and never throws in too much of the same thing keeping the experience nostalgic and fresh the whole time. In the Wii version, I felt a few levels threw off the pace of the game by adding an unnecessary gimmick. The portable version rids the game completely of those moments and kept the feeling of a classic Sonic game (with a bit of a Sonic Rush twist) until the end. There are still some sections of trial and error but I never ran into a pitfall or any other glitch that hurt the overall feel of the game. Also speaking of the level design it would be a shame if I did not mention the clever placement of obstacles and interactive portions which can have you jump off Jello, fly down a waterslide, grind on rails, and many more stage additions that made me look forward to what was around the next corner because these are all a blast to play and are included so often which give each act it’s own feel. 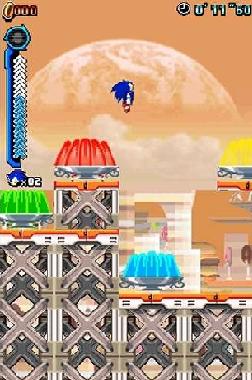 The Wisps are of course the main plot and gameplay point to Colors. The Wisps control just as good if not better than the Wii version, except now there are four less and two extra exclusive Wisps to absorb. Each gives Sonic the ability to transform or take the powers to better reach the next area, break through walls, or defeat certain enemies. The placement of the colored Wisps was really effective and actually useful each time I encountered them. New Wisps such as “Red Burst” which turns Sonic into a fireball and “Violet Void” which sucks everything into a black hole such as rings and Wisp power are spectacular additions which got me through a lot of tight spaces along with the standard four power-ups in the game. Wisps work great, but a lot can be said about Sonic’s own abilities. I’m talking positive aspects by that of course. Sonic’s homing attack, jump, and re-incorporated spindash are utilized perfectly and never break the flow of a level keeping each act moving along nicely.

Difficulty is extremely varied in the game as some stages are easy to just fly through, others can be quite a challenge. Boss Battles would be the best example as there is a lot of strategy you must use to take down the main foe from each world. Overall though this range of difficulty does wonders for the feel of the game and keeps the player on their toes for whatever unexpected challenge is ahead.

Remember the “Collect the Rings” 3D bonus stages in Sonic 2? Those are back as well in Colors DS being the main touch-screen controlled element of the game, and of course to get the emeralds at the end as well. Instead of collecting rings though you must collect a certain amount of a particular color of orb, then move to different colors as you progress. Sliding your stylus in different directions to do the bonus stages is performed well and is a great change of pace after a frantic level.

As for replay value, there is plenty to do after you complete the main game as all levels including the bonus missions can be revisited at any time. There is also scores that can be beaten just like in the Wii version which adds a lot of room for completionists to go back and perfect acts to score the top grade. Add in the newly implemented single and multi-card versus mode and the heap of unlockables and this journey for the blue hedgehog is an easy one to take again and again.

Graphics/Audio
The graphics in Colors DS are some of the better on the system but it can be hard even noticing as the game blazes by rather quickly. Each level is different in it’s own right and the worlds are vividly detailed and come to life with the high usage of color and sprites. Sonic’s Sprite I felt was a bit plain in comparison but this is just a minor nitpick as everything else pops off the screen and makes level progression an engrossing experience. Even the rings are given a golden shine though and the visuals can easily put you back in the early 90’s with the glory days of Sonic. 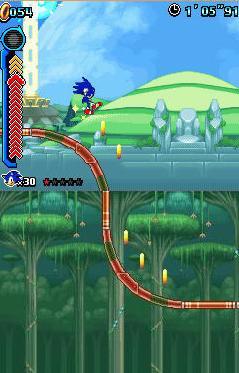 The music may not be at the same level as Sonic’s Wii counterpart, but it still does a great job of fitting with the game and the tunes feel at home with the 2D world. The voice actors do a decent job for what little voice acting that is in the game and set the tone well for the story. Cream still is a bit hard to bare though but she isn’t too prominent so that alone barely effects the game. A lot of the sound effects such as a charging spindash to the clink of rings being collecting at a lightning fast pace all come off with great results and never will you want to turn the volume down as the music and sound as a whole give a third dimension to this 2D title.

Overall
Sonic Colors for the DS proves that you can have a successful counterpart on a portable which lives up fully to the console version. In many ways the Nintendo DS version does it better as well. Where the Wii version had obvious flaws that were easily made up by the fantastic moments of the game, this version isn’t bogged down by any of that and easily outshines it gameplay and level-design wise. While the game is a brand new fresh experience, it still feels a lot like the classic Sonic games and in my opinion the DS version of Sonic Colors is THE current gen Sonic game to own as it is just more polished and feels more like it was a bit more of a gift to the 2D Sonic fanatics out there who have been craving a new experience. If you are a Sonic fan or just someone who wants one of the best platformers this year for the Nintendo DS, look no further as this blue hedgehog’s blazing colorful
return is an experience not to be missed on the portable scene.

I Give Sonic Colors for the Nintendo DS: