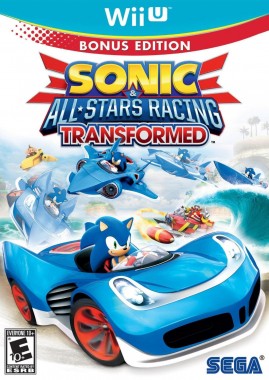 Overview
Just two years ago, Sega released a surprisingly solid kart racer by the name of Sonic & Sega All-Stars Racing. While not revolutionary, the sheer speed of the game and fan service sprinkled in made for a fantastic spin-off for the blue wonder and friends, leaving many hungry for more. Fast forward to the present, and we have a new sequel by the name of Sonic & All-Stars Racing Transformed. These famed racers can now “transform” their own vehicles in order to take to the skies and water. Adding to the package comes some minor fixes and even more fan service that Sega’s fans are sure to gobble up. Does Sonic & All-Stars Racing Transformed prove it’s worth, or is it one racer that is left in the dust by Nintendo’s mustached plumber. Grab your Gamepads and slam on your brakes, as here is our review for the Wii U version.

Gameplay
If it isn’t broke…well, you know the rest. For the most part, Sega have changed little for All-Stars Racing in comparison to it’s predecessor’s polished gameplay. Of course that is a good thing, as this sequel really only builds upon what worked. The standard cars race about like you would expect, and just require the player to hold down on the gas pedal with the right trigger, while steering their racer with the analog stick. Vehicles are handled based on the stats of the selected driver, with the larger racers suffering a little bit in speed – but making up for the stat loss with better durability and overall handling. Of course this means the smaller lot have greater speed and can take sharp turns with ease, but crumble faster when slamming into obstacles that little the course. 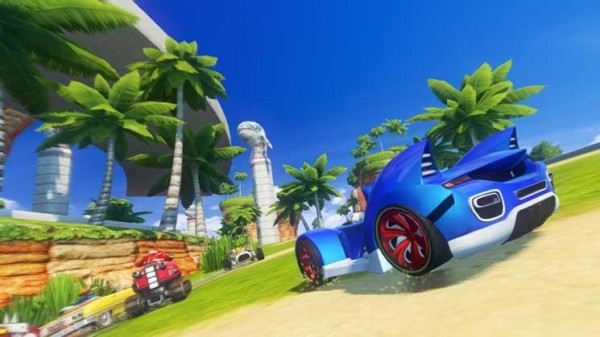 Yeah, most of you already know how Sonic & All-Stars Racing Transformed handles – as at it’s core, it’s still the fluid kart racer we seen released last year. What makes this title unique however is the alternate mods for vehicles that give them the ability to race in water and propel into the air. Many tracks have three different portions. You have your standard racing on land, but when a water or aerial portion appears – the player will then watch their vehicle transform into a fully functional racing boat or plane. We have seen this gimmick used before in other titles, but none do it better than Transformed as the entire track comes into play to make it feel as if you are in the water or on land with the physics of the terrain at hand. Yes, this is how it should have been done to start with, but too many racing titles that apply these mechanics do little to push the envelope and make any of the racing methods feel different from one other. All-Stars Racing features moving water and blowing winds however that force the player to adapt, making the race more exciting and keeping the action fresh until that finish lane is crossed. 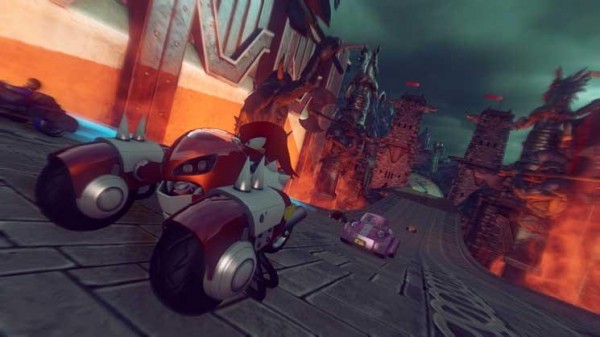 Power-ups are much improved this time around as well. Once a capsule is collected, the player can fire a projectile, launch a boost, or go into their unique All Star move, which offers a boost with invincibility perks – while allowing the player to attack any opponents by tapping the X Button at the same time. As an example, Ulala uses her blaster and groovy dance moves to gain an edge, while Sonic relies on his Super Sonic speed to get himself into first and can launch at other racers to knock them for a loop. With all of the racers in the game (29 in total), one will have a blast simply executing each. In the previous Sonic racing, the All-Stars move and power-ups in general felt a bit unbalanced, as the standard power-ups were rather weak and did little to effect opponents and while the All-Stars moves were great, the player rarely seen them unless they were lagging behind. That has changed in Transformed though, as you can use your own projectiles to destroy an obstacle or block an incoming enemy attack, and those special maneuvers will show up for all racers this time around, letting everyone experience the awesomeness at least once during a race (if those capsules are collected, that is). 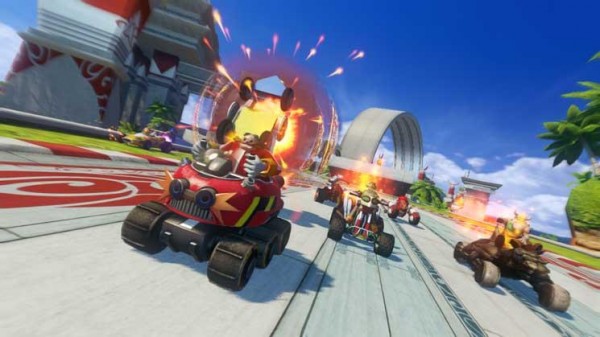 As far as modes go, the Career Mode has a lot to offer and acts as the main centerpiece for the experience. World Tour has the player participate in different events throughout the 20 unique in game tracks, where the player progresses after they complete a certain objective. While some of these events are just standard racing fare, others mix things up – delivering activities such as timed boost, drifting, and traffic maneuvering challenges. Yes, they all are great in their own right, and do wonders to keep the player invested while they gain stars to unlock more tracks and racers. Grand Prix mode is also back in full swing, as well as the single race and time attack. Yeah, these modes play the same as the previous entry, but are still worthy of your attention once you have unlocked everything. During any bout, the player will be rewarded for their performance with XP, which is then used to level up their racer – and get a better performing vehicle in return. All of these options come together as one, well oiled machine and due to the races being so enjoyable, it will be hard for anyone to tear themselves away from the controller due to the large variety of options Sega have littered this title with.

Multiplayer can be played locally or online. For the online races, one or more (yes, you can bring a friend online) can participate in Lucky Dip, Arena Mode, and your general race to the finish. Local play has these options as well as Party Play, which utilizes the Gamepad so that up to 5 can participate at once. Speaking of the Gamepad, Sumo Digital have incorporated Nintendo’s new controller wonderfully. While racing, the player can lift up the device to get a rear view mirror shot of the oncoming contenders. When the Gamepad is in standard use, a map is displayed – showing each opponent’s place and power-up. All of this may sound hectic when watching the television at the same time, but thankfully – everything feels incredibly natural and polished. 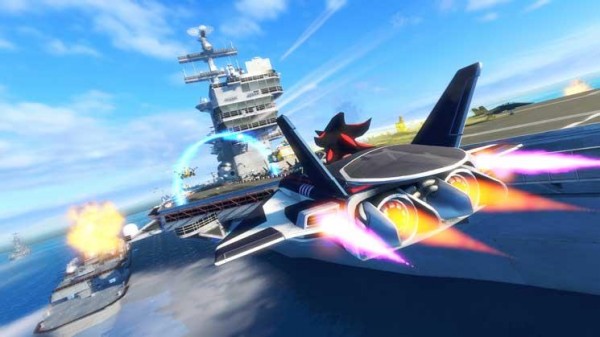 I can barely put into words of what the best feature is within Sonic & All Stars Racing Transformed truly is. What, you may ask? Pure Sega. No other game in the history of the publisher’s illustrious history has shown more tribute to their famed mascots than this superb racer. Sure, the obvious characters are in, such as Sonic, Tails, Shadow, Knuckles, and Amy, but Sumo went the extra mile this time around and included lesser known franchise leads – with the likes of Gilius Thunderhead, Vyse, Joe Musashi, and even one special unlockable that you Dreamcast fans will have to see to believe. It’s not just the racers though. Stickers from all of these major franchises act like beautiful achievements for accomplishing objectives, and the large variety of worlds torn from Panzer Dragoon, Skies of Arcadia, and Jet Set Radio Future are sure to comfort that nostalgia gland for anyone looking to see some stunning recreations of past visited localed. Hell, Ristar is even the flagman. Yes, this title is dripping with fan service, and with the already solid gameplay, it would be a shame for any retro lover to pass up the massive tribute offered.

Visuals and Audio
Like most launch titles on the Wii U, this game pushes the power of the platform with bright, vibrant colors in HD. Yes, it looks every bit as good as the Xbox 360 and Playstation 3 versions, and the Gamepad’s picture is just as pristine for those who prefer to play with the detached feature. Every character, whether it be someone who we have seen time and time again like Sonic, or the rarer seen heroes such as Joe Musashi have been recreated for this game with a fully featured transforming ride, capturing their own franchise’s legacy perfectly. Seeing the vehicles transform is also pleasant, as the transition is smooth and fluid, not disturbing the race happenings whatsoever. The best thing to see visually however comes in the massive tracks, which have been built from the ground up to capture their original title’s spirit. 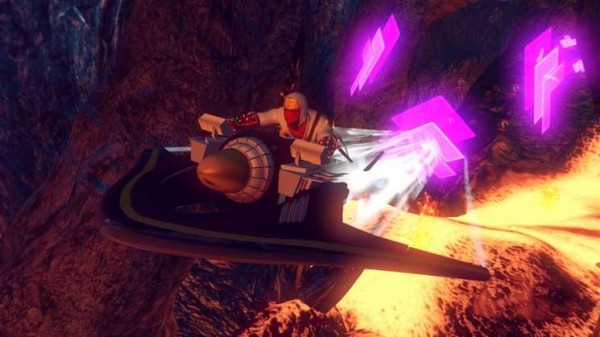 Soundtrack wise, this one is for you, Sega fans. Sky Sanctuary’s tunes will fill your head with notalgia, while tracks like the theme Grafitti City from Jet Set Radio are sure to make that locale worth visiting all over again. Making things better is the All-Stars move, which feature a small track inspired by the character you are playing as. Remember the Knuckles Rap? Amy’s Song? Well, all of those and more have made the cut, offering even more reward for triggering the special ability of each playable mascot.

Overall
Mario Kart is always the series that all other racing franchises have to look up to, as it set the standard for what this type of game should be. Sumo have done the once impossible with Sonic & All Stars Racing Transformed however, and have beaten that formula with more exciting gameplay, beautiful worlds, and enough fan service to make a Sega fan explode. With all of the extra content, fans will stay busy for hours on end as they level up their racers and relive their childhoods. This once spin-off series does nearly everything right and never lets off the gas, propelling Sonic & All Stars Racing Transformed as the best kart racer of this generation. Sorry Mario, a serious contender has just pulled up to the starting line.