Overview
Mobile gaming and science fiction gamers rejoice!  The people over at Bulkypix Studios have created a wonderful game called, Soldiers vs. Aliens, in which you must travel to nine different worlds and fight your way through hordes of alien creatures and rescue stranded survivors while you are at it. They also include a very immersive upgrade and customization system for you to spend your in-game currency on.

Story
The game has quite a gigantic story. The game begins with your first mission which is pacifying the aliens from the N.A.C.O. science center. After you complete this mission, you understand why your soldier keeps his helmet on but, that will be a surprise for when you pick up the game. 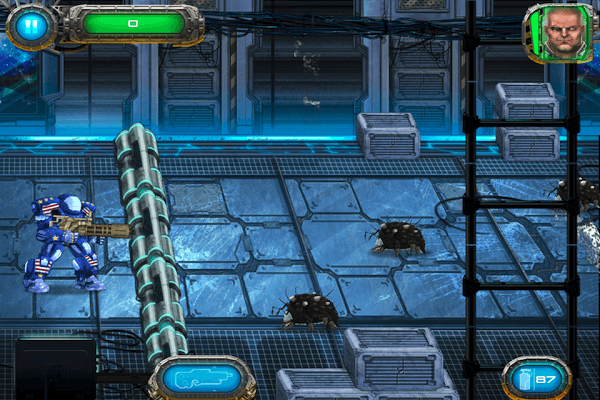 The game continues on as you get a distress call from a high security transport and you must rescue some survivors. Yes, some of you may be thinking to yourselves, why gee that sounds like it leads to a good story. Well, it does up until you get to a certain point in the game and the missions begin to repeat themselves with you going and pacifying areas in the universe or saving civilians again. This sort of repetition begins to get old pretty quickly.

Gameplay
The gameplay is pretty simple, you move sliding your finger on to the soldier and moving him like that and you then shoot by tapping or holding another finger on the alien you are trying to kill. The gameplay is a little difficult to use at first if your are like me and have ginormous hands but, it does tend to get easier to use over time. 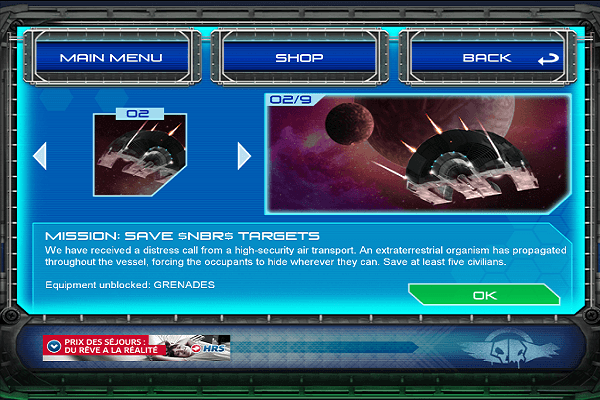 Aside from the campaign mode which was mentioned above, the game includes a survival mode. The survival mode is just like any other type of survival mode you would play but, the enemies get a whole lot more difficult as you progress right up until the point to where you know you have no chance of surviving.

The game has many weapons for you to choose from, each having its own unique firing method so it gives you the feeling that they are all unique in their own way. One of the great things about the weapons system of the game is that you don’t just go into battle with only one weapon, you are able to choose from the list of weapons you have purchased while you are mowing down the aliens with your trigger happy finger. They were also kind enough to include some equipment to use in the game like turrets or grenades but, they have minor affects on some of the more tougher enemies you shall be facing. 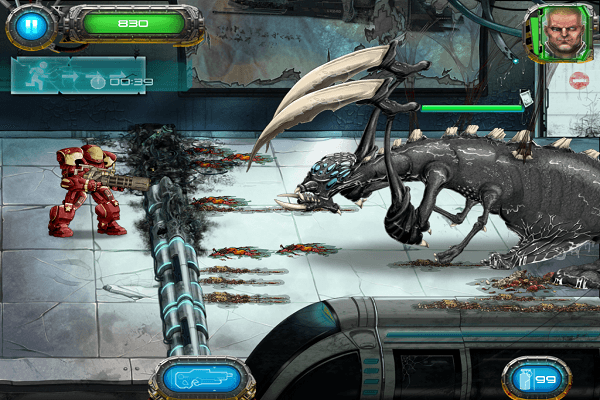 The game includes an armor customization also in which you can choose from different types of armor. The only problem with it is that all the armor upgrades upgrade you to the same amount so there is truly no reason to buy more than one armor set.

Visuals
The games visuals are quite nice. Yes, they might not be the best visuals that are out there but they do fit the game. With the detailed varieties of aliens and the armor your solider is equipped with, you can be assured that they are truly one of a kind. The visuals do not lag at all but, I did seem to have some technical glitches at a few points but as I played on they seemed to go away.

Audio
The game has the epic war music you would expect from any game like it. The audio tracks make you feel like you are a soldier about to go to war and face a threat you have never faced before. 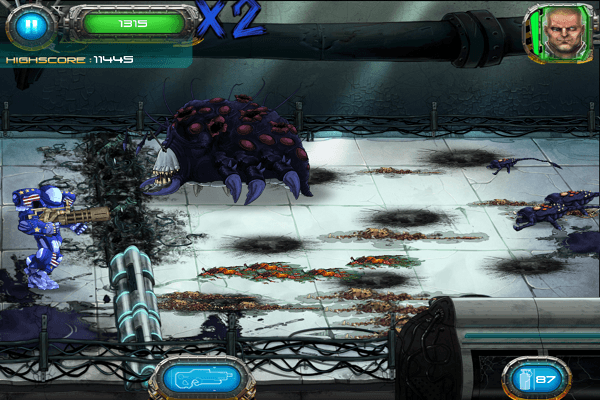 The games sound effects are pretty good also. Each guns has their own sound affects and the aliens make a neat little screech when you kill them and splatter their guts all across the floor.

Overall
Soldiers vs Aliens is a pretty good game. With it’s gameplay, audio, the whole nine yards! While the game has some issues, they don’t really seem to harm the game. The game has a so-so story that could do better and some glitchy visuals every now and then but, you can’t say anything bad about the game, the reason being? It’s free. If I were them, I would have given this game an actual price but, you got to love when a good studio like Bulkypix is generous enough to give you it for free. Now get off your butt and stop eating those donuts soldier and prepare to pick up this game!