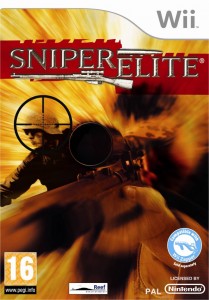 This game is essentially a port from 2005, lacking advancements from it’s counterpart, so it felt like I was going back in time. So it was only fitting that the game goes back in time itself and is set in 1945. The Second World War is drawing to a close and the Russians and Germans fight for Berlin. Zing-ha! The Cold War has begun, and you assume the role of an elite U.S. sniper was sent by the OSS in this region struggle. Their mission is: “Prevent the fall Stalin V2 technology and the information about the atomic bomb research from falling into the wrong hands”

It’s not the greatest story by any means, but it’s not supposed to be and that’s fine with me. The bundle from Bluemouth Interactive is a white sniper rifle, but the Wii Zapper gun is also compatible with the title. The rifle is assembled with the instructions in no time and looks great too. In this gun, the Wii Remote (also available with Wii MotionPlus accessory) and the Nunchuck controller fits nicely and you’re ready for the occasion. The peripheral is a nice addition to the setting of the game, if the developers had this idea when the Wii launched, I think alot of hype would have come with it. But it’s been quite awhile now, so they’re abit late to the party.

Although the controls are well explained and detailed during the first mission, as you start combat, it can be confusing. To top it all off you have to always press A instead of B, because the finger is constantly on the trigger anyway. Why not have the confirmation button as B? Instead you’re always pressing A, which is found at the front end of the rifle and it’s strange. Also zoom works by using the A button, a long press of the telescopic sight would have been a healthy alternative; the strange setup takes awhile to get used to. 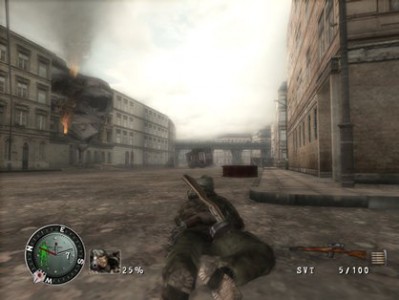 Now we come to the gameplay. Basically, you can expect a third-person shooter in which you assume, as already mentioned, the role of a sniper. You can expect a typical urban sniper battle, which isn’t exactly the norm on consoles, so it’s a good thing. You hold the rifle at the ready constantly and the game is sort of stop and start, as you can imagine, trying to build tension. You are moving from one cover to another, switching back into the scope mode and investigating the situation. But you can also use a pair of binoculars, however the sniper rifle makes it much more fun because you can pull the trigger if you see an enemy. There are 28 missions, each proceeded by a very good mission briefing to fulfill the main and secondary objectives. These are displayed on a compass on screen, while an orientation is provided on the battlefield. This actually works quite well and is fun. As might be expected, however, you must proceed very cautiously, because the goals require much time. Running in like rambo only worked on a few occasions, it can be quite an unforgiving game. It’s also interesting how much depth there is to the game, it’s not something I expected. You can, for example, control the way you breathe and it’s actually really important to think about if you want to progress. Even though it is unforgiving sometimes, you can save anytime, anywhere. This point is very important because you can die really quickly, especially if you aren’t looking around the corner. 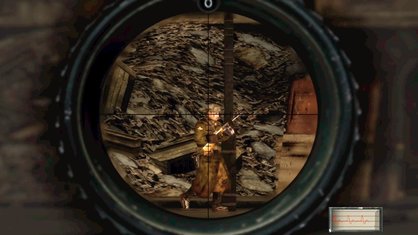 Now to some negative points, Sniper Elite on Wii is a very good sniper simulation, plagued only by some lousy porting. I happen to also own an original PS2 version and I was very disappointed that the Wii version was actually a step backwards in some ways. The biggest issue are the controls, which are great for sniping, but not really anything else. The wii motion controls feel very gimmicky and clunky at times. Although aiming is easier with the WiiMote, moving your character, especially in tight spaces, is quite difficult. Most of the gesture controls are average at best. You’ll know what I mean if you try planting any bombs, frustration can quickly set in. Having an option to use a classic controller would have been helpful, in my opinion.

All in all, the gameplay stacks up against the older versions well, mostly when it comes to the sniping though. It works well to a certain degree, but simply moving around can be a pain in tight situations. Realistic ballistics are the best feature of the game, involving factors such as bullet drop, wind strength and breathing. The games staple is bullet time when you pull off an awesome shot, which has 2005 written all over it (Matrix anyone?) and it’s obvious the game was a victim of it’s time. In the year 2011, six years later, the same theory applies as a typical Wii port.

Graphically, I’m not really convinced. It gives an authentic war setting, houses with bombs and grenade impacts, craters and collapsed. Also the animations, for example, when a grenade strikes may be excellent in some cases. Briefly, the screen will shake from the shock of your character. The bullet-time feature is okay, it may have been awesome for it’s time, but now it’s nothing special. The game is technically sound, there is not too much to complain about. The mission briefings are in particular, the most impressive. 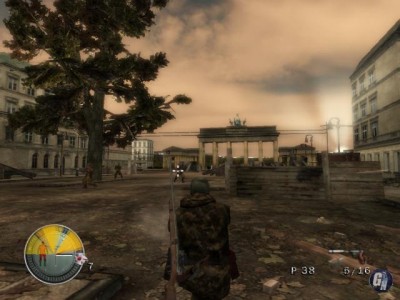 In saying that, this is no technical upgrade for the Wii, which is pretty disappointing. It’s pretty clear that the game couldn’t be optimized for Wii’s limited hardware, unfortunately alot of games coming from the PS2 to the Wii have suffered the same fate. Whether it’s some standard technical issue between the two systems or laziness by developers is unknown, but it’s happened alot this generation, more than likely for money. Serious graphical inconsistencies like disappearing textures and geometry are way too common in this version. This is pretty bad considering that this game ran just fine on the PS2, but the art direction does make up for the graphical failures.

Sniper Elite requires patience, skill, cunning and an appreciation for the sight of a bullet moving towards a man’s head in slow-motion. It’s tougher than the rest and, often a great deal more satisfying in the solo campaign. The game does suffer from lazy porting in some cases and don’t be fooled by the mention of “extra content and features” in this version. The extra content boils down to a single mission, which was abit surprising. Also the Wii version only allows two save slots per profile, so you need to ration what you’re saving when the game becomes punishing. I enjoyed Sniper Elite for the most part, but it’s a standard port with the best feature being the controls for sniping, if it was ported with alot more care it would have been an A grade title. For example there’s no multiplayer in the Wii version… strange. This was a multiplayer shooter with the multiplayer part completely removed – what a curious development choice. Nevertheless if you didn’t play the game back in 2005 and feel like some enjoyable tactical shooter action (which has been rare this generation), this last generation game has some appeal with updated Wii controls.