In an age of birds breaking things in zero gravity and blades that grant the bearer immortal life, it seems odd to use the humble snail as a protagonist in a game for iOS devices. The slimey bug somehow manages to translate well to the cartoon style we’ve all come to expect from these games, and comes off as cute, rather than something you feel should be going squish. But can Snail Bob provide the thoughtful thrills of a decent puzzle game, or is he just too slow to ever take off? 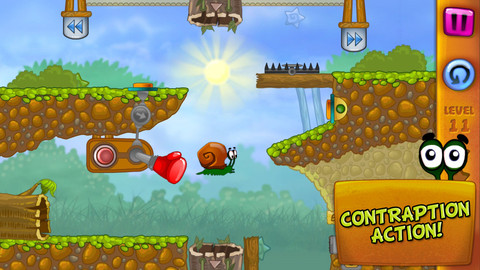 So Bob’s a snail, and he moves like one through the game’s various levels. His slow, ponderous pace actually matching quite well with what could be called one of the quickest physics-based puzzled games out there.

It’s not that your reaction times will be particularly tested, but the way obstacles are arranged around the game world lends itself to a very active method of problem solving. Bob moves forward in one direction by default, though you can stop him by giving him a quick tap on your iDevice screen. This will make him retreat into his shell, protecting him from foes like voracious, swooping eagles.

As Bob moves through levels, you’ll have to slide bridges open, pull levers, turn turnstiles that let him change direction, pop balloons carrying Bob across a crevice  and the list could go on. The game does a great job of keeping new elements flowing in, which means you’ll never really have a chance to think about getting bored. In a sense, Snail Bob is the opposite of formulaic. 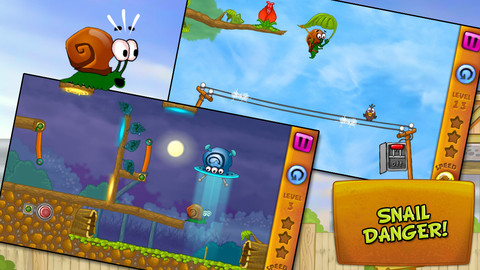 On top of that, death is something you’ll learn from rather than being the aggravating, send you back ten minutes insta-kill that has become the staple of some puzzle games as this generation has wound on. That’s not to say the deaths aren’t entertaining. Bob’s eyes widened dramatically as I failed to stop him being crushed by a log, until they were the only thing left I could even see of him. It’s like he was silently crying out, “Why me?”

Of course this wouldn’t be an iOS game if it didn’t include a three-star system for each level. Yet Snail Bob manages to implement the system creatively, with the stars being hidden in each level – a quick tap is all takes to collect them. That sounds easy, but some are really well camouflaged within the level’s assets and when there are so many moving parts in Snail Bob’s environment, it’s also clever of the developers to hide the stars on or behind those things, giving you just a quick window to see and collect them. 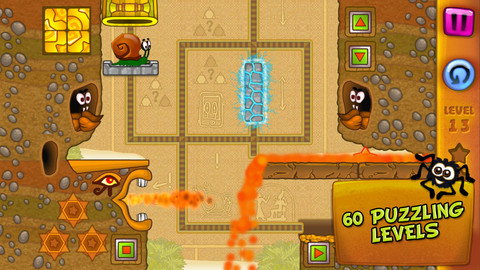 Snail Bob is a game that changes up the pace you expect from a portable puzzle game, and busts the stereotype of the slowness of the humble escargot. It’s not an all out dash, but there will be moments when you are frantically sliding, tapping, and analysing to get Bob safely through a level. Finding stars is, at first, an easy proposition, but when your mind is so focussed on getting Bob the hell out of trouble, you’ll soon find yourself missing one, two, or even all three of the stars as you try and survive a level. It’s pure fun, and it just doesn’t get boring.

Yes, it’s a cartoon, and no, it’s not the best looking one out there.

Snail Bob’s visuals do hold up, however. The game looks standard without coming off as cheap or as if the developers did the bare minimum graphically. Rather, the visuals do a good job of presenting the adventures of Bob as you guide him through various levels, and it truly shines at the protagonists portrayal. His truly comical deaths and general lack of slime make him one of the cuter heroes to grace the iOS platform, and his personality is perhaps his lack of personality. He’s just trying to make it through his horrible day of booby traps and hungry birds. 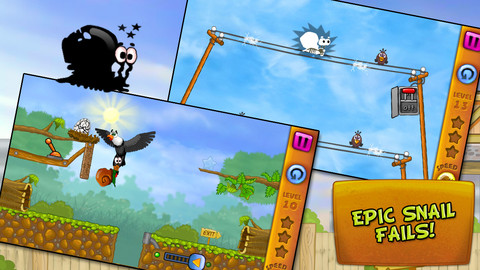 Oddly, there was no silly tune on the main menu or in the background of the game. Which meant no annoying song stuck in my head, but still, I noticed its absence. In fact one could say the sound work is a bit minimalistic. There are pops, cranking noises, and the like when you traverse an environment, but it’s all a bit sterile. For me, the sound design was probably the game’s biggest weakness (which says a lot about the actual gameplay).

Snail Bob is a game that, ironically, revels in its pace. While none of the platforming ideas are particularly new or unique, the speed and guile you’ll need to accomplish them is a breath of fresh air in a game market that often caters to the lowest common denominator (that is, 5 year olds who need several minutes of non-movement to figure things out). The game also keeps new gimmicks and challenges coming at an impressive rate, meaning you’ll have trouble getting bored, or even putting the game down.

Snail Bob costs 99 cents, and it’s worth every penny.