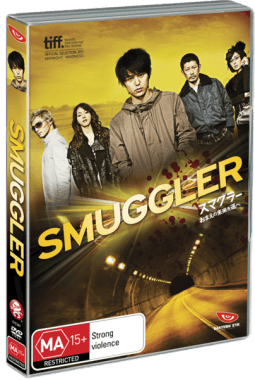 Smuggler is a film adaptation of a manga series by Shohei Manabe. The film walks the line between dark comedy and action/drama, with some interesting characters and a memorable villain that you will soon not forget (and will likely want to see more of). Smuggler is directed and written by the eccentric Katsuhito Ishii and stars Japanese Icon Masanobu Ando, star of Kinji Fukasaku’s cult-hit Battle Royale and legend, Takashi Miike’s Sukiyaki Western Django. The film has some impressive names behind it, but is the source material too obscure for the West? Are those unfamiliar with the manga going to be able to appreciate the film? Will those who are? Find out as I smuggle my review onto your screens! (Yes, that’s how the internet works!)

Smuggler is broken up into 5 unbalanced chapters. The first is entitled “Chapter Zero: The Night It All Began, Rain” and it shows our lead protagonist Kinuta, a failed actor, having a flashback to the day he found himself in debt to some mobster casino owners after he “blew their operation’, attempting to walk away with 3 Million Yen from their rigged poker machine. After getting lambasted and abused for it, even though they allowed him to use the machine in the first place, the mobsters take Kinuta in to see ‘The Banker’ at Yamaoka Loans, whom gives Kinuta a job opportunity – to become a smuggler for the Yakuza. 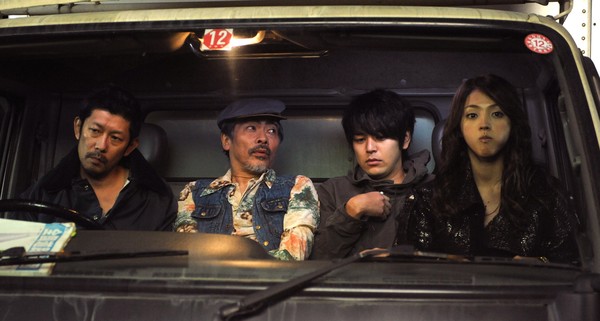 “Chapter 1: The Movers” starts off by treating us to a Yakuza drug deal gone wrong. The boss, Tanuma, is a very unstable and quirky character, with his people requiring no one smokes before his arrival, or in his presence. After he shows up, he begins to smoke himself, and when the other party inquire about it, he flips his lid, exclaiming “Nothing’s more harmful than second-hand smoke!” before having a seizure-like breakdown. His men force him to swallow his medication and he’s right as rain again, giving everyone a lecture on the many deadly carcinogens in cigarette smoke. It’s a very funny scene, that soon turns very violent when super-assassins Vertebrae and Viscera, sent by the Chinese Triads, crash the proceedings.

The unfolding brutality is visualised in well-utilised slow-motion. Vertebrae, with his signature spinal tattoo, obliterates everyone’s faces with his stone nunchucks. Viscera then decapitates Tanuma. Vertebrae in particular comes across as a total bad-ass, and the action was well choreographed and shot. After the two killers clean and dry their clothes, they leave the scene of the crime with Tanuma’s head. The Banker comes in later on with cleaners, who don’t seem shocked by the blood spatter at all, casually commenting on the amount, saying “Blood spatter’s pretty bad” – “For this number of bodies, not really”. 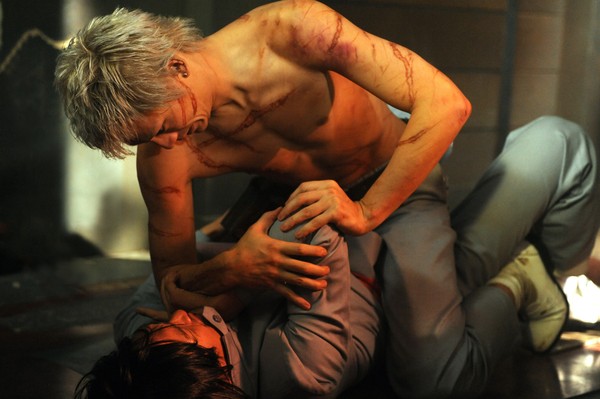 Eventually we discover that Kinuta, an “old man” (as he is referred to) and his superior, Joe, are tasked with the transport and disposal of Tanuma’s body. More of the Yakuza are introduced to us as they are delivered Tanuma’s head. One in particular, Kawashima, is bat-sh** crazy. He is accompanied by two colleagues and is absolutely the most entertaining character in the film. He has some of the darkest, yet funniest scenes there is. There’s a scene later in the film when he asks for Takahashi’s (one of his colleagues) tie, so that he could wrap a stone in it and swing it at a man’s testicles as torture. As he is doing the wrapping, he says “Is this…another present from your ugly bitch?” – “Yes it is…but she ain’t ugly”. And then as he swings – “Oh, yes she is!!”.

That scene marks the beginning of “Chapter 3: In the Back of the Truck”, which I won’t write about because from this point onwards there are some details that will spoil the whole story. The same can also be said for the previous chapter , “Chapter 2: Vertebrae and Viscera” which takes a closer look at their relationship and dynamic, and also (obviously) “The Final Chapter: Resolve”. As the film carries on through to it’ conclusion, after 114 minutes, it does go back and forth between comedy, drama and straight-up torture porn. There are even slightly supernatural elements related to Vertebrae exclusively, which come out of no where. Apparently a bullet to the head can’t kill him either. 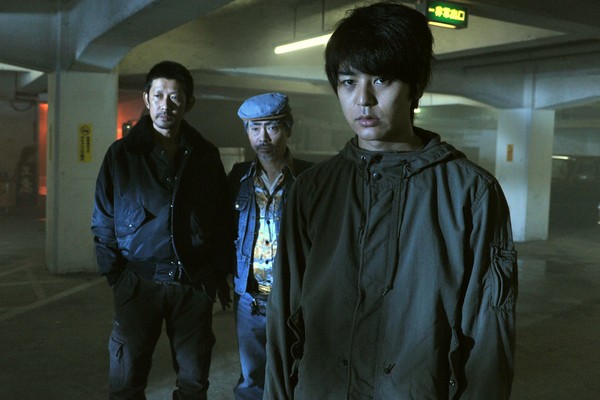 The film’s plot never feels balanced with a broken focus that neglects all opportunities to really explore Kinuta’s gambling problems, his past and any meaningful character development. There are some great moments and highlights though, such as all the action, the quirky humour (when it works), the insane Kawashima and the enthralling Vertebrae. The film stands on the verge of becoming a completely fantastical tale, and then dips back into a more grounded reality. This identity crisis plagues the film, and prevents the viewer from becoming entirely engrossed in the story as they keep getting pulled back out of it.

The transfer is presented in 16: 9 Anamorphic Widescreen and looks pretty good. I’ve grown accustomed to the higher video quality and fidelity of Blu-Ray HD transfers, but in reviewing many DVDs lately, I have to say that they aren’t as lacklustre as I would have expected (it is a downgrade, let’s face it). No visual artefacts, clear as it can be. In regards to the cinematography of the film, Smuggler reflects a decisively more grounded reality than it’s story may portray. And it works, until the aforementioned supernatural elements to Vertebrae. No spoilers here, but you’ll notice it when you watch the film. It sticks out like a broken thumb…or wrist. Watch the film, you’ll get it. 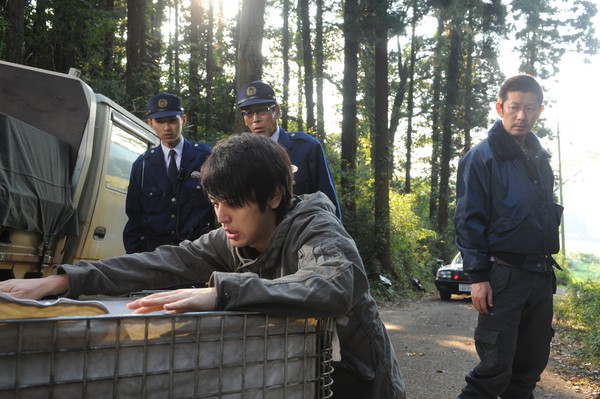 The audio is crisp and is relayed in Japanese only Dolby Digital 5.1 or 2.0. There are only English subtitles. I found a weird anomaly in the subtitling for the chapter markings during the film. Well, not so much an anomaly, but bad editing. For Chapters 1 and 3, the subtitle would literally appear for 0.25 of a second. Blink and you’ll miss it. Of course it’s not really an important piece of information for the viewer; breaking the film up in chapters is really just an unnecessary story device that doesn’t change anything.

Smuggler has over 33 minutes worth of extras. We have the obligatory Theatrical Trailer as well as a quartet of trailers for films under Madman’s ‘Eastern Eye’ division – the best of which is The Raid, which I wholly recommend. Then there’s a very brief look at Katsuhito Ishii attending the 2011 Toronto International Film Festival (TIFF), where Smuggler was officially selected for the Midnight Madness showcase. What’s left are the meat and potatoes of the special features: Cast Interviews and the Making Of. 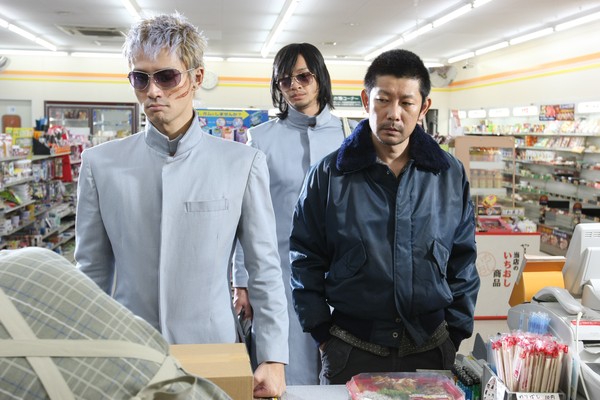 The Cast Interviews feature Satoshi Tsumabuki (Kinuta), Yasuko Matsuyuki (Yuki Yamaoka aka ‘The Banker’) and Masanobu Ando (Vertebrae) answering questions about the filming experience, their interpretation of their individual characters and what it was like to work with the cast and crew amongst other things. Each interview lasts around 5 minutes. The Making-Of video has a runtime of about 17 minutes, and is nice view of the film-making process, with a fair amount of time allocated to a behind-the-scenes look at 6 major scenes in the film.

Uneven is the best word that can be used to describe Smuggler. From it’s character development, to the tone and pacing, the film never quite hits its stride. It has some fantastic moments, but they don’t add up to make a great overall film. Masanobu Ando is the stand-out as Vertebrae, and as much as he reminded me of Ichi from Ichi The Killer, I would love to see more of him in the future, maybe in a spin-off title. The likelihood of that happening is slim, but we can dream.

The DVD quality itself is good, and although the extras are not exactly comprehensive, they do provide snippets of insight with the Cast Interviews and, retrospectively pretty decent, but somewhat slim Making-Of feature. In saying that, the Making-Of in particular really did supplement the film well enough and is the reason I bumped my score up half a point. I was not privy to the source material, but, if you are, or are just a fan of quirky, violent, sadistically funny Japanese flicks, then you may have a special interest in this film. When all is said and done, it actually left me with some memorable scenes that made an impression, and I appreciated its style. Maybe you will too.