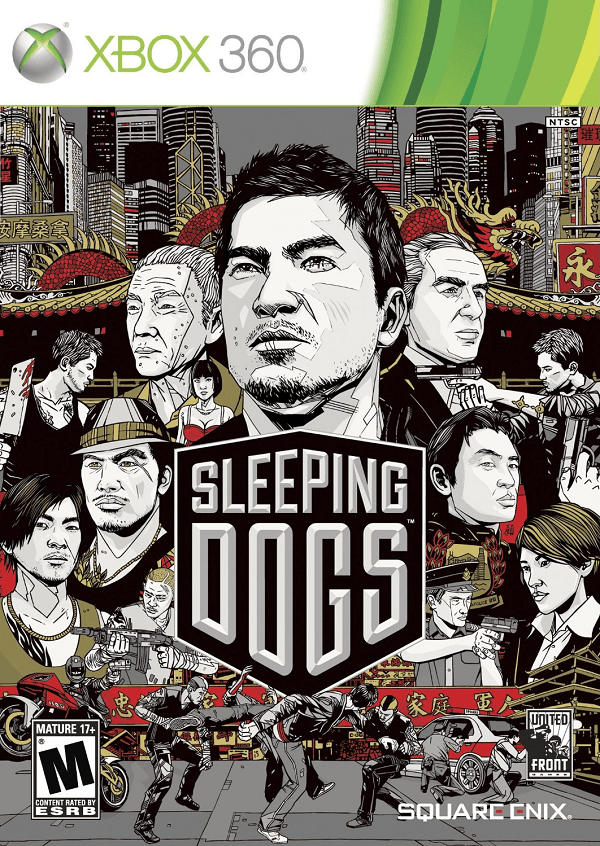 Overview:
In the entertainment industry, whenever a license is abandoned or dropped by the license holder, it usually means that the public will never hear about that product ever again. However occasionally a license rescue does occur and save not only the product being created and the creators’ jobs, but also provides the public with something they’ve been anticipating.

Originally an Activision product under the name True Crime: Hong Kong, the company decided to stop working on the title and canceled production. However in an effort to save the title, Square Enix acquired the license to the mostly developed title and re-branded it as Sleeping Dogs. With a new name and publisher, Sleeping Dogs’ has now arrived on store shelves. Was it worth the effort Square Enix went through to rescue?

Story:
Players step into the shoes of a gangster called Wei Shen who looks like he is about to enter into a deal with some very nefarious folks. Unfortunately for everyone involved, the police show up and break up the entire affair. The twist here is the fact that Wei Shen is actually an undercover cop who has been tasked with infiltrating one of the worst Triad gangs in all of Hong Kong, the Sun On Yee. 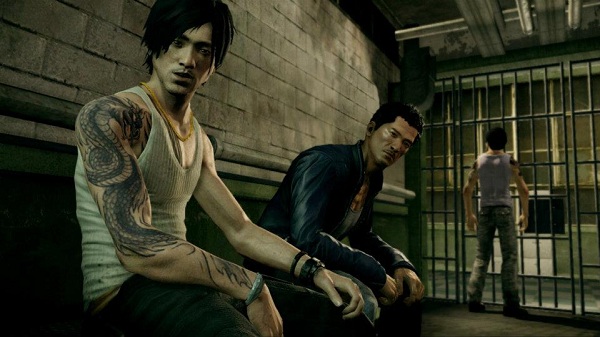 With his initial crime already providing him with an old friend to introduce him to one of the Sun On Yee’s Red Poles (lieutenants), Wei must try to do his best to keep his cover secured while earning the trust of everyone around them. Unfortunately, emotions begin to run high thanks to Wei’s history with the Sun on Yee and he soon becomes embroiled in a gang war unlike anything the Triads have seen before. With only three people knowing his true identity, can Wei keep cool under the building pressure all around him?

Venturing too much further into the story would quickly enter story-ruining spoilers and that is actually quite a plus with Sleeping Dogs’ storyline. As players follow Wei through his various missions for the Sun On Yee there are quite literally plot twists and betrayals happening quite often, making it difficult to predict most major plot points. Add in the fact that Wei slowly begins to lose sight of the line he must not cross as a cop, in an effort to make it all the way to the top. 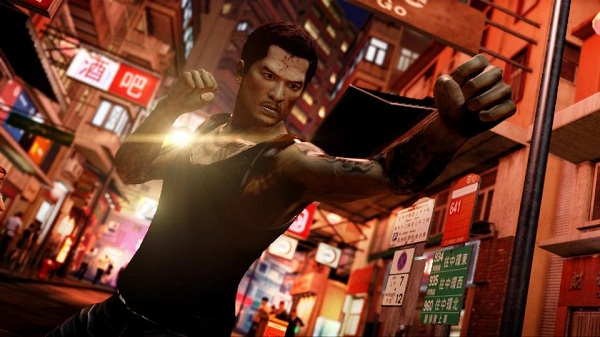 It is worth noting that there are still a number of predictable events that will occur within Sleeping Dogs’ story, especially for those who have watched any number of gangster movies. Despite this however, players will quickly become enamored with the double-life that Wei must live as he works to solve cases for the police while also becoming one of the most vicious members of the Sun On Yee and eager to see where the, slightly short, story will end up.

Visuals:
While Western cities may all have their same standard set-ups outside of a few geographical landmarks, the work that has went into creating a splendidly designed Hong Kong is simply stunning. Practically every inch of the world has been designed with Chinese flavor and architecture, providing a gameplay arena most games have never even attempted before. 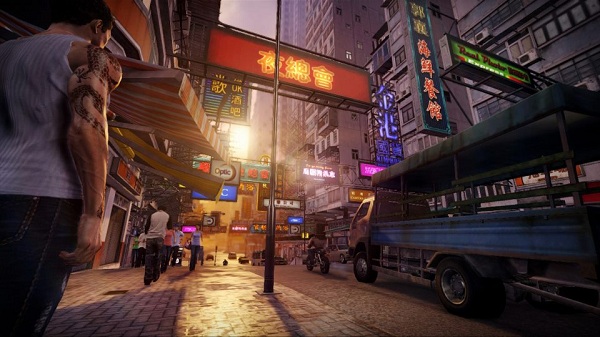 The character models within the title are also very impressive looking, with a large amount of detail and variation between each of them. Perhaps one of the biggest visual treats within Sleeping Dogs is when rain begins to fall, as the wet sheen that spreads over the world is certainly a sight to behold.

Audio:
With the massive amount of voice work in Sleeping Dogs it is great to see that Square Enix has enlisted some high quality voice actors to handle the voice work for many of the characters found within Sleeping Dogs. This can also be contributed to the fact that, considering the game’s setting of Hong Kong, nearly all of the voice actors have done an amazing job with their Chinese accents and various Chinese phrases mixed in with the English. 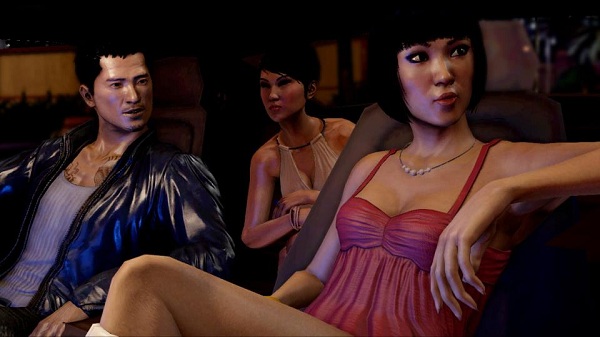 As for the game’s soundtrack it is adequate at best, with some decent music available on the radio while players drive through the streets of Hong Kong. Most of the game’s sound effects work well and provide a decent atmosphere for the game, though there is a small issue worth mentioning. At least twice throughout the game, the sound of machine gun fire became stuck and repeated incessantly for nearly a half hour of gameplay, even during cutscenes and was only fixed by restarting from checkpoint.

Gameplay:
Sleeping Dogs provides an open world sandbox for the player to explore while also offering plenty to do at the same time, most of which feature brutal hand to hand combat and “hard-boiled” shooting mechanics. Players will be spending a lot of time fighting within the game, either taking on various street thugs they find while roaming around the map or during the game’s many story missions.

The combat system is well thought out and handles quite well with a number of easy to understand mechanics. In fact the hand to hand combat seems to take a similar path as another title by providing obvious counter attack indicators, allowing the player to deal out heavy amounts of damage. To make things even more exciting, most of the game’s story missions involve various set-pieces where the player will be fighting, such as the back of a fish butchery or in a construction site. These areas provide some brutal opportunities for the player to interact with the environment by dragging an enemy over to an object and impaling them, slicing them up, burning them or simply shoving their face into a spinning fan blade. 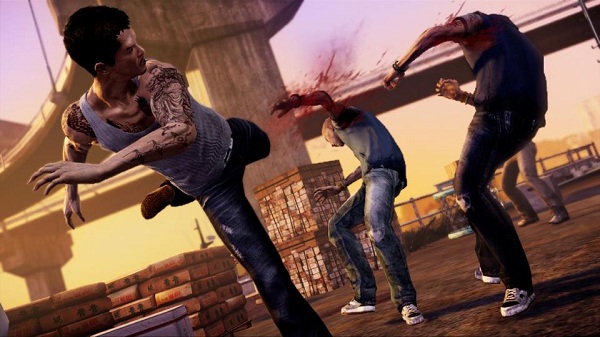 When roundhouse kicks and kicking people into a phone booth aren’t enough, guns have to come into play. Touting a “hard-boiled” shooting system, players will be able to temporarily slow time as they leap over cover, jump over balconies or slide over obstacles. The shooting works well enough, though it is worth noting that only a pistol can be kept for any length, while other firearms must be dropped in short order and even then the pistol is usually taken away during story missions.

Outside of the game’s impressive fighting and shooting, there is still plenty to do in the sandbox that is Sleeping Dogs. There are numerous collectibles hidden throughout Hong Kong in the form of jade statues, lockboxes, health shrines and more. To provide even more entertainment there are nightclubs to sing a limited number of songs, gambling on cockfights, illegal street races, stealing cars and more. There are even side-missions in the form of Favors which provide short missions with a simple goal to accomplish such as driving a car into the ocean or escaping from police.

As the player finishes various missions they will notice that they are actually being given both Triad experience as well as Cop experience points which help level up some of Wei’s abilities by giving him new attacks and other bonuses. It is worth noting that the cop experience points are actually full at the start of the mission and are taken away from doing things bad such as killing civilians and damaging property, often causing unwanted experience loss under simple circumstances. Triad experience points are given depending on how vicious the player is during said mission, with things such as headshots, counters and environmental kills giving large bonuses. 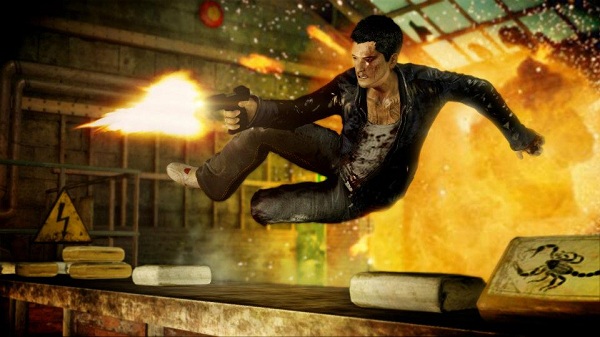 While Sleeping Dogs does not offer any online mode to speak of, there still are a few things players can do to compete against their friends. There are a number of stat tracking systems in place that keep track of various in-game things, such as how long you drove cleanly, kill-streaks, hit and run, hijacking vehicles and more. These can then be compared on leaderboards amongst your friends to see who is the sand box master of Sleeping Dogs. This provides a small little competitive edge to the title, though one that often seems to be down or displaying incorrect information.

It is worth noting that Sleeping Dogs does have a number of bugs and issues which can cause the player to have to restart from checkpoint. Over the course of the game’s main story mode I had to reload checkpoint no less than ten different times thanks to the game glitching in some way and causing Wei to either become immobilized or unable to climb over obstacles. This even happened during free roam as well, which required a reload of a previous save.

Overall:
Sleeping Dogs is a title that may have had a rough time getting out to the public, but the finished product sure looks like something that should never have even been given a doubt. It not only provides an enjoyable and stunning looking open-world environment for players to explore but also one that most gamers have never even seen before. With only a few glitches here and there, Sleeping Dogs’ mildly long storyline, plenty of side-jobs to keep the player interested afterwards and just flat out enjoyable combat mechanics make it an enjoyable title worth a look.