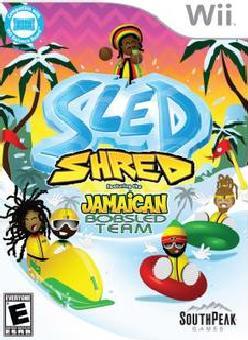 The Jamaican Bobsled Team is looking for a special individual that has what it takes to join the slopes and take the world by storm. In this unique title, Sled Shred featuring the Jamaican Bobsled Team is a racing game at heart with a surprising amount of content at a budget game price. So how is the game and how does it play out when it comes to sled racing? Here is my review.

Story
The main story mode starts with three kids sledding down a hill and into the path of Coach Mon. Coach Mon is looking for someone with serious skills to participate in the Winter World Games with the Jamaican Bobsled Team.

The story is quirky, a bit stereotypical, but honestly fun for the most part. In the few cutscenes that come between races, Coach Mon will drill you on what to expect for the next set of events and your off. Not too much to it, but the characters all have some charm with their personalities and while a bit cheesey, they keep the game interesting and add some life to Sled Shred throughout the experience. 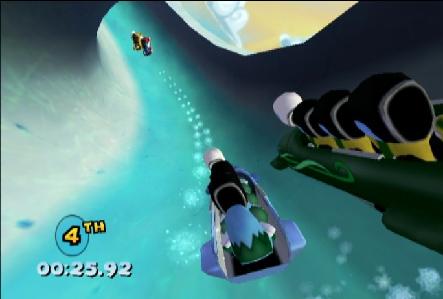 Gameplay
Downhill sledding has not been approached too many times in gaming, and the best comparison to Sled Shred in this area that I can think of is the penguin race from Mario 64. There are 4 different sleds you can use in the game which each play very differently. I will get to those in a minute though. First let’s talk about the races themselves.

Story Mode is the mode you need to start with and due to nothing, not even power-ups being unlocked for other modes from the start, this mode was the first I jumped into. The main objective in story mode is to get 1st or 2nd place out of the 4 racers or teams you are up against while traveling to new maps as your progresss . Using the WiiMote, Classic Controller, or Balance Board, you slide downhill and avoid obstacles to cross the finish line. I will say that the first half of the game is extremely simple. Most races can be won with little effort but the game was still fun to play regardless as each sled was a different experience from the next.

Power ups consist of different items found on the track which can help during gameplay. Most prominent are the snowballs, which can be gained by getting the snowflake icon in various locations on each map. Tossing a snowball is as simple as it sounds and doesn’t require much aim at all for a successful smash. By gaining three on certain levels, you can use a super move with certain sleds which is also a bit rewarding. There are also Sun icons which boost your time for landing tricks, and a few other random power-ups such as speed boost tunnels are also present to assist in speed. Keep in mind though that even these must be unlocked, but it really isn’t too hard as every race you complete in story mode give you something new and most power-ups are given near the beginning of the story. 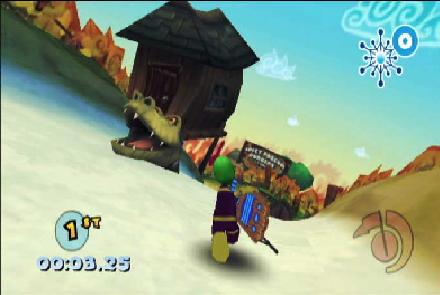 Now for the vehicles, or sleds, you have to alternate between an intertube, disc, two-man toboggan, and of course a four man bobsled. The intertube is the easiest to use as it controls very well. Players can jump over obstacles and braking and speeding up by leaning forward or backwards is accurate and doesn’t slow down the matches at all. The next sled is the disc, which has a special power you can activate which whips up a tornado quickly, delaying all those behind you for an advantage. The disc also makes jumping and landing much more simple and speed is increased quite a bit over the standard intertube. With the toboggan, the game puts you with an AI player, and the two of you must race down together. With this sled being a bit slower, you must work together to lean with your partner to gain speeds.

The last and most important sled is the bobsled. This was my favorite in the game as it controls without gimmicks or power-ups and is by far the fastest in the game. There is a huge amount of challenge when you get up to the bobsled races and it can come down to making a proper start-off by rapidly shaking the remote at the beginning of a match. Bobsleds travel fast and the races are more enjoyable, but the game seems to have hiccups from time to time frame-rate wise as if it were having trouble keeping up.

When you complete the game, replay value will not be hard to find as with the in-game achievements to unlock as well as multi-player and many other challenges to keep you busy, there is a reason to return to the tropical iced world many times over.

Graphics/Audio
As far as the characters go, think of the Miis, add a bit of height and add floating hands and you have the racers in Sled Shred. Each character is detailed differently and the game adds a bit of personality to the title. The environments you race in are bright and with the characters make the game stand out on its own which was a plus for me. From giant gators to sandy beaches, each area brings a new feel to the game. Besides a few bobsledding framerate issues, everything plays smooth and looks just as good.

The music is pretty solid, but nothing too memorable. With this genre of game though, music isn’t too big of an issue to start with. There is a voice-over for Coach Mon which is borderline Sim-lish and added subtitles used to translate. Even with the odd language, personality is still present in the small bit of voice work though, and it was a plus to hear some of the sounds made by the characters coming from the Wii-Mote, even if some sounded more like squeaks than anything else. 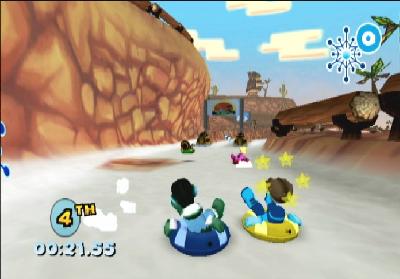 Overall
Sled Shred is a lot of fun to play and with all of the the various races and wacky costumes and characters, it thrives with personality and charm. The game does have it’s small issues such as framerate trouble and some unlockables that shouldn’t really be an unlockable rather than part of the main game to start with. Overall, with the price and the fun factor in mind, Sled Shred is one of the better racers on the Wii and adds a unique twist on racing games making it stand out in a crowded market and definitely gets a recommendation to anyone looking for a fresh, off-beat experience on the console.

I Give Sled Shred featuring the Jamaican Bobsled Team: