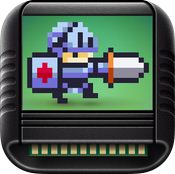 The game industry has reached a point in its long life where it now exists in two different universes at the same time: We live in an age where consumers demand perfection and with that demand comes “next-gen” titles that both look brilliant and play even better. On the other hand, we’re also a generation that longs for a nostalgic feeling while playing games, this is what forces us to also want retro-style titles.

There are an abundance of games that are made in that fashion, they implement 8-bit or 16-bit graphics with a soundtrack to match that reminds us that gaming “back in the day” wasn’t so bad. “Slayin”, by Pixel Licker Games and FDG Entertainment, fits into this description quite well; it’s both old-school yet playable and enjoyable to a huge degree. It’s a game that takes us back to our younger days of gaming yet, at the same time, gives us something new to play around with. Keep reading to see exactly why this is. 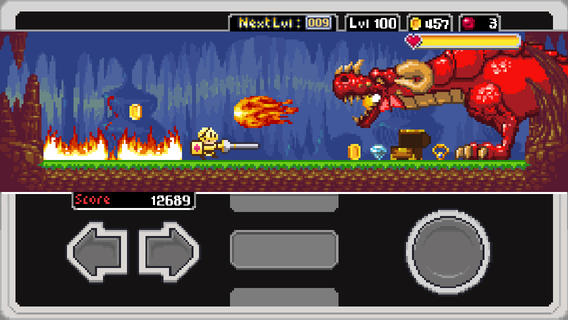 “Slayin” is a game that takes the concept of traditional adventure/RPGs and turns it into a quirky endless title that will earn its place on the main screen of your mobile device for many months. Despite its lack of story it does have a fairly highlighted theme and that’s basically old-school RPGs. As you start the game for the first time you have but one choice of character and that’s the Knight, throughout gameplay you can unlock other characters like the Ninja, the Archer, the Mage, and so on. As the Knight (or any other character you unlock) you’re thrown into a battlefield that is the size of your mobile device and that is all, there are no continuing levels, what you see is where you fight.

There are literally three controls in this game, I know it may be confusing by try and keep up would you? The directional buttons which have you walk either left or right and the jump button are all you have on your side while fighting hordes of slimes and demons. Your character generally sticks their weapon out infront of them so any monster that touches it usually gets itself an instant death, you basically juggernaut your way through hordes of enemies while trying your best not to be hit by them. Throughout the game you earn gold which will allow you to purchase upgrades like bigger weapons and sturdier armour which really helps for when you have to tackle bosses at the end of levels, that’s IF you make it to the end of the level. 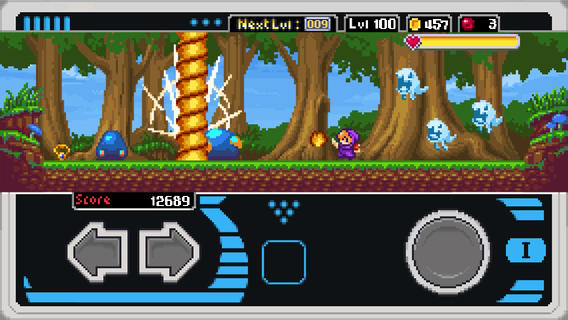 The point of the game is not really to survive, it’s essentially to test how quick your reflexes are. Despite having only three buttons, it is a game that actually takes a great deal of skill to play through, I highly doubt the general masses will get through more than five or six levels of this game at a time before dying and having to start all over again. I’ll say this much; the fact that once you die you have to start again is not actually a bad aspect of this game because you’re constantly doing it, yes it gets frustrating when you get really far into it and then have to start over again but going into this game thinking you’re going to beat the entire thing is not a mindset anyone should have while playing.

“Slayin” also has a, kind of, quest system in place where you’re given three little tasks to do at any given time and you complete these tasks just by playing the game normally. It could be something like “kill 20 slimes with a silver sword” and doing so will award you with more fame points once you die which can be used in the “tavern” section of the game to customise your layout, unlock new characters or even decorate your tomb stone. “Slayin” has a gameplay style that’s so simple yet so challenging, it has coming back time and time again and what’s fantastic is that it’s a game you can literally pick up and play almost anywhere. 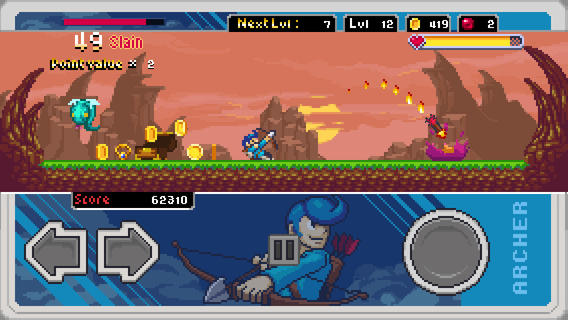 As I mentioned in the opening paragraph to this review; “Slayin” has an extremely retro visual style. Pixel art is its main visual focuse throughout the entire game and the developers have absolutely destroyed the competition with how good this game looks. Much like it sgameplay, “Slayin” has a simple yet highly detailed style; characters and enemies are fairly basic and are animated well but it’s the backgrounds of the levels that really show the range that these developers have when it comes to pixel art.

Every background is very detailed and almost looks like a normal picture but still retains that pixel style which man people enjoy so much. The one thing that I love the most about the way this game looks as that the development team have made it so the game actually looks like it’s being played on an old console, really the screen you watch to actually play the game takes up only half of your mobile devices screen, the other half is the “gamepad” and it just looks great. No complaints here.

This game is auditorally much the same as it is visually. It takes a lot of inspiration from the older games in the adventure and RPG genres and you can really tell. The games soundtrack is entirely made up of chiptune songs and not one time did I feel like turning the volume down, I was excited to hear the music and the way that each song was composed allowed for a certain level of intensity to be injected into each and every level. Remember, this game isn’t that of a slow one so the music had to mirror that and it did so fantastically.

I was actually more impressed with the sound effects, even though the music was great, and I think it was mostly because each and every one was different and gave a better explanation as to what was going on than anything else could, maybe apart from a big flashing sign on the screen telling you. Certain things like levelling up or your armour breaking had unique sound effects tat alerted you and, even though your “HUD” told you what was going on, I could still identify what was happening through sound alone. Certain enemies have certain sounds and most of the time you can anticipate their attacks because of it. I just feel like the audio was done brilliantly, once again, no complaints here. 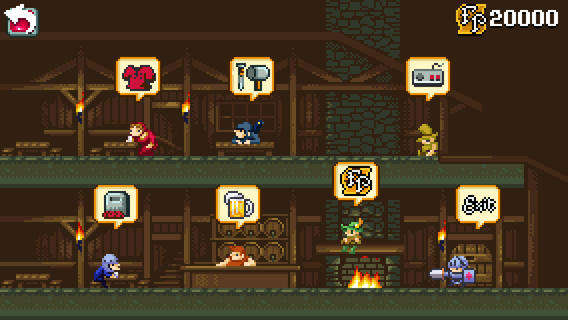 Pixel Licker Games have really made their bones with this title. “Slayin” is just so easy and so simple, you can pick it up and put it down within a matter of minutes which means it is super accessible to anyone. There’s no story so its not like people can be put off by the type of tale it tells nor can they really be put off by a lack of story considering the type of game it is.

It’s a game that brought out the hardcore gamer in me, the gamer that was killed many times while attempting to complete just one simple task and that’s odd considering it’s not really a game for the hardcore players. It’s super addictive and it has the makeup of a great mobile game, one that I’ll be keeping on my devices for a while now. This game is simply perfect for what it is and for $0.99 you really have nothing to loose by going ahead and trying it out. It’s a quirky little adventure that you can fit in your pocket and it’ll keep you entertained time and time again, what else is there to say? This game is great! 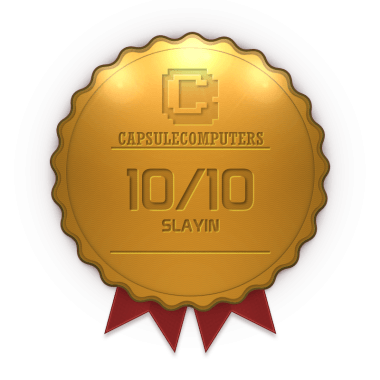