Skyshine’s Bedlam was the first game to license The Banner Saga’s engine. Skyshine’s Bedlam may share similar turn based strategic combat, but Bedlam is an unforgiving place. Failure is permanent in this rogue-like, so players will need to master resource management and combat strategy to survive Bedlam.

The mighty city of Bysantine has simply become too overcrowded. Outside its sturdy walls lay the wasteland known as Bedlam, a dangerous place filled with violent rogue AI and bands of marauders. The player takes on the role of The Mechanic, a mysterious figure promising to take a highly armoured Dozer full of immigrants and lead it through the chaos of Bedlam to the mythical Aztec City. Bedlam is filled with the standard post-apocalyptic cast of mutants, marauders, rogue A.I., and cyborgs who are more than happy to use violence to get their way. Fans of Mad Max, Borderlands, and Fallout will feel right at home in Bedlam’s gritty deserts. 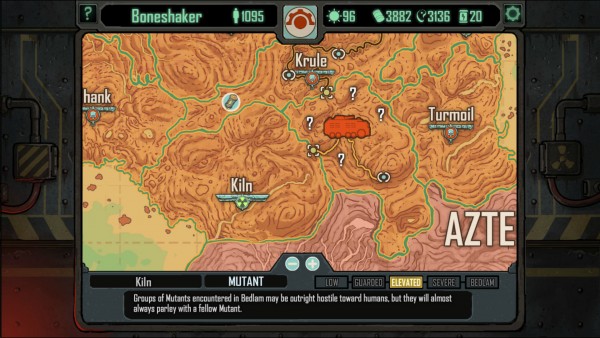 Skyshine’s Bedlam is a rogue-like that mixes resource management and strategy RPGs together. The game is broken down to two main phases, the world map and combat. In the world map, players will guide their dozer through Bedlam, while managing the ever dwindling supplies. Travelling will take time, fuel, and food to complete. Random events occur after arriving in the new area, with players given some choices on how to approach the event. The results range from lost resources, meet ups with strange wanderers, and combat.

Players will need to plan their route ahead of time to acquire precious resources. The actual planning is a bit frustrating. The game’s map is composed of a bunch of small provinces, with absolutely no indication of the road ahead. Plans to arrive in an area to collect a marked resource node can result in an extremely roundabout path that drains more resources than expected. A way to see the next two or three possible moves from the current position would be a much better way of letting the player plan their course in the short term, while still maintaining some element of surprise in the long term. 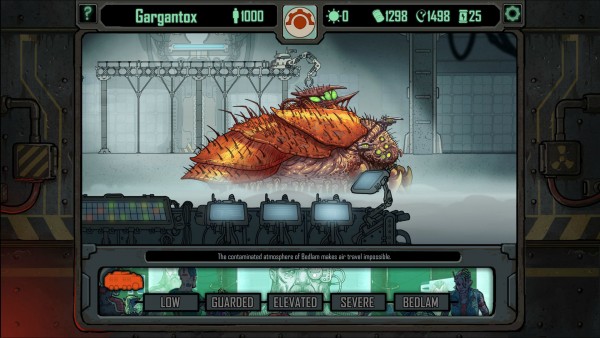 From the map screen, players can upgrade their vehicle, providing lower consumption of resources and faster healing of away teams. These upgrades cost power cells, which are also needed for Equalizer abilities and Dozer weapons during combat. Players are stuck with the hard decision to invest precious power cells for long term efficiency versus short term survival during the next combat phase.

Combat rates on the simple end of tactical RPGs. Before combat starts, players will assign up to four crew members to their away team. There are four classes: tanky Frontliners, Deadeye glass cannons, close combat specializing Trenchers, and well-rounded Gunslingers. Engaging in combat with only three away team members will award the player with extra meat and crude, encouraging the player to only send the exact number of crew members they think they will need. Crew members that are particularly successful at killing the enemy level up after a certain number of kills, giving them a healthy stat boost. Additionally, special elite units will join the crew after they are defeated in combat or a certain item is presented to them. Because of the stat bonuses given to elite units and veterans, other team members quickly become cannon fodder to be sacrificed at any given moment. Additionally, losing one of the powerful characters can be at times frustratingly impossible to bounce back from. 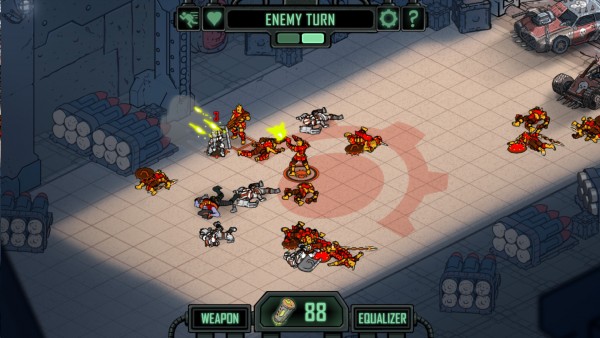 Players can only perform two actions per turn, with movement and attacking counting as one action. I’m not a fan of the short number of actions per turn, as it gives combat a really unpleasant rhythm. Players can also freely spend power cells to perform Equalizer abilities and use Dozer weapons, which can completely turn the tide of a pitched battle. As players explore Bedlam, the inhabitants become more aware of the Dozer’s presence and will begin to throw more and more enemies at the player, making combat increasingly difficult. Combat itself is painfully repetitive due to the limited number of power cells, the focus on elite units, and the singular objective of “kill everyone.”

The game’s controls are very simple and elegant. Gamers only need to use a mouse to control the game. In combat, players right click a square to move their crew member to the box and left click to attack. It is a foolproof control scheme. 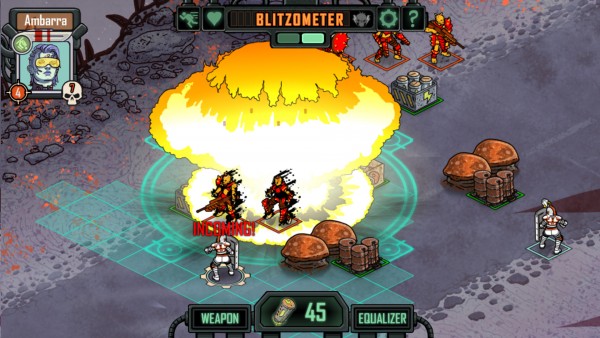 Skyshine’s Bedlam is a perfect comic book version of the post apocalypse wasteland. The art style is bright and bold, looking like a less aggressive version of Borderland’s art style. The graphic options are a bit on the sparse side, with the game only offering fullscreen and windowed options. For those preferring to play on a smaller window, the game can be resized to whatever suits the player in Windowed mode. Fullscreen mode will automatically default to the desktop resolution.

The audio experience is solid. The voice acting is a little over the top, but it fits the comic book style rather well. The soundtrack is an enjoyable listen. Skyshine’s Bedlam’s audio options are just as Spartan as the graphic options, with players only able to toggle the music and sound effects on or off. A volume slider is sorely missed. 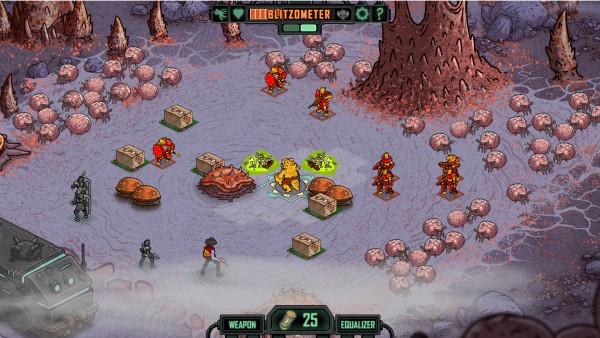 Hardcore fans of rogue-likes looking for something different from the hundreds of rogue-like action RPG that currently flood the market will probably have a great time with Skyshine’s Bedlam. Though the game has a solid audio/visual presentation, the game struggles with repetitive and boring combat and the feeling of being too random to be strategic at times. The developers seem committed on making serious balance changes to the game post launch, with a major patch implementing some big changes released shortly after launch. Unfortunately, it is difficult to recommend Skyshine’s Bedlam to all but the most hardcore at this point in time.