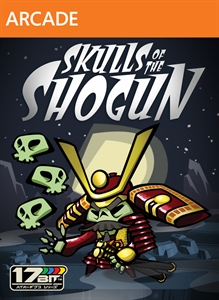 Overview
Founded in 2009 by a veteran of the games industry, developer 17-BIT set to work developing their first title, Skulls of the Shogun.  Fast forward to 2013 and we finally have the anticipated indie strategy darling in our hands.  Does it have a true command of the battlefield as all warlords should, or have Sun Tzu’s deception techniques thrown us for a loop?  Let the battle commence. 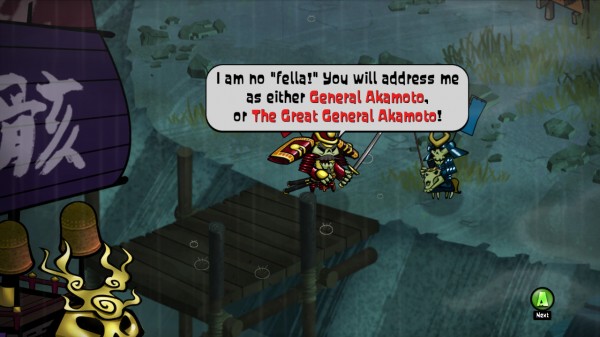 Story
As the game begins, we are introduced to General Akamoto.  Victorious and standing on the precipice of achieving the title of shogun, warlord ruler of all Japan, he is suddenly taken unaware by a blade to his back.  When he awakens, he is aboard a sailing vessel bound for the Shores of the Dead, flesh missing but mustache intact.

Upon landing, he is ordered to wait in line for entry into the afterlife, but the guards obviously have no idea who he is!  Refusing to wait his turn and demanding vengeance for his untimely demise, Akamoto soon rallies a small army of bored soldiers to his cause and begins his journey to the gates of the afterlife and beyond to exact his revenge and become the Shogun of the Dead. 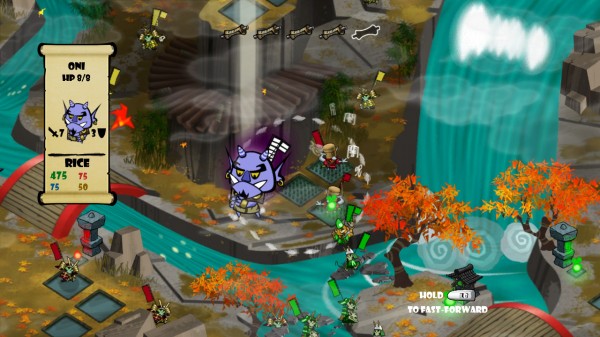 Gameplay
There are two ways to play Skulls of the Shogun.  While the single player campaign will take you on a 8-10 hour journey across the seasons of the afterlife, the multiplayer will gives you a few different options to enjoy a competitive match.  These include 2-4 player games of online, couch, and asynchronous play across several different Microsoft platforms.

After an initial play session or two with Skulls of the Shogun, it could be easy to start drawing comparisons between it and Intelligent Systems’ Advance War series.  Each army involved in the conflict begins with a given set of units, there are locations on the map that you can capture to call in reinforcements, and each side is commanded by a military officer, but Skulls of the Shogun goes so much deeper. 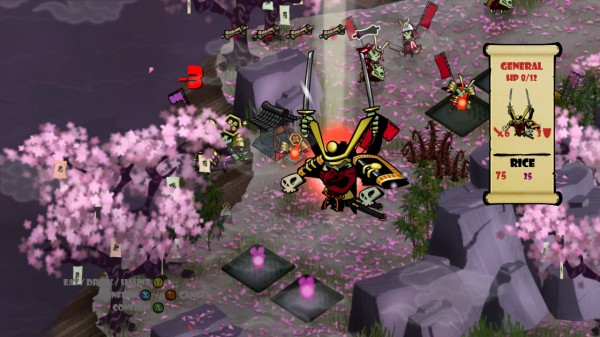 Where the Advance Wars titles are grid-based, Skulls of the Shogun drives all of its movement from a circular sphere of movement for each character.  Each round, the active army is granted five scrolls, each representing the movement and actions of a single soldier.  This lends more weight to the actions your soldiers take, since no matter how many troops you have on the field, only five can ever contribute on a single round.

There are three basic archetypes of soldier: General, Samurai, and Monks.  Between all three archetypes there are still only a handful of different individual soldier types, but each is used to great effect.  First and foremost, each army has a general to command the troops and dole out some extra damage.  If you lose your General, it’s game over.  More often than not, missions will come down to eliminating your enemies’ general while keeping yours alive.  Watching the general work feels like watching a superhero go to work on the goons around him.

The Samurai, which include infantry, cavalry, and archers,  are the backbone (pun intended) of your army’s work force.  Infantry are a bit heartier, cavalry can travel long distances, and archers have great range damage but will fall to pieces in close combat.  With proper tactics and patience, the Samurai caste will win your wars, and you’ll feel like a boss for helping them get you there. 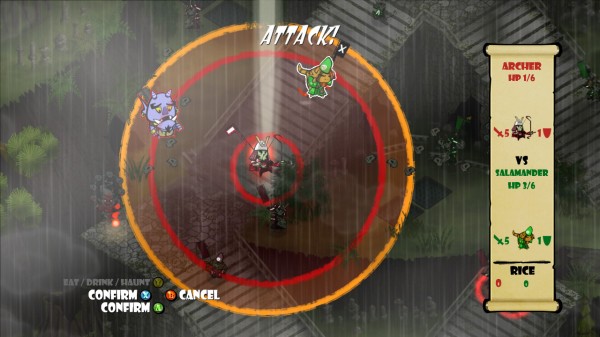 The Monks are a special class of soldier in Skulls of the Shogun.  They will only join your forces if you haunt their shrine.  There are three types of monks.  The Fox monk focuses on healing magic, the Salamander monk breathes fire and focuses on destructive magic, and the Crow monk utilizes wind and trouble-making magic.  Each can be very effective in a given situation, and when they’re missing from your army, you’ll definitely notice it.

Over the course of a mission, every unit has the potential to get stronger.  When you defeat an enemy, their skull is left on the ground.  Instead of utilizing an action, a unit can decide to consume the skull of the fallen.  The general and his samurai will gain health (both as a heal and to boost overall capacity) with each skull consumed, where each monk will gain a new spell with each skull eaten.  When a unit has eaten three skulls, they transform into their “demon” form, granting each unit a particularly useful skill.  A demonized general, for instance, can perform up to three actions per turn instead of just one, or a demonized fox monk can resurrect dead soldiers. 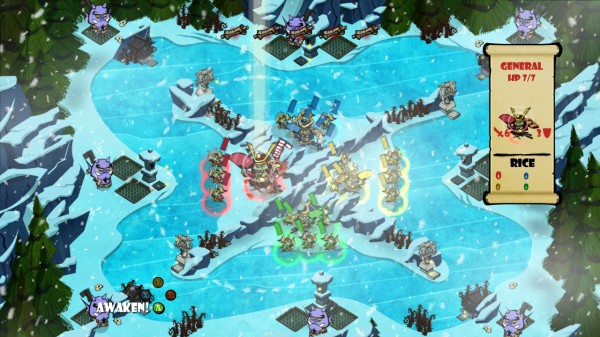 As an added bit of strategy, soldiers can stand next to one another to form what is known as a “soul wall.”  This gives the units in that wall added defense, but it also has an added benefit in that no unit behind the wall can be targeted.  This is great for setting up archers or letting your general meditate.

Most maps also have several features built into them.  There are rice fields your soldiers can “haunt.”  Once taken, each field will give you rice (the primary form of currency) for up to six turns, and then those resources are forever gone.  You can use that rice to summon new units to the field or perform special skills.  Also built into the terrain are bamboo and brambles.  Knocking an enemy back into the brambles will cause extra damage, while hiding your units in bamboo gives them a little extra chance to dodge an attack.

Skulls of the Shogun is an aesthetic joy to experience.  The art design of the characters feels reminiscent of The Grim Adventures of Billy and Mandy or some other Saturday morning cartoon.  Bright, vibrant colors adorn each army, while the Asian-themed environments add a sense of place and feel to the world.  The music in the game is a mix of traditional Asian with modern pop music, though it’s ultimately fairly forgettable.  The theme that plays when you complete a mission, though, will take you right back to the days of your childhood, conquering a Super Nintendo or Sega Genesis game. 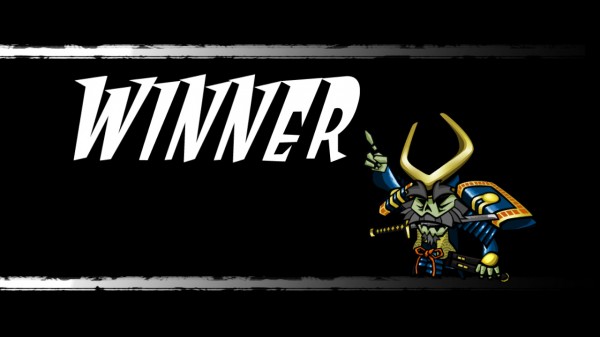 Overall
Strategy game fans with the means to get Skulls of the Shogun would be doing themselves a disservice to pass it by.  The art is bright and enjoyable, the humor will have you chuckling along, and there is a great strategy game at its core as well.  The multiplayer has 17 maps to keep you occupied and the 8-10 hour long campaign is a lot of fun, though the faint of heart may want to set the difficulty to casual and just enjoy the experience.  While it may not appeal to all audiences, folks who have been looking for a great strategy game on consoles for the past few years need look no further.