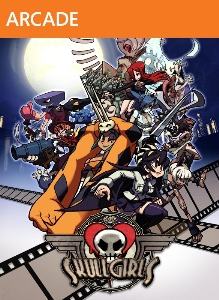 Skullgirls was unveiled last year and it immediately turned some heads because it had a rather quirky and unique art direction and style to it. Announced as a digitally distributed title, it initially may have come across as another simplistic and gimmicky fighting game that was just going to be a bit of fun. Fighting game releases on digital platforms thus far have only been re-releases of very retro titles with online functionality. There really hasn’t been a major new IP exclusive to the digital platform until Skullgirls.

Skullgirls is pretty much the brain child of Mike Zaimont and Alex Ahad. Mike Zaimont is well known in the fighting community as ‘Mike Z’ and he brings in his experience and expertise as a tournament level player, while Alex Ahad provides all the artistic and creative juice to create the world and characters of Skullgirls. The end result is a fighting game made by passionate fighting fans for fighting fans. It’s out now for the Xbox 360 and PlayStation 3, with a PC release to follow soon. 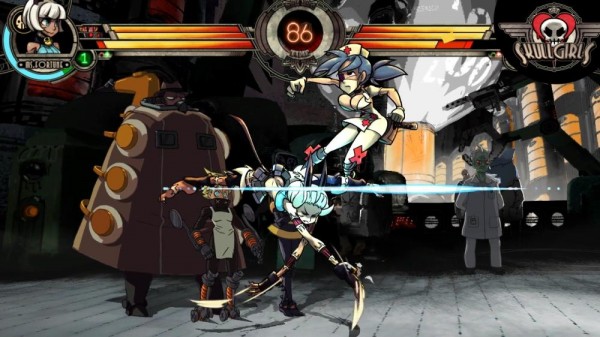 Skullgirls contains a rather unique and refreshing world that has a ton of character and style. The basic premise of the game revolves around these female combatants, who battle it out in a tournament to claim the ultimate prize, the Skull Heart, an ancient artifact that has the power to grant any wish of its holder for a price. However, the Skull Heart also consumes and corrupts a wielder who carries ill intent, turning them into the monstrous Skullgirl.

While the basic premise sounds simple enough, the plot of the game is still fairly convoluted and deep, and the game’s characters have very rich backstories and personalities. The game’s story mode takes you through each character’s personal journey and their motive to acquire the Skull Heart artifact, during which you meet several other support characters. It’s actually a fairly interesting story but it gets plenty crazy and confusing, and the final ending in particular really makes no sense. In a way, it’s almost as if the game taking a stab at how convoluted and nonsensical plots can be in modern fighting games, in particular the BlazBlue series.

That said, the story is entertaining and it will amuse you just because it’s so blatantly over the top and ridiculous. It still benefits from a more Western style of character portrayal and storytelling, along with some elements of Japanese anime conventions that are thankfully not too overpowering.

You will appreciate the unique characters as they are really interesting and have so much richness in their backstories and portrayal. Also, the in-game world is very inspiring and just brims with life and personality. Skullgirls definitely deserves praise for having such a rich setting and world, even if the delivery is a little crazy. 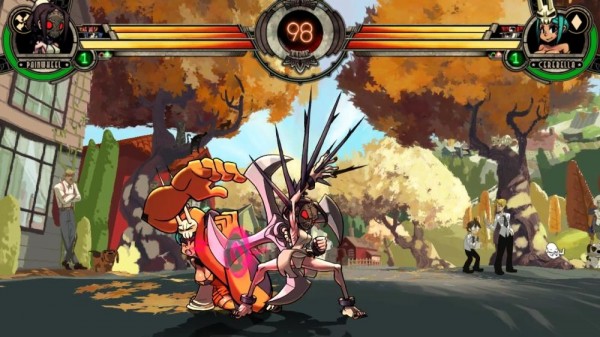 Skullgirls is uniquely remarkable and exceptional in its aesthetics. The visuals and art style is so refreshing that you’d be hard pressed to find another fighting game that looks quite like it.  It has a strong 1940s-1950s American pop culture vibe to it but with a very strong postmodern twist. There are traces of Japanese anime/manga influences, but thankfully they are weak as the overall art direction of the game is dominated by a profound Western comic book/cartoon influence with a ton of personality and flair. The character designs are out of this world and will leave a lasting impression and being an all-girl fighting game, they are heavily sexualized but in a more Westernised manner.  The characters designs range from crazy, to scary, and even elegant and pleasing.

The game’s graphics engine is unbelievable and is perhaps one of the best looking 2D fighting games you will ever see. The character sprites are amazing to look at and have a ton of detail and character, and their animations are absolutely stunning, effortless, and fluid. It’s like watching a modern day animated show as sheer amount of detail and animations is just crazy. Not to mention, the stages and backdrops are pretty awesome too with a ton of artistic flair.

This is a truly fantastic looking game, and while the art and character designs carry some traces and influences of other fighting games, they are but homages. In the end, Skullgirl has a look that really belongs to it alone. 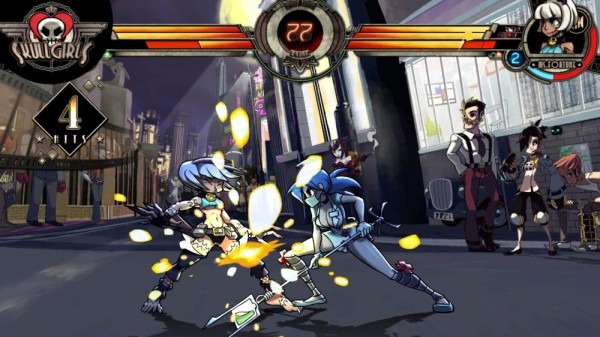 The soundtrack of Skullgirls is just brilliant. You will find traces of several musical styles and themes, in particular Jazz, with heavy use of piano. It’s a varied and unforgettable score that even has a few lovely vocal tracks thrown in. The soundtrack, like the general vibe of the game, draws heavily upon the 1940s-1950s American culture. In a much similar fashion to games like Bayonetta and even the first Bioshock.

The main reason why the soundtrack is so stellar is because it was composed by acclaimed video game composer, Michiru Yamane. She is most famous for the amazing music she composed for several Castlevania video games, and while the style music in Skullgirls is much different, it still retains some of that haunting aura that characterised her work in Castlevania. 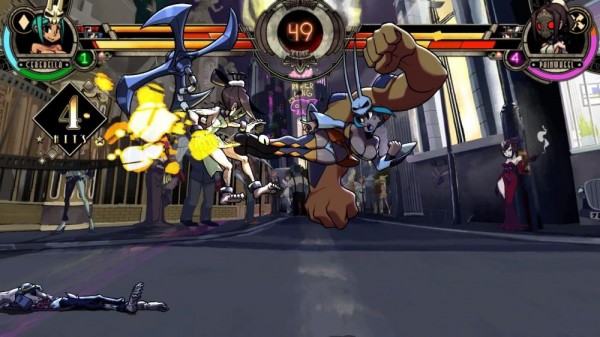 The moment you start playing Skullgirls, it becomes clear that this is a refined fighting game created by people who are passionate fans of the genre. It’s mechanicially sound, very accessible, and has amazing depth to it. It borrows gameplay elements from fighters like Marvel vs. Capcom and Guilty Gear, but like everything else about Skullgirls, even its gameplay feels refreshing and unique.

The core fighting mechanics have all the necessary intricacies that characterize modern fighting games, and are beautifully implemented. It includes things like cancelling, dashes, recoveries, staggers, and all the tools that you need to create a refined tournament worthy fighter. The core combat mechanics are a lot of fun, allowing you to exercise creativity in creating massive chain combos with great fluidity. It has a tone of crazy special moves and super combo attacks, likes of which you may not have seen in other fighting games.

Much like in BlazBlue, each character in Skullgirls feels mechanically distinct. A good example is Ms. Fortune, a fast paced kind of character who has this interesting mechanic where she can throw her head around, and that has some implications on her offensive and defensive tactics. They’ve really put a lot of work into making each of the eight playable characters in the game feel profoundly distinct in play style. It’s hard to do this sort of thing without compromising game balance, but Skullgirls pulls it off rather well. 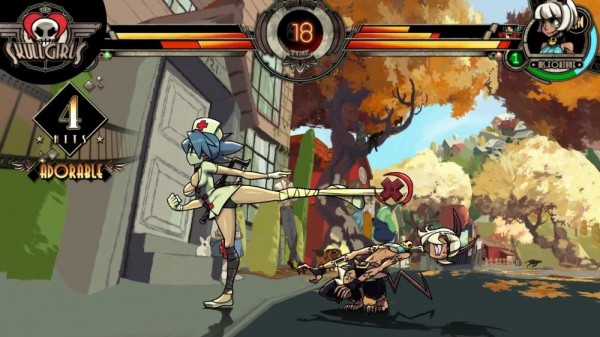 The style of play include the traditional one on one type of battles, but you can also choose to have teams of two or three and engage in some Marvel vs. Capcom style team based mayhem. The team based mechanics allow for some massive multi-character combos and strategies, and includes the usual assist attacks where a team member can just hop in to perform a special move. While the game will ask you to select one of the predetermined assist attacks for a team member, it also has this really cool feature where you can input a command for a custom assist attack. This feature allows for a lot of freedom and creativity in creating some unique team combos.

The game contains the standard modes of play for a fighting game. The story mode is told with beautiful animation stills much like in BlazBlue, and there is a very useful tutorial mode that does a great job in explaining all the mechanics and game systems to new comers. The online mode offers a fairly robust net-code for a digital title, and I had some hitch free match ups with my fellow countrymen thus far. It’s still in its early days so it will take time to develop a thriving local community. The game has an extras mode, which so far only contains the credits sequence and a message promising more content in the future, it’s a shame that these extras weren’t included now as it would have been nice to have an art gallery at least.

The most annoying aspect of the game is the final boss, now fighting game bosses are known to be notoriously cheap and unfair but the game’s final boss, the Skullgirl ‘Marie’, is easily among the worst. She has three forms, and while you will get by the first two forms fairly well, her final form is an absolute jerk as the hit box becomes really small and she just launches a cheap barrage of overpowered attacks from just about every angle. Eventually you will learn cheap ways to get by, but it’s still not a fun battle at all. 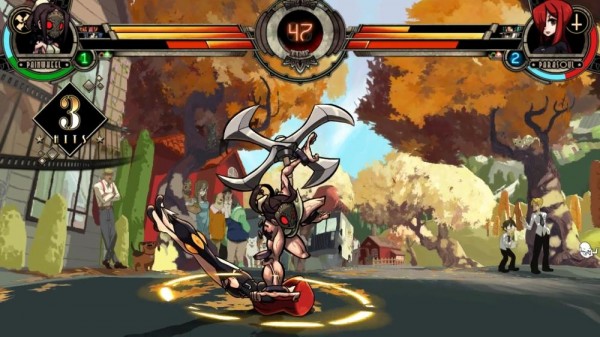 Skullgirls is a pleasant surprise and will perhaps end up being the sleeper hit of 2012. It’s a refreshingly unique fighting game in every aspect, one that is beautifully executed in every aspect as well. It has some shortcomings, but overall this is a fantastic game that has all the elements of a standout title. It will be great to have some more content soon for the Extras section, as well some new DLC characters (just as long as they don’t handle it like Capcom did). For now, what’s present is entertaining enough as the game’s eight playable characters will keep you busy with their distinct mechanics and play styles, and the game’s world, art, aesthetics, and audible flair will impress you. Hopefully this game gains a strong following as it would be great to see more of Skullgirls in the coming years.