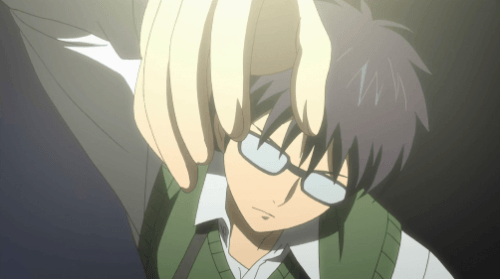 SKET Dance
Episode 27 – “Together with Onee-san and Bad Scientist”

It has been 27 weeks since SKET Dance began, so why now of all places is this a good time to jump on board with SKET Dance if you have yet to do so? Well, this is an episode of SKET Dance that really drives home what this anime is all about. Not only that but there is a new character introduction as well as a great showing from those characters that are already established.

There was so many thing’s I loved about this episode, all of which are reasons I love SKET Dance and actually prefer it over it’s inescapable comparison series Gintama. The way they introduced the new character, Onee-san, was classic SKET Dance. We open the episode with the SKET-Dan in their home-room. Their science teacher (the one who somehow defies the laws of science itself with most of his experiements) informs them that they have a new teacher for home-room. In comes hyper-energetic former children’s programme presenter, Onee-san! The room falls deadly silent.

The episode goes on to give Onee-san the SKET Dance introduction we have grown use to. By the time the episode ends she has developed from simply a former children’s programme presenter to a person with dreams of teaching and overcoming her clumsy nature.

Over the course of the episode the SKET-Dan help Onee-san try to handle her clutz-like behaviour as well as let her assist them in taking on an odd job for Yabasawa, with a hilarious show-case of Switch’s box of misfit inventions in between. 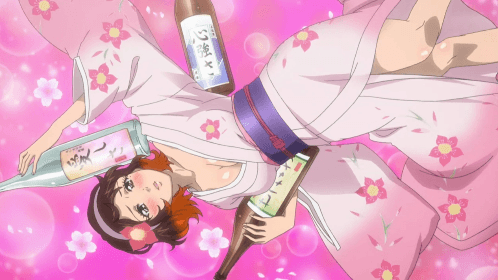 On the topic of the inventions, things like this is why I love Switch. While I absolutely adored his origin story, “Switch Off” a few weeks ago, I needed to see his comedic side again. Now these inventions of his were comedy gold for SKET Dance. We have the bizaare “heads” that serve little to no purpose besides being creepy. The repeated gag of the moe head asking if Bossun’s ramen was cold, really got a haughty laugh out of me.

When the inventions all tied together in the end to solve Yabasawa’s case, I wanted to kick myself for not thinking of it. But it was a great shot seeing Bossun, jetting off with; hover-shoes on, a baboon head backpack on with a bazooka propelling him through the air. The thing that topped it all off was Bossun using the zoom-glasses as his usual concentration mode glasses, it was a perfect touch from the writers on their comedic peak. Little moments like that is where SKET Dance shines through most brightly. 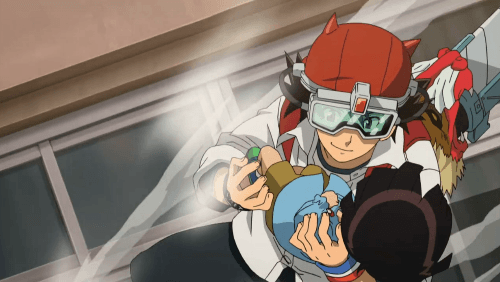 The animation is SKET Dance is usually pretty tame, but they really let put their budget to use with the final scene with Bossun taking off. That scene just looked amazing. As usual the art style is fun and homely, watching this series just makes you feel like you are hanging out with some friends and that is really the experience you look for in comedies like this.

This episode also marks the debut of a new opening and ending theme for the series. Both of which aren’t bad, but I had really grown attached to the previous opening and this one really just doesn’t feel as good in comparison. The ending theme featured a lot of imagery that will excite fans of the series female cast, if you know what I mean. Both were good in general.

Episode 27 of SKET Dance is both a great episode of this series in general and is also a good point for those late to the party to jump on board. It’s episodes like this that remind me why I watch this anime each and every week and will continue to do so.