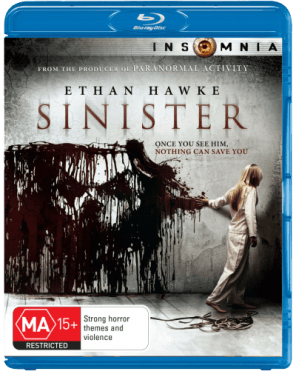 From the producer of Paranormal Activity and Insidious, Jason Blum, and the director of The Day the Earth Stood Still (2008) and The Exorcism of Emily Rose, Scott Derrickson, comes Sinister – a supernatural horror film starring Ethan Hawke as a washed-up true crime writer who moves house to pursue a new, most disturbing mass-murder tale. Icon Home Entertainment has brought the home media release to Australian shores under its ‘Insomnia’ line. But as is the benchmark for the best horror films…will Sinister actually cause you to lose sleep?…

Talk about setting a tone…when a movie starts off with Super 8 footage of a family being hung from a tree in their own backyard, you learn what to expect from that film on the spot. Months after this occurrence, Ellison Oswalt (Hawke) moves his family into the victims’ home, with them being none the wiser. But it wouldn’t be necessarily be a shock to them if they found out, as Ellison – a true-crime author – is guilty of previously convincing the family to move in pursuance of a story. When his wife, Tracy (Juliet Rylance) asks “we didn’t just move two doors down from a crime scene, did we?”, he assures her no…with the dramatic irony of the audience knowing that this is the murder house. 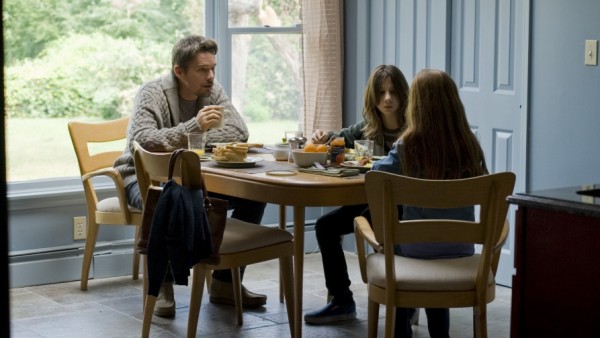 The family’s house-warming period isn’t as smooth as they’d hoped, with their night terror-prone son Trevor (Michael Hall D’Addario) re-experiencing his frightful fits in the first nights. Their other child, daughter Ashley (Clare Foley) is settling in more peacefully, being allowed to draw on her bedroom walls to help make it her own. Soon after moving in, Ellison find a box in the attic filled with Super 8 film reels, and a projector to play them on. They are labelled “Pool Party ’66“, “BBQ ’79“, “Lawn Work ’86“, “Sleepy Time ’98” and “Family Hanging Out ’11”. They sound like innocent enough home movies, and at first they seem like it, but Ellison quickly discovers them to be home video of multiple triple/quadruple homicides. 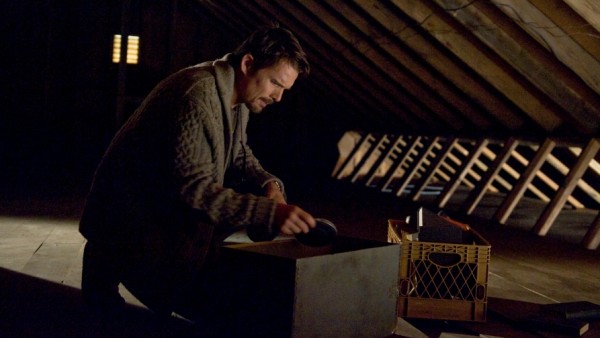 Through viewing these recordings, Ellison discovers a couple constants: an unknown symbol painted somewhere on every crime scene and a dark, unsettling figure present in each. Later, Ellison finds children’s drawings referring to the unidentified presence as “Mr. Boogie”. From this point on, Ellison journeys to discover everything he can about this…’thing’, the cult-like imagery and what ties the murders together. Along the way to doing this, he comes across a helpful and somewhat awestruck Deputy So-and-So (what he actually refers to him as in person, and on his mobile contact) played by James Ransone, and reaches out to a local professor whose expertise lies in the occult, named Jonas (Vincent D’Onofrio). 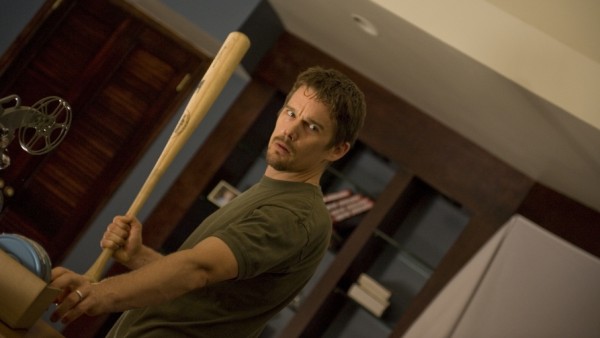 Sinister relies on a consistent sense of tension and dread, with a few pop-up scares thrown in for good measure. Though many readable, common horror movie tropes abound – such as the spooky photographs and supernatural interference – many are subverted, and the premise is definitely unnerving, helped along by the impressive production. The disappointing thing with movie-marketing and advertising is that too much is revealed pre-release, and with Sinister, half the scares have been included in promotional trailers. For that reason, maybe Sinister lost some of its effect on me, and I therefore don’t consider it to be a truly terrifying movie, but the film is so well made and features a brilliant performance by Hawke that I appreciate it on those fronts.

Sinister is very dark, not just in tone, but in lighting and composition. The film is muted in colour, and was shot with rarely anything more than natural light, meaning that night-time scenes relied on being lit by the glow of the projector screen Ellison becomes obsessed with, the moonlight beaming through the windows or some other secondary source such as a laptop screen or iPhone flash (the official screens included in this article have had their brightness/levels adjusted for visibility). This results in a real-life feel without the need to resort to using shaky cam or found footage techniques; Scott Derrickson has now given all future horror directors the blueprint. 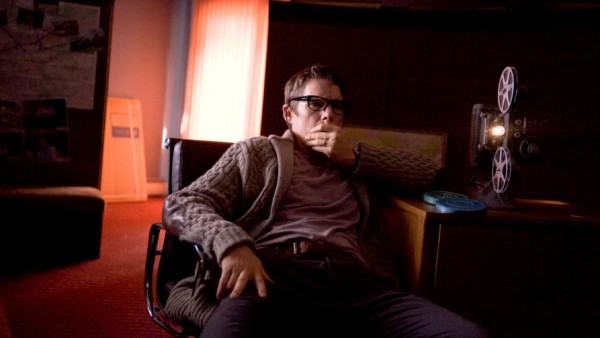 Audio-wise, Sinister is understated; quiet during the day scenes, but as soon as night falls and Ellison decides to turn on the projector for one more bout of observation, or is investigating strange sounds (as you do?) the eerie and ominous music kicks in, filled with buzzing, static noises, rumbling and low, pulsing bass. The dissonant underscore by Christopher Young amplifies the foreboding with these low-frequency effects. Specifically, during the death-scenes in each video, this distorted singing or chanting can be heard that is unbelievably frightening in its own right. Overall, Sinister has one of the best audio treatments I’ve heard in a long time.

This blu-ray release from Icon Home Entertainment holds only two special features. True Crime Authors (9:16) is an interesting feature that has numerous individuals in the field – the majority of them writers themselves – talking about the profession, the effect it has on someone’s psyche and more. Living in a House of Death (11:31) looks at the history of murder houses in America, how real estate companies can continue to sell them, and who exactly feels comfortable living in such haunted properties. Although the extras are scant in quantity and don’t focus on the film’s production itself, they are relevant, fairly meaty and fascinating.

Sinister features some classic horror genre tropes (creepy little girls anyone?), with a somewhat slow burn to a creative two-part twist, although half of that equation was more than hinted at beforehand – it was flat out stated. Yet, Sinister is definitely more creative than 90% of the “horror” that has been churned out in the last decade. It’s not a remake, it’s not shot in shaky cam, and it features a fresh villain – albeit one heavily inspired by The Ring. The blu-ray transfer is great, but I was disappointed to see the commentaries and deleted scenes from the U.S. release cut. All things considered, this blu-ray is a solid release for a solid film.