Sine Mora is scored by the exceptionally talented and legendary video game composer, Akira Yamaoka. His iconic composition style can be heard in games like Silent Hill 2 and Shadows of the Damned, and his work for Sine Mora just adds to his already impressive resume. One thing that’s really admirable about Akira Yamaoka is that his composition style will adapt to the nature and art style of the game, his musical style is constantly evolving and adapting to different contexts, which makes him a truly talented composer.

The score for Sine Mora is a remarkable one, full of dark and surreal undertones that complement that surrealist and diesel-punk nature of the game. The tracks are hauntingly beautiful with a slow and brooding pace, but there are some intense and dramatic moments in the soundtrack. It’s just one of those context driven soundtracks where every track seems to fit seamlessly. 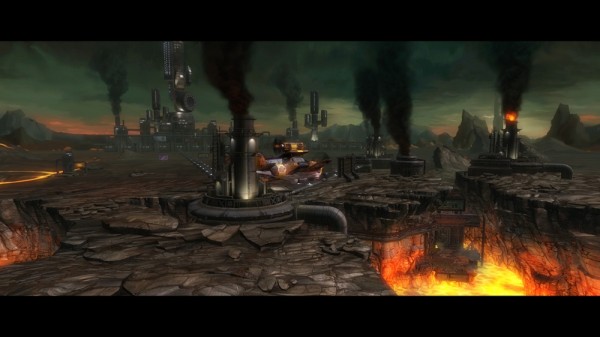 Sine Mora is a horizontal shooter where you progress on rails from left to right as it the case with any horizontal shooter like Gradius or R-Type. The core gameplay foundation is what you have come to expect from the genre, but it introduces some brilliant ideas and modernisations that breathe new life into the tried and tested scrolling shooter gameplay.

In Sine Mora, it’s not just a battle against an onslaught of enemies and hundreds of projectiles, if anything Sine Mora is a constant race against time. Time travel is a key aspect of the game’s story but also serves as the primary gameplay mechanic gimmick. The idea is to ensure that the timer doesn’t run out, and defeating enemies will help extend your timer. Under most modes, the timer also serves as the health bar, as you are able to take hits which shaves off some seconds off the timer instead of an instant death.

It’s not just a race against the clock as it’s also about manipulating time itself using capsule power-ups. While story mode only allows you to slow down time, arcade mode gives allows you to reverse time like in Prince of Persia: Sands of Time. You can choose either of these time manipulations in arcade mode, or even choose the third alternative capsule, a deflector shield. Each choice has a drastic impact on the gameplay and strategy.

The game has three ships much like in most shmups, but what’s really cool is that the game has seven characters with each offering a unique sub-weapon. The sub-weapons range from laser beams to seeker missiles, and it is here that you will notice traces and influences of other shmups in the genre, as veterans will find most of the sub-weapons to be drawn from numerous shmup titles. Arcade mode lets you mix and match ships and characters, and together with the capsule options, adds a large range of combinations and possibilities. 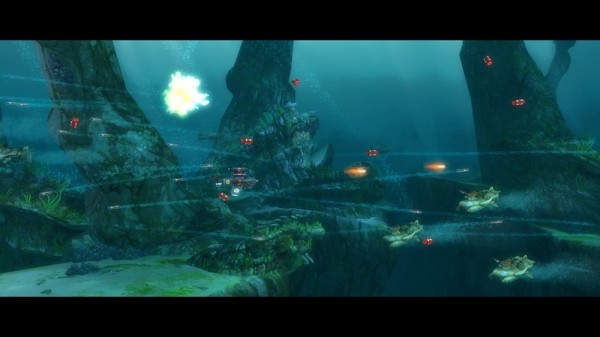 The story mode alone demonstrates just how modern a shmup Sine Mora is, showcasing a marriage between compelling narrative and twitch heavy gameplay that the genre has rarely ever experienced. The story mode of the game is ideally designed, featuring two difficulty levels that provide a very reasonable challenge that will allow you to enjoy the story. You don’t have much of a choice as to what character or ship you want to use, as you essentially follow a narration. Arcade mode and score attack jacks up the challenge significantly but also offer more freedom as to which ship, character, and capsule power-up you want to use.

The action in this game is intense, and the time manipulation and time race aspect adds a whole new layer to the gameplay. It’s an extremely well executed innovation that is really entertaining, and not to mention the boss battles are expertly and cleverly designed. It’s not just a matter of each boss unleashing more projectiles than the next, as they each have interesting design and attack patterns.

The level design offers more than the standard shooting fare as you’ll navigate some small narrow areas and even occasionally engage in a bit of puzzle solving situations, as well as brief moments where the game suddenly uses a 3D perspective. They’re nicely designed levels with decent variety, but the time aspects alone add so much depth and compelling challenge.

Sine Mora is a brutally difficult game, but the progression feels natural. You can start off with the standard difficulty in story mode, and then work your way up to arcade mode which offers a much higher level of challenge. Do not be discouraged if you find yourself struggling early on, it’s a fair challenge that rewards practice and patience. The more you play the more enjoyment you will get out of it. 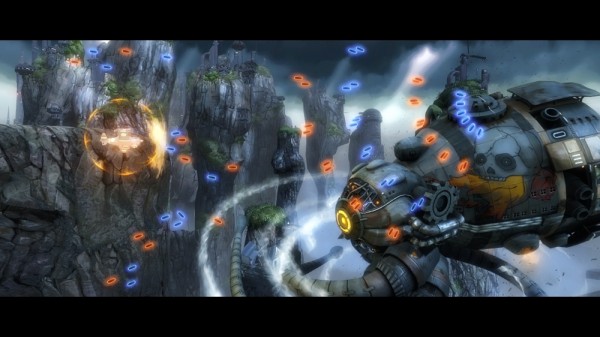 Sine Mora is more than just an awesome playing shmup as it’s a landmark contribution to the evolution of what many view as a very retro genre. Sine Mora takes one of gaming’s most oldest and tested genres and makes it relevant for the current generation. This game is an exceptional marriage of pure well executed gameplay, amazing aesthetics and aural beauty, and a fine story. Sine Mora is truly an achievement in game design, retaining the true spirit of what made gaming so pure in the pre-HD era while also offering the kind of quality and innovation that is demanded of modern gaming.