The shadows of the world have gone awry! So, clearly, it’s all up to one small boy with anime hair to right this wrong, since y’know, adults are hopeless. You must make your way through various puzzles, taking care to adhere to the rules of the shadow land and make sure to keep your shadow within a certain distance. Because this ain’t no Peter Pan after all.

Let me start this by saying that this game is just about the most frustrating iPhone app I have ever played. I have never experienced such annoyance and felt so stupid before. This wasn’t because I knew what I had to do but I just couldn’t achieve it, I get that all the time. That’s old news. No, this is because the tutorial you are given is so scant that when it comes to the second stage and something even mildly challenging happens that (with a short sentence of a hint) could have taken mere seconds to beat, I instead spent far too long on it until I stumbled across the answer by accident. 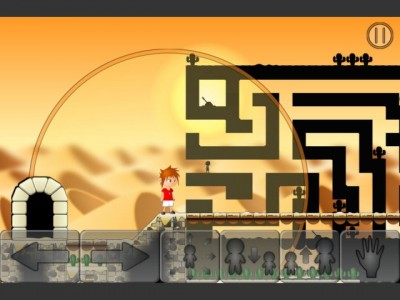 Now, I’m a fan of challenges, I like exercising my brain and making myself think. But to be frankly honest, I do believe that the Silvester’s approach is to iOS games what old school you-die-you-restart-entire-game games are to respawn-forever shooters.

While the difficulty experienced at the start of the game could be fixed with a brief hint, the difficulty as you go on gets even more frustrating. There are parts where you have to move extremely carefully because otherwise all of a sudden your shadow will drop from under you because of hidden moving shadow platforms and you will fail. There is no warning, except perhaps the title of the level, and it doesn’t require any real skill, just luck. 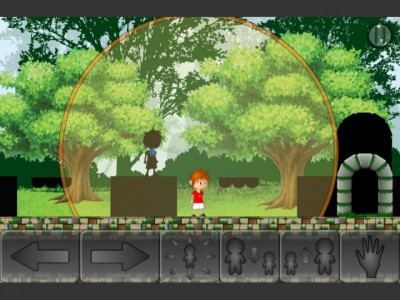 Perhaps one of the most annoying things is that you will have to trial and error a stage a few times to get it right, unless you get lucky. The amount of luck required when playing the game makes it far too frustrating for me. This isn’t the sort of game where you gradually learn tricks and skills that will make you better as time goes on, although you will learn ways to try and harness some luck, although those can vary with each stage which gets you back to square one. 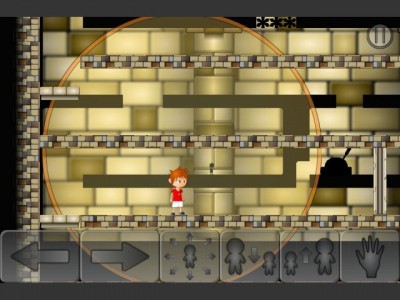 The learning curve is… Well, there isn’t any. The first stage is quite easy in the way that you don’t have to do anything and you’ll pass it, then you have to pick up everything as you go. Unless you have patience and determination, as well as that damn luck, then you won’t be able to slug it out through the stages. You’ll probably end up breaking your iOS device. Maybe invest in a strong case before trying this app. 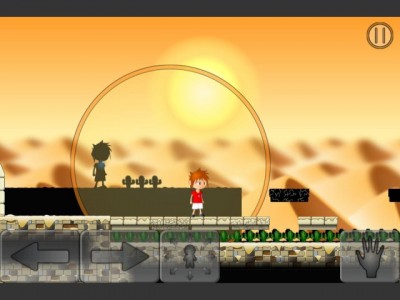 You get to play around with different skills as the game goes on, getting the ability to move your shadow person, shrink them, and enlarge them. These will be crucial in passing stages and just add to the possibilities and the thinking-on-your-feet element of the game. In fact, the solution to one particular stage that was giving me trouble came to me in my sleep. Because that’s the sort of game it is, it haunts you even as you dream.

The graphics are pretty simple and reminiscent of old school sidescrollers, which fits in with the crowd who would really enjoy this game. These graphics may be lost on those who love their high def crash-bang stuff, but it helps add to the nostalgia effect. 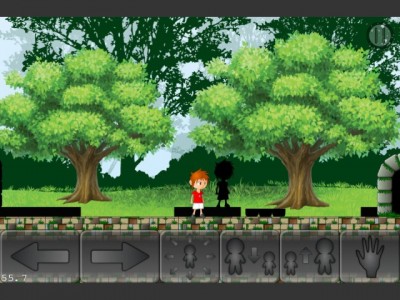 The soundtrack is this really soft, fantasy type of music. It’s the sort of thing you’d expect from Zelda, or some children’s cartoon movie. It certainly doesn’t help any annoyance you might get from the app to have this supposedly soothing music in the background. Again, the soundtrack will add to the nostalgia.

This is definitely a game that will either frustrate you until you throw your phone at a wall or will be something you love that makes you think of ye olden days when games were unforgiving and you could just suck it. And, I’ve said it numerous times and I’ll say it again, you need a damn hefty dose of luck. I do believe, however, that apps should be accessible to a wide range of skill levels (considering the huge market that apps reach), so they probably should have invested in a hints section of some sort.

This is a game that you need a truckload of patience, smarts, skills, and some more patience. So if you have that, then go noble adventurer and save the world!