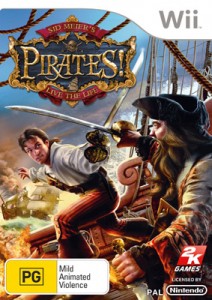 Sid Meier’s Pirates is a game that has seen plenty of ports during its time in circulation. From the notable PC version, to some of the other ports on various home consoles, it is a game that has seen a lot of action over the past decade or so. So how does this venture for the series on Nintendo Wii  compare. Does it live up to the reputable reputation built up by its predecessors on the PC, or has there been mutiny aboard the 2K Games ship, and this is the result of the new captaincy. 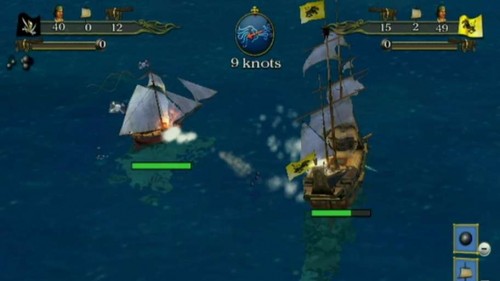 The story is a classic tale of revenge. Kick-starting with a cutscene, the game sees a boy sitting down with his family for a hearty meal, a celebration in fact, as after being indebted for years to Marquis Montalban, the luck was finally due to change with the arrival of their fleet tomorrow. Close-knit family cheer is the meal of the day here, as the entire family celebrates the end of their austerity, and the start of their prosperity. However, their feast is brutally interrupted by a band of men, the Marquis himself bearing awful news: the fleet is no where to be seen and the debt is due. As there is no way to pay them to sort out their debts as the family is poor, the unwelcome debt-collectors see only one way of settling the debt: imprisoning the family as slaves. Fortunately, it doesn’t end here, because not only would it be the shortest and least active game of all time, but somehow, the young boy manages to struggle free and escape this horrible fate. And so the vengeance motif behind the storyline is born. The young boy promises to himself to rescue his family by freeing them from their unjust enslavement.

The plot then fast-forwards some years later, seeing your young boy now grown into a young man. It is here where your journey starts, cast as this young man as he seeks out a suitable ship to join as part of the crew. This is one of the many choices, and ultimately customisation, options available in the game, in this instance choosing to join one of four nations: the French, the Dutch, the Spanish, or the English. This choice isn’t just cosmetic. Your choice will correspond to the strength and size of your fleet, the missions you are involved in and the amount of ports you will have control of, and in a slightly indirect way affects the difficulty of the game, as by picking up one of the more built-up nations, you leave yourself less work to do. There is, however, the normal difficulty settings which outline the level of challenge in black-and-white terms. The difficulty is actually one of the strong points of the game, catering for all kinds of skill levels, from the very inexperienced with the lowest setting, to the absolute veteran who can amplify the difficulty to the full, as well as picking the hardest nation. 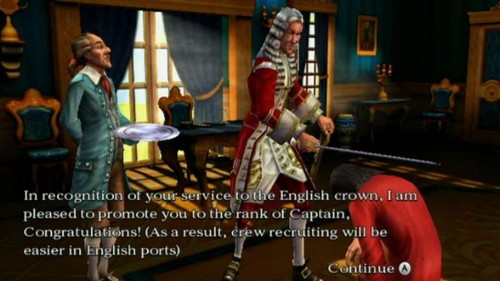 Although it is a work of fiction, the story stays true to the 17th century setting, with period details and even some infamous pirates from history such as Blackbeard and Captain Kidd making appearances. While it’s hardly historically accurate, they’re thoughtful additions that help to add to the authenticity of the experience on the whole. The game actually starts in 1660, but plenty of time elapses as you sail the sea. This is partly because it is highly uneventful and, for that matter, boring, much like I imagine real sea travel used to be for pirates. Most time is spent sailing a barren sea, with only the occasional encounter with other ships to engage. These sections are entertaining, introducing you to some on the classic mini-games from prior iterations in the series, as well as the Wii-exclusive new ones. In total there are five different mini-games in this Wii version. These are:
– Dancing
– Sword Fighting
– Ship Combat
– Bombardment (Wii-exclusive)
– Lock Picking (Wii-exclusive)

‘Ship Combat’ is by far the best, purely for the opportunity to live out those dreams of being a swashbuckler of old yourself. It’s responsive and the controls for this particular section are simple but well-mapped out on the controller nonetheless. Unfortunately, the same cannot be said for some the other mini-games. Such as ‘Sword Fighting’; it is clumsy and unenaging. The swordplay isn’t precise and for this reason, the result is an unsatisfying, wrist-flailing experience. Or one of the new additions, ‘Lock Picking’, which is just too awkward to warrant any kind of fun. 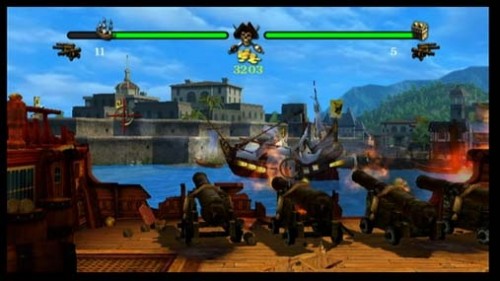 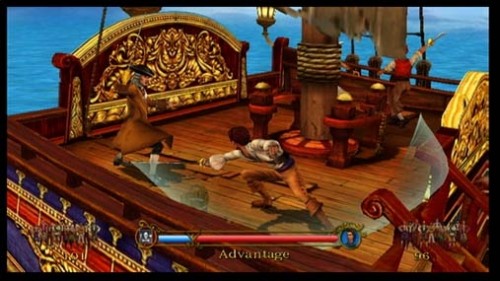 Overall, Sid Meier’s Pirates is a slightly odd choice for a Wii game. Almost every inch of it feels like a PC game, and it possesses a level of detail unparalleled by any other Wii game. However, it is for this reason why it doesn’t really work on Wii. The customisation offered is impressive, but most will find it too in-depth and as a result, boring, especially considering the average Wii owner. The controls for the most part are lifted from keyboard and mouse and plonked onto the Wii Remote, using little/no motion control elements, and the parts that do feature motion control just feel gimmicky. It’s got a decent level of variation in regards to difficulty, which could entice Wii gamers looking for a more ‘core experience, and as one of the only pirate games on Wii, punters may have no choice but to pick this up in order to fulfil their fantasies of becoming a pirate. Still, I can’t help but recommend the far superior PC version of the game.