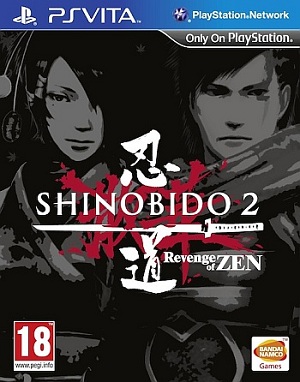 Shinobido 2: Revenge of Zen is one of the launch titles of the Playstation Vita. Developed by Acquire and published by Namco Bandai, players take control of Zen, a ninja seeking revenge while interfering in an ongoing civil war in the land of Utakata. It is a stealth action game, which means a lot of sneaking around and assassinations from behind. It also means coming down upon your enemies from higher ground. Is Shinobido 2 worth your time and money as a launch title for Sony’s next generation handheld? 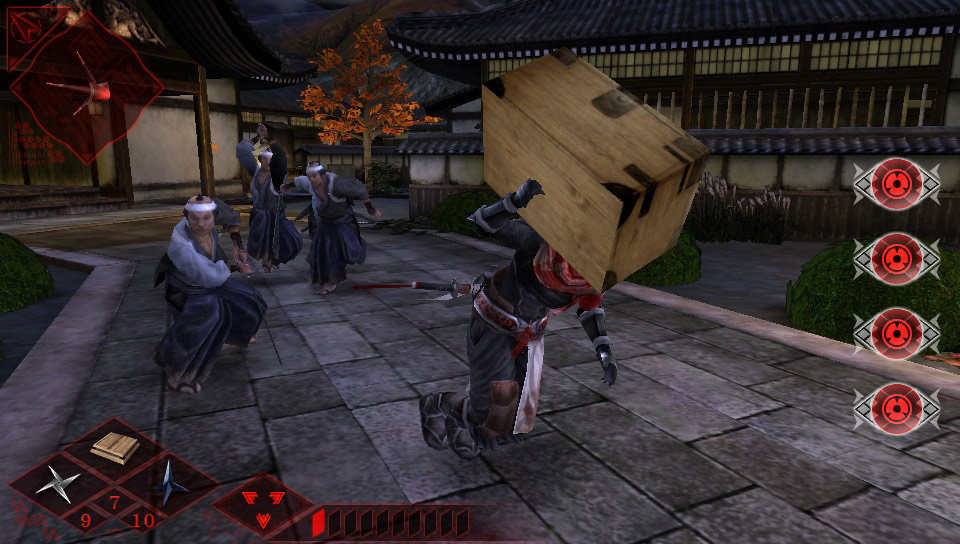 Shinobido 2: Revenge of Zen stars a ninja who goes by the name of Zen. After an encounter with another ninja, Shu, and his accompliance, Nagi, kill a close friend of Zen’s, he vows revenge over her death. Meanwhile, as Zen battles his own personal war, another war rages in the land of Utakata. Three rival clans proclaim that their clan is the ruler of the land and their forces are tested on the battlefield. Zen completes tasks sent by the leaders of the three clans while searching for information on the whereabouts of Shu so that he may complete his revenge.

The story could have been told better. This is because of the two separate tales that are running parallel. On the one hand, there is a civil war being conducted while Zen is trying to find Shu for his revenge. While I can see they are trying to weave the two stories together, it simply doesn’t work. Although easy to follow, it becomes formulaic, even when a third main storyline (which involves magic mirrors) comes into play later in the game. 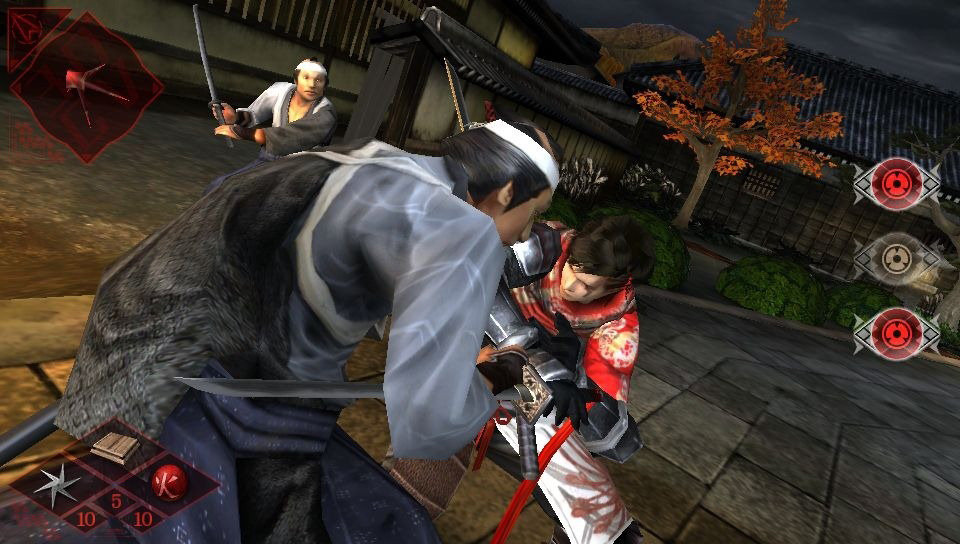 Stealth is the core mechanic in Shinobido 2: Revenge of Zen. As a ninja, being stealthy is rewarding. You will learn different stealth moves, the basic being moving up behind the enemy and grabbing them, sending your blade right through the enemy’s body. Zen can crouch and sprint throughout the maps to aid in his exploration. He also wields a blade, which he can fight with or perform a stealthy assassination. Throughout the game, Zen will gain new abilities and skills to use during missions, including the ability to glide over gaps with his Fukurou.

As Zen, you undertake various missions with the three clans. At first, only a few types of missions are available: assassination, which involves murdering an important figure of the clan (usually a merchant) or obliteration, where you must wipe out a small force of one clan’s troops in an area. As you progress through the game, more mission types open up, such as robbery, where you steal provisions or a skill book from one clan and give it to the other, kidnapping, where you will kidnap an agent or someone important to a clan for another to exploit and rescue, where one clan wants you to rescue someone important to them after being kidnapped. Completing the missions is the only way to progress the story. Every so often a story mission will pop out. Afterwards, it is back to working for the clans. Doing missions affects both your reputation towards them and their military might.

The game offers a ranking system after the completion of the mission, whether it is a success or a failure. They range from SS (which is the highest) to an E (which is the lowest and usually obtained after a failure). Items, experience points and money are usually the rewards for each completed mission. Zen can level up with the use of experience points, where he can increase his stamina, offense, defence and the length of his grappling hook. Experience points fill up a levelling bar, while SP are used to increase Zen’s overall statistics as a ninja. Trophies are also present in Shinobido 2. 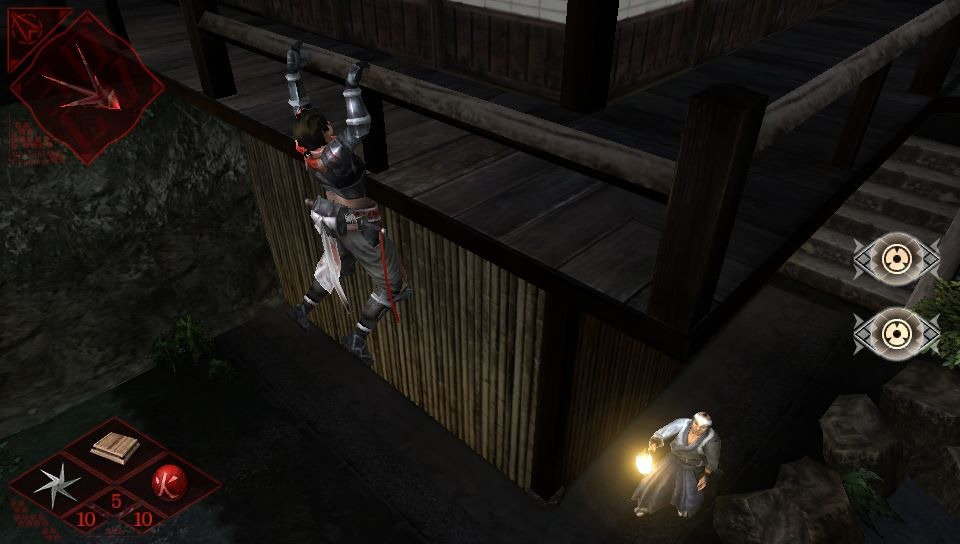 Outside of the missions, Zen has a tool belt where he can hold up to three types of items to use during missions. Items obtained as gifts from the clans or obtained during missions can be used to help Zen throughout the mission. They can also be used in alchemy. Alchemy allows Zen to create medicine, smoke grenades or sushi with enhancements for himself or ailments for his enemies. They can also be given as gifts to the leaders of the three clans to increase their reputation towards you. There are three types of items available for use: smoke grenades, medicine and sushi. Each of these items can be used by both Zen and his enemies as they can both hold status enhancements and status ailments.

The use of a mission system is fine; however, the way it is conducted is strange indeed. Every time you complete a mission for one of the clans which anger the targeted other, then the reputation should be affected as such. However, it does not end up that way. In fact, despite being considered angered when one looks at the mission brief, the reputation towards said clan is unaffected after the mission. The amount of missions with the clan you have the highest reputation with do increase throughout the game, however, it does not mean missions with the other two clans disappear. In order to reflect the reputation, the mission count should reflect the clan with the highest amount of respect with Zen.

There are touch controls added to the game but they are not compulsory to use, neither are they intruding. On the front touchscreen, the player can bring up the map by simply touching it. The map offers a basic outline of the area and a red arrow, symbolising your position. Other than that, it is a bland map with little information. One can also target an enemy when a small eye begins to appear. However, it can only be used once it is solid. Different eye colours symbolise the attentiveness of the enemy. A white eye means they have not seen you, while a red is the exact opposite. The rear touch pad controls Zen’s first person mode, used to aim his grappling hook and items on the tool belt.

Enemy AI is quite embarrassing in the game, no matter the difficulty you choose. For example, despite being a stealth kill, the enemy does make some noise as they die. In robbery missions where there is a group of enemies guarding the man/woman holding Zen’s target, there are usually six to seven enemies that could hear their dying comrade. Instead, they will completely ignore the sound the enemy makes and continue forward. The first missions will contain some of the worst enemies in the game. Players can simply run behind a corner and the enemy will stop their pursuit, despite seeing Zen run around said corner. There should have been further testing with the AI. 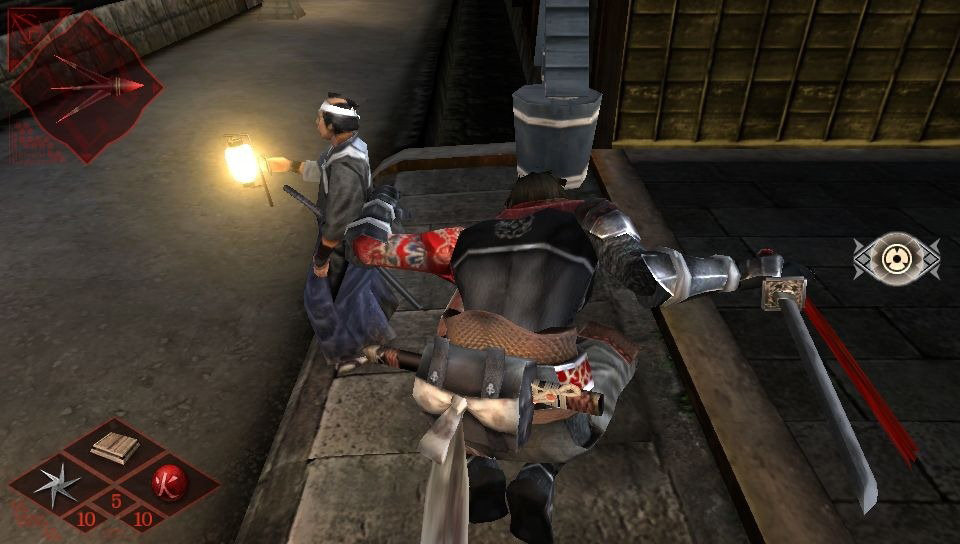 For a handheld game, the visuals in Shinobido 2 are quite impressive. The main players in the story are well-detailed, looking sharp and crisp. The environments are also impressive. Buildings are detailed and quite accurate to the period of time. However, in saying that, Acquire does recycle a lot of the character models and environments, even with assassination targets. Samurai generals all look the same, so do merchants. There will be small variations to distinguish different types of units, but they would be minor. Menus are basic but easy to navigate.

The audio is quite average. The soundtrack captures the time period, but also the mood of the perils in the land of Utakata. The voice acting is hit and miss for me. Since it was developed in Japan, it would have gone through localisation. It does show, as there are some awkward or clichéd moments in the voice acting that made me cringe a little.

Shinobido 2 won’t be everyone’s favourite ninja game, but it is great for those who feel like sneaking up to someone and giving them a stab in the back. While the story could have been told better, it isn’t terrible. In fact, it is quite enjoyable. Gameplay is great, although you will run into terrible AI no matter how hard the game is. The mission format is perfect for gaming on the go. The visuals are impressive for a handheld game but the audio is average at best, with the often cringe worthy moment due to the localisation process. Nonetheless, expect great stealth action that only ninjas can pull off.