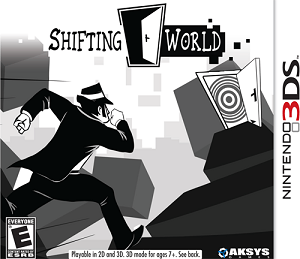 Overview:
Once in a blue moon there are a series of flash games that become so popular online, that they receive a true console counterpart. This has occurred only a few times in the past but it has happened once again with Shifting World. Shifting World is part of the Shift series which has seen multiple flash releases and even has appeared on the iOS. However Fishing Cactus and Aksys Games have chosen to do something that no flash adaptation has done in the past, and that is place the game as a full retail title. Was this a wise choice or could this move have made potential buyers shift their attention elsewhere? 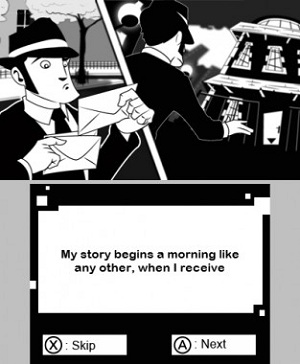 Story:
The unnamed protagonist has received a “mysterious” invitation from someone who is called the Duke of Shadows. When he arrives at the address listed he finds himself trapped in a dimension separate from our own.  With the help of a few others who have been trapped over the years, the protagonist must try to find his way out of this dimension and escape the depraved Duke of Shadows.

This may sound like an intriguing story premise; it is unfortunately left to languish as the focus of the game placed solely on solving puzzles, not telling a story. With a story that is barely up to snuff with its Flash counterparts, Shifting World’s barely explored storyline reeks of missed potential, instead settling on a bland setting in a blander world.

Visuals & Audio:
Shifting World’s gimmick is the fact that the player can shift the world from black to white and change the area around him. As such, the only colors that players are presented with are black and white throughout the entire game, even in character portraits. While this follows the style of the flash versions of the game, even the blood that would appear when the player died due to spikes was removed for some odd reason. 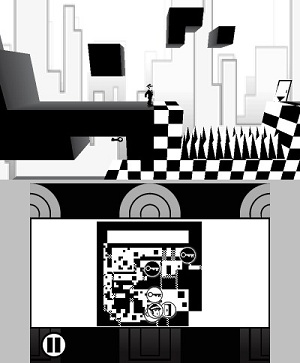 Each level is designed well enough, though the same repetitive coloration can be tedious and dull. To top it off, the protagonist’s body appears pixelated and jagged, a strange choice for a game with so little visual power anywhere else. The lack of coloration or detail in the worlds also makes the 3DS’ 3D capabilities seem for naught. While the forefront world may receive a slight depth increase, the difference is negligible and will likely cause mild headaches from the simple black, white and gray color scheme.

While the visuals may be somewhat varied from one level to the next, gamers better be ready to listen to the same background music over and over again without end. Those who like jazz may appreciate the song, but nearly everyone else will be more interested in playing the game with no sound on rather than listening to the repetitive music.

Gameplay:
This strange alternate dimension that the protagonist has been trapped in contains a unique feature. The man now has the ability to shift the world. The basis of Shifting World is to progress through each stage and make it to the room’s exit door. While it may sound easy, there are a number of obstacles in your way such as locked areas, switches, keys and more. At its core the title is a simple puzzle platformer with a unique world shifting mechanic. 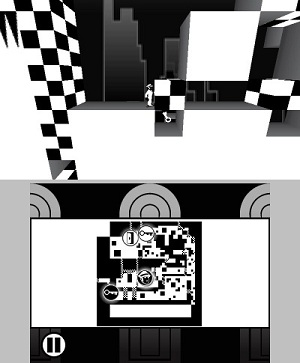 When the player uses the shift ability the world will become inverted, allowing the player to traverse previously unreachable areas. As the player shifts worlds the forefront will change from black to white and vice versa. The mechanic itself works well and offers a unique challenge that many other puzzle games won’t offer as players must use this shifting ability to reach many objects needed to complete a stage, such as the aforementioned keys to unlock gated areas. This is especially true once the player obtains the Layer Shifting ability which can change the world’s perspective from 3D to 2D and vice versa.

However making simple jumps and traversing the strange and puzzling world of this new dimension isn’t risk free. In fact, there are numerous spikes at the bottom of pitfalls which will ultimately be the doom of most players quite often.  These spikes are a signature feature from past Shift games, though as I mentioned earlier, any sign of blood has been removed from the game so whenever the player simply touches these spikes they are reset back to the beginning of that stage, forcing you to start over. 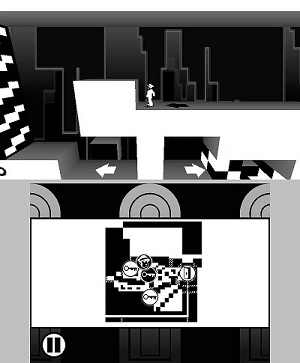 While these spikes add an extra layer of challenge as you avoid potential death, they feel slightly out of place in Shifting World. Being a puzzle game, there is no life system or even a timer, meaning that gamers can die as many times as they need to until they figure out the exact way to clear each stage. All the inclusion of these spikes does is increase the amount of time the player will need to take to finish the 60+ levels included in the game.

The risk of these spikes is only further increased by the fact that the top viewing screen where players will spend most of their time looking is zoomed very tightly on the main character. This means that you will be hard pressed to see anything not immediately by your character. Ironically, this problem is “shifted” in the bottom screen as the map is usually very compressed which not only degrades its visual quality but also the ease of use. This is quite a shame as the levels are impressively designed and rather large and an adequate map system would have come in quite handy.

Overall:
Shifting World isn’t a bad little game by any means, as it offers a decent amount of levels for puzzle lovers to explore and spend their time on. However even with Shifting World’s unique shifting mechanic, the strange fact that the game was given a full retail release costing $29.99 is a significant detriment as everything else about the title reeks of an eShop release. Fans of the Shift series will most likely be eager to pick up the title to experience the series’ newest release, however everyone else may wish to steer clear of a title that would have been better served with a much cheaper price tag and better use of the 3DS’ capabilities.