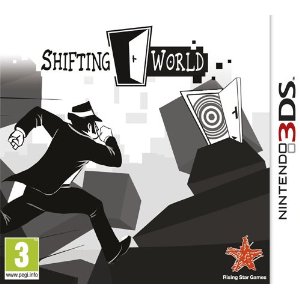 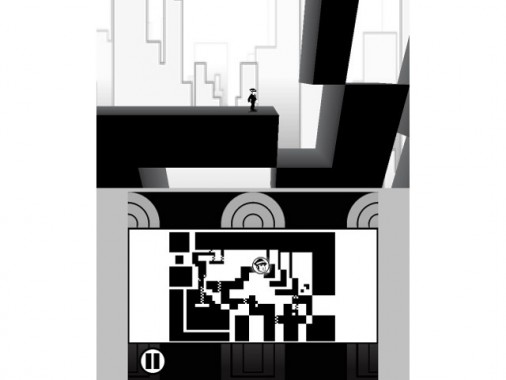 Overview:
Alongside the review game for Shifting World came a set of drink placeholders, each with a different optical illusion. I’ve always had a liking for optical illusions and the way they can play with your mind, so naturally I hoped this meant there’d be some mind-boggling things to be seen in Shifting World – aside from the 3DS’s dizzying 3D effect, that is. Sadly, there’s not much to speak of in the way of optical illusions, although what did present itself was a simple yet effective ‘Shift’ mechanic linked to the black and white visuals.

Story:
You’ve got to love the abruptness of Shifting World’s story. You receive a strange letter, an invitation from the ‘Duke of Shadows’. You follow the instructions to the specified address, only to be whisked into a parallel dimension when you open the front door. Little more than two panels of a comic strip, three boxes of text and then you’re sent on your merry way to get on with the game. While there’s no reason to want for anything more detailed, it’s just one of the many aspects of the game padded out to try to fill the boots of a retail release with a flash game. 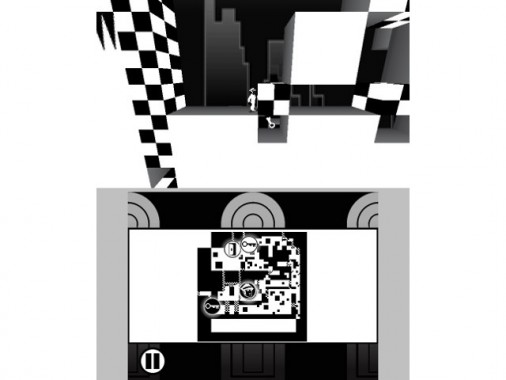 Gameplay:
As the 3DS debut of what was originally a free to play web browser game, you can sense Shifting World felt the need to step it up with this retail offering. It was now to be considered a ‘proper’ game, so it required the sounds, visuals and mechanics to back that up. But along the way it lost something – namely the simplicity that made it good in the first place. Although it’s true most wouldn’t be satisfied if it wasn’t spruced up a bit for the 3DS, I can’t help but feel the developers have gone about the upgrade in the wrong way.

To call it ‘Shifting World’ is to describe the mechanics pretty accurately, as the world shifts around you when you use this power. Up becomes down (the level is rotated 180 degrees), and black becomes white (everything is inverted so air becomes floor and vice versa). There’s even some movement using its new three-dimensional plane which the original shift games didn’t have to make use of. However, this twisting and turning isn’t so much mind-bending as it is disorientating. It’s often a case of walking until you can’t walk any further, then using the shift power to see what that does.

Although you do get to grips with the shift system after a little while, you never fully feel in control or know exactly where you’re going, primarily due to changes made for the 3DS version. On the top screen you get a rather zoomed in view of the level, which fails to give a sense of the wider goal of the level and where you should ultimately be heading; this is the job of the mini-map crammed onto the bottom screen. But, with the shape shifting and the tiny icons, it proves too small for its purpose. 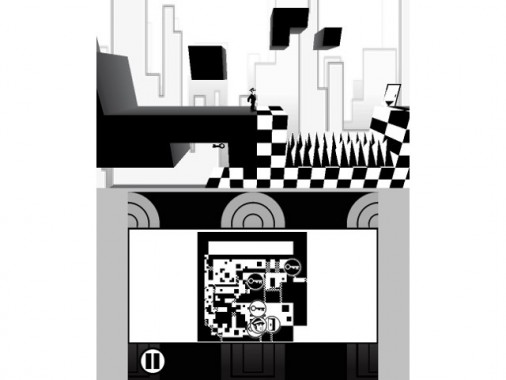 There are 7 worlds of puzzle-platforming, each broken down into levels. While the scenery doesn’t deviate much from black and white blocks in this twisted, lonely alternate dimension, new puzzle elements are gradually introduced which you must navigate through using correct movement and use of the shift power. Also introduced are dangers, to challenge your platforming in addition to your mind.

Both new gimmicks and increased peril are to be expected as measures to up the difficulty as you progress. However, due to a hard to interpret mini-map, misleading arrows and ill-conceived platformingm these measures pose more of a challenge than I expect was intended. Making the puzzling any deeper while the confusing navigational aids remain can lead you to become stuck in an irritating loop with no hope but to restart and see if you fare any better. Dangers like spikes, on the other hand, are all the more frustrating because it’s easy enough to fall victim to these through little fault of your own due to unresponsive jumping controls. The idea behind puzzles which have you moving around and manipulating the world in order to find a way through is sound, but movement around the level is laboured. 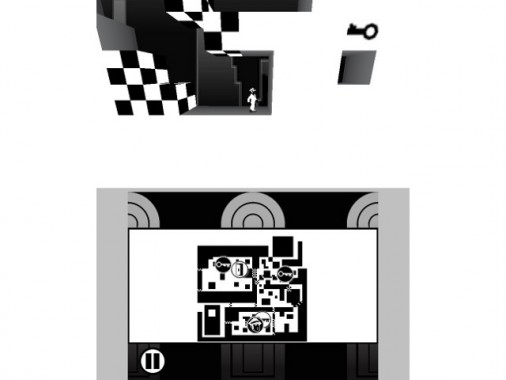 Visuals & Audio:
While some problems arise through the close-up view of the level that accompanies the new 3D graphics, the audio proves less problematic. As well as a couple of sound effects to reflect in-game actions there’s music which is in keeping with the style of the game, with a dash of the era it has tried to base itself on, a hint of solitaire menu music, and a repetitive loop to drive you up the wall if the puzzles don’t.

Overall:
The two pieces in Shifting World’s jigsaw are platforming and puzzles. Unfortunately, it can’t be complete if one is present without the other, meaning as clever as the shift puzzle mechanic is, the sub-standard platforming as well as a number of niggles awoken by the transition to 3DS mean it doesn’t amount to anything special.