According to many, the world is black and white.  There are no gray areas.  But, what if you didn’t have to choose between them.   Perhaps, you could traverse the gap and effortlessly move between the expanse of differing views.   Of course, due caution is necessary, as just like in life, spikes of pain exist and you are always only one step away from the the depths of an excruciating death. 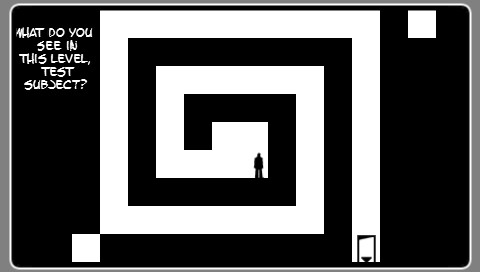 SHIFT Extended continues from where its PC predecessor left off.  You are Test Subject 12378.   Much like Portal, you are trapped in varying rooms and given instructions that will lead you to success in the puzzles that await.  Press the “X” button to jump.  Spikes will kill you.   This collectible will affect the environment in this way and so forth.  Oh, and pressing the “Left” or “Right” triggers will turn the world upside down and teleport you to the other side. For example, if you have a maze, it is as if the maze part was drawn on white piece of paper.   Therefore, if you are standing on the maze, you can shift between the white backgrounds and the black ink of the drawing.   However, the collectibles will let you unlock pieces, extend portions of the drawing and let you solve the puzzle.  Or, a checkered piece in the game will block your progress and you must find a way around.   Success is determined by reaching the exit; the score you receive is based on the regular requirements of speed, moves taken and lives used.

The unique idea is well executed and is very addictive.  Being able to control your environments in such an effective and simple way is fun.   The game is very easy to understand, and it will also test your spatial thinking abilities.  Although I found the game amazing in many ways, some may be turned off by the fact that virtually every room merely requires you to find the collectibles, follow the route and finish each room in under a few minutes.   I personally found the game rewarding, in a Pavlovian like fashion, but fairly simple.   Sure, I did die a few times, but I was able to fly through the first 30 levels in under an hour.  But, the game does progressively get harder.   And with a 120 levels in this extended version of the game, versus 60 in the original game, this game will keep you entertained at an enjoyable price. 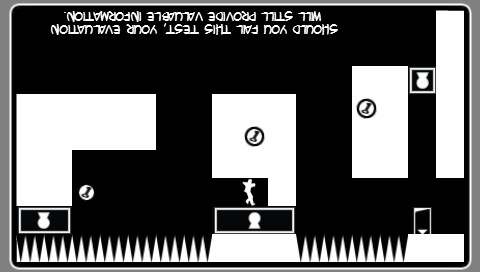 Audio in the game is well done.  The game is devoid of any type of speech.  This makes you feel like a test subject all the more.  Occasionally, text boxes will pop up a witty saying, but otherwise, I felt like an abandoned person, sent out to survive a forgotten experiment.  In other words, I felt that the game did a very good job at putting the player in the game.  The soundtrack reminds me of  the Pink Panther or a lighthearted story.   That is to say, the soundtrack is not suspenseful, but more of like a mysterious, playful tune that is only interrupted by the occasional audio cue or death.

Speaking of death, that is the only time color is involved in the game.  The graphics are very basic, harkening back to the game’s Flash roots.   But when you do die, your bloody carcass sprays red.  Thankfully, you are very quickly respawned.  In fact, there are hardly any load times at all in the game.

The graphics may seem very basic.  They let you really focus on the game though.   And they add a symbolic meaning to the game as well.  Is life just one big experiment?   Is there more to life than just the black and white justice we conceive of?  Really, maybe simpleness is best. 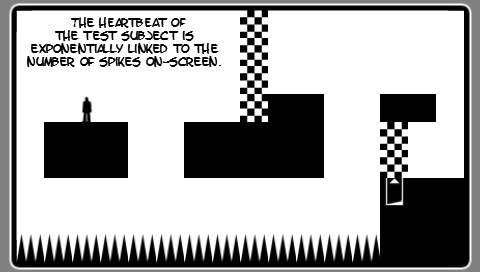 SHIFT Extended is a great game.  I kept playing and playing the game.  Since the game is Playstation Mini, it is very attractively priced.  Although it may be a little simple, the engaging concept will keep you keep coming back after you have finished the main part of the game.  And there are always high scores to chase.  Unfortunately, that Mini price also keeps the leaderboard options squarely on the local and, not online, side of the fence.

In conclusion, SHIFT Extended has a great graphical style.  A repetitive soundtrack is a little stale after a bit, but it does keep you entertained most of the time.  Awesome gameplay takes the puzzle genre to new heights.  If you are the type to be nauseated easily, you may want to hold off though.  The world will constantly spin, and after playing too late at night, I did get a little queasy.  The game even makes a joke about that.

Ultimately, this game is ray of light in the darkness.  A speck of incredibleness in an overcrowded sea of indie blandness.

I give SHIFT Extended: