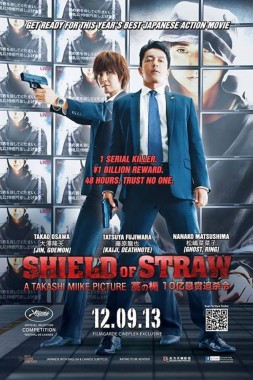 Japanese cinema is a wonderful and sometimes beautiful thing that, although similar to the Western style of film making, can be something entirely different and in some cases infinitely better but, like all forms of media, there is the good and the bad and you really can never have one without the other. Takashi Miike is a very popular Japanese film director who is famous for a great deal of movies like Crows Zero One and Two, the Ace Attorney movie, Ichi The Killer, and many more. His latest movie, Shield Of Straw, is a film full of action, thrills and a great deal of symbolism and conflicting standpoints that, while long and oddly paced, makes for an incredible ride that really screams “Takashi Miike!”. 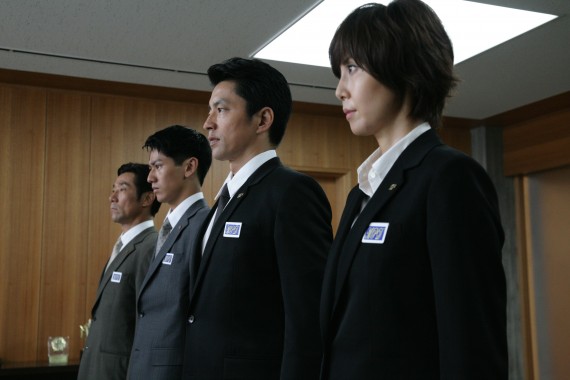 Shield Of Straw follows the story of a small group of highly-trained police officers who must escort and protect a child-molester and murderer named Kunihide Kiyomaru who is played by Tatsuya Fujiwara which you may know from films like Battle Royale or the live-action Death Note movies. Kiyomaru was a repeat offender, a sick man who never learned his lesson and really never made any attempt to repent or repay for the crimes he had committed. The granddaughter of a well-known billionaire, Ninagawa, was unfortunately a victim of Kiyomaru, thankfully he was convicted and sent to prison for many years but this just wasn’t enough for the grieving grandfather, he wanted Kiyomaru to suffer, suffer like his granddaughter did.

Skip ahead many years to the day Kiyomaru is released from prison, the newspaper goes out all around Tokyo with the mans face printed over every front page, the paper reads something along the lines of “The person who finds and kills Kiyomaru will be rewarded with One Billion Yen”, that isn’t verbatim but I’m going to assume you get the idea. Now despite Ninagawa giving a distinct rule that Kiyomaru must only be killed legally, the only two legal ways of killing people are if done through acts of war or the death penalty is given out by a governing legal entity, most characters totally disregard these two rules and it really only makes an appearance closest to the end. 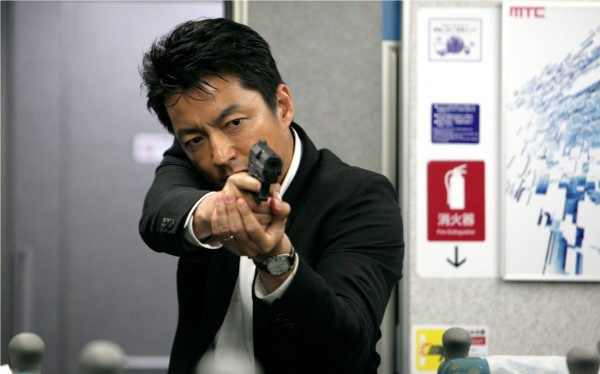 All of Japan are after this man and the small task force must protect him since he is a Japanese citizen and for all intents and purposes he has done his time and is now an active member of society, the police officers lead by Lieutenant Kazuki Mekari must now transport this man to Tokyo where he will be taken into custody and ultimately into safety considering what they assume is about to go down, whatever it is the higher ups assumed would happen ends up being a great deal worse now that all of Japan is out to kill Kiyomaru. The film deals with deception a lot throughout the movie, every person that comes into contact with Kiyomaru has a motive to kill him whether it be strictly for the money or the hate they have for this man in general.

Shield Of Straw revolves around the theme of backstabbing alongside the conflict between ideals and decisions, the main crew are constantly questioning each other both about their dedication to the job and on whether or not protecting this man will ultimately do any good, they’re great questions to ask in-film because I can imagine the audience asking themselves the same thing. While the pacing of the story does drag on near the end it is still a very good one indeed and deserves merit for what it put forth to the audience and the way that, in end, it actually kept us in our seats. While there is a great deal of action, it’s spread throughout the film nicely and I feel as though it didn’t need much more because it was a movie will of questions and answers which cannot be put across through simple fighting. 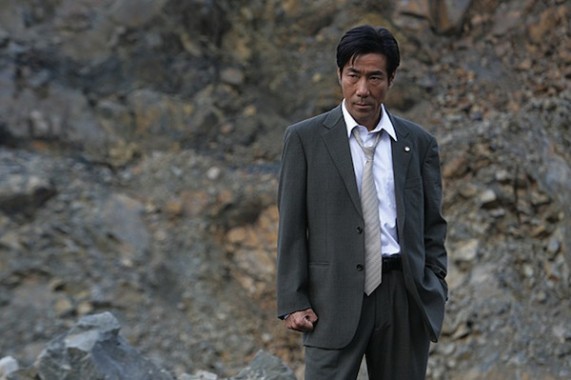 I have to admit; it DOES get a little convoluted at times which did put a little pressure on me to be fully sucked into the film, luckily the characters have really in-depth and very good back stories that make you feel for them as well as making you understand why it is they say certain things and why it is they do certain things. Shielf Of Straw is basically a series of mistakes and fixing those mistakes only to make more mistakes. I’m still speaking of the story here, not the movie in general.

Mekari will do anything to complete his mission despite the fact that it goes against everything he stands for, through death, destruction and carnage he carries on, with a broken spirit he fights through because, in end, he knows that his conscience will be clean and that, despite what the majority believe, he has done the right thing. He also happens to have the best and most in-depth back story out of all the main cast and it is very interesting to witness throughout the film. If it was paced a little bit better and maybe a few key aspects were fleshed out more, the story would have been absolutely perfect. 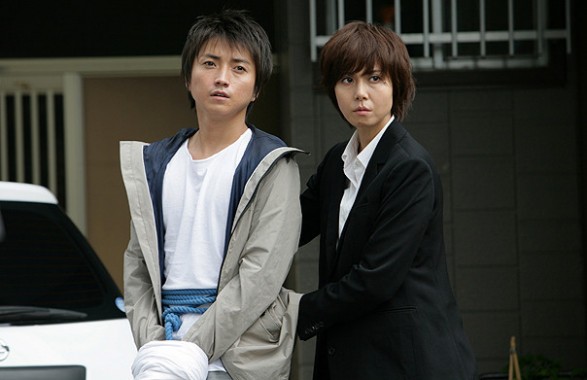 Shield Of Straw was developed by a masterful director so as you can imagine it was full of beautiful shots and haunting angles that really allow you to get a feel for the situations you’re viewing. Slow, panning shots and hard cuts were incredibly present throughout the whole film and they were used incredibly well. Despite only really having six main cast members all together at one the movie had a lot of these panning shots and they were done very well because the six were constantly battling the masses, whether it be a small army of SWAT officers or a panicked crowd scurrying for their lives, the main team were always battling something bigger than them, that’s where this panning and sweeping shots really made their mark, going from six scared faces to a deadly crowd of emotionless helmets and battle gear is truly a terrifying thing to witness and it was done perfectly.

Having hard cuts in intense and epic situations make for an incredible cliffhanger most of the time but in Shield Of Straw I found that it did something different, something almost Reservoir Dogs-like, the way they cut and the scenes in which they did led you to wonder exactly what happened in that gap between then and now and the fact that you never see it nor do they ever mention it leaves enough to the imagination that you speculate from then on. Shots that make you think. Just incredible. 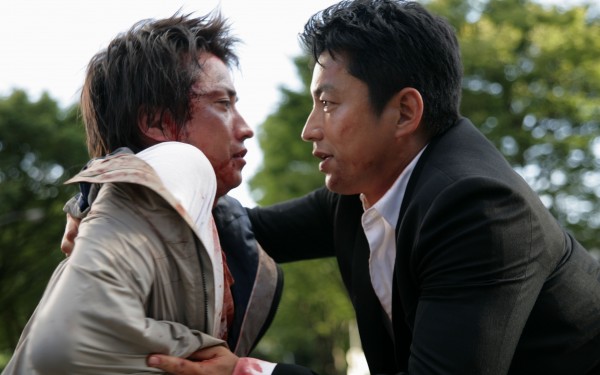 Above all else in this movie I felt as though the lack of music was the most outstanding audio aspect. There WAS music throughout, during intense situation and what not but, as mentioned, it was the lack of music in certain scenes that really allowed them to set in. The sound of an incoming storm, the wind in trees, the clinging of wind chimes as the main protagonist and antagonist face off is something so fascinating, it hits you a fair bit and the use of it throughout the film is absolutely fantastic to say the least. I’m going to place acting in the audio section simply because of the emotion in the actors and actresses voices throughout the movie.

To see a man who has stayed mostly quiet during the film scream in fear, sadness, aggression and frustration is something that, much like those calm yet tension-filled scenes, really hits you and sticks with you afterwards. The fact that I’m actively imagining specific scenes as I’m writing this review is a true testament to that. Clearly these actors were perfect for their roles because their portrayal of such conflicting characters were almost perfect in so many ways and I really couldn’t imagine an American actor play a role this good, whether not I’m bumping it up to be more than it is that’s your job to decide but I have to give credit when credit is due and these actors really made their bones. 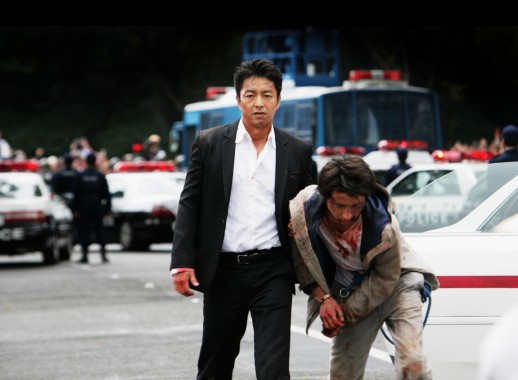 It is simply a fantastic movie that is just lacking certain things, not big things but definitely things that are noticeable and questioned afterwards which leads to the doubting of the movie and everything it has to offer which is terrible but it has to be outlined. Not every movie can be perfect, not every movie is perfect, this movie isn’t perfect but it is a brilliant film full of hard-hitting questions and even harder-hitting actors and actresses.

If you’re more action-inclined than this movie truly isn’t for you at all, thriller fans will enjoy it as well as mystery fans but the true audience for this movie are those who question, have strong moral opinions and ideals, this is what the movie revolves around and thrives on and it will really resonate with you if you work the way it does. Try not to mind the odd pacing and the way it drags on as well as certain little aspects not being outlined, while they may be annoying they are still thought-provoking and, had those little things been worked out, it would have been an absolutely perfect movie. All in all it’s still a great film and one that any Takeshi Miike fan should watch.