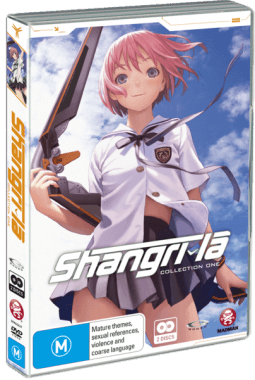 Overview:
Everyone has issues in their life and the world has plenty of problems in and of itself.  To help people escape from worrying about every day issues various media forms have thrived on offering viewers and users a chance to escape into a world unlike their own, usually with either fantastical elements that are impossible in our reality.

However every so often there comes a title that takes these real world issues and puts them to the forefront. One such anime is the sci-fi anime Shangri-La. Originally created as a light novel back in 2004, the books received an anime adaptation in 2009 courtesy of Gonzo. Fast forward three years and we have an intriguing anime unlike what fans are usually treated to in North America. Does Shangri-La offer an enjoyable and interesting viewing experience or should it be cast aside?

Story:
Many years in the future the world is undergoing severe levels of global warming and an international committee has decided that the only way to reduce the CO2 emissions that the world is making is to shift to an economy that involves trading carbon instead of money. After the shift to carbon trading and carbon taxes have been levied against every country in the world, Japan suffers a terrible earthquake which manages to utterly destroy parts of the country. 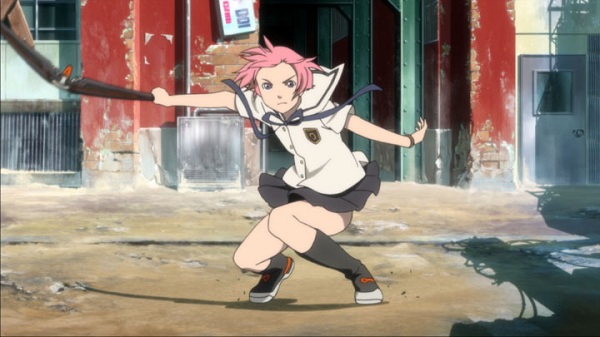 With the carbon tax preventing them from rebuilding effectively, Tokyo is left to change into a jungle city that will help absorb some of the carbon dioxide from the world while the rest of Japan is made into one of the poorest countries in the entire world. However a project has been organized to rebuild Tokyo and create a new government in the fallen nation.

The members of the organization call their plan Project Atlas. While Project Atlas may be a saving grace for the Japanese public, there is one small issue with this plan… the fact that only three and a half million people can enter the revitalized city while the rest of the citizens must be left outside in the vicious jungles teeming with danger and hardship. This creates an immediate class separation between the elites living in Atlas and the refugees in the jungle, which happens to be a rather interesting plot point given the way that protests in North America have been occurring between the 99% and 1% over the past year. 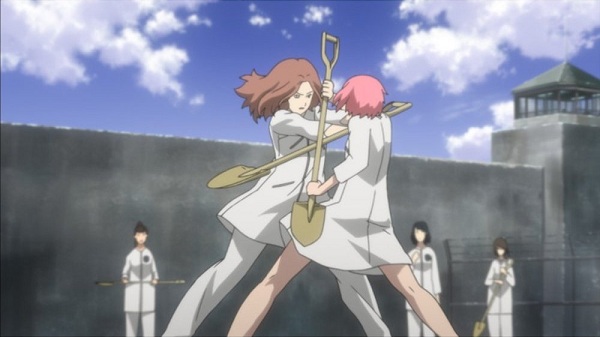 Our story follows a teenage girl named Kuniko Hojo who has just been let loose from a girls detention center in Duomo where she was kept for the last two years. You see, Kuniko happens to be the granddaughter of the leader of Metal Age, an anti-government organization who is trying to take down the company running the Atlas project and open up the city to everyone.  Shortly after her release she is told that she is going to become the new leader of Metal Age when her grandmother Nagiko Hojo hands down the reigns.

When the Atlas Security Corps suddenly attack Duomo while blaming them for an unknown incident, Kuniko jumps at the chance to fight against the Atlas forces once again. However when Kuniko uses her signature boomerang weapon to attack the leader of the forces, a man named Kunihito Kusanagi, he blocks her attack with a dagger. For an unknown reason, when their weapons hit each other strange black dots appear above Duomo and rain destruction upon everyone. With dark forces moving within Atlas and the mysterious resonations of Kunihito and Kuniko’s weapons, many questions are left to the viewer. 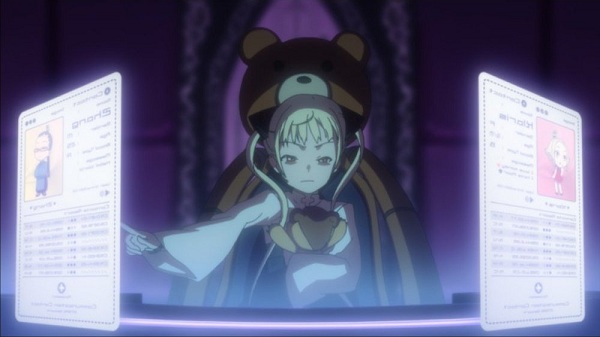 It is worth noting that the first half of Shangri-La often spends most of its time introducing characters from both factions and introducing a number of plot points. This does create a very complex storyline which requires the viewer to pay close attention to what is happening or else they will easily lose track of what is happening at any given time. Most of the attention in Part 1 is paid to Kuniko and her friends as they try to survive in the jungle that is now Tokyo.

Shangri-La Part 1 does leave off on a decent cliffhanger, though considering Part 2 was released alongside the first half of the series, those who are eager to continue watching the series won’t have to wait at all. While a few questions are answered in Part 1, most of the plot seems to be building up to large events in the second half of the series. It is already evident however that the story so far does tend to feel a bit heavy handed, like they are attempting to force too many plotlines together within a twenty four episode series.

Visuals:
It is quite obvious from the get-go that a lot of attention has been paid to Shangri-La’s environment and backgrounds. With the story taking place in a dystopian future where Japan has been devastated by earthquakes and abandoned by most of the world, the stark contrasts between the revitalized city of Atlas and Duomo are a sight to behold. 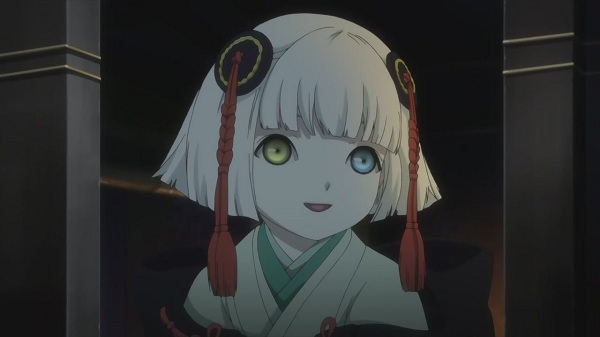 Unfortunately the same cannot quite be said for the series’ action animation. While the characters themselves are detailed well enough and given great animation, whenever the series begins to bring heavy action into the picture the quality of the animation as a whole falls slightly, though not enough to ruin the sequences, they are often noticeable.

Audio:
Shangri-La: Part 1, and therefore Part 2 which was released alongside this one, has been given a full English dub by FUNimation. For those who prefer the Japanese dub you will be comforted to know that this release does contain both audio tracks. The English voice work has been handled well for the most part, though not quite as well as viewers have come to expect from FUNimation’s releases. It is worth noting that kudos should be given to Kent Williams as his character Momoko is certainly one that isn’t encountered, let alone portrayed in English, in anime often.

The soundtrack of the first half of Shangri-La is a bit hit and miss with when it comes to the background music. While Shangri-La contains some rather impressive musical tracks it is also full of rather bland and expected music that simply doesn’t add much to the experience as a whole. As for the opening and closing songs, they are quite entertaining and suitable sounding for the series. 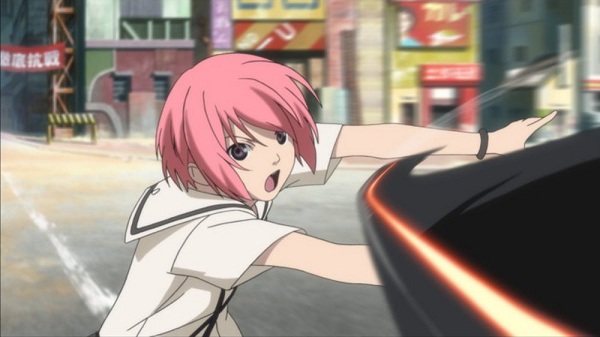 The opening song “Kimi Shinitamou Koto NaKare” by popular artist May’n is your standard fast J-Pop song set to get the viewer eager for the show while the main ending song “Hajimari no Asa ni Hikari Are” by Midori is calming and slow-paced. It is worth noting that the second ending theme for the series does appear in Part 1 and is also by Midori. “Tsuki ni Kakuseshi Chou no Yume” features the same slow pace and tone as Asa ni Hikari, though the difference between the lyrics of the songs is noticeable and appreciated for those who enjoy anime styled music.

Extras:
With the release of Shangri-La Part 1, the package comes with an actual chipboard case that will allow the buyer to store both Part 1 and Part 2 together in one package, with the chipboard case featuring some impressive artwork. There are also plenty of bonus features besides your standard inclusions, which are trailers for past and upcoming FUNimation releases, a clean version of the opening song and both clean ending songs. One of these bonus features is a short mock promo video for a show called “Magical Gina the Akiba Fairy.” The video itself is still in Japanese but is still entertaining enough as a minor diversion from the main series.

Besides those inclusions there are also two commentaries included with this release for episodes 1 and 10. Both of these commentaries are packed full of people, with Tyler Walker, the ADR Director and Line Producer, running both commentaries. In episode 1 he is joined by Kent Williams, the voice of Momoko, Lindsay Seidel, the voice of Kuniko, and Austin Tindel who happens to be the voice of Kunihito. Episode 1’s commentary is entertaining enough, especially with the fact that Kent voiced the aforementioned transsexual character Momoko. 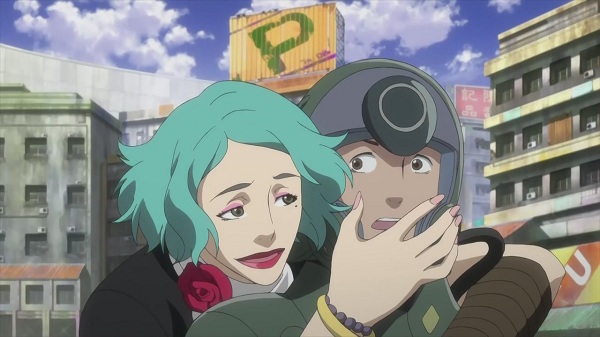 Episode 10’s commentary features Tyler Walker joined by Anastasia Munoz the voice of Sayoko, Apphia Yu who handles the voice of Mikuni, and Randy Perlman the voice of Miko. This commentary is not quite as entertaining as the first, though still mildly enjoyable, and it is worth noting that these commentaries should be watched after viewing the first half is over, as it can spoil parts of future episodes.

Overall:
Shangri-La Part 1 introduces us to a world with plenty of issues hauntingly similar to what we’ve experienced in real life. Not only is the premise of global warming weighing on the world now, with the hottest summer in North America ever, but the war between Atlas and Metal Age bears a striking resemblance to recent protests in the US. To make things even more eerie, two years after the anime aired Japan was hit by a devastating earthquake and tsunami.

As for the series itself, the complex storyline and various connections the plot has to real life events make for an enjoyable viewing experience. While only Part 1 has been released so far, it is fairly evident that the complex web of storylines spun in Shangri-La may quickly turn into a tangled storyline full of plot holes. Still, Shangri-La Part 1 offers engaging characters unlike what most anime viewers are accustomed to while also offering a compelling, albeit convoluted, story.