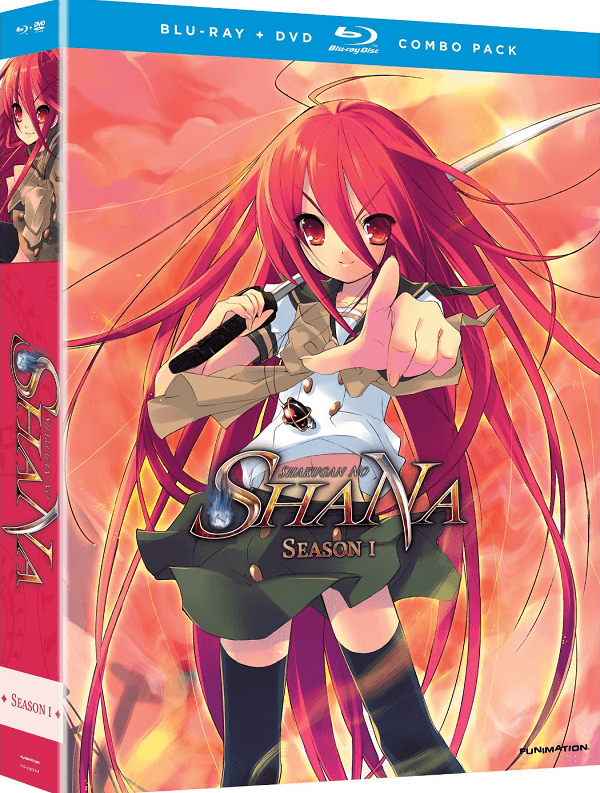 Overview:
Many anime fans have likely heard of the series Shakugan no Shana before and may even own a copy of the anime in their household already thanks to the fact that this anime which originally was created by JC Staff back in 2005 has been re-released a few times over the years on DVD, once through the now defunct Geneon Entertainment and twice through FUNimation.

Story:
Shakugan no Shana’s storyline takes placing during the modern era where a boy named Yuji Sakai has been attending high school just like everyone else. He has a crush on another girl in his class but besides that, his life has been your standard affair. However that all changes one day when suddenly time around him pauses and a horrific creature appears out of nowhere, eating everyone around him and destroying the area. 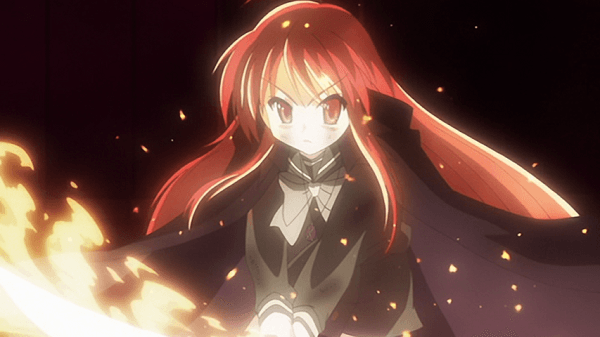 Suddenly, a small young woman appears with flame-red hair and eyes appears and obliterates the creature. However during the battle, Yuji was horribly injured but to his surprise, he isn’t even bleeding. This young woman explains to him that these creatures, called Denizens, are members of another realm called the Crimson Realm and they feed off the life energy of the normal world. Whenever one of these Denizens appear and slaughter people, the people tasked with slaying them, Flame Hazes, must replace what was taken from the world in an effort to keep the universe in balance.

However the only way they can do this is for a Flame Haze to recreate the bodies of the people who have been killed as Torches, people who have been created from the remnants of humans who will eventually fade away and be forgotten like they never existed at all. The reason that Yuji’s isn’t even in dire need of help is because he too is a Torch, a person whose entire existence was devoured. 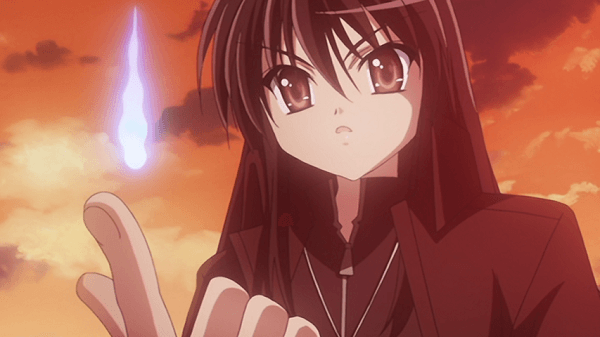 However, there are special instances where when a Torch is created; a special treasure is created within them. Yuji happens to have had the rarest treasure appear within him and it not only gives him free movement within the frozen time-space, but also the ability to constantly refill his life energy at the stroke of midnight every night, allowing him to never disappear and potentially live forever.

While trying to learn more about the Torchs and the Crimson Realm he slowly becomes friendly with this young Flame Haze who he names Shana. In an effort to monitor Yuji and his special treasure, Shana takes over the role of a young girl in his class whose torch already went out. With Shana close at hand, Yuji quickly is submersed in a world he’s never known, one where human life and identity is challenged every day. To make things worse, when knowledge about Yuji’s treasure is spread around, dark and powerful forces begin to move to try and secure it. Can Shana protect Yuji and all those around him? 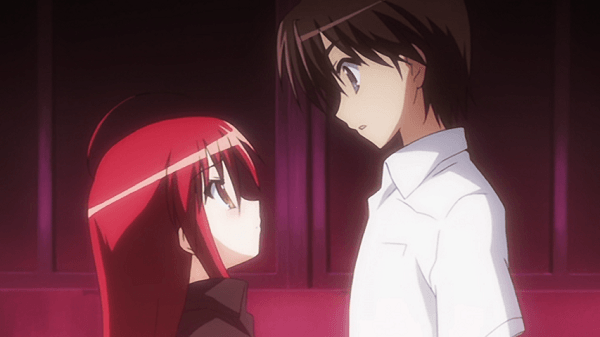 The first season of Shakugan no Shana runs at twenty four episodes and considering the fact that it was based off of light novels in the first place, the story is told through a number of multiple episode story arcs where various Denizens and other Flame Hazes come to try and kill Yuji and those around him. Thankfully this setup avoids feeling formulaic with manageable pacing and enemies with a wide range of abilities.

As for the cast themselves, viewers are given a treat in the form of Shana herself. While Yuji soon comes to grips with the fact that he is nothing more than a replacement for a person whose existence was already devoured, Shana is introduced to viewers as a practical blank slate. This means that throughout the course of the series viewers get to watch an emotionally stunted Shana slowly develop feelings for those around her as well as a growing attachment to Yuji. 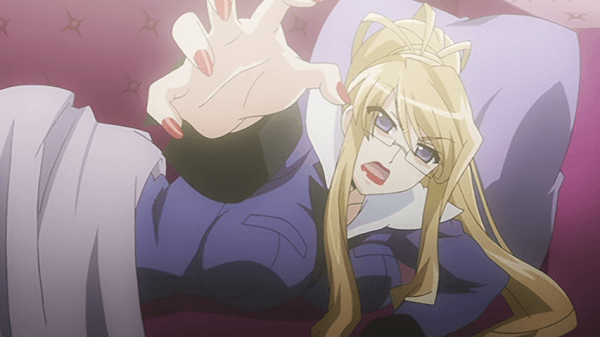 These two main characters are accented well by an enjoyable cast of side-characters, including a later love-rival for Shana who forces her to start truly thinking about Yuji in a way she never thought of before. Add in another Flame Haze who happens to drown herself in alcohol and her partner, a book with a biting sense of humor and there are still plenty of laughs to be had in a series which focuses heavily on action and drama.

Visuals:
It is worth noting for those who pick up Shakugan no Shana’s first season with this release, that the first season of the show actually aired back in the beginning of 2006 so that means that most animation techniques used are over six years old at this point in time, meaning some characters are designed rather blandly outside of the main cast. It is also worth noting that the quality of the animation does take a hit during non-action scenes, plus with the series taking a jump to Blu-ray the quality isn’t quite what one would expect, though it is still a mild upgrade from the original DVD releases. 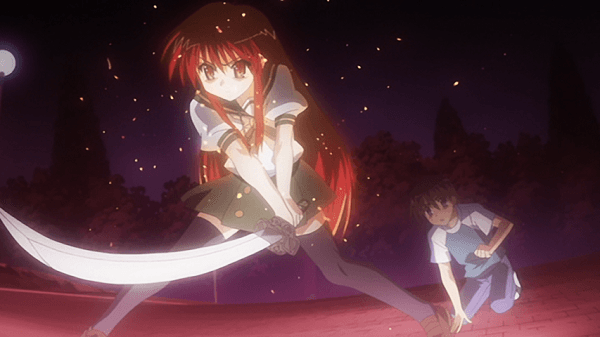 As for the action scenes themselves the series is still a spitfire as far as quality goes. The animation viewers are presented is beautifully handled and fluid with lots of easy to follow attacks and realistic damage. It also really helps that the series makes an excellent use of atmosphere, with most action scenes given a red tint to match Shana’s flames and easy transitions to and from battles.

Audio:
As one would expect with a FUNimation release, Shakugan no Shana’s first season is being released with both the traditional Japanese dub as well as the English voice track originally handled by Geneon. Both of these tracks feature impressive voice actors, though fans of Japanese voice actors can note that Shana is voiced by Rie Kugimiya. Despite the stiff comparison however, Tabitha St. Germain who provides the English voice of Shana handles her character and personality quite nicely. 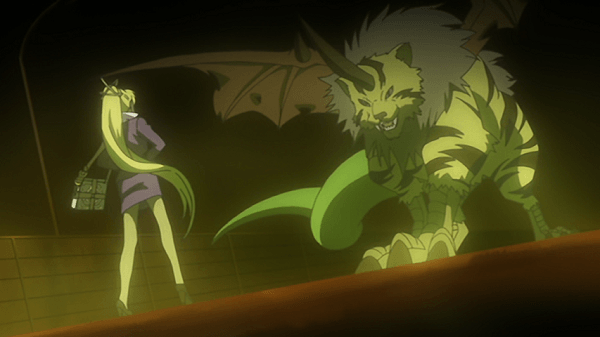 The first season’s soundtrack is well handled with appropriate background music that helps set the mood for most situations as well as enjoyable combat music. For the first season viewers are treated to two different opening songs, “Scarlet Color Sky” by Mami Kawada and “Being” by Kotko. Both of these opening themes share a similar tone and are enjoyable enough to listen to, though most viewers will likely skip over them after a few viewings.

As for closing songs, there are two present within the twenty four episodes of Season One and these are “A Girl will be born at Dawn” by Yoko Takahashi and “Crimson Calmness” by Yoko Ishida also share similar tones which are slower paced but are matched alongside fitting animation sequences that really help accentuate the tone of the music.

Extras:
While there are no interviews with the cast or commentaries, Shakugan no Shana’s first season does come with a number of bonus features, though a few of them are a bit standard. Viewers are given clean versions of the two opening songs as well as the two ending songs, though the full version of “Scarlet Color Sky” is played as a third ending which is also presented as clean and a few trailers for past and upcoming releases. 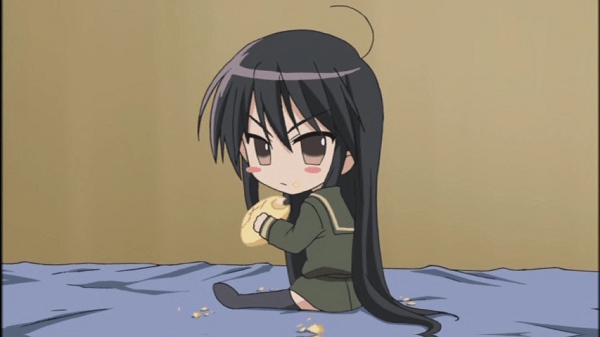 As far as non-standard bonuses go, there are three of them and each of them are presented in English. First there are the Naze Nanai Shana clips which are eight short videos which answer some questions concerning the possibly confusing terminology of the series, though most of it is explained comically. Also provided are the two Shakugan no Shana-Tan videos, with Shakugan no Shana-Tan Returns being the longer one. Both of these clips provide a comedic look at how some scenes in the season would look with a mini-chibified version of Shana as well as some out of character dialogue from the rest of the cast.

Overall:
Shakugan no Shana’s first season helps set some solid framework for the rest of the series to build itself around, with most of the characters introduced in these first twenty four episodes and their issues worked out. With our main heroine and her attempts to understand her new emotions playing out during many of the season’s key battles, viewers will quickly grow to like the pairing of Yuji and Shana.

Though the Blu-ray presentation isn’t quite as good as most would be expecting and the age of the series does show with some questionable visual quality, Shakugan no Shana Season One will leave viewers wanting to see what else is waiting for the likable cast of characters in the Crimson Realm.