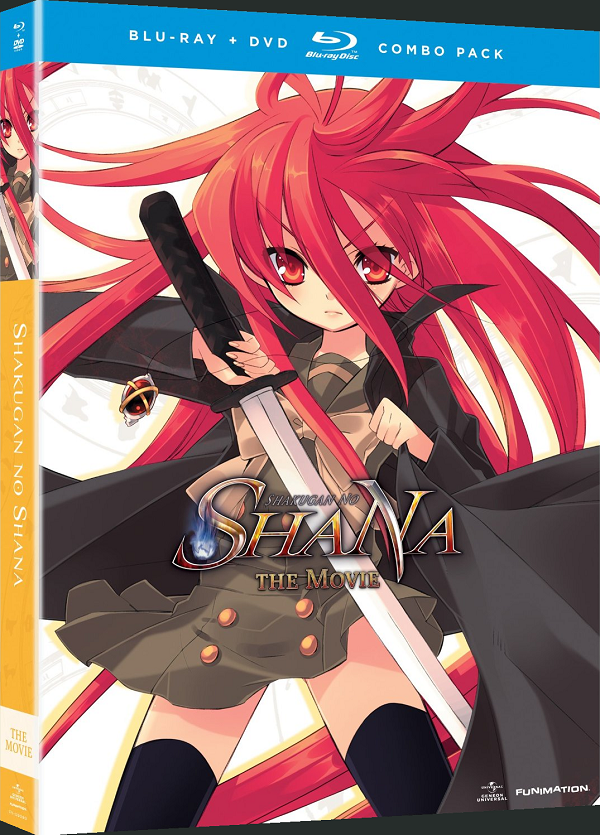 Overview:
Approaching a long running series can be a daunting task. Not only could there be hours’ worth of episodes to watch, but you also have to comprehend everything that is going on. As such, a series such as Shakugan no Shana, which has two twenty four episode seasons already translated into English, can be difficult to enter into.

However what if a movie was created to help compact events from the first season into only an hour and a half? Well you will have the Shakugan no Shana: Movie of course. The question is, does this movie serve as a great standalone piece or even an addition to the franchise? Let’s find out.

Story:
As mentioned in the overview, this Shakugan no Shana Movie serves as an introduction to the series and as such, I will first go over how a newcomer to the franchise would find the movie’s storyline as a whole. The movie follows the story of Yuji Sakai who is living an everyday Japanese high school life. However one day while he is out with a friend from school, the world around him suddenly freezes and a monstrous looking baby appears and starts devouring everything around him. 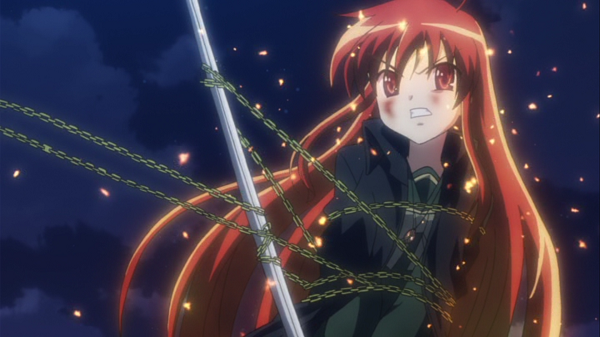 The baby and it’s accomplice notice that Yuji is still moving in this world of frozen victims and target him because he is a special type of person… a “Mystes.” Just as Yuji’s life seemed to be at an end, a fiery haired girl saves his life by defeating his attackers. This girl is named Shana and she is a “Flame Haze,” one who battles against these denizens of the crimson realm and prevents them from upsetting the balance of the world whenever they begin devouring living people for their power of existence.

Shana does this by replacing devoured humans with “Torches,” near-mindless beings that temporarily fill in for a lost life until it is no longer necessary. Yuji’s true shock comes when he finds out that he is one of these torches, but when news about his unique quality as a Mystes reaches the ears of a powerful Denizen with a wicked plan, Shana must fight to protect Yuji and the mysterious treasure he possesses. 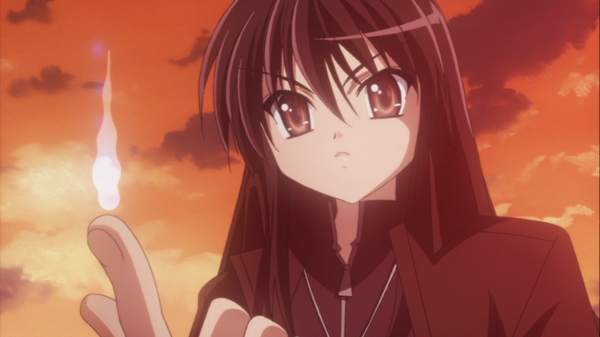 Now as a movie on its own, Shana does a decent job introducing the very basic elements of the storyline as there is some mild character development between Shana and Yuji, an introduction to a prominent ally and some story development. However as far as introducing newcomers to the series, it does a terrible job of things.

Most of this can be blamed on the fact that, with only an hour and a half to work with, the Shakugan no Shana movie has to trim so much fat that not only are plenty of character building and explaining moments left out, a few larger pieces of the story are left out entirely. As such, anyone who would feel like jumping into the Shana series from even the second half of the first season would feel completely if their only previous knowledge from the series was from this movie. 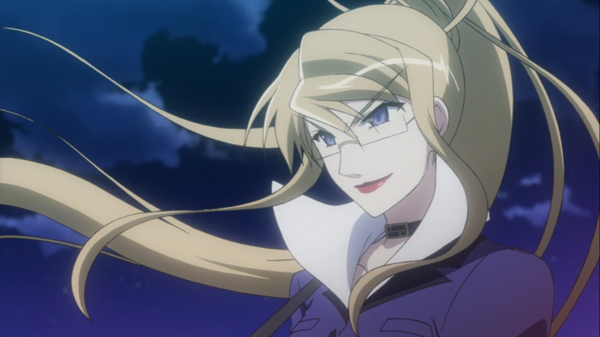 As for those who’ve seen the series before and are looking for maybe something a little more, the Shakugan no Shana Movie focuses completely on the first antagonist Friagne. While multiple dialogue sequences and battles have been repeated, around half of the series features new combat or story involving Friagne as he unleashes an arsenal of never before seen “Treasure Tools” and more ambition than before. 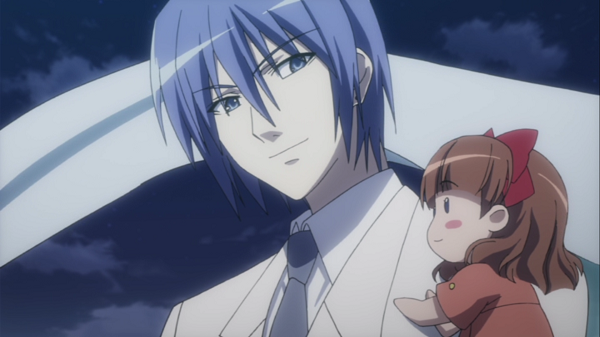 Ultimately the Shakugan no Shana movie may do an alright enough job as a standalone product as it features some mild character development and plenty of combat, but as a whole the movie fails to provide much of an introduction to the franchise and unless you happen to be a major fan of Friagne and his personality, Shana’s increased screen and combat time is the only saving grace for this movie’s storyline.

Visuals:
Considering the fact that this Shakugan no Shana: Movie is actually a retelling of part of the first anime season, it seems that J.C. Staff decided to be a bit lazy this time around. You see, as I mentioned before, a little under half of the Shana Movie actually features new content while everything else is a retelling of the same events just chopped down to a bare minimum. The reason that I mention that J.C. Staff took things easy is the fact that the old content is literally recycled footage taken from the original series, with no apparent touch ups whatsoever. 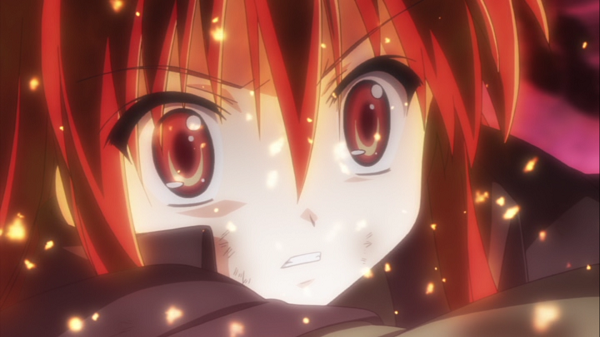 This wouldn’t be too noticeable, if it wasn’t for the fact that there are noticeable shifts in quality whenever a newly animated segment appears. Not only are the character designs sharper, the special effects in the battles are better designed. Considering the original series aired back in 2005 while the movie debuted in 2007, the overall visual presentation still leaves a lot to be desired, but the noticeable improvements between new and old segments leave the movie appearing inconsistent.

Audio:
One thing that is good about the Shakugan no Shana Movie, is that despite being a poor introduction to the series as a whole, newcomers may find themselves growing accustomed to the new voice work that was recorded for Shakugan no Shana Season 2 and so on. This is thanks to the fact that this movie features FUNimation’s new cast of voice actors and actresses. While Yuji’s voice actor Josh Grelle still doesn’t manage to fit into the role the best, he isn’t as noticeably out of place this time around and of course Cherami Leigh’s take on Shana continues to impress. Although this should go without saying, this movie also features the original Japanese voice track as well as FUNimation’s English dub. 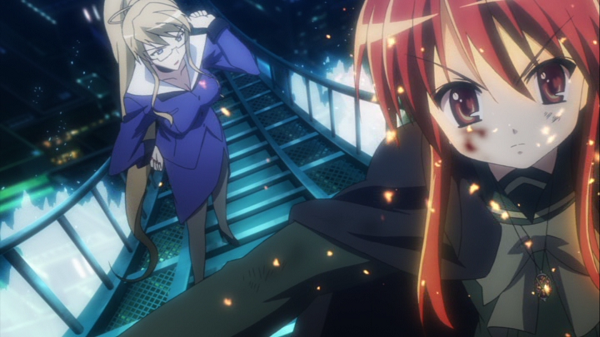 As far as background music goes, the Shakugan no Shana Movie features similar sounding, if not the same, music throughout the series but this isn’t too much of a detriment as each track usually fits well with the events occurring on screen. Being that this is a movie with limited run time, there is no inclusion of an opening or ending theme, though an appropriately emotional insert song is used during a dramatic moment, minus a decent sounding song that plays during the final credits.

Extras:
As far as bonus features go, the Shakugan no Shana Movie is unfortunately a bit sparse. Outside of your standard features such as the US trailer for the movie, trailers for other FUNimation products and the original Japanese promo videos and commercials, there are only two special features worth mentioning. These two being the Shakugan no Shana-Tan Theatrical Version and the Why? What? Shana! Ask Anything Question Box: Review Lesson. 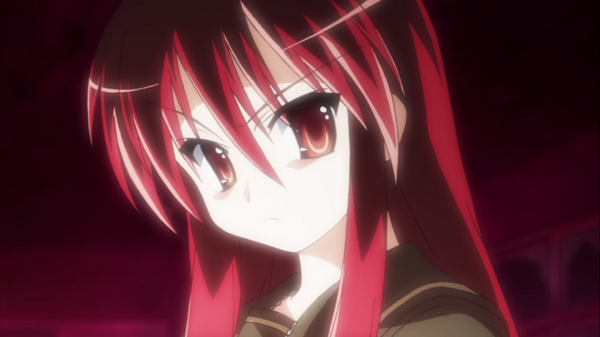 These two bonuses feature the original Japanese voice track only, which isn’t too much of a detriment thanks to Rie Kugimiya’s voice work as Shana. The review bonus feature is pretty much what it sounds like, a brief coverage over the basic theories and phrases within the show and seemed to air before the movie itself came out. Shakugan no Shana-Tan once again features a tiny chibi version of Shana performing various acts throughout the movie in her new small body, often with hilarious adjustments and cutaways to side-characters making small gags.

Overall:
While the Shakugan no Shana Movie unfortunately offers a barely acceptable presentation of the first half of the first season of Shakugan no Shana, the story it does manage to tell is at least passable thanks to some great combat sequences and decent character development between Shana and Yuji. Meaning newcomers can find a passable anime movie focused around supernatural powers and a mini-mystery. However the use of older footage and lack of introduction to most side-characters and aspects of the series leave it as a rather bare-bones intro to the Shana franchise which is passable only for its expanded Friagne combat sequences.