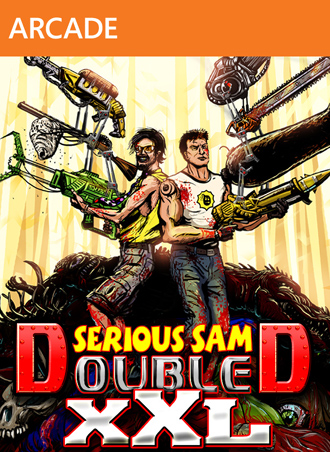 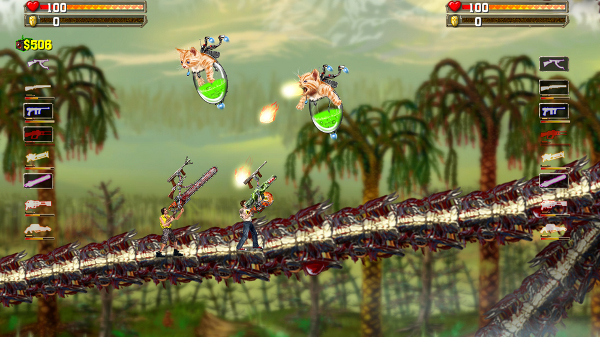 Firing up the Xbox rarely draws a crowd in my house. Most of my house mates are rather apathetic toward my video gaming hobby. Yet when I turned on Serious Sam Double D XXL they all looked across and stood perplexed for a few seconds by the events that were unfolding in front of them. And then they laughed. Hearty belly laughs. I couldn’t understand what was happening. Didn’t they realise that this was serious? To be fair, Serious Sam is only serious about one thing – guns. When it comes to the plot, characters & villain types however? Not so much. Serious Sam Double D XXL takes the popular side scrolling chapter from the franchise off of Steam and ports it successfully across to XBLA. 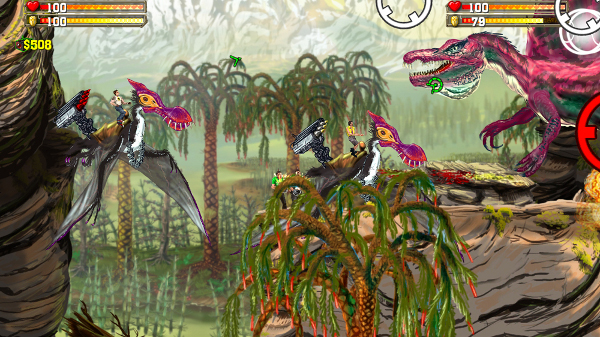 Extra content has been added in order to celebrate the transition. The clincher for this game is the core mechanic: strapping guns on to guns so you can strap a few more guns on top (don’t try to think of a Xhibit joke for that – they already got to it first). In the end you have a game that plays like an arcade classic similar to 1943 on a horizontal plane. Serious Sam Double D is a part of Croteam’s strategy of giving the Serious franchise out to indie developers to extend their universe. They are joined by Vlambeer and Be-Rad Entertainment, who have both done their own spin-offs individually. 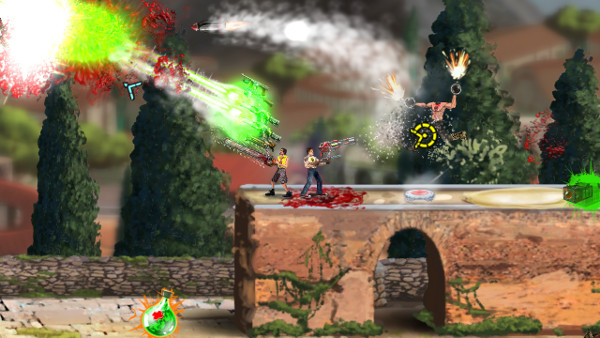 Any one who buys this game for the story is going to be in for a rude surprise. In regard to the rest of the series the plot varies only marginally from the others. The game itself lampoons the inanity of its own plot several times. It whole thing boils down to ‘a horde of bad guys are running at you heaps, they look a lot like your arch nemesis Mental’s creatures, so we should kill them.’ That’s about it. After every level the game’s antagonist, General Maxillia, has a one-on-one with an enemy and hilarity ensues. It’s not side splitting but there are a few grins to be had as you play through the campaign. If you want any more exposition, well too bad, this game is about the guns. 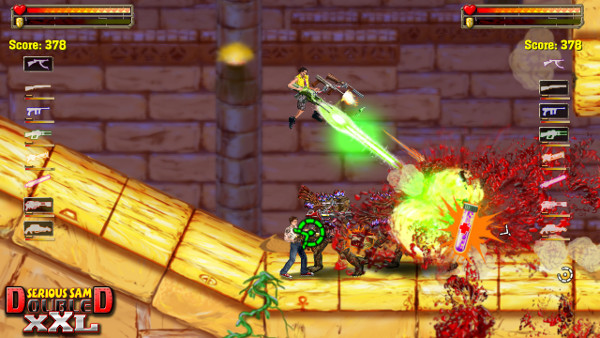 In a word – shooting. It’s a side scrolling shooter that has pretty decent execution but no more than that. If you’re familiar with the series then the enemy types will be recognisable and you’ll know how to react. Beheaded Kamikaze’s will rush you so blast them quickly, Biomechanoids are tanks and need large doses of explosives – there’s little to be surprised by here. It’s all pretty much the same if you’re a verteran, except for the addition of the Vuvuzelator which are about as annoying as their name implies. Other instalments the Serious Sam franchise really emphasised knowing which specific guns were needed to successfully take down enemy types – making huge gun battles frantic. The heat of the moment flipping between guns is lost here and with it much of the tension is gone too. I was actually kind of irked by this. One of the key features of the franchise is the difficulty, making it pop against other shooters that want to emulate war scenarios or throw massive cinematic pieces at you. Serious Sam has always been about the wave. With the focus on Sam so tight, there really isn’t enough space on the screen to get that pulsing, varied attack pattern. Half of the issue is that, as a side scroller, you’re missing a whole dimension to attack on. Yet, it does feel like the only way they’ve tried to include this mechanic is by synchronizing the enemy dumps. It works to an extent and that’s all I can really say for it. 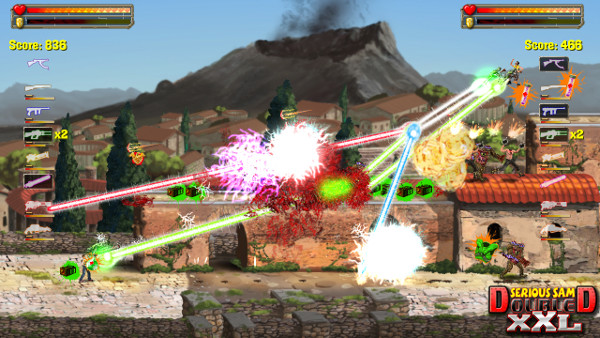 Oh. My. God. I can’t believe I got this far into the review without detailing the Gunstacker. Achievements like this are the reason I play video games; to get that perfect blend of the awesome and the absurd. Fitting perfectly with the famously ridiculous tone, the core motivation in playing this game is getting more guns to strap to your guns. Throughout the game you can find hidden Gunstack Connectors, which allow you to join weapons in your arsenal to others. Add the individual upgrades for each weapon and you have a massively customisable roster of guns. Changing weapons around is a joy, if only because of the total ridiculousness of the whole affair. There’s something Macgyver-esque about the look of it. As if Sam had just got duct tape, haphazardly joining whatever weapon he could find together in a fit of desperation. The game gives you a few tips about good combinations but the core rule to remember is that explosives are for big dudes and the rest are for small dudes. Weapons like the chainsaw and the flame thrower have more practical applications than putting them to use purely for killing. Don’t avoid using them to kill though, burning and slicing stuff is one of the more visceral experiences the game offers. They also play well for when the rush is getting a little too close for comfort. Once you’ve got more than one complete gun stack and a few weapon upgrades the game devolves to a point where you’ll rarely struggle to wipe out the next wave. 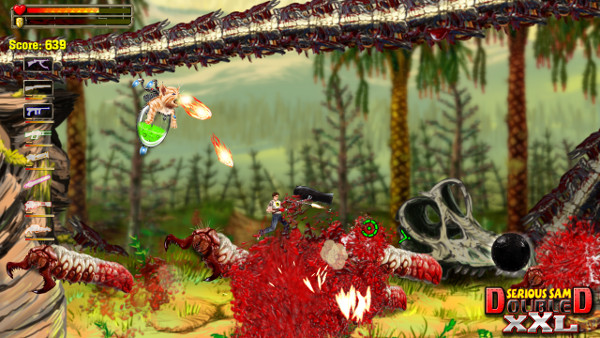 The puzzles aren’t too complicated either but to their credit they’re at least interesting to pull off. You’ll usually be required to do something like slow down time to string together jumps or avoid long strings of death traps. Platforming in this kind of game can often feel like it was included because it had to be. Double D uses these opportunities really well in breaking up the pace. I think I would have been exhausted if it were just a continuous throng of enemies.

Outside of the main campaign there are some awesome challenges. Fighting for leader board positions among friends may become addictive. These levels seem to be far more spatially aware than the campaign missions, fully exploiting the vertical axis in a way that is not really utilised in game. Wave attacks are the more interesting of the challenges that are offered but there is also time trials and kill x dudes within y time courses that are interesting. There’s also a PvP mode which I didn’t get to test out. I fail to see how killing a friend would ever be boring though. 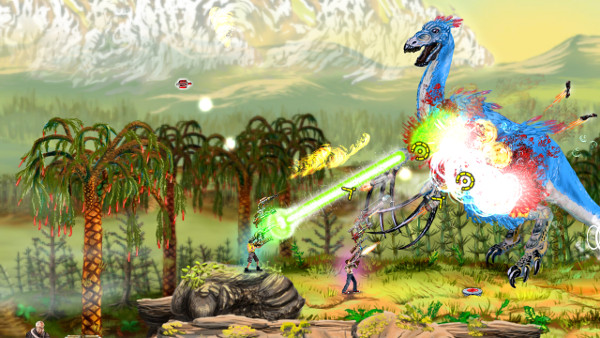 The visuals in this game are freaking ridiculous. The aesthetic is consistent with the rest of the franchise in that it’s insane. From headless bombardiers, cybernetically enhanced flying chimpanzees to cat’s floating in beakers filled with poisonous liquid this game is nuts. This is the only game ever where I turned the parental controls on for blood. With this enabled all the blood is replaced with doughnuts and other delicious pastries. Oddly enough it perfectly matches the tone of the game and I felt it added a nice flavour. There are a few times you’ll lose Sam in the mass of explosions and bodies on the screen but you’ll rarely die as long as you keep holding the trigger. The bright pallet used never lets up, even in the cavernous levels. 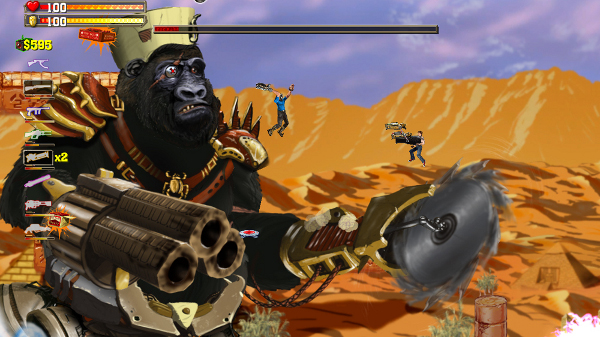 Not too much can be said of the audio. The music suits the frenetic pace the game sets and isn’t all that bad as long as you like video game heavy metal. John J Dick is back voicing Sam but I could help but feel that the dialogue came across a bit flat. That’s not John’s fault, all the characters seem to struggle in pulling off the jokes. Most of the jokes that do work are sight gags and belong to General Maxillia, who has slightly more tonal variance than the rest of the cast. 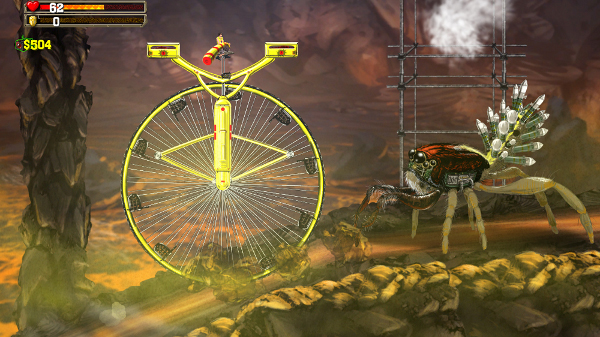 If you like explosions and the idea of strapping guns to more guns you should probably give this a go. It certainly isn’t essential for fans of the franchise but it isn’t unwelcome either. If it weren’t for the Gunstacker then this game could have easily faded into the background. I think if they released a sequel to this that was zoomed out a bit more and refocused on the specificity of attacks then you’d have a really tight mechanic here. That being said there’s tonnes of challenges to unlock so this game has re playability by the bucket load. What can I say? I had a ball just looking at the screen fill with chaos, dealing infinite amounts of damage and watching the bodies pile up. For XBLA it’s hard to ask for anything more than an interest in coming back again and again, which it certainly sparked in me.