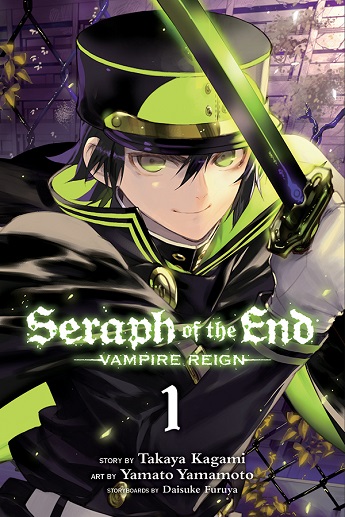 Overview
Vampires are everywhere in the world despite not actually existing. There have been numerous vampire novels and movies and Japan has a certain fixation with creating manga series that either revolve around vampires or have some form of vampire in the plot. As such it takes some effort to stand out from the rest and now that Seraph of the End: Vampire Reign Volume 1 has been released by Viz Media, does this first volume do enough to make this series stand out?

Story
Four years ago sudden virus swept across the world killing everyone over the age of thirteen. As this virus kills every adult on the planet, a mysterious vampiric force appears out of nowhere offering the surviving children a place to stay if they simply obey their orders. Because of this, the children staying at an orphanage end up surrendering themselves to the vampires.

Of these children the recently orphaned Yuichiro Hyakuya had just joined their ranks and became friends with another boy Mikaela. Now four years later Yuichiro and the rest of the children are living in an underground vampire base where they live as something akin to walking cattle for vampires who drain some of their blood every day. While some of the children seem fine with this life, Yuichiro has always been outspoken about escaping and killing every vampire in the world.

With the help of his foster-brother Mikaela the chance to escape from the base arrives, but although Yuichiro and the rest nearly make it out, the young Yuichiro witnesses a horrible sight when everyone he cares about is torn apart by a vampire lord. Only through Mikaela’s sacrifice is Yuichiro able to make it out alive and into the real world which he is shocked to see is still standing. Once outside an elite fighting force known as the Moon Demon Company comes across the boy and offer to train him so he can join their ranks.

After another four year time gap, Yuichiro is still haunted by the memory of his foster-family’s slaughter and has issues obeying orders and working with a team. When his unit is attacked by a demon, he again refuses to obey orders and despite slaying the creature in one stroke, Yuichiro is suspended from the organization and forced to attend a civilian school where he soon finds himself monitored by another member of the Moon Demon Company. This monitor, a teenage looking girl named Shinoa, informs Yuichiro that until he learns to work with others he will not be accepted into the company and this school life is a way to teach him about cooperation.

Considering this is the first volume of the series, Seraph of the End leaves a lot on the table as far as far as development, world building, and even character progression go. This is to be expected a bit since this volume only covers the first three chapters of the manga but at this time all we have learned very few actual details about the world other than the fact that vampires can only be slain by people who have been given a “Cursed Gear,” which is a weapon possessed by a demon that very few humans can withstand.

It also doesn’t help that, while his attitude is understandable due to the traumas he suffered early in life, Yuichiro’s personality is as typical as one comes as he is arrogant, generally unfriendly towards others, thinks with his fists instead of his brain, and treated like a joke by those around him. In fact the only likable character introduced so far is Shinoa as her sharp tongue when dealing with Yuichiro is one of the highlights of the volume alongside the few short action sequences and how dark Yuichiro’s past is presented at the start of the volume.

Artwork
The artwork in Seraph of the End is handled by Yamato Yamamoto who spent a long time doing the artwork for the manga Kure-nai. One of the first things that stands out in the volume is how nicely detailed the various articles of clothing are in the series. From the vampire lord to the members of the Moon Demon Company, their outfits are superb looking and if the quick glance at a full “Cursed Gear” is anything to go by, their weaponry will be just as impressive.

As for the characters themselves, there are some nice designs but very few of them actually stand out at this point, with Yuichiro having a standard protagonist appearance being a bigger disappointment. One thing that is worth noting is that I am a big fan of the way the artist draws each characters’ eyes as well as how their facial expressions are far from outlandish and help convey a characters feelings properly without the need for exaggeration.

Extra Content
With the release of Volume 1, Viz Media is including a ‘Mini-Poster’ that is a little under two manga sized pages in length. This poster features art of Yuichiro, Shinoa, and Yoichi, with all three of them on the school roof wearing their uniforms and Shinoa being the central focus. Along with this poster the end of the volume includes terminology explanations, a few chibi character introductions and an afterward by Takaya Kagami, followed by two 4-koma joke strips.

Overall
Seraph of the End: Vampire Reign Volume 1 starts out dark as it explains the events that led to the current situation in the world as well as Yuichiro’s past but quickly begins to shift tones towards a school setting, albeit one hiding a dark secret that is revealed right in the first volume. With a twist on the final page of Volume 1 and Yuichiro already making progress on his goal, it will be interesting to see how things will progress from here on out, even if Yuichiro himself seems like an extremely cookie-cutter protagonist at the moment.