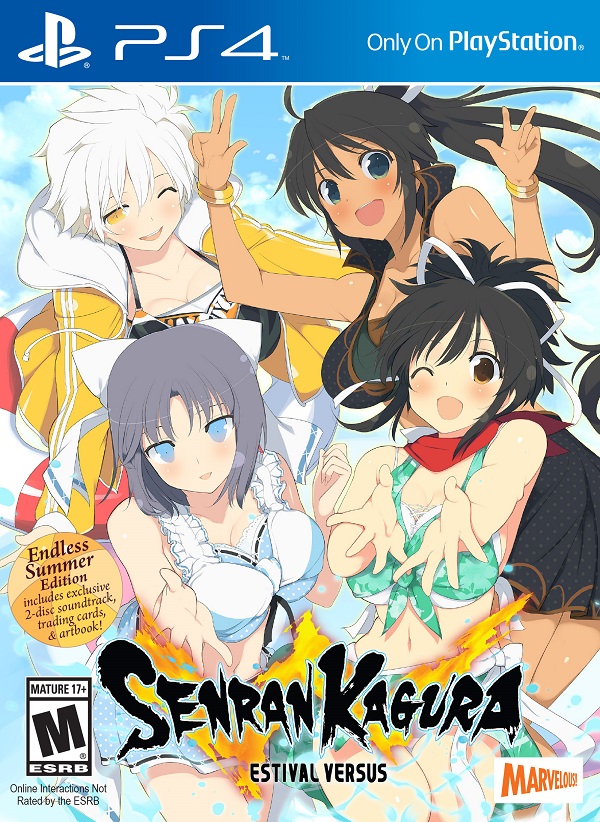 Overview
It is a bit hard to believe that there was a time that the Senran Kagura series was something of an “if” rather than a “when” regarding a Western release. Over the years we have seen every game in the series released without issue and even the anime and manga adaptations have made their way over with little issue. As such with Senran Kagura: Estival Versus being the series’ first step onto the PlayStation 4, hos is the series now that it has arrived on a console?

Story
After sensing a strange presence during a trip in the woods, both Ryōbi and Ryōna find themselves witnesses a strange scene where an old woman is tending to what appear to be spirits of the dead. When the pair see that their dead sister is among the spirits they find themselves transported to a strange summer island and it isn’t long before a strange portal opens up behind the rest of the four main groups in the Senran Kagura series, bringing the members of Hanzo, Hebijo, Gessen, and Crimson Squad all to one location. 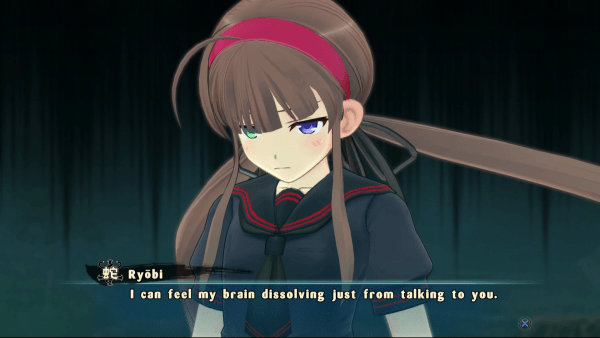 Upon arriving, Asuka realizes that the old woman is none other than her grandmother Sayuri and the group is informed that they have all been transported to a different plane of existence where dead shinobi still roam and that they must partake in the Kagura Millennium Festival with the winning group unlocking the potential to become the “Kagura.” While this may mean that the groups will need to fight against one another in order to destroy Festival Pillars, there are far heavier thoughts weighing on most of their minds as many of the girls can sense members of their family still residing in the land.

This means that there are some serious moments as well as emotional scenes that play out, especially between the three sisters. These moments are handled very well and help set up the baseline for the narrative and the setting. Those who are into the series for the comedic element will find that Estival Versus is more than ready to throw numerous jokes at fans and considering the girls are now in something of a tropical paradise most of the time, there are plenty of fresh jokes to be made and hilarious situations for the girls wind up in. 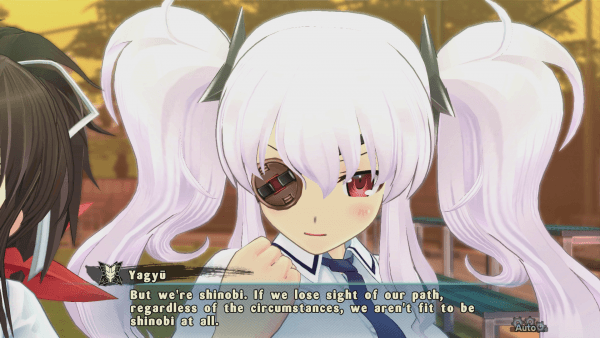 Fans of the cast will be glad to see that each girl is given plenty of time in the spotlight in the core story, especially since the story is told through stages and doesn’t require players to select a specific school, though unlike past games, the Shinobi Girl’s Heart missions that focus on a sole girl are locked away at the start of the game as players first must destroy a certain number of pillars which are often scattered around a stage and off the beaten path, to unlock. As for these little stories, they are fairly standard and provide a bit of extra humor for fans of a specific character but don’t expect too from these little side stories.

Gameplay
In many ways the basic combat in Senran Kagura: Estival Versus remains similar to what fans were able to experience in Shinovi Versus though a few touch ups have been made. In certain stages players can now run along the walls and perform special attacks to surprise their opponents and make combat a bit more fluid and if you are fighting alongside a partner it is possible to turn a standard Aerial Rave move into a Combined Aerial Rave where your character and her partner will double team an opponent. 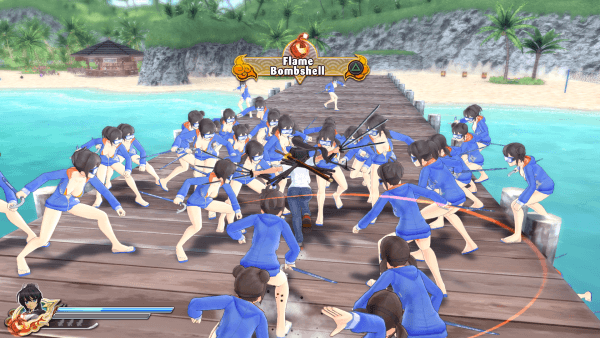 Another lesser feature is the addition of bombs to the game. These bombs are dropped from random enemies as well as from containers and while they don’t add too much to the game, players will find them a great way to clear lesser enemies. By pressing triangle your currently held bomb will be tossed and while they have different effects such as causing poison damage, freezing your opponent, or something similar, there are also dummies that can be spawned to draw attention, healing orbs that can be spawned, and special giant robots called Dolls that can be temporarily ridden to deal massive damage to enemies before they self-destruct.

Outside of these few changes players will find that the characters are all given their standard basic attacks, heavy attacks, and the ability to combo together various strings that can send their opponent flying before pursuing them into the air to unleash air combos. As each girl levels up her combo tree will expand and eventually their strongest special move will be unlocked, costing five total scrolls to unleash after entering Shinobi mode. Frantic Mode also returns and can be triggered through a few button presses or by swiping the touch pad from the middle out and as before this mode strips the character to their underwear leaving them vulnerable but able to attack faster and stronger than before. 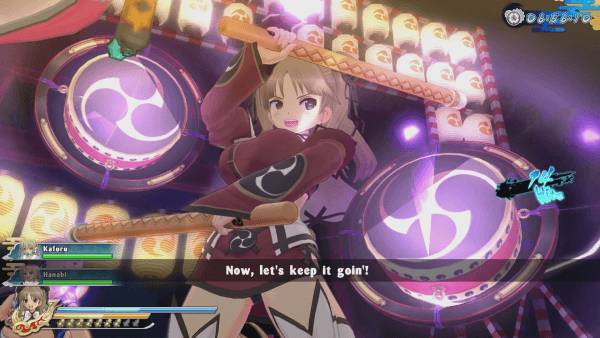 A number of characters have had their move sets refined a bit in this iteration of the series and with this release we also see the addition of a few new fighters to the roster. Despite having so many playable characters now, the developer has done an excellent job making sure that most of these girls all have a unique fighting style and while some characters may not be as effective in combat as others, having the extra options is always a nice touch.

The signature aspect of clothing being torn in combat is still a prominent feature in Senran Kagura: Estival Versus and have been stepped up notch. While players can always opt to skip their transformation and even ripped clothing scenes or select to not have them featured at all, those who wish to see their combo strings rip apart the costumes of their enemies will be delighted to see that the various stages of damage have been varied up a bit and there are now special finishing areas in each stage. 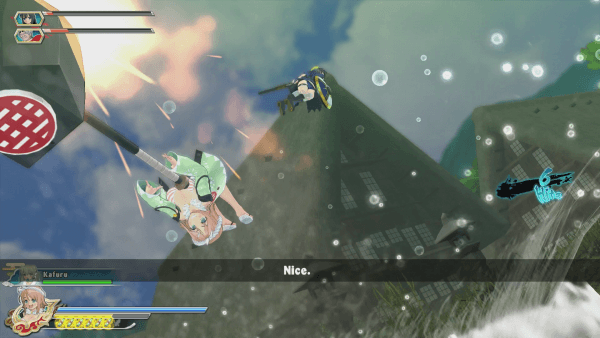 These finishing areas are marked by small ! signs and if you defeat an opponent near these signs they will be stripped bare and sent into a special stage based elimination scene. These are quite funny to trigger though the layout of some levels does mean that there are many times you’ll end up being locked away from these areas or forced to leave them behind to continue. This style of layout also becomes in issue in regards to the aforementioned pillars as players need to often search a level to actually see it and with various routes often being blocked off this is a bit more annoying than one would expect.

Outside of the main combat scenes players will find that the dressing room has been enhanced with a new Diorama mode that allows the girls to be posed wearing clothing that you select for theme like usual and portrayed against various backdrops. The shop is also the same as it features various outfits and hair styles that are unlocked by playing through the game and the Lingerie Lottery that offers random chances at obtaining new underwear for the girls. 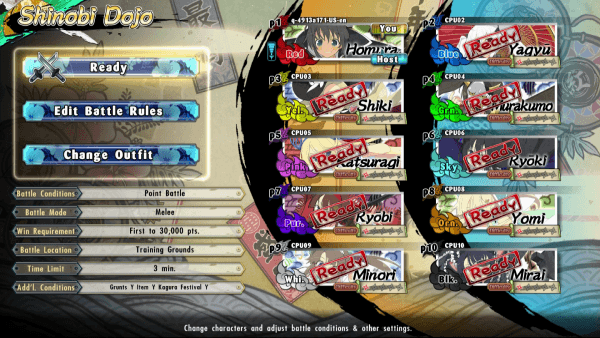 Those who want to take the fight online will find that Senran Kagura: Estival Versus features a number of different modes to try out such as your standard Point Battle to Capture the Bra and Understorm which are basically capture the flag and a collectible hunt for panties. There are more modes than this available though I’ve found these three the most enjoyable and thankfully the PlayStation 4 version supports more players online than the Vita version, allowing the fights to really get hectic at times.

Visuals & Audio
With this being the first time that the series has arrived on the PlayStation 4 it is clear that the company paid extra attention to make sure all of the character models of the girls could look as detailed and colorful as possible. The cast looks better than they ever have in the past and even when fighting against the numerous shinobi grunts the game throws against you, whose outfits rip off just like named characters but without little cutaways, there is never an ounce of slowdown with the title as I found every aspect of the game to run as smooth as possible. 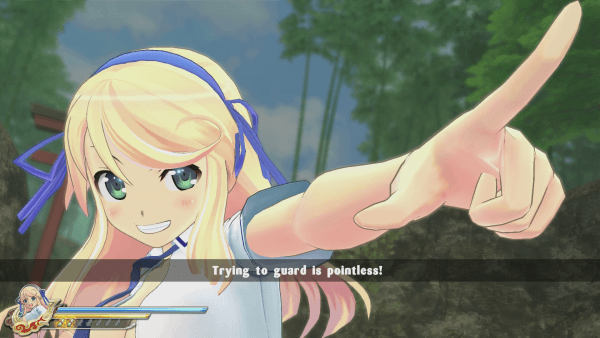 There are a few issues with some random enemies clipping into the ground a bit but these issues appeared very rarely. The fan service aspect of the game has been upped thanks to the aforementioned Diorama Mode allowing for fans to create their own photoshoots as well as the new variations on the costume destruction and special complete stripping environmental finishers. Don’t expect to see anything beyond risqué as the shining lights still cover all the important bits. 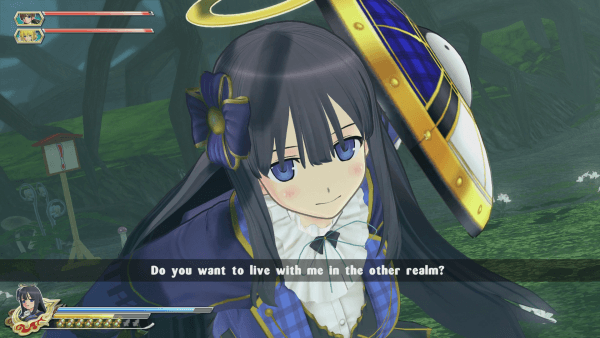 As far as the series’ soundtrack goes Senran Kagura: Estival Versus lives up to what fans have come to expect from the game with a number of rock tracks used for combat scenes and a mix of dramatic tunes and comedic sounding tracks designed to fit the dialogue scenes. The Japanese voice actresses from past games all return to reprise their roles in stellar fashion and the new girls in the game are handled just as well as the core cast though it is worth mentioning that this release only features English subtitles set to the Japanese voice track.

Overall
Senran Kagura: Estival Versus serves as a great continuation to a series that has slowly been getting better as it ages. Although the story may still be filled with plenty of the comedic elements and character interactions that fans have come to love it also tells an interesting story beneath all the boobs and laughs. Thanks to the combat sequences being easy to grasp and as fun as ever, this series continues to show just how satisfying a beat em up can be even when it is a title many might still consider a guilty pleasure.
Capsule Computers review guidelines can be found here.