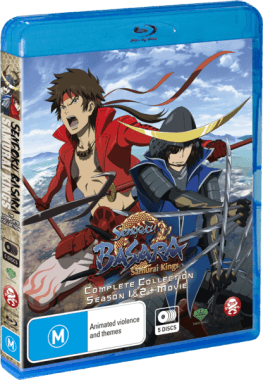 There are a great deal of Anime series’ out there that try their hand at a storyline which takes place within a time in Japanese history where there is a great deal of war, those same series’ try their best to make history seem fun and interesting to the general populous, those same series’ don’t always hit their mark when it comes down to the crunch. It’s only once in a while that an Anime like Sengoku Basara comes around that kicks arse and blows people away.

Sengoku Basara was originally a game, and still is, by Capcom. It’s a hack and slash title that has been brought into the Anime world in a way like very few game-to-anime titles have. After having the two seasons and the movie individually released a while back, Madman has donned their Samurai armour and released the Sengoku Basara Collection which has both seasons of the series and the Anime movie; Last Party (you can read the review here).  Read on to see my full thoughts on this, seemingly, incredible release. 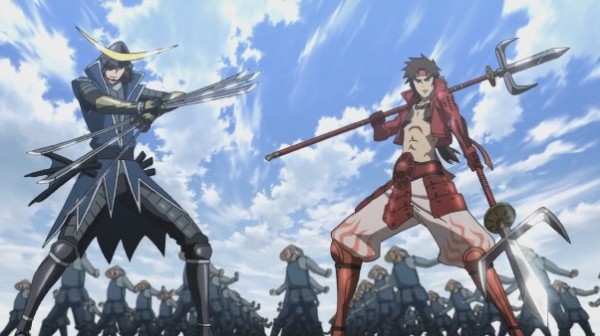 I ask that you bare with me during this part of the review. Considering that this release holds both the two seasons of Anime and the movie, there are three big storylines to cover. I’m going to try my best to supply a general explanation for the entire series without dragging on too much. One thing you have to know about the story behind Sengoku Basara is that it is loosely based around actual events throughout history, more specifically; The Sengoku Period. Real people throughout history are main characters within this series, people like Sanada Yukimura and Date Masamune who just so happen to be, what I would call, the series’ main characters. Season one of the series covers the almost-rule of Oda Nobunaga who sought to unify Japan but not in a way that would seem “appropriate”, he intended to rule with an iron fist.

Within the first series all of the characters are introduced and a lot of the relationships between them are built, especially the one between Date Masamune and Sanada Yukimura. The second series covers the rule of Toyotomi Hideyoshi who is, basically, the next man who intends to do the same as Oda Nobunaga. Within the series he has no real connection with Nobunaga which shows that it is not entirely historically accurate. The movie takes place a fair while after the series’ completion and details the Battle of Sekigahara which is an actual battle that determined the next Shogun of Japan. The two characters most focused on go head to head for different reasons; one intends to unify Japan in a, mostly, non-hostile way whereas the other only seeks revenge for the death of Toyotomi Hideyoshi. 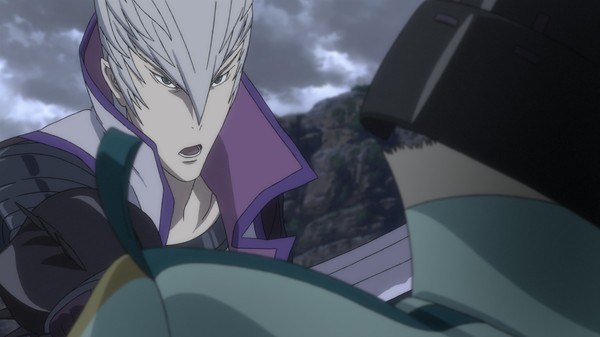 Sengoku Basara does a fantastic job at making an audience grow an interest in Japanese history, I know that is the effect it had on me as I constantly had my laptop on hand ready to search the names of any new characters that were introduced, I also think that adds to the experience of Sengoku Basara. They do say knowledge is power. While the names of the characters are sometimes forgettable, only because they are very traditional Japanese and can sometimes be confusing, the characters themselves are incredibly memorable. They also interact very well throughout the story, each of the characters have a “counterpart” somewhere within another army and it’s interesting to see them interact as the story goes on.

Some would say that the story is incredibly simple, that it is just battle after battle but what they havn’t thought of is the fact that, first of all, it is set in the “Warring States Period” and each part of the story was based on real events. To me the series has done a good job at throwing the history of Japan into the new age and while I wouldn’t study the Anime series as a replacement for school work I would use it as a base for further investigation and research. I’ve seen a few of “these types” of Anime series’ in my time and none do it better than this. 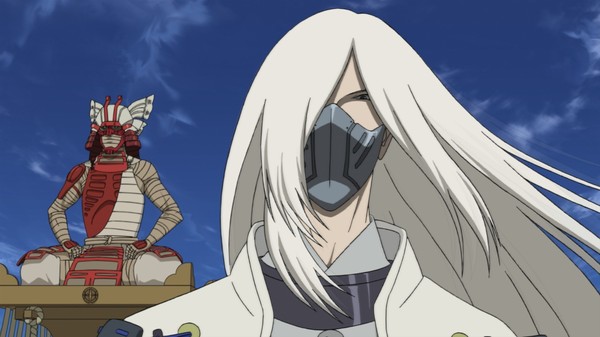 Now while I continuously talk about the historical accuracy I want you all to know that it is only “based” on historical events and, yes, a lot of it is accurate yet the development team did intend for it to be an over-the-top and action-packed Anime so you will see a great deal of flaming swords, ground-breaking screams and even a cyborg with a jet pack. I know it sounds odd but even the cyborg, Honda Tadakatsu, was put in the same position as his real-life counterpart and served under the same man both in reality and within the Anime so they have really done their research and have hit the nail on the head with names, dates, military positions and battles.

I’m no history buff so I can never be 100% certain of all these facts but, as I said, I did do a lot of research throughout my time watching the series. Before you tackle Sengoku Basara I suggest you, one, watch the series all in order because each iteration does follow it’s predecessor and, two, go in expecting an extremely romanticised version of what would have happened back then. Don’t go in expecting it to be a great deal of convoluted story but don’t go in expecting it to be 100% accurate, Sengoku Basara lies comfortably somewhere in-between. 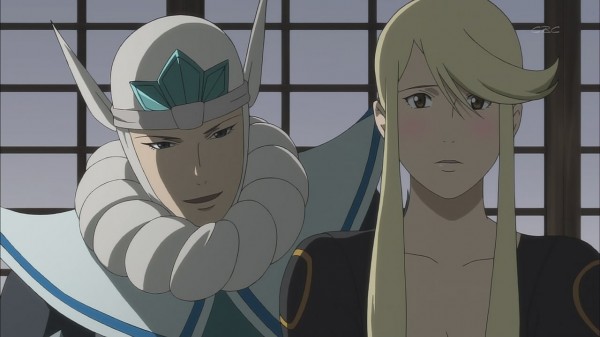 Whenever I speak about good-looking Anime titles from now on I’ll be talking about Sengoku Basara and it’s incredible animation. This Anime is a couple years old yet it looks as good, if not better, than a whole lot of the Anime titles we’re seeing released in the present. Not only does the animation look fluid and fantastic but the motionless backdrops have almost the same effect on the audience as the animation. The fight scenes escalate to such incredible levels and it allows the animators to go wild with their imaginations, between the sparks of two swords clashing and the colourful flames of each individual character, it makes to be visually stimulating beyond believe. Costuming is done in a great way in Sengoku Basara; each army has their own colours and their own small details that seperate them from the others.

The Leaders and the Generals on the other hand are incredibly unique in aesthetics and even in the weapons they choose to use. Armours that look like leather jackets to horses decked out to resemble motorcycles , Sengoku Basara oozes style. This series stands visually in the same way it stands story-wise; some aspects are extremely accurate like Date Masamune’s crescent moon helmet and eye patch and Meiji’s (A vagabond character) Cloud-like buster sword. It all fits in a way that doesn’t entirely seem right but it, kind of, “just is”. Some things do become too over the top but by the time they come along, audiences are already used to the style of the series so it ends up working out in the end. CGI is used throughout the series mixed in with traditional animation yet it is not used enough for one to get annoyed at. It is used more for background characters so as to put the focus on the main head-to-head battle. 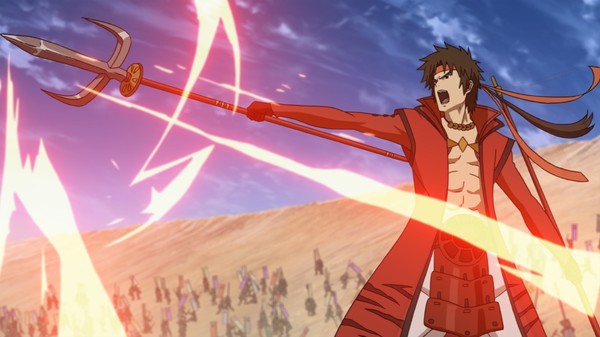 This is on much the same level as every other aspect of the series, especially the voice acting! Sound effects like swords clashing and fires blazing are great and work simply well with the series in it’s entirety but it is not so over the top as to have a bigger mention in the review. What is fantastic is the voice acting in the series, I’ve seen it in both English and in Japanese and the two are, basically, on par. The Japanese does it better than the English for a couple fundamental reasons: One is the fact that the series IS based in Japan so it’s only natural for the Japanese language to fit the series more and two is that, for the most part, some characters are speak quite traditionally and that doesn’t entirely translate well into English, that’s not to say the voice actors are bad, it’s just the dialogue that limits them, fortunately it is only like this for a few character.

A lot of characters speak extremely traditionally yet other say things like “Let’s GUN it!” and some refer to each other “Dude” so it’s not entirely traditional. This relates to what I said above; because all aspects of the series are divided evenly between traditional and crazy, it tends to work extremely well. This is no different for the audio. The music is also quite good and treads those same lines; one moment it could be traditional Japanese music as the camera pans over a landscape and the next minute it could be fast rock music that highlights the intensity of a major fight scene. 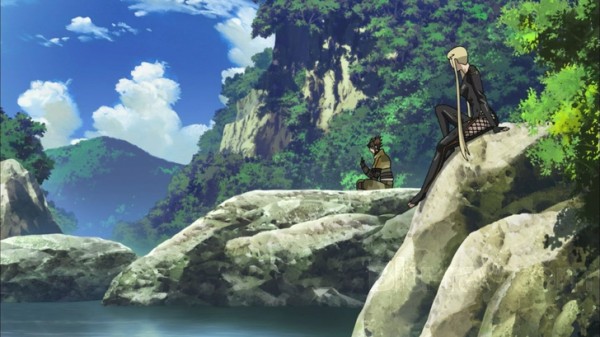 I have, up until this day, never seen a release with more extras than this. It has a fairly long list and the items on those list are quite extensive. Not only does it have a short film about the making of the movie “Sengoku Basara: Last Party” it also has things like “Sengoku Basara II Katakura-kun” which is a short list of even shorter episodes that are done in traditional ink-looking style mixed with that of the chibi style and is basically a light hearted “side-series” to the main series which, although not canon, does prove to be fairly fun.

There’s a whole bunch of episodes which have audio commentary from the cast, two different chibi-style short series’ based off of the main series, a few trailers and commercials both for Sengoku Basara and other Anime titles, text-less opening and closing sequences and a small feature called Four-Panel Theatre: Another Last Party. There’s enough extra content here to keep you going for hours and hours on end, this release continues long after you’ve finished the series so if you do pick up this release I suggest you go through the extras, there’s a lot of really great stuff to be seen. 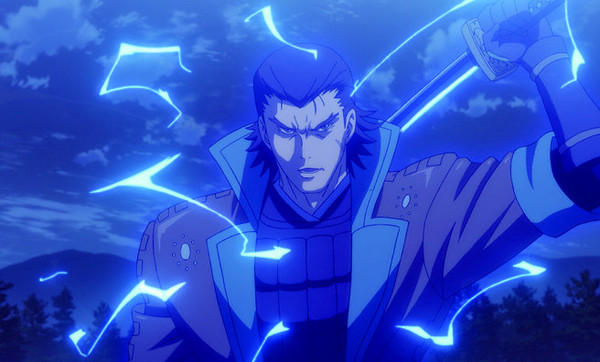 I think that the Sengoku Basara – Samurai Kings Complete Collection is a perfect release. Now obviously this kind of thing’s target audience is fans of Anime so I’m going to speak directly to you here: You will love it! Simple. Not only does it have a nice story and even better characters it also has some of the greatest animation I’ve ever seen in an Anime outside of a movie release like the Rebuild of Evangelion series. There’s so much style to keep you attached to the series and, if I’m going to talk about the release itself, it is well worth the money. I guarantee this Anime will make you enjoy history in a way you probably never thought you could. I would highly suggest it to any Anime fan and, in fact, any fan of Japanese history. It has so much to offer and it is definitely on my list of all time favourite Anime and I think it will be on your list too. 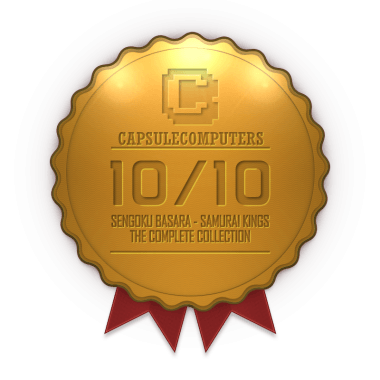